Thanks to the time difference, a few Australian Apple Watch customers began receiving their orders as early as yesterday afternoon here in the United States. Because of this, smartphone website FoneFox decided to put the Apple Watch through a variety of waterproof tests to measure just how much moisture the Watch could take before failing to function. 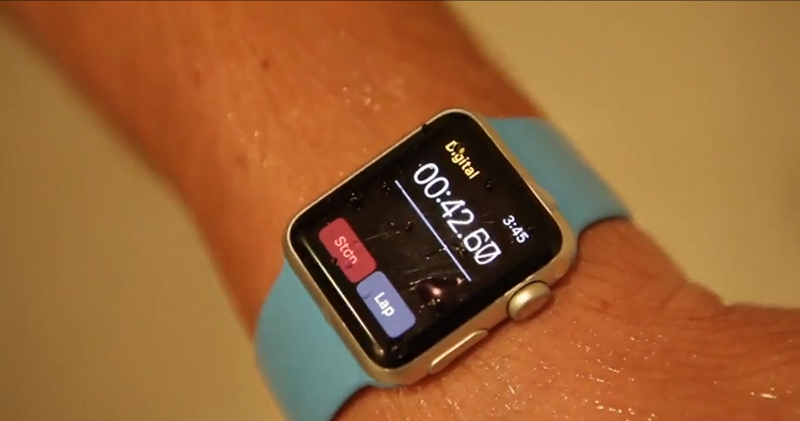 The first test is a basic splash test followed by a five minute simulated shower complete with shampoo and soap, at the end of which the Apple Watch comes out noticeably unscathed and completely responsive to FoneFox's inputs on both its touch interface and digital crown. It should be pointed out that all of FoneFox's tests were completed with a 38mm Apple Watch Sport. Although it's hard to tell how different models of the Watch will size up to similar testing, it's clear after today's tests that most models in the Sport range should see similar results as FoneFox's.

After finding "absolutely no issues whatsoever" with the Watch after the shower test, FoneFox decided to place the Apple Watch Sport completely submerged in a bucket for another five minutes. After the Watch produced similarly impressive results, the website took the device for a swim in a pool. Despite obvious responsive issues when placed underwater, after a 15 minute swim the wearable remained as functional for FoneFox as it was when taken out of the box.

Apple's estimation of the waterproof rating for Apple Watch has most likely been underplayed, as most technology is, due to certain legal and business reasons. The company gave the wrist-worn device a water resistance rating of IPX7, suggesting it to be splash and water resistant but not completely waterproof. Tim Cook even claimed he wore his own personal Apple Watch in the shower back in February, pointing at a better-than-expected waterproof rating for the device ahead of its launch.

Oh! I get it!! That's why Tim is doing this swim move. Showing us the watches water resistant abilities.

Still not doing it.

I've found that Apple products generally do handle water well. Even the iPhone was able to be submerged for 30-45 seconds without and signs of damage.

Check back in a few days.
Give that submerged water time to work.
T

At least I won't feel as anxious if I get caught in a blinding rain storm. Swimming though, not gonna do it.

15 min swim is impressive but won't satisfy the "but I need a watch to survive a few laps across the English Chanel" folks.
P

gsmornot said:
Still not doing it.
Click to expand...

Yeah. Not happening. If it starts to rain, I'm running inside crying.

Having worn a Pebble for over a year, into the shower, I was afraid that I might forget I have the Apple Watch on when I step into the show. At least now I know if it happens and I noticed it, I can quickly take it off and place it to the side with no worries.

I don't care if it is more water resistant than expected. I'm still not doing it.

For one thing, I can't stand the feeling of water underneath rings, bracelets, etc. Ugh.

PS.... Why is the blue sport always the guinea pig? Didn't ifixit use a blue sport too?

Wow, I honestly have to give credit where credit is due. Apple got down with the Apple Watch and the new Macbook. I was blown away by this news and shocked at how small the s1 chip is. I am not interested in either products yet, but one cannot help but admire the engineering of these brilliant products. Great Job Apple....

"Under promise, over deliver."

With everything except pre-orders.

Similar to my Nike FuelBand, it was technically "water resistant" as opposed to "water proof".

Was fine in the shower and swimming for over a year until one day, it had secretly rusted through and then died.

Don't swim with dolphins whilst wearing an Apple Watch.
S

Rogifan will be very pleased to read this!

Traverse said:
I've found that Apple products generally do handle water well. Even the iPhone was able to be submerged for 30-45 seconds without and signs of damage.
Click to expand...

That's what I was waiting for..... I'm going to order right now
J

BCWorld said:
Wow, I honestly have to give credit where credit is due. Apple got down with the Apple Watch and the new Macbook. I was blown away by this news and shocked at how small the s1 chip is. I am not interested in either products yet, but one cannot help but admire the engineering of these brilliant products. Great Job Apple....

Don't expect the new macbook to work so well underwater though

PS.... Why is the blue sport always the guinea pig? Didn't ifixit use a blue sport too?
Click to expand...

I would imagine Apple's legal department has something to do with this.
N

I've got an Airplay speaker set up near my bathroom. Was hoping I could use the Apple Watch to DJ my music while I sing in the shower and control my podcasts. This seals the deal!
D

Under promise, over deliver. Classic (and classy) Apple move.

Rogifan said:
I would imagine Apple's legal department has something to do with this.
Click to expand...

Or you know - under promise and avoid a lawsuit for making a claim that gets tested and fails.

Note I am not criticizing Apple. I just think that most companies would err on the side of caution - especially with waterproofing/electronics. Better to be safe than have products fail - or worse, cause injury.

Good to know about splashing (washing hands, raining, etc) but I can't ever see myself taking a shower or jumping in a pool with a watch on :/