Apple Watch Series 7 to Come in 41mm and 45mm Case Sizes, Will Be Compatible With Older Bands

Apple hasn't released full details on the Apple Watch Series 7 as of yet because it's not set to launch until later this fall, but the new Apple Watch bands that came out today confirm that the Series 7 will be available in 41mm and 45mm sizes. 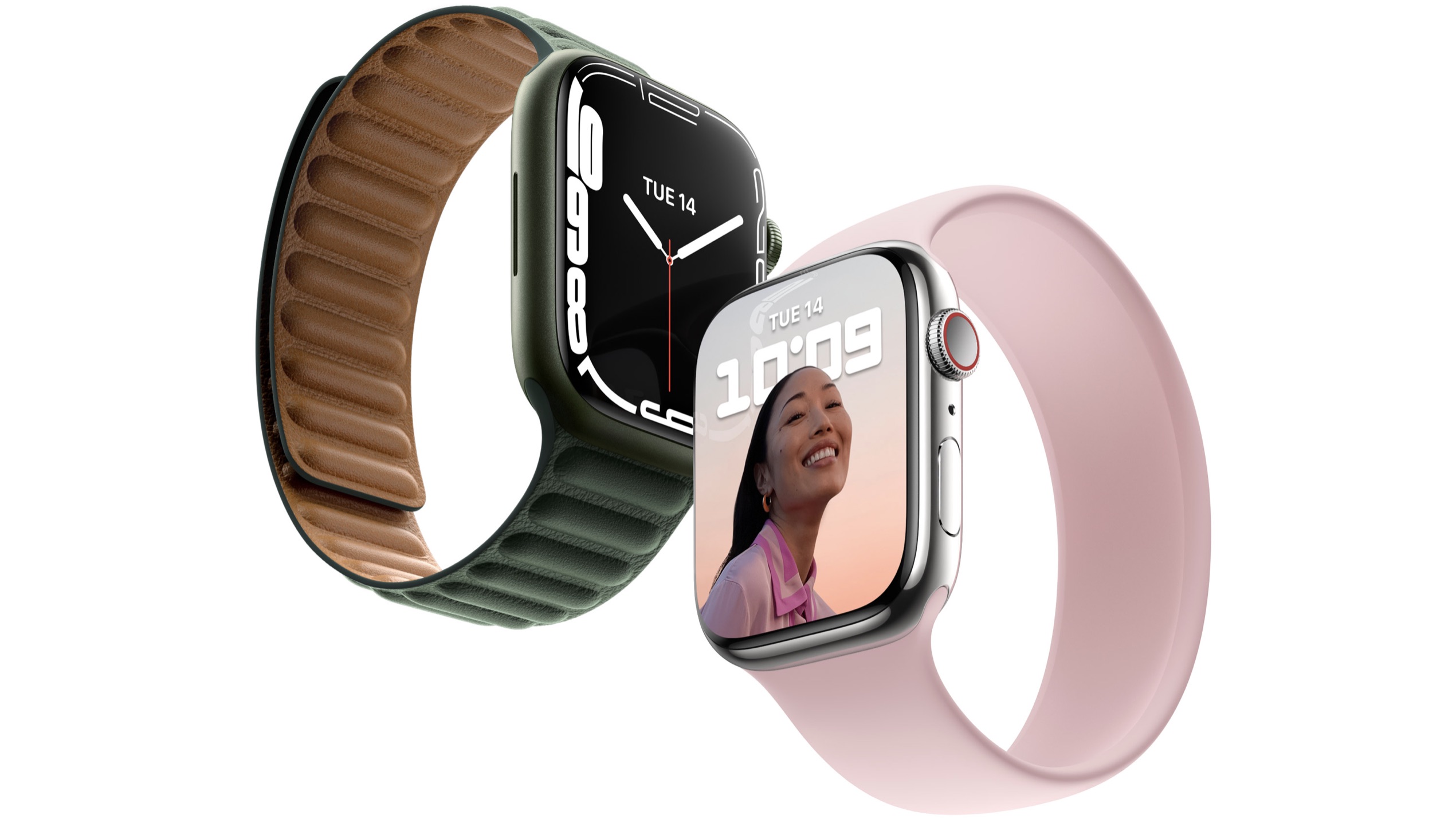 41 and 45mm size updates were rumored, as was the significant redesign for the display, but the design of the Apple Watch itself came as a surprise. Multiple rumors from Jon Prosser, Apple analyst Ming-Chi Kuo, Bloomberg, and other sources suggested the Apple Watch Series 7 would see a flat-edged design similar to the iPhone 12 models, but that did not happen.

The new Apple Watch models have an edge-to-edge display with super slim bezels, best illustrated in Apple's image comparison of the Series 7, Series 6, and Series 3. 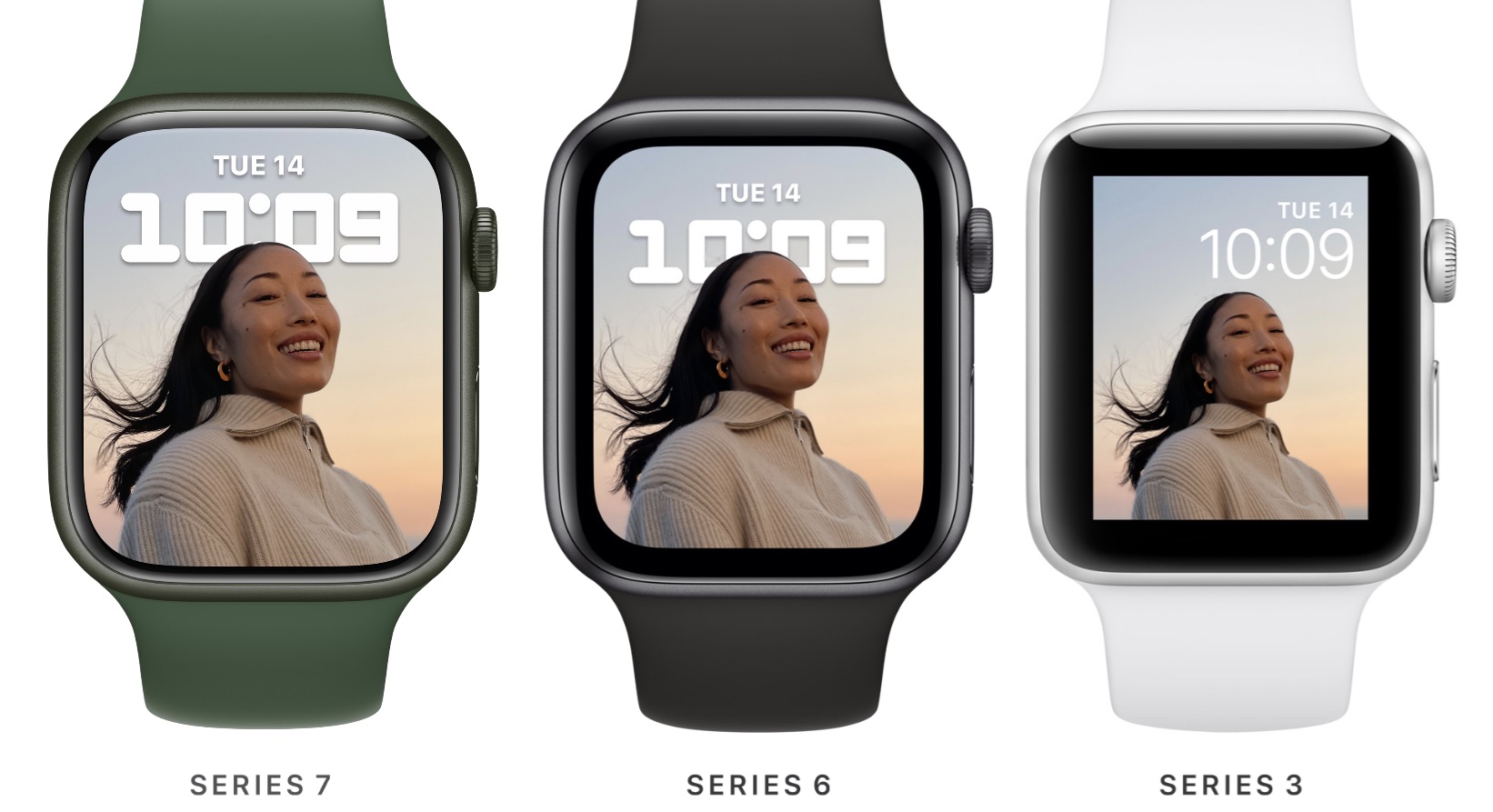 According to Apple, the Apple Watch Series 7 offers 20 percent more screen area than the Series 6 with a 40 percent reduction in border size.

Article Link: Apple Watch Series 7 to Come in 41mm and 45mm Case Sizes, Will Be Compatible With Older Bands

Ya know, my hair not really being blown back with this supposed "redesign".
Reactions: FriendlyMackle, mzubb, TropN and 24 others
M

This was one rumor I totally bought. That the screen upsize would mean the first band "break" in all the years of the Apple Watch.
Reactions: DeepIn2U, Jovijoker, EvvieLynn and 1 other person
S

Was expecting flat edged design. Very suprised that this did not come true. Support for existing watch bands is a great relief.
Reactions: TheYayAreaLiving 🎗, PhillyGuy72, TropN and 19 others
M

jmpage2 said:
Ya know, my hair not really being blown back with this supposed "redesign".
Click to expand...

You aren’t Full Screen Ahead with the redesign?
Reactions: attila, xDKP, szw-mapple fan and 1 other person

Nearly every rumored enhancement to the Apple Watch has turned out to be false.

Pretty much a nothing burger. I might still end up having to get one since the battery life on my Series 4 has gotten pretty bad.
Reactions: gadgetguy11, ModusOperandi, FriendlyMackle and 22 others

I don’t mind, the S7 design is still great even if I would love to see flat design. But no improvement on battery life and no additional health features is a huge letdown
Reactions: gadgetguy11, technole, HopefulHumanist and 14 others

Seems like the screen size it the only update? I will be keeping my S5 a bit longer.
Reactions: gadgetguy11, BvizioN, jwernz15 and 9 others
A

My Stainless Steel black link bracelet that has been on 7 generations of Apple Watch will live on at least one more year. So exciting! IT's an amazing bracelet that I paid way too much for on the series 0 Apple Watch but I've worn it every single day since April of 2015 and only ever had one link fail which was easily replaced with the ones that came in the giant Series 0 box. 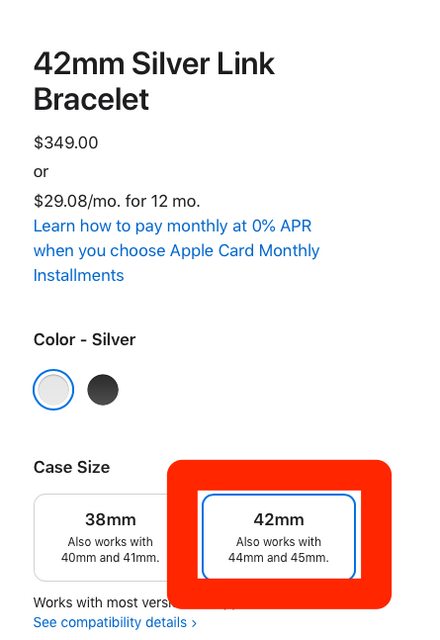 I was really hoping they'd drop the price by now...still charging $450 for the black bracelet.
Reactions: FriendlyMackle, AirunJae, moyjoy and 7 others

Just you wait, next year they’ll boost the screen size by another millimeter and we’ll be back to where we started with 42mm bands.
Reactions: davidako and Moosejaw2010

What intrigues me is how with each iteration of devices (iPhone, iPad and Watch), the screen real estate gets slightly larger and larger, we notice the difference and move on. But a few years later, looking back at the original first gens, the screens look so outdated and clumsy.
Reactions: Analog Kid, ModusOperandi, mjs916 and 22 others
M

Series 3 looks like something from a museum. These square screens... About time we get rounded corners on Macbooks.
Reactions: ModusOperandi, AirunJae, Gudi and 6 others

I like bigger screen. It just looks different. Expecting these to sell like hot cakes!
Last edited: Sep 14, 2021
Reactions: ModusOperandi, Gudi, BvizioN and 7 others
J

how exactly is the green size measured? supposedly 20% larger display but going from 0/44 to 41/45? can someone illustrate?
J

How is there no space grey option in aluminum? Hard to tell what ‘midnight’ looks like. Apple might have finally pushed me to a premium finish.
Reactions: ModusOperandi, DeepIn2U and robotica

I see no compelling reason to upgrade from my series 6, if all that is new is a slightly larger screen. I will gladly wait for next year.
Reactions: BvizioN, Oblivious.Robot, Lemon Olive and 9 others

I’ll sell my AW6 and get this. My out-of-pocket expense won’t be more than a couple hundred bucks plus I get to enjoy that larger screen for a full year. This is why it’s nice that Apple products hold on to their value as well as they do. Makes upgrading that much easier.
Reactions: ModusOperandi, AirunJae, matrix07 and 1 other person

I’ll be upgrading from my series 6 product red for the green.
Reactions: AirunJae and gfourman
M

moonzilla said:
How is there no space grey option in aluminum? Hard to tell what ‘midnight’ looks like. Apple might have finally pushed me to a premium finish.
Click to expand...

So they push the more expensive models
Reactions: ohio.emt
D

The screen is better but not ‘edge to edge’. The black edge dictates the UI design and it will be a real breakthrough when they do eliminate it. Until then I do like the larger screen and smaller edge.
Reactions: ohio.emt
M

The side by side on the first post the black bezel looks tiny on the 7. However during the keynote today it’s looks rather less impressive. 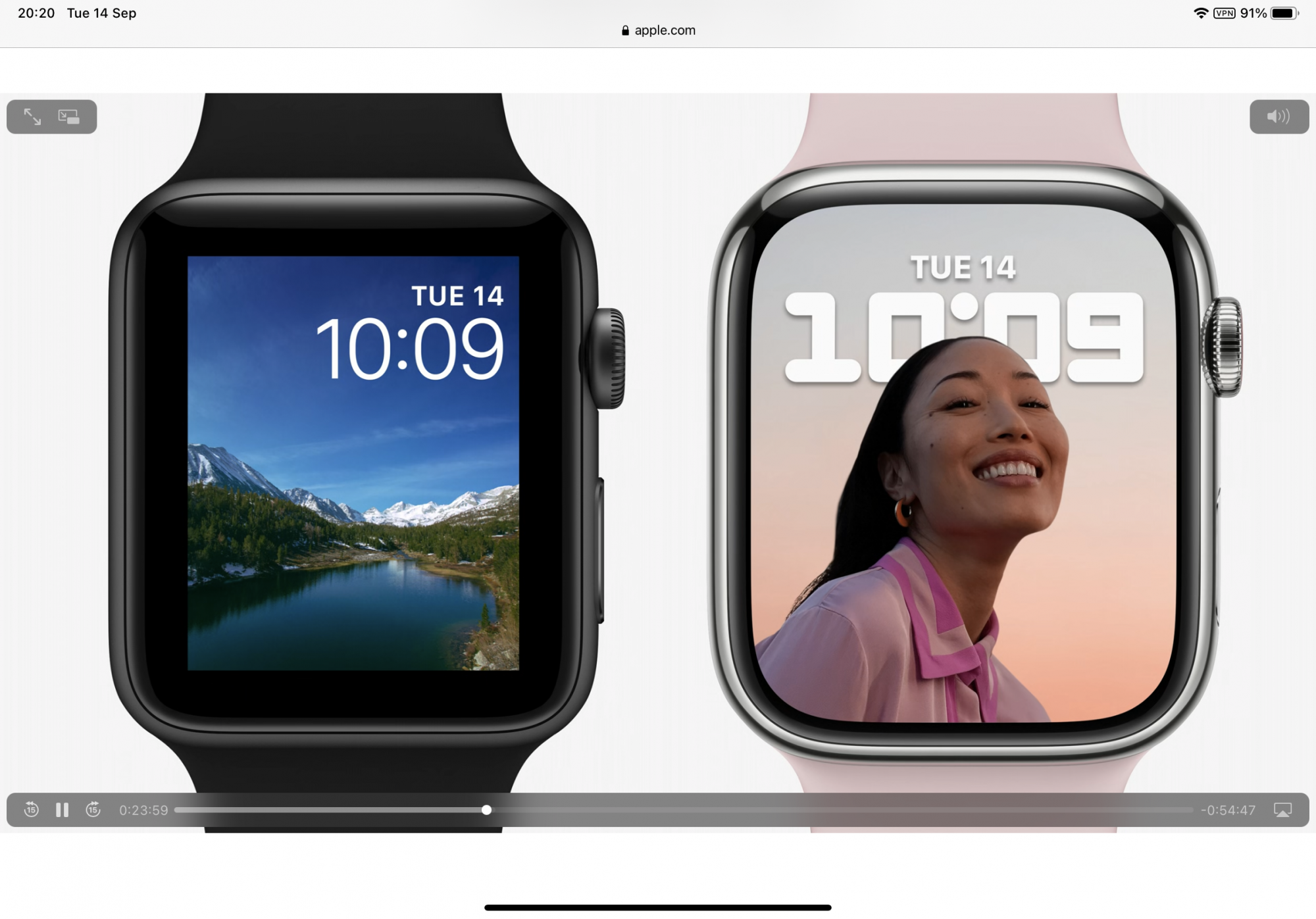 Apple_Robert said:
I see no compelling reason to upgrade from my series 6, if all that is new is a slightly larger screen. I will gladly wait for next year.
Click to expand...

Really there’s no compelling reason to update the watch yearly IMO. I kept my 0 until software updates stopped. I plan to keep my current until the same. Then it feels like an update. Yearly is just incremental usually.

But I’m frugal with all my Apple purchases. Until it significantly changes my use of it I see no reason to upgrade any device.
Reactions: mjs916, lordofthereef, Prince Akeem and 6 others