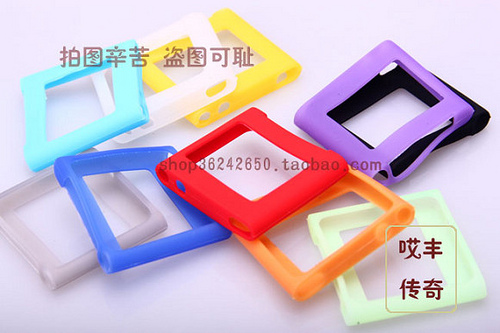 via Micgadget
Apple's September media event kicks off on Wednesday, September 1st at 10 a.m. Pacific. The annual event typically focuses on Apple's iPod line, though recent rumors have suggested that the Apple TV may finally be getting a revision.

Here are the major rumors heading into the event.

- Apple TV - A next generation Apple TV based on iOS, priced at only $99, as well as support for Apps.
- iPod Touch - Backside camera, mic, new shape, front facing camera, possible 3G and even a Retina display.
- iPod Nano - Smaller, square shaped design with a 3cm x 3cm touch screen. Case manufacturers have already been producing covers for the unannounced device (see above).
- Other updates to iTunes including TV show rentals and longer song previews.

Meanwhile, here's a collection of fun speculative content that we can't verify, but in the run up to the event may inspire some interesting discussion:

- iPad 4.0? - We expect Apple will announce their plans for the deployment of iOS 4 for the iPad during the event. It's unlikely Apple will be able to launch tomorrow as Apple still needs developers to update their apps. So, hopefully we'll get a roadmap and a developer beta of iOS 4 for iPad.
- 2.8" iPod touch? iLounge suggests that perhaps we will see the long rumored 2.8" iPod touch emerge to fill the gap left by the former iPod nano.
- iPhone as Apple TV Remote? iLounge's Charles Starrett speculates that the rumored $99 Apple TV might actually require an iOS device to serve as a remote. Beyond his speculation, we'd actually heard unconfirmed whispers of the same, so it seems within the realm of possibility.
- iLife Mystery App is a Make Your Own App Tool? Rumors of iLife '11 suggested a brand new app would be introduced with the iLife '11 suite. We've heard an unconfirmed whispers that the new app could actually be a way for end users to create simple apps and deploy them directly (not through the App Store) to their iOS devices. Is Apple returning to their Hypercard roots? It's hard to say how feasible this would be.

We'll be providing live coverage on Twitter at @MacRumorsLive as well as major updates here on the site. Our main news Twitter feed is @MacRumors. A Spoiler Free page is also available for those who want to watch the event fresh.

I am hoping for an updated Apple TV with support for apps, so many cool things you could do with that!
M

Looking forward to whatever Apple TV updates come about. It's getting long in the tooth and I'm very angry about that.
K

Eh I don't think iPod touch will ever have 3G...

But I wouldn't be mad if it did

The Apple TV is one of (if not the) coolest devices created by Apple. It eats up ridiculous quantities of HD space, but the ability to watch TV shows in HD the day after they hit the market without commercials is fantastic. The integration with other devices on your network is transparent. Everything works and works well.

I know I will not get everything I hope for. All things Apple do not always go the way I want, but they keep getting better.
P

I am sure it is the shuffle.

Looking forward to it, I reckon we will only see iPods. My money is on October for an Apple TV announcement. Perhaps we may see a demo of iOS 4 for iPad but I wouldn't be surprised if we don't.

Retina display, built-in mic, and rear camera on the next iPod Touch and it's going to be a day one buy for me!
M

Why do I keep seeing "Control apple TV with iPhone" being listed as a possible new feature? I already control my appleTV with my iPhone. I must be missing something.

a pseudo Hyper-card app would be AH-MAZING
Even better if it can export to XCode for a developer to refine into a 'real' app.
O

surprising how tight is the secret of the new ipods series as to compare with the leak of iphone 4 before the official announcement. the only hardware leak for the square screen is the photo that appear on the net a few months back but no update since then... ignore those silicon casing photos.
B

What about an application in iLife that allows you to create iTunes extras for your media (audio and video)?

markab said:
Why do I keep seeing "Control apple TV with iPhone" being listed as a possible new feature? I already control my appleTV with my iPhone. I must be missing something.
Click to expand...

I think they are saying, the ONLY way to control it is with an iPhone, iPad or iTouch. iThink that is just silly.
O

i wondering how good is the application on iLife'11 that can create an app out of it... it will be cool!
M

RalfTheDog said:
I think they are saying, the ONLY way to control it is with an iPhone, iPad or iTouch. iThink that is just silly.
Click to expand...

Yup completly ridiculous, if they want to compete in the tv market they can't restrict it to requiring an iOS device to use it. I think that speculation is nonsense.

cinder said:
a pseudo Hyper-card app would be AH-MAZING
Even better if it can export to XCode for a developer to refine into a 'real' app.
Click to expand...

Hypercard was a very powerful system. Many years ago, I built a multi-user accounting system for car dealerships using Hypercard. Record locking was not fun.
B

Some news on an iPhone 3G fix please. I am fed up of my phone turning itself off and struggling to get passed the home screen!

Bentron said:
Some news on an iPhone 3G fix please. I am fed up of my phone turning itself off and struggling to get passed the home screen!
Click to expand...

Have you thought about rolling back to 3.x?
I

I haven't been this excited for an iPod press conference since the first Nano came out.

I'd be happy with a 4.3" touch. The EVO has one big ass screen and I'm pretty fond of it my self. But I do agree theres no need for a 2.8" touch unless its the nano and has no wifi and such, other wise there would be too many ipod touch/ipad like devices around that all serve the same purpose.

The cases are for the shuffle and I'll laugh if the new shuffle colors are those same colors.

One thing is sure, this is going to be a music event. Gathering around the camp fire and stuff

I'm not expecting anything else but new iPods and maybe some news about iPad(s) coming later this year.

The new iPod touch will probably be the only thing that might be interesting to me.

puffnstuff said:
I am sure it is the shuffle.
Click to expand...

i really could see the shuffle reverting back to the square-clip-button form again. when the third Gen was released, the 2nd gen still sold quite well. the current design is restricted to a certain type of headphone or adapter, and it requires a learning curve to use it. now a touch-screen shuffle with a display? it'll be the best shuffle, and possibly best selling iPod ever made.

techapocalypse said:
Eh I don't think iPod touch will ever have 3G...

But I wouldn't be mad if it did
Click to expand...

i agree with you - it's quite a stretch... but what if apple wants to really proliferate the market with iOS4 devices - a 3G Touch would massacre the digital audio player industry. most kids these days don't even use voice - they could use an iPod Touch with skype or Google Voice instead of paying $80/mo for a phone with a texting plan.

and FaceTime? who needs a smartphone?