Apple's notebook shipments, including 12-inch MacBook, MacBook Air, and MacBook Pro models, totaled an estimated 3.3 million in the June quarter of the 2016 calendar year, compared to an estimated 2.5 million in the March quarter, according to new data published by market research firm TrendForce. 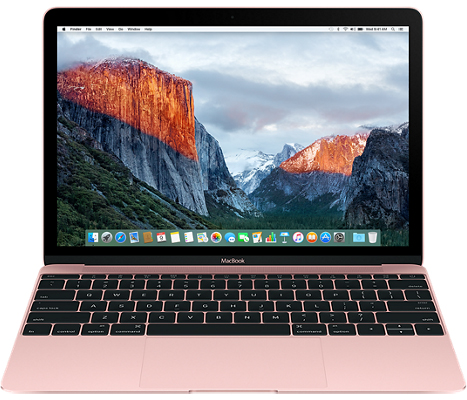 Apple's MacBook shipments in the second quarter were up 30.3% versus the first quarter, placing the brand on the fifth spot of the half-year ranking. This shipment surge was generated by the release of an upgraded 12-inch model of the latest MacBook. TrendForce expects MacBook shipments to register sequential growth in the third and fourth quarter because Apple will also be releasing new products for both periods.
Click to expand...

Apple's notebook market share rose to an estimated 8.6% in the June quarter, a slight rise from 7.1% in the March quarter, as most notebook vendors recorded above-expected shipment results due to arrivals of new notebooks and preparations for back-to-school sales in September, according to TrendForce.

Apple surpassed Acer to become the fifth-largest notebook vendor in the June quarter, trailing behind PC makers Lenovo, HP, Dell, and ASUS, but ahead of Acer, Samsung, and Toshiba. Mac notebooks had estimated 7.9% market share in the first half of 2016 overall, a 23.4% year-over-year decline.

Many prospective buyers are still waiting for a new MacBook Pro, expected to feature a slightly thinner design, faster Skylake processors, Thunderbolt 3 with USB-C, Touch ID, and an OLED-based touch screen strip for function keys above the keyboard. At least one higher-end model is said to have AMD Polaris graphics.

A recent report said Apple has been testing the new MacBook Pro since earlier this year, but it is unlikely to launch alongside new iPhones in September. Apple has hosted October media events in the past to introduce new Macs and iPads, including new MacBook Pro models in 2013 and the iMac with Retina 5K Display in 2014.

Apple officially reported 4.25 million Macs sold in the June quarter, including the iMac, Mac mini, and Mac Pro alongside notebooks.

I'd rather say: on the weakness of the rest of the lineup.
Please Apple, take your time if you must, but don't screw this up.
Reactions: aristobrat, MartiNZ, t1meless1nf1n1t and 3 others

Nice to see a bump in laptop sales. The new MacBook is nice looking and for a non-power user like me would be a good choice. I was tempted to buy one to replace my 2012 MBP, but I just don't like a screen size on a laptop smaller than 15".
Reactions: owleyes

But this was the headline here on July 11:
https://forums.macrumors.com/thread...ion-macbook-pro-and-other-new-models.1982265/
Apple's PC Sales Fall Behind ASUS as Buyers Await Next-Generation MacBook Pro and Other New Models

So Mac sales are up 30% but others are up more? Or this is just guesses and estimates from firms that really have no idea how much of what is sold?
Reactions: Jamalien, Johnny907, Windoes and 3 others

I'd also add that the $100-250 off the MSRP deals all over the place helped their sales as well.
Reactions: Johnny907
Z

Rogifan said:
But this was the headline here on July 11:
So Mac sales are up 30% but others are up more? Or this is just guesses and estimates from firms that really have no idea how much of what is sold?
Click to expand...

Sales started going up mid year because of people buying notebooks for school or uni, that's nothing new.
Reactions: JackANSI, Saturn1217, fluamsler and 1 other person

So basically numbers go up when new hardware comes out.
Reactions: xnu, BigHonkingDeal, JackANSI and 6 others

I'm not really in the market right now, but I gotta say; when I pick up one of those MacBooks on the showroom floor (especially Space Gray), I feel all... you know... kinda funny inside.
Reactions: AngerDanger and aristobrat

I am just waiting for the new Macbook Pro which i think is arriving this year
Reactions: IronH4WK
2

All I can say is that I have high hopes for some really positive announcements starting next month. I have a 2012 imac and 2011 mac Air. Still waiting for Tim's promise of the ipad to be a real laptop replacement. I think until Apple's direction becomes clear these numbers will continue to fluctuate - which is why I am hoping for announcements that give us a clear indication of where Apple is headed. I can still hold out 1 more year, but not much more, so if Tim wants my money they better tell me a good story (and please keep Eddie off the stage).
Reactions: JackANSI
T

bbbb4b said:
I'm not really in the market right now, but I gotta say; when I pick up one of those MacBooks on the showroom floor (especially Space Gray), I feel all... you know... kinda funny inside.
Click to expand...

Same here, me want badly, however I am good at waiting to see what they come up with in their overall line up.

Must be new MBPs though.

Read a few reviews, check one out in the store and then wait until they show up in refurb or eBay at the prices they should be at to begin with.
Reactions: Aston441 and bbbb4b

Q1 2017 will be a record quarter for Mac sales.
Reactions: t1meless1nf1n1t, CarlJ, knemonic and 1 other person

Despite of all efforts Apple did in killing the traditional desktop and laptop market Apple still does 30% better than last year.

Apple, we do need a laptop to build apps for your laptop replacement (or the iPad as we like to call it).

So if you just could release that new MBPr with that sweet OLED touchstrip, that'll be great. Remember we have $5 billion appstore cash to burn.

I'm pretty surprised. I couldn't imagine that many people paying $1300 for a weaker processor and 1 almost unusable port
Reactions: Mal67, JackANSI, vmistery and 2 others

Imagine what sales could have been if Apple gave a damn about yearly refreshes on their computers.

The new Macbook Pro isn't even being announced until Sept. well after back to school season started.

Sorry, but this computer business deserves better than to be a hobby for Apple.
[doublepost=1470839134][/doublepost]

b0nd18t said:
I'm pretty surprised. I couldn't imagine that many people paying $1300 for a weaker processor and 1 almost unusable port
Click to expand...

reason why it's selling well is because Apple ignored the rest of its computer lineup. leaving essentially only this or iMac line getting a refresh.
Reactions: Glassed Silver, fluamsler, Janichsan and 1 other person

The 12-inch MacBook is the nicest notebook Apple has ever made. It has been shunned by people for whom it was never intended, but for >80% of users (those who don't game, use external hard drives, or connect notebooks to 4K displays) it is an awesome machine. Think students, business travelers who access everything on the cloud, etc. Glad to see it doing well, but I do agree $1,299 is about $100-$200 too steep for it.

For people who really need/want a Pro Mac notebook, it seems your long national nightmare is coming to an end by October. Sit tight.
Reactions: Gudi, Keane16, Geurt and 12 others

That pink MacBook is burning a hole in my retinas... Will I ever live to see the horrors of Apple's Easter color collection disappear?

Hopefully this spurs Apple to get back into the Hardware business. In September at the Keynote I want Tim to lead with "We've got a lot of stuff to cover, especially hardware!" There will be cheers from the crowd. Apple should be able to announce new iMacs, Macbook Pros, Mac Pro, Mac Mini, iPads (mini, 9.7" and 12" size as they put the A10 chip into them), and, if they wanted, a new Apple TV to use the A9X chip which would coincide nicely with support for gaming controllers. Oh, and they could also announce a new iPhone. If Apple announced all that stuff it would definitely help deal with issues if there is disappointment in the iPhone release.
W

Kajje said:
Despite of all efforts Apple did in killing the traditional desktop and laptop market Apple still does 30% better than last year.
Click to expand...

Nope, Mac sales are going downwards.
You should read the article and not just headlines.
Reactions: pat500000, mw360 and Mr Fusion

SandboxGeneral said:
Nice to see a bump in laptop sales. The new MacBook is nice looking and for a non-power user like me would be a good choice. I was tempted to buy one to replace my 2012 MBP, but I just don't like a screen size on a laptop smaller than 15".
Click to expand...

I agree, hopefully this will motivate them to really crush out the new MacBook pros and make them awesome.

The only real problem with the new MacBook is that for the exact same price you can get a different MacBook (pro) that is easily twice as powerful. Sure it's thicker and stuff, but the cost/benefit just isn't there for me. That being said my typical computer workload is a little heavier than the average person, which likely is the driving factor in this opinion of mine
M

'Apple's MacBook shipments in the second quarter were up 30.3% versus the first quarter' completely ignoring that shipments are DOWN 24% year over year .
Reactions: GubbyMan, motulist, JackANSI and 4 others
You must log in or register to reply here.
Share:
Facebook Twitter Reddit Email Share Link
Register on MacRumors! This sidebar will go away, and you'll see fewer ads.
Sign Up
Top Bottom