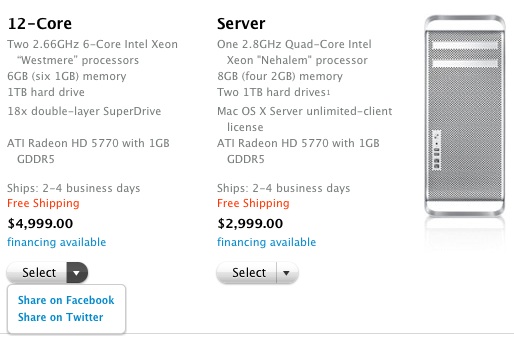 Following today's mysterious downtime for Apple's online stores, users have been scouring the store pages to look for any changes. While the store remains largely unchanged with no major new product offerings, Apple does appear to have made one small change to its Mac Pro model selection page, changing the "select" button for each model into a combination button with a drop-down section allowing users to post a link to the configuration to Twitter or Facebook. 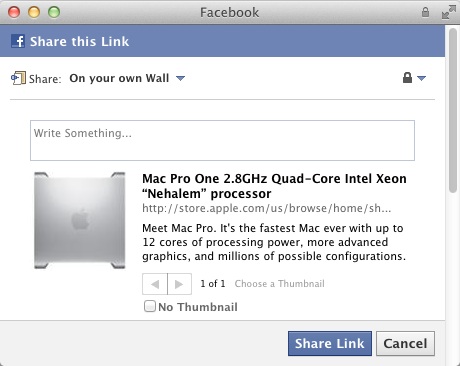 Clicking on the options allows users to customize the postings on either service. 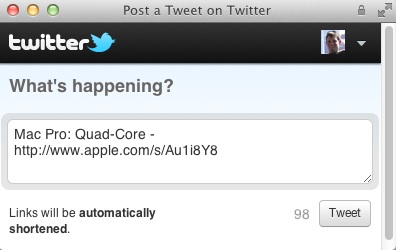 Curiously, the addition has not yet made it to the product pages for Apple's other products, so it is unclear whether Apple is merely running an initial test of the feature with the Mac Pro or if the incomplete roll-out is due to other factors perhaps related to the issues that apparently brought the store down entirely for several hours earlier today.

Apple has been gradually building social feature, primarily linked to Facebook and Twitter, into its offerings for some time now. One of the earliest and highest-profile additions came in the form of sharing options in the iTunes Store, launched with iTunes 9 nearly two years ago.

Sounds like a pretty pointless feature to me.
S

F' everything about this.
S

Where is the Ping integration??

Your Facebook friends: "Why are you telling me this?"

Wouldn't a sunday evening/night be a better time to have the store down for such a minor update?

OH MAN! can't wait to tweet to all my followers!

This is the upgrade everyone was expecting for the Mac Pro this August?

Yeah, this is just for people to advertise on Apple's behalf. I don't see any value in it. So are they going to have this same thing at the end of the buying process so people can brag to facebook/twitter what they just bought? Surely hope not.

Where's the Google Plus or Google +1 button


NutsNGum said:
Hey - let's not forget the Lion USB stick that went on there!
Click to expand...

That was there yesterday already, way before the outage. When the news was reported on Macrumors, it was already available on the store.

Yearly update to the mac pro. Thanks apple!

Wow, for a second there I thought they refreshed the MP's!

AAPLaday said:
Wouldn't a sunday evening/night be a better time to have the store down for such a minor update?
Click to expand...

it would have been during the day somewhere even then


btw they seemed to have forgot the +1 for google

iPod Classic has the links to.

They're there for iPod Classic too. Just sayin'

So this is what Social Networking has descended to. Links to Facebook and Twitter as if those timelines aren't already filled with useless web shrapnel.

I guess saying that "Something is seriously wrong" was not good for anything except generating some panic.
9

AAPLaday said:
Wouldn't a sunday evening/night be a better time to have the store down for such a minor update?
Click to expand...

Sunday evenings are supposed to be one of the busiest times of the week for casual browsing and online shopping.
Last edited: Aug 17, 2011
I

Great, now burglars can find exactly the right Mac they are looking for before they break into your home.
Last edited: Aug 17, 2011

Are they still doing that Ping thing? I guess I have never found a use for it.