AT&T and Sprint have settled a lawsuit that Sprint levied against AT&T for its misleading "5G Evolution" or "5GE" branding that AT&T uses for its upgraded 4G LTE network.

A spokesperson for AT&T today told Law360 that the matter has been "amicably settled." Details on the terms of the settlement have not been shared, but AT&T is planning to continue to use its 5GE branding. 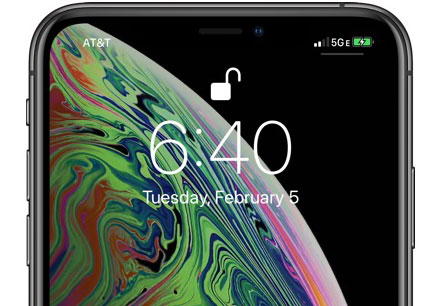 AT&T earlier this year began displaying a 5GE icon on some iPhone and Android smartphones. 5GE is AT&T's misleading name for an enhanced 4G LTE network and is not actual 5G connectivity, which incensed Sprint.

After AT&T rolled out the 5GE terminology, Sprint filed a lawsuit in federal court against AT&T in an attempt to prevent AT&T from using 5GE labeling. Sprint accused AT&T of damaging the consumer reputation and understanding of true 5G and potentially hurting Sprint's planned 5G rollout this summer.

Sprint also took out a full page ad in The New York Times to call AT&T out for the misleading labeling, calling 5GE "fake 5G." From Sprint's ad:

While Sprint is working hard to deliver mobile 5G and the first 5G smartphone in the U.S., AT&T is hard at work trying to convince you that they already won the race to 5G with something they call "5G Evolution." That is simply untrue.

They would love for you to believe they are different ... better. The truth is AT&T is simply offering customers a nationwide 4G LTE network just like Sprint and all the other major wireless carriers. It's not 5G.
Click to expand...

AT&T uses 5GE for its 4G LTE networks that offer features like three-way carrier aggregation, 256 QAM, and 4x4 MIMO to provide faster connection speeds to consumers. These features are in no way limited to AT&T and are offered by other carriers, but no other carrier is using fake 5G branding.

Unsurprisingly, speed tests have confirmed that AT&T's 5GE service is no faster than LTE from Verizon and T-Mobile.

AT&T has defended its 5GE branding by calling 5G Evolution "first step on the road to 5G" and by claiming that customers "love" the 5GE branding because they "want and deserve to know" when "better speeds" are available.

"We understand why our competitors don't like what we are doing, but our customers love it. We introduced 5G Evolution more than two years ago, clearly defining it as an evolutionary step to standards-based 5G. 5G Evolution and the 5GE indicator simply let customers know when their device is in an area where speeds up to twice as fast as standard LTE are available. That's what 5G Evolution is, and we are delighted to deliver it to our customers.
Click to expand...

Smartphones that support true 5G connectivity are only now just beginning to trickle out, and Apple isn't expected to launch one until 2020. No existing iPhone will be able to connect to a 5G network because it requires new hardware.

5G networks from the four major carriers in the United States are going to be available starting in 2019, but expanded coverage and full rollouts will take some time.

AT&T should be sued by actual customers for the misleading labels. Apple should be sued as well for accommodating AT&T on this scam.
Reactions: ThomasJL, jeffirl, Rookbird and 46 others
Comment

Maybe Sprint should save its money for their wireless infrastructure instead of litigating with other companies over a stupid icon.

Yes, 5GE is annoying, but it’s not the first time they’ve done this and they weren’t the first before that (see T-mobile with HSPA+).

The simplest solution always seems like the most obvious. Just create a new badge for LTE-A (advanced) or LTE+ and keep the 5G label pure.

Sprint lost tons with their faux-G (4G) branding back in the day so I can see their point in trying to spread the justice.
Reactions: kironin, drumcat, PimpDaddy and 5 others
Comment

AdonisSMU said:
AT&T should be sued by actual customers for the misleading labels. Apple should be sued as well for accommodating AT&T on this scam.
Click to expand...

Apple probably didn't want to be bothered by ignorant AT&T customers complaining why iPhone is only LTE when their Android friends are on 5GE.

Is there any American carrier who is even close to the 4G hardware up/down limit? If not, then upping that limit with 5G sounds kind of pointless.
Reactions: atmuris, adamdport, poe diddley and 8 others
Comment

Settled... how?
Reactions: Oblivious.Robot, Crow_Servo, jent and 11 others
Comment
C

I speed tested 5GE in DC, and got a whopping 4 Mbps. They should obviously fix the speeds of LTE first.
Reactions: ThomasJL, Will do good, york2600 and 10 others
Comment

What a petulant thing to file a lawsuit over. Sprint would have lost, too. Not sure what they settled for, but presumably not much. I don't know how you prove damages without a 5G network of your own and I don't know how they established standing. Publicity stunt.
Reactions: Ronald Schoedel and s15119
Comment
B

BakaNode said:
The simplest solution always seems like the most obvious. Just create a new badge for LTE-A (advanced) or LTE+ and keep the 5G label pure.

Sprint lost tons with their faux-G (4G) branding back in the day so I can see their point in trying to spread the justice.
Click to expand...

Sprint doesn't have a lot of room to talk with their faux "wi-Max" 4G back in the day.
Comment
M

They gave Sprint money to stay quiet. Consumers still lose on misguided truth.
Reactions: Will do good, motulist, atmuris and 6 others
Comment

I just want my phone to work when no WiFi is around.
Reactions: decypher44
Comment

sprint will do anything to get a mention on macrumors...
Reactions: PimpDaddy
Comment

So basically this was never about Sprint wanting them to stop using the branding and about Sprint getting a payday? If I were every other wireless company, I’d be getting my lawyers together to go get some free money from AT&T. Heck, maybe we should all do this!
Reactions: Crow_Servo, SuperCachetes and tunastink
Comment

Amicably...That's all they're going to tell us.
Reactions: Romeo_Nightfall
Comment
L

It's incredibly stupid marketing. But since ATT wants to play this game with me i've called them like 4 times in the last week complaining my 5g phone wasnt going at 5g speeds and got a reduction on my bill
Reactions: Rookbird, Will do good, jhfenton and 24 others
Comment

Glockworkorange said:
What a petulant thing to file a lawsuit over. Sprint would have lost, too. Not sure what they settled for, but presumably not much. I don't know how you prove damages without a 5G network of your own and I don't know how they established standing. Publicity stunt.
Click to expand...

Any network provider could reasonably claim damage due to migration of their customer base to the only network with “5G”. False or misleading advertising hurts the competition.
Reactions: motulist, Ronald Schoedel, V.K. and 5 others
Comment
K

nekov4ego said:
Is there any American carrier who is even close to the 4G hardware up/down limit? If not, then upping that limit with 5G sounds kind of pointless.
Click to expand...

That's not how it works. There's reasons why performance is limited, say because of protocol inefficiencies, not enough radio bandwidth, signal too weak due to towers being too far apart, too many reflections from buildings, etc.

The goal of newer standards are to perform better given the same situation, by using bandwidth more effectively, using better error correction to handle weak signals, using MIMO to purposely bounce signals, and so on.

Why do americans have to be difficult? Just call it 4G like everyone else - and leave 5G for when 5G is available.
Reactions: Will do good, poe diddley, Commodore 64 and 1 other person
Comment

Guess Sprint got a big load of “go the f* away” cash.
Comment
E

Well, whatever they are doing with law suite, boy when I went into near Seattle, WA area which we rare go into, I noticed on my original iPhone X this 5GE and thought, what the hell is that? Is that like the faster speed than LTE? So I went to my speed test app and saw that it was INCREDIBLY FAST! I mean it was like 160Mbps down and like 30 to 40Mbps up. I'm like daaaaang!!!! Where in some areas, I only get like 15 to 40 Mbps and like 5Mbps up? Sheees, It's like dialup. Yes, I'm with AT&T. So, whatever the naming scheme maybe, it's fast this 5G of sorts.
Reactions: iBluetooth and Intellectua1
Comment
You must log in or register to reply here.
Share:
Facebook Twitter Reddit Email Share Link
Register on MacRumors! This sidebar will go away, and you'll see fewer ads.
Sign Up
Top Bottom