ColorWare today introduced a customized iPhone 7 Plus Retro Edition that resembles the appearance of a vintage 1980s-era Macintosh for $1,899. It is a SIM-Free model with 256GB of storage, which normally retails for $969 in the United States. Orders are currently estimated to ship in 2-3 weeks. 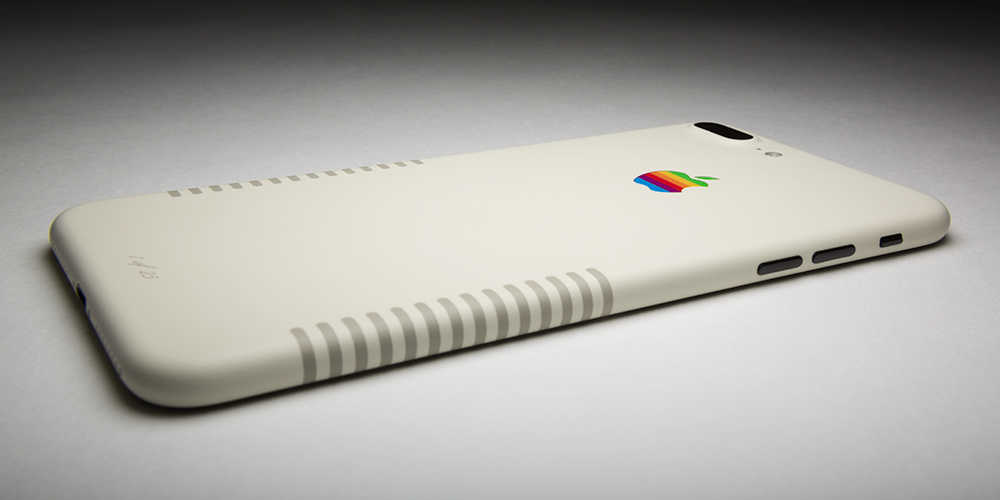 The design includes a multicolored Apple rainbow logo and dark beige edge stripes painted over what is originally a Black colored iPhone 7 Plus. ColorWare said the iPhone 7 Plus Retro Edition will be available for a limited time only, and the first 25 sold will include a number of authenticity.

Details about the customization process:

iPhone 7 Plus Retro Edition includes EarPods, a Lightning to USB Cable, a USB Power Adapter, and documentation in the box.

Looks very nice. Absolutely not worth the price, but it does look very nice.
Reactions: TomaxXamot, Lopov Jack, SeanR1 and 28 others

As the saying goes, there's a sucker born every minute.
Reactions: Jamalien, Bako-MacAddict, Avieshek and 9 others
A

If they wanted to do a vintage Mac, they could have done the Mac Pro.... Although I guess that's essentially Jet Black.
Reactions: npolly0212, Avieshek, Strozzascotte and 6 others

I've always wondered how all these ColorWare things hold up through wear and tear.
Reactions: DEXTERITY and tridley68
M

Seems like you could get 90% of the same look by throwing a $10 case on a regular iPhone 7..
Reactions: Crosslad, ^Tripper^, Bako-MacAddict and 20 others
H

Funniest thing I’ve read in a while. One thousand. Eight hundred and. Ninety. Nine. Dollars.
Reactions: npolly0212, sers, Oblivious.Robot and 8 others

lobbyist said:
I've always wondered how all these ColorWare things hold up through wear and tear.
Click to expand...

Anything painted can be chipped or scratched through.

I'd imagine it probably holds semi comparable to the original paint.

One thing I did like about plastic phones is that they didn't usually show wear marks because the plastic was that color. So the color didn't tend to get damaged.

A phone is a tool. It will get damaged. Why invest additional money into the paint? It's just going to get beat up anyway. Unless you're going to put it in a case (which negates the paint job), or treat it like a delicate flower (which defeats the purpose of having a tool).
Reactions: Black.Infinity, one more, jerry16 and 2 others
T

And that's the style I was saying a year ago should be this year's anniversary edition device. Probably not with the colored apple logo on the back but the colorway would have been perfect otherwise. I would get a wrap or a slim case with this design but I would never buy from these guys to paint something.. prices are crazy!

Totally buying one and throwing a case on it on day 1 to never look at it again.
Reactions: npolly0212, atlas_0, Tycho24 and 2 others
G

Appleaker said:
If they wanted to do a vintage Mac, they could have done the Mac Pro.... Although I guess that's essentially Jet Black.
Click to expand...

I actually like the look - but not for an extra grand....not even close. An extra $50 maybe.
Reactions: ILikeAllOS, t1meless1nf1n1t, mkeeley and 1 other person

I should also add... Anybody remembers Mark (RiP) at GeekTechnique?

He did the original retro iPhone hack ... ten years ago - iPhone year zero.


lobbyist said:
I've always wondered how all these ColorWare things hold up through wear and tear.
Click to expand...

Looks great, IMO. If I were a millionaire, I'd consider it.
Reactions: nburwell and DEXTERITY

michaelant said:
Looks great, IMO. If I were a millionaire, I'd consider it.
Click to expand...

If I was a millionaire, I wouldn't bother with the iPhone at all. I'd let other people handle trivial tasks like answering calls.
Reactions: nwcs and Royal Gala

Apple please copy this idea - or someone give me a winning lottery ticket
Reactions: smacrumon
S

It would be cool if Apple paid some homage to early Macs with a retro iMac or Mac mini.
But they're not big on nostalgia so, it's not likely.
Reactions: atmenterprises
T

GeneralChang said:
Looks very nice. Absolutely not worth the price, but it does look very nice.
Click to expand...

Haha, how many people say that about all Apple products?
Reactions: atlas_0

There are people out there who will pay well over the odds for a limited edition paint job of an existing product.

When Sony released a limited number of 20th anniversary grey-white coloured PS4s, last year, they were trading for 3-5 times the cost of a regular PS4, despite being identical inside.

I won one in a competition and flogged it on eBay for over a grand! Crazy!!

This surely could be accomplished by a really thin case?
Reactions: naeS1Sean

satchmo said:
It would be cool if Apple paid some homage to early Macs with a retro iMac or Mac mini.
But they're not big on nostalgia so, it's not likely.
Click to expand...

shareef777 said:
As the saying goes, there's a sucker born every minute.
Click to expand...

No. Your opinion doesn't dismiss what somebody chooses to do with how their money is spent. And if somebody sees this fit as reformatting their iPhone To resemble a vintage piece from Apple, it's their decision and there is nothing wrong with that.
Reactions: rmariboe, CarlJ, naeS1Sean and 5 others
You must log in or register to reply here.
Share:
Facebook Twitter Reddit Email Share Link
Register on MacRumors! This sidebar will go away, and you'll see fewer ads.
Sign Up
Top Bottom