Yesterday, we reported on Apple's removal of a free iOS app from DriversEd.com that allowed users to create fake driver's licenses on their devices. While the app was positioned as a joke app that would allow users to add funny content to licenses and share them with friends, it attracted the concern of U.S. Senator Bob Casey, who sent a letter to Apple suggesting that the app could be used to support identity theft and underage alcohol and tobacco purchases, as well as compromise national security. 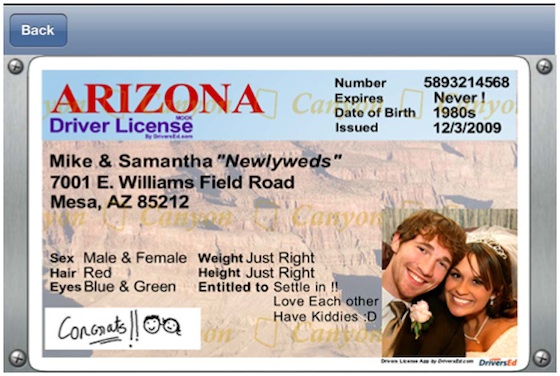 DriversEd.com got in touch with MacRumors about the situation, sharing that Apple did not contact the company until several hours after pulling the app from the App Store. In its communication, Apple simply cited without clarification Section 22.1 of the App Store Review Guidelines:

Apps must comply with all legal requirements in any location where they are made available to users. It is the developer's obligation to understand and conform to all local laws.
Click to expand...

In a press release (PDF) response and an associated FAQ (PDF), DriversEd.com lays out the numerous ways in which the gag licenses produced by the app could not possibly used to generate legitimate-looking fake IDs. Among the most important characteristics are slight differences in layouts, fonts and colors, multiple mentions of the license being a "mock" from DriversEd.com, and a resolution of just 72 DPI.

DriversEd.com specifically and deliberately designed the app to prevent the creation of counterfeit identification. "By design, it would take more effort and expertise to modify the product of the DriversEd.com 'Driver License' app than to construct a counterfeit from scratch," says Founder and Chief Operating Officer Gary Tsifrin.
Click to expand...

Tsifrin goes on to note that it strongly supports Senator Casey's goal of secure identification but that the company's free license app could not possibly threaten that aim. Says Tsifirn, "We hope that in light of these facts Apple will take one more look at the DriversEd.com 'Driver License' app."

Anyone that falls for such a fake ID, on a PHONE none the less deserves, to be fired as a bouncer, bartender or clerk at an alcohol store.

Just move it to Cydia and make versions for Roid. I love Apple, but sometimes their silly political policies get in the way of good old fashion common sense. (which is becoming a super power since its becoming hard to find in people these days)
Comment

Again Senators need to learn what their jobs are and Bob is an idiot who should be fired.
Comment
T

The "newlyweds" on the license look like brother and sister. Check it out: same shape of face; same noses; same mouths. Couples like that are funny and disturbing.
Comment

Front page news? I think not.
Click to expand...

It is front page news because it effects not only this one gag app, but it can effect any app out there. All it needs is a stupid senator claiming it is something potentially illegal without understanding anything (like it this case that this absolutely can't be used to create real looking fake ID's) and Apple being too careful and removing it based on unfounded accusations from stupid senators ...

What is next? Banning Photoshop from all computers? (Photoshop is a by far better tool to create fake licenses)
Comment
B

Dwalls90 said:
Anyone that falls for such a fake ID, on a PHONE none the less deserves, to be fired as a bouncer, bartender or clerk at an alcohol store.

The app maker is right here.
Click to expand...

The app allows you to share (e-mail) the ID around, which in turn means you can print them, which in-turn (the claim states) that the printed version could be a risk to national security. Make more sense now?
Comment
C

zarusoba said:
The "newlyweds" on the license look like brother and sister. Check it out: same shape of face; same noses; same mouths. Couples like that are funny and disturbing.
Click to expand...

They look totally different to me! yeah they both have noses, and a few teeth, but hey!
Comment
D

1) The developer who could now be unemployed, and his/her family.
2) All other developers and dev companies for reasons mentioned by 0815 above.
Comment
F

Senator Casey clearly has too much time on his hands.
Comment
A

zarusoba said:
The "newlyweds" on the license look like brother and sister. Check it out: same shape of face; same noses; same mouths. Couples like that are funny and disturbing.
Click to expand...

They also have two eyes each and each have a forehead. Coincidence? I think not...
Comment
A

I wished I'd had this when I was 16 and trying to score a twelve pack of Old Milwaukee.
Comment
G

Apple has to stop these knee-jerk reactions without as much as consulting the developer. Its irresponsible and disrespectful to users and developers alike.
Comment
D

I hate that Apple pulled an app just because a Senator sent them a letter.

Since when do we live in a country where lawmakers can just order a company to do what they please.

Next thing you know, the President is going to force banks to take loan money then make them pay it back.

brammp said:
The app allows you to share (e-mail) the ID around, which in turn means you can print them, which in-turn (the claim states) that the printed version could be a risk to national security. Make more sense now?
Click to expand...

Low quality prints shouldn't trick anyone - if it does and really effects our national security, than this country has a bigger problem than this app


.. and again: You can get better results by just using Photoshop.
Comment

Really -- posters are defending this app?!

The premise is deeply disturbing, and it is ridiculous to think the average ID check is familiar with IDs from across the country. So the notion that simply perturbing the layouts and fonts is sufficient to thwart misuse... well, maybe that makes sense to a geek, but I doubt law enforcement would agree.

Assuming you don't live in my state, would you be able to discriminate a fake Illinois license from a legitimate one? How about one from Vermont or New Mexico?

This is rediculous. How are most people going to create them? Most licenses nowadays are on plastic with holographic text and designs on them. Dont think there's any printer out there that can mimick. If they're so concerned they'd stop the counterfeiters out of China making ones that look almost identical to the real ones.
Comment
G

We are losing our freedoms quickly now in the US.
Comment
B

As ridiculous as this is, the support in Congress for SOPA and PROTECT IP is a much more serious problem right now.
Comment
1

This is like going after people who make mixtapes for their girlfriends to prevent piracy.

Or banning kids from drinking coke because they could put liqueur in it.

If you think there was any danger of this app being used for illegal activities, you are. a. moron.
Last edited by a moderator: Dec 14, 2011
Comment
A

This App looks sooo stupid. Who would want to create Fake Mockup versions of the DL? Is it soo important that we must inform the millions of Macrumors Visitors... "hey Apple has pulled the Fake DL App!!!"??

But the senator is right, if you take a decently serios pic of yourself, and sign it properly. By pressing the Power/Home key, you can take a snapshop of your image, pass it to photoshop, crop it up, buy an expensive printer that can print out DL's, and TADAAAA... Fake ID.
You could have also done it without the app, but the app makes life a little easier.
Comment
D

This kind of stuff is extremely bothersome to me.

Maybe it's the polite and borderline ass kissing rebuttal from DriversEd.com that these companies feel like they have to put out pleading in the wake of two very disruptive entities eg: Apple and the US government.

It just doesn't seem right that such a big deal is made out of something that doesn't exist, and then ruin the small guy's revenue stream because of the slippery slope or what "could" happen.

And then there's the way Apple is so accustomed to doing business too; just pulling apps? Software that THEY themselves take a slight cut from the sales thereof? Give me a break.
Comment
D

OrangeSVTguy said:
This is rediculous. How are most people going to create them? Most licenses nowadays are on plastic with holographic text and designs on them. Dont think there's any printer out there that can mimick. If they're so concerned they'd stop the counterfeiters out of China making ones that look almost identical to the real ones.
Click to expand...

I have had customers come in with pretty good quality IDs printed on plain paper, and folded up and stuck in a wallet. You can tell it's on paper if you pay attention, which is what you're supposed to do.