Former Apple Employees on Eddy Cue: Siri and Eddy Were 'A Bad Fit' and He is 'Always Doing Too Many Things'

A new profile on Apple chief Eddy Cue has been shared online today by The Information, highlighting Cue's history and leadership at the company, as well as a few of his more interesting quirks. Specifically, the story looks at Apple's services segment -- which Cue oversees -- and some of the missteps it has taken over the years, despite being a consistent revenue earner for the company.

According to analyst James McQuivey, Apple's services business "has been the biggest opportunity that Apple has misspent for the last ten years." Issues include the company's need to play catchup with Netflix, Amazon, and Spotify in streaming TV and music, fading into irrelevance in the eBooks category, and ongoing struggles with Apple Maps and Siri, the latter of which Cue no longer is responsible for. 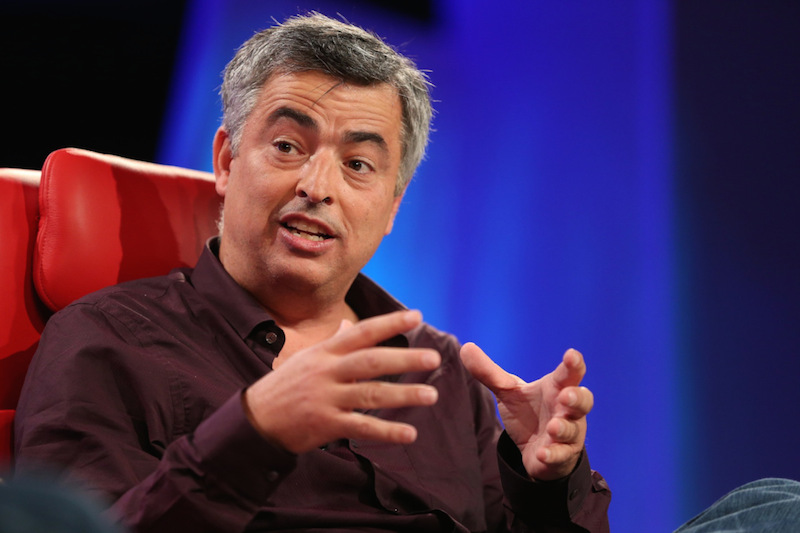 As he looked into Cue's history with Apple, The Information's Aaron Tilley interviewed more than two dozen people who have worked with Cue. While some describe him "as a leader of intelligence and empathy," others say he "seems overextended" and has "failed to intercede in conflicts." Specifically, one former Apple employee gave an example related to the early days of Apple Music, ultimately claiming that Cue is "always doing too many things."

But others who have worked with him say he seems overextended and, at important moments, has failed to intercede in conflicts--for instance, during the creation of the company's subscription music service, Apple Music, when former employees of Beats, which Apple acquired, battled with counterparts at iTunes.

"Apple tries to do too much with too few people," said one former Apple executive, who like most people interviewed for this story requested anonymity to avoid the disfavor of one of the tech industry's most powerful companies. "That sometimes backfires. Eddy is the best example of that at Apple. He's always doing too many things."
Click to expand...

According to former employees, Cue "seemed to lack much interest in [Siri]" from "the moment he gained responsibility." During meetings about technical data for Siri's performance, Cue "seemed to fall asleep in at least two meetings." Siri leadership recently moved to Craig Federighi and is now under John Giannandrea.

"Putting Siri under Eddy was a bad fit to begin with," said one former Siri engineer. "I don't think he ever had a great deal of interest."
Click to expand...

The profile also looks at Apple's entry into streaming music, following former CEO Steve Jobs' derision of the idea of renting music. Apple reportedly "fought tooth and nail" to keep Spotify out of the United States following its debut in Europe, with Jobs going so far as to privately threaten Universal Music by stating Apple would remove its content from iTunes if it worked with Spotify in the U.S.

Following his death in the fall of 2011, Cue decided that Apple had to shift its music business to streaming somehow, ultimately spearheading the largest acquisition in Apple's history with the purchase of Beats for $3 billion. Following the deal, one former Beats employee who joined Apple told The Information that it eventually became clear that "Apple was under-resourced to manage this."

Moreover, the two companies clashed so much about decisions over how Beats Music would transition into Apple Music, "there were almost literally fistfights over design aspects, features, aesthetics," one person said. "They all hated each other." Amid all of this, Cue's leadership style was put into question:

As tensions mounted on the Apple Music team, Mr. Cue, who was known for his hands-off leadership style, was rarely seen by the team working on the project, said people working on the streaming service. "One downside with Eddy as a manager was that it's unlikely for Eddy to mediate between warring factions," said one former lieutenant. "If there were conflicts or tensions between groups, Eddy didn't get involved."
Click to expand...

Looking ahead, The Information says that Cue's "biggest test yet" will be Apple's streaming TV service. In meetings, Cue is said to have discussed the possibility of making the Apple TV app available beyond Apple's own devices -- even on smart TVs and Android -- in an effort to make sure its shows are seen as widely as possible. This also hints that Apple is considering making the TV app the location of its original TV shows, which has been suggested in the past.

The rest of The Information's profile on Eddy Cue is available to read if you have a subscription.

Article Link: Former Apple Employees on Eddy Cue: Siri and Eddy Were 'A Bad Fit' and He is 'Always Doing Too Many Things'

Jack of all trades, master of none?
Reactions: navaira, zedsdead, otternonsense and 21 others

sounds like he wasn't a good manager.
Reactions: c0ppo

he needs to go
Reactions: navaira, TMail, Hank Carter and 24 others

That's why Siri and iTunes suck so bad. He may have too much work!
Reactions: otternonsense

johnyslats said:
Jack of all trades, master of none?
Click to expand...

Cue the Eddie Cue hate machine without any education or skills from the haters to back it all up just perception.
[doublepost=1536164767][/doublepost]

But he's been a manager since 1989 or a few short years after. Look at all the other executives they've hired since then. But yeah he sounds like he's not a good manager.

jetjaguar said:
he needs to go
Click to expand...

seatton said:
That's why Siri and iTunes suck so bad. He may have too much work!
Click to expand...

Says you why?
reasons, evidence to claim that?

Oh maybe you'll place the reason Siri sucked was because he had it for less than 1 year ... but that was Cook's mistake that is BAD leadership.
Reactions: SCARY GAY DAD, MaximizedAction, rafark and 3 others
B

I take former employee opinions with a grain of salt. They've moved on, were let go, or just in general are sour grapes.

I'm not a huge Eddie Cue fan, but we've beaten the Siri topic to death and Apple has definitely not lost out on much because of its perceived shortcomings. See their earnings lately?

My guess is it's going to get a lot better when it needs to be better (meaning it will drive profit).
Reactions: Abazigal, Vanilla35, rafark and 8 others
S

As usual, you don‘t need the skills if you can spend enough money. Especially if it‘s not yours.
Reactions: TMail and killr_b

seatton said:
That's why Siri and iTunes suck so bad. He may have too much work!
Click to expand...

Get your facts right please:

I don't blame you though in thinking that because Macrumors, TheVerge, 9to5Mac and so many other "tech biogs" don't do proper research to source factual and historical data when an article has been written.
Reactions: SCARY GAY DAD, 0958400, vito and 2 others

I read the whole thing. They basically leaked the juicy bits. This stood out to me though:

One such evaluation was a blog post last year by the cartographer Justin O’Beirne, which chronicled in exhaustive detail the richer detail available on Google Maps. The post appeared to rattle Mr. Cue, who ordered changes to Apple Maps to satisfy internal concerns related to the blog post, said a former Apple employee. In June, Mr. Cue publicly promised further improvements to the service. Some observers believe Apple Maps faces a disadvantage as long as the company restricts it to Apple devices.
Click to expand...

So Apple’s improvements to maps are because Cue got spooked buy an internet blog post?

From the moment he gained responsibility for Siri, Mr. Cue seemed to lack much interest in it, according to people who worked on the project. When Siri team members presented Mr. Cue with technical data around the performance of the assistant—an area of frequent criticism of the technology—Mr. Cue appeared bored and seemed to fall asleep in at least two meetings, said a former Apple employee who was present.
Click to expand...

I’ll never understand why Siri was given to Cue in the first place. But it certainly should have been removed from him a lot sooner than it was.
Reactions: navaira, hillsons, asv56kx3088 and 5 others
M

This really is Apple's fault in their management style.

Services isn't a "design" product that works fine with a singular vision. Instead, it's all about labor, and the number of people you throw at it, tackling thousands or millions of tiny challenges.
Reactions: Northgrove and Marekul

His colorful shirts and Eddy Cue are also a bad fit.
Reactions: greenmeanie

"Hey Eddy, I was thinking we could make Siri d--"

Translation: Siri sucks 'cause of Eddy.
Reactions: Rojaaemon and ThaRuler
A

Following his death in the fall of 2011, Cue decided that Apple had to shift its music business to streaming somehow, ultimately spearheading the largest acquisition in Apple's history with the purchase of Beats for $3 billion. '
Click to expand...

Is Cue a Zombie or did he arise from the dead? The proofreading here is sorely lacking. Or maybe his death explains why he has no interest in siri.
Reactions: David G., Cole Slaw, ADudeInBoston and 17 others

He rocked it when he was put in charge of fixing MobileMe. I have never seen a product come together so quickly.
Reactions: Northgrove, DeepIn2U, Gen and 2 others

At first I read the title as "Former Apple Employee Eddy Cue..." and then I got disappointed when I reread it.
Reactions: navaira, TMail, Hank Carter and 13 others
N

Cue and other unqualified Managers survived at Apple because Steve Jobs did all the heavy lifting in decision making. And probably surrounded himself with weaker personalities. When he left, you came to see what type of managers they really were.
Reactions: TMail, Hank Carter, Marekul and 6 others
W

Eddy is not overextended. He's checked out. Think about how many times you've seen him on the sidelines at big NBA games. You don't see all his Ferrari-related activities. He's an avid car guy, in addition to being on Ferrari's board of directors.

Running iTunes meant that Eddy was *constantly* in contact with all the biggest stars in music and movies. Every celebrity who came to infinite loop was there to see him. He's a hyper-rich fame hound who hasn't cared about technology in a very long time.
Reactions: navaira, TMail, Hank Carter and 16 others

RumorConsumer said:
He rocked it when he was put in charge of fixing MobileMe. I have never seen a product come together so quickly.
Click to expand...

That may be, but then Steve Jobs was wielding the whip over his ass.
Reactions: ILikeAllOS, MaximizedAction, panther quest and 1 other person

I am sure somebody else got fired instead of Eddy.
Reactions: Northgrove

keysofanxiety said:
"Hey Eddy, I was thinking we could make Siri d--"