Intel has called on the services of former "I'm a Mac" actor Justin Long in a series of new ads in which Apple's latest custom-made M1 processors are cast as inferior to newer laptops powered by Intel processors. 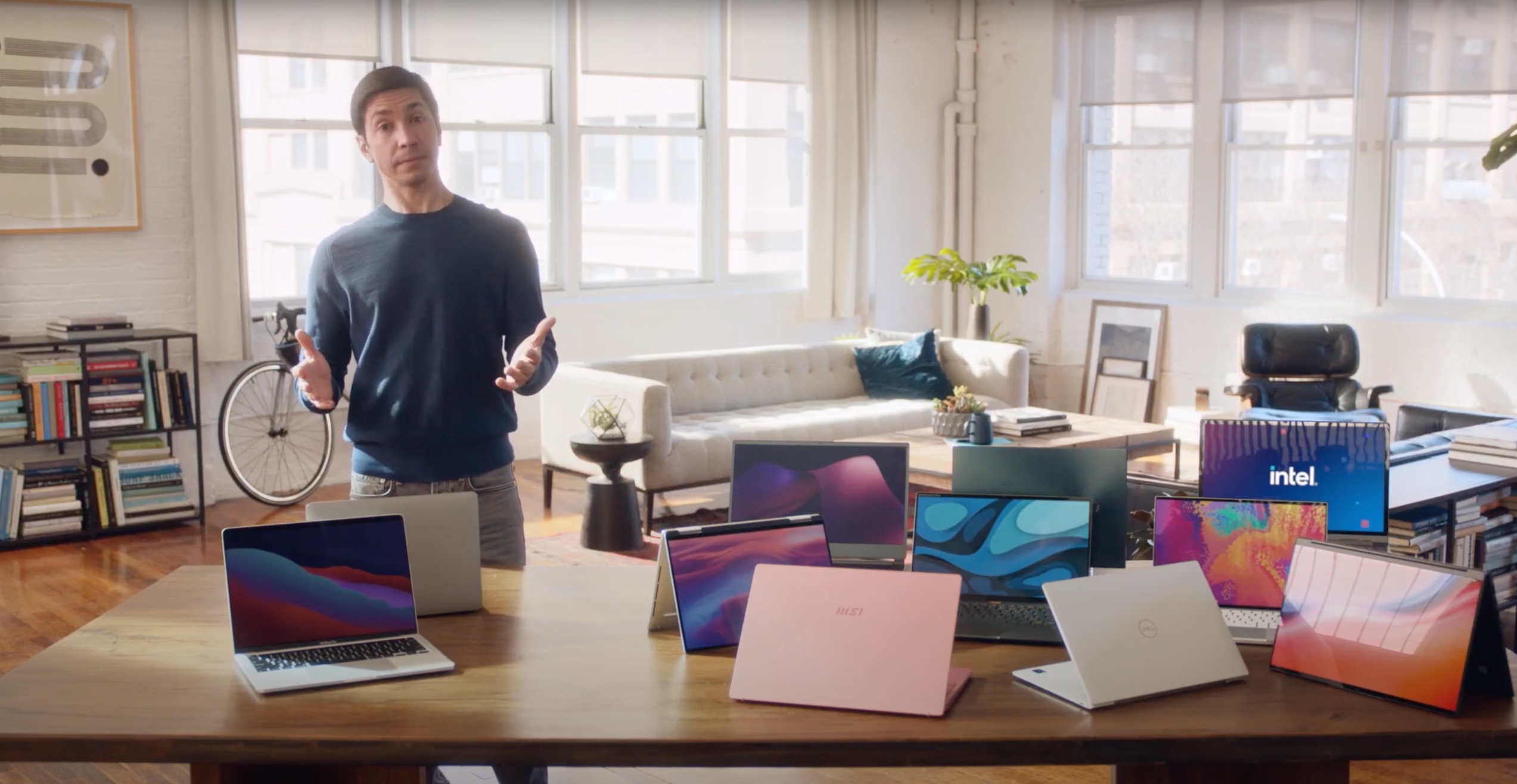 Well known for his role in Apple's popular "Get a Mac" TV ad campaign from the 2000s, Long stars in a series of ads called "Justin Gets Real" on Intel's YouTube channel, beginning each video by introducing himself as "... a Justin – just a real person doing a real comparison between Mac and PC."


In one ad, Long promotes the flexibility of Windows laptops, specifically the Lenovo Yoga 9i versus a MacBook Pro. In another video, Long meets a PC user gaming on the MSI Gaming Stealth 15M laptop, powered by a Intel Core i7. Long then asks for a Mac, before swiftly agreeing with the PC user that "no one games on a Mac."

Other ads include Long throwing shade on Intel's behalf towards Apple's lack of touchscreen Macs, the inability to plug more than one external display into M1 Macs, and the variety of different options available for laptops powered by Intel.

Intel undertook a similar marketing campaign in February with a series of tweets highlighting the "shortcomings" of Apple's M1 powered-Macs compared to Intel-powered computers. In November, Apple released its first Apple Silicon and is expected to fully transition its entire lineup away from Intel over the next couple of years.

This isn't the first time Long has featured in ad campaigns for Apple rivals. In 2017, the actor starred in a series of Huawei commercials promoting the company's Mate 9 smartphone.

EDIT: I get that he's just making a living; so are the folks at Intel.

My point with Justin's flip-flopping is that seems desperate (like when the Verizon spokesperson moved to Sprint; it is hard to tell if the move is genuine in those scenarios.). I have nothing against Justin Long - may he have a long and flourishing career!!!
Last edited: Mar 17, 2021
Reactions: yesyesyes, vito, Apple Core and 138 others

Intel is afraid, and has every reason to be.
Reactions: TropN, frozencarbonite, n0va and 128 others

Intel is so desperate right now ? I wonder how big that cheque was.
Reactions: frozencarbonite, technole, Rivvvers and 75 others
B

The credibility of this ?
Reactions: Wayland128, rmariboe, t1meless1nf1n1t and 21 others

Wow, they're really grasping for straws... Intel really is that far behind, with no hope of catching up.
Reactions: frozencarbonite, Rivvvers, GalileoSeven and 45 others
A

It’s hilarious that they promote features that have nothing to do with the processor. Like a car engine maker promoting the soft material of the seats.
Reactions: Prince Akeem, GonMacNvrGoBack, jido and 176 others

Things like this are why I have trust issues.

Actors and actresses cannot be too fusy with regards to who they work with because it's paid work for them. If Intel are paying him good money to do the advert then all good for him.
Reactions: frozencarbonite, MacRealist91, Rivvvers and 59 others
S

I guess Apple should have paid more to keep him, maybe giving him a salary just to be the exclusive Mac face.
Reactions: MacRealist91, cwerdna, Darkwalker and 23 others
C

I would have never guessed that Intel would stoop this low for a rival chipmaker (and current customer) just a few years ago. It speaks volumes on the importance of leadership.
Reactions: frozencarbonite, clayhalo, GalileoSeven and 15 others

I mean, Justin is an actor. He's paid to do this stuff by whoever pays him. He wasn't doing the Apple ads out of a deeply-felt conviction that Apple deserved and needed his patronage.

It's obviously desperate from Intel yes.
Reactions: escapevelocity, MacRealist91, cwerdna and 61 others
P

Justin should have reached out to Apple and said hey guys, I’ve been offered this much by Intel...
Reactions: kironin, frozencarbonite, clayhalo and 42 others
A

meanwhile Intel is getting spanked by both Apple, and AMD in terms of performance.

give it up Intel, your days are done. Just sell your chip business to Apple.

also, there’s a reason Apple never made a touch screen Mac and they will never will to protect Steve Job’s legacy:
Reactions: aRByJr, frozencarbonite, GonMacNvrGoBack and 50 others

Can anyone really say this advertisement is wrong?

Because it's not. It's 100% accurate. Regardless of the actor.

Anyone that's using Mac knows this is accurate.

I like how one of the first things Intel's new CEO said was how Intel has to be better than Apple, then a month or two later the company gives us anti-Apple slides and ads. They literally just hired the old "I'm a Mac" guy. If you can't beat 'em, join 'em?
Reactions: TraceyS/FL, KeithBN, Jonathan Leclerc and 7 others

Here we go, another microsoft...
Reactions: aRByJr, Rivvvers, Solomani and 11 others