Former iOS chief Scott Forstall gave a rare interview last night at an event at the Computer History Museum in Mountain View, California, where he discussed the birth of the iPhone and his relationship with Steve Jobs.

Speaking to journalist John Markoff after an opening hour with original iPhone engineers Nitin Ganatra, Hugo Fiennes, and Scott Herz, Forstall's appearance was the first time he had spoken publicly since he was ousted from Apple in October 2012, following the botched launch of Apple Maps.

Scott Forstall (right) speaking to John Markoff​
Forstall proved a charismatic storyteller on the night as he discussed his school education and his early career at Steve Jobs' NeXT, before moving on to his work on the first iPhone at Apple. The former iOS chief spoke with genuine warmth about his time with the company, but stopped short of offering any huge revelations, although the audience was treated to a few more details as well as some humorous episodes along the way.

For example, Forstall claimed that before the iPhone was conceived, Jobs had initially wanted a tablet with capacitative touch and multitouch in order to get one over on someone he "hated" who worked at Microsoft.

"It began because Steve hated this guy at Microsoft. That is the actual origin," Forstall said, before adding that it wasn't Bill Gates. After hearing the person boast about Microsoft's tablet and stylus development, said Forstall, "Steve came in on a Monday, there was a set of expletives and then he said, 'Let's show them how it's really done'."
Click to expand...

Regarding the iPhone, Forstall said the idea for the device was initially born when he and Jobs were eating lunch and they noticed everyone was using their phones. "We hated them," he said. "No one seemed like it was a pleasurable thing to use a phone, but it's a nice thing for communication." The episode prompted Jobs to ask the tablet design team to redouble their efforts to perfect multitouch but to miniaturize it for a device that you could put in your pocket.

Forstall also touched upon the concept of skeuomorphic design, claiming he had "never heard of skeuomorphism" when he was working on iOS and that it sounded "unnatural".

"When I look at design - when I look at good design - it's approachable, friendly, you can use it without a manual. It's fun. We talked a lot about photo-illustrative design. It was infused into the design sense of Apple by Steve Jobs since the original Mac. We used these design philosophies. It doesn't mean we loved it, or loved every single part of it. We know it worked. How do we know it worked? You just have to watch people use it."
Click to expand...

Elsewhere, Forstall chose to highlight the many emails he received from customers explaining how the iPhone and iPad had changed and even saved lives. One email was from a 100-year-old woman who had been an avid reader and writer all her life, before age had made these pastimes impossible. The iPad bought for her by her family had allowed her to take up reading and writing again, long after she had all but given up hope.

Forstall also spoke touchingly about his friendship with Jobs, including the time when Forstall contracted a rare and potentially lethal vomiting virus which left him in hospital for months, before the late Apple CEO arranged for an acupuncturist to treat him. After two sessions, Forstall was discharged from hospital and went on to make a complete recovery.

Forstall shared a particularly funny anecdote about how Jobs insisted on paying for both their lunches at the Apple cafeteria, despite the fact that the $8 meals were charged against staff paychecks with each scan of their badges, and as CEO, Jobs only got paid a dollar a year.

Lastly, Forstall said he is not currently developing technology himself, and will continue his work in an advisory capacity. You can watch all of the interviews on Facebook.

Where's the video, why not embed it into the article?
Reactions: navier, Avieshek and AmazingRobie

Forstall really likes striped shirts. He wore one for the intro of iOS 6 very similar to the one he has in the picture.
Reactions: DJ_S, 0958400, recoil80 and 5 others

MacRumors said:
Forstall contracted a rare and potentially lethal vomiting virus which left him in hospital for months, before the late Apple CEO arranged for an acupuncturist to treat him. After two sessions, Forstall was discharged from hospital and went on to make a complete recovery.
Click to expand...

Wow, talk about lucky timing.
Reactions: 123, iObama, haruhiko and 2 others

"After hearing the person boast about Microsoft's tablet and stylus development, said Forstall, "Steve came in on a Monday, there was a set of expletives and then he said, 'Let's show them how it's really done'."
Click to expand...

Microsoft had the run of the park from 2002 to 2010 with their Microsoft Tablet PC specification, and yet their current Surface tablets owe almost everything to the iPad.
Reactions: xerexes1, tongxinshe, Internet Enzyme and 8 others

Surprised hes doing nothing other than advising. he certainly must get lots of offers to do things. He seems more humble than the descriptions implied around the time he was fired. Maybe like steve Jobs after he was fired, he needed a "kick" to grow into an executive. Or he could just be good at press stuff now
Reactions: Alfredo_Delgado, Feyl, jamesnajera and 7 others

I have never heard of a rare and potentially lethal vomiting virus in the USA before.

I'm at a loss to figure out how acupuncture could help, but I guess don't knock it til you've tried it.

Well it sounds like he had some good tales to tell. I'm recovering from a thankfully non-vomiting virus myself so I will track down the video when I am feeling up to viewing it.

I wish he could come back to Apple just to see where he could take things now. But I suppose he would not fit in with Tim's Apple.
Reactions: Feyl, Avieshek and Col4bin
D

Scott come back for iOS 12 and all will be forgiven !! Scott and Craig doing an iOS demo would be awesome! Tim make it so...
Reactions: sracer, 0958400, Feyl and 8 others

That makes no sense...How are you comparing software released in 2012 to software in 2017? Obviously the 2017 versions are more feature-rich and refined. You're acting if Scott was still at Apple that iOS wouldn't have evolved at all.
Reactions: sracer, 0958400, ThomasJL and 37 others

GrumpyMom said:
But I suppose he would not fit in with Tim's Apple.
Click to expand...

From the anecdotal stories I read online, Tim and Scott were not quite simpatico.
[doublepost=1498048773][/doublepost]

You have me beat! (iPad 2 running iOS 7.)
Reactions: brendu and GrumpyMom

Actually... I say the company should fire Tim and Ive. Put Craig and Scott in charge. Phil and Eddy can stay if they fall in line.
Reactions: R2FX, 0958400, Internet Enzyme and 7 others

I watched this interview last night on Facebook. I was about to go to bed at 11:34 PM then someone tweeted the link to the live stream recorded and I had to watch it. The first part featured two software engineers and a hardware specialist who worked on things like radio. For the most part, it was good, but the second hour with Scott was the best. Scott is such a funny and witty guy. I don't know why he didn't just apologize over the Maps fiasco and moved on. He really should have still been at Apple.

He and Steve had a really close friendship at Apple and I think the death of Steve affected him deeply. Take into account, both had lunch every Tuesday, Steve even bought his lunch (which cost $8). He even saw him up to his last days. So, I think he kinda lost interest because part of his motivation for working there wasn't around anymore. He even said Steve saved his life when he battled a rare flu virus. One of the funny memories he mentioned about Steve was over the pricing of a product. Scott wanted a reasonable pricing, while Steve was going to high. Scott insisted because he has family and friends who can't afford this; you are a billionaire, he said. Steve responded "a multi-billionaire". Steve ultimately won.

Its worth watching all over it, but I would suggest watching Scotts part first then the first part after.
Reactions: sracer, geekon2wheels, ErikGrim and 11 others
E

They are very different from what I've heard. For one, Scott was a product guy.
Reactions: 0958400 and navier

He would have been a better CEO than Tim I think. BUT His failure to admit to mistakes got him fired.
Reactions: 0958400

mostly useless now. But I leave it in the car for my offline music while driving (if need be). Also while in the driveway, downloads emails via wifi, and my car can read iOS based emails for some reason
Reactions: Col4bin
J

I didn't like the look of iOS when Forstall was working for Apple, but I also hate that whitespace, big font designs they are working on now. Could someone also explain why i'm still looking at a grid with app icons? If the iPhone 8 is going to be 5,8-inch, i'm pretty sure they will add another row.
S

The key to Apple's success?

Still not in the gloom-and-doom "Jobs-gone, no-innovation at Apple" camp, but we've lost that marvelous, imaginative, wildly creative, and functional interplay.
Reactions: hawkeye_a, Lopov Jack, Avenged110 and 7 others

FSMBP said:
That makes no sense...How are you comparing software released in 2012 to software in 2017? Obviously the 2017 versions are more feature-rich and refined. You're acting if Scott was still at Apple that iOS wouldn't have evolved at all.
Click to expand...

I can't speak for Dreamer2go, but wasn't Scott a big supporter of skeuomorphism? While some people like it, others hate it.

ccrunner_tj said:
Forstall really likes striped shirts. He wore one for the intro of iOS 6 very similar to the one he has in the picture.
Click to expand...

Yeah, I was going to say the same thing. Still rocking the same weird shirt as in the good old days at Apple. 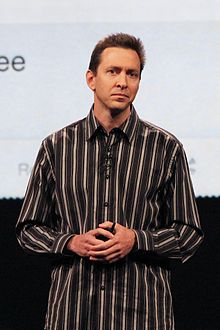