The developers behind the Halide camera app today announced the launch of Halide Mark II, a new photography app that combines everything from Halide with the technology that was introduced in Spectre, an app for capturing long exposure photos, also from the makers of Halide. 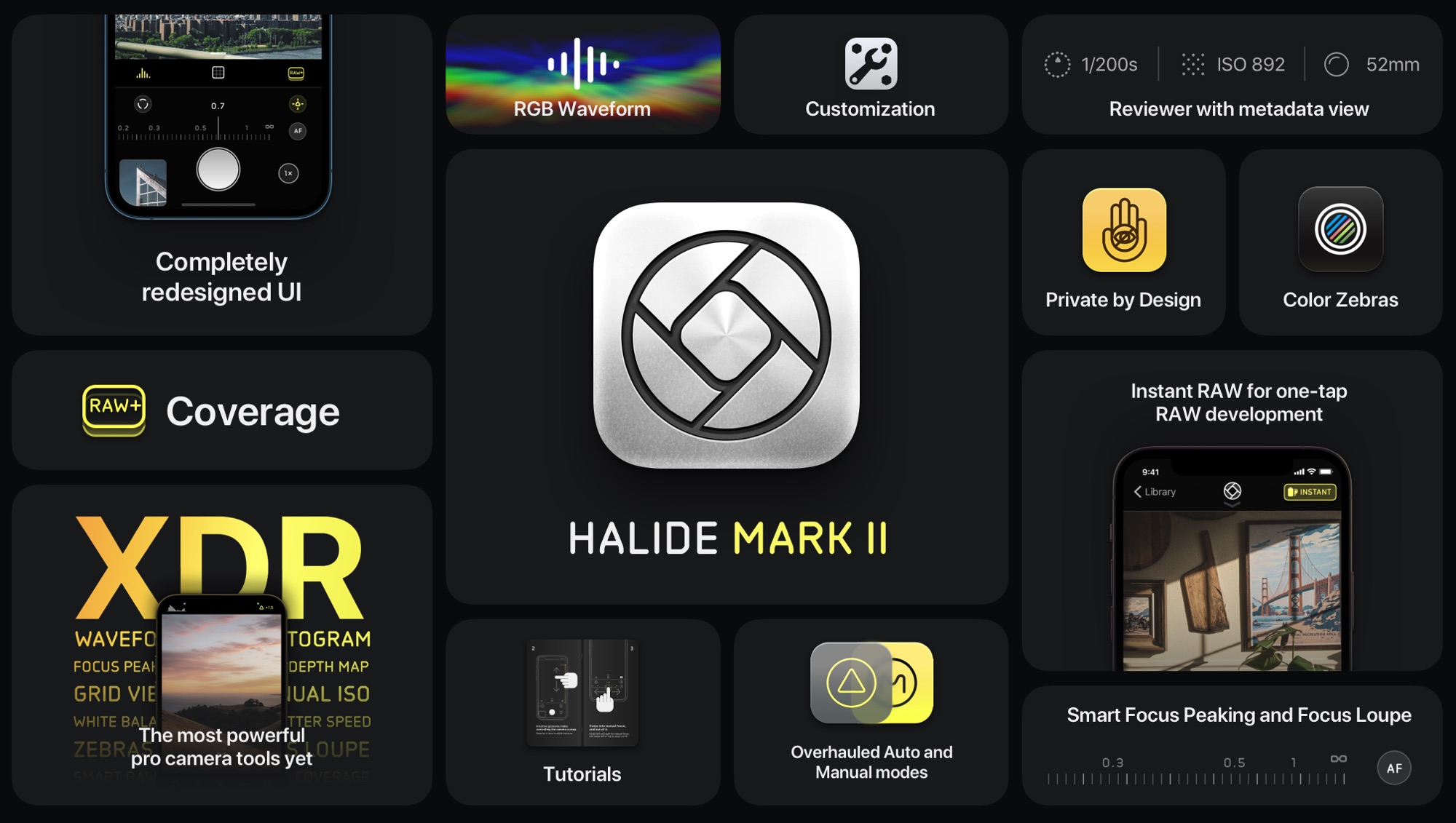 Mark II is described as an "elegant, intuitive camera" that can be used by casual photographers while also providing advanced features needed by expert photographers.

The interface is built on a redesigned version of the Halide interface, and it looks as simple as Apple's own built-in camera app. It offers up easy access controls with just a few taps. A tap on the AF button, for example, disables autofocus and activates manual focus tools.

Halide's developers say the Mark II app was designed with "Intelligent Activation" that causes new tools and options to appear based on need when using one of the Halide camera features.

The design is meant to use every pixel of the iPhone, and as an example, the histogram or waveform are displayed up next to the notch, while the bottom of the iPhone offers up location tagging and the last camera shot. All camera controls are meant to be within easy thumb reach to improve usability. There's a new interface for reviewing photos, which has a more feature rich set of controls. More information is provided at a glance, and photo metadata is accessible. 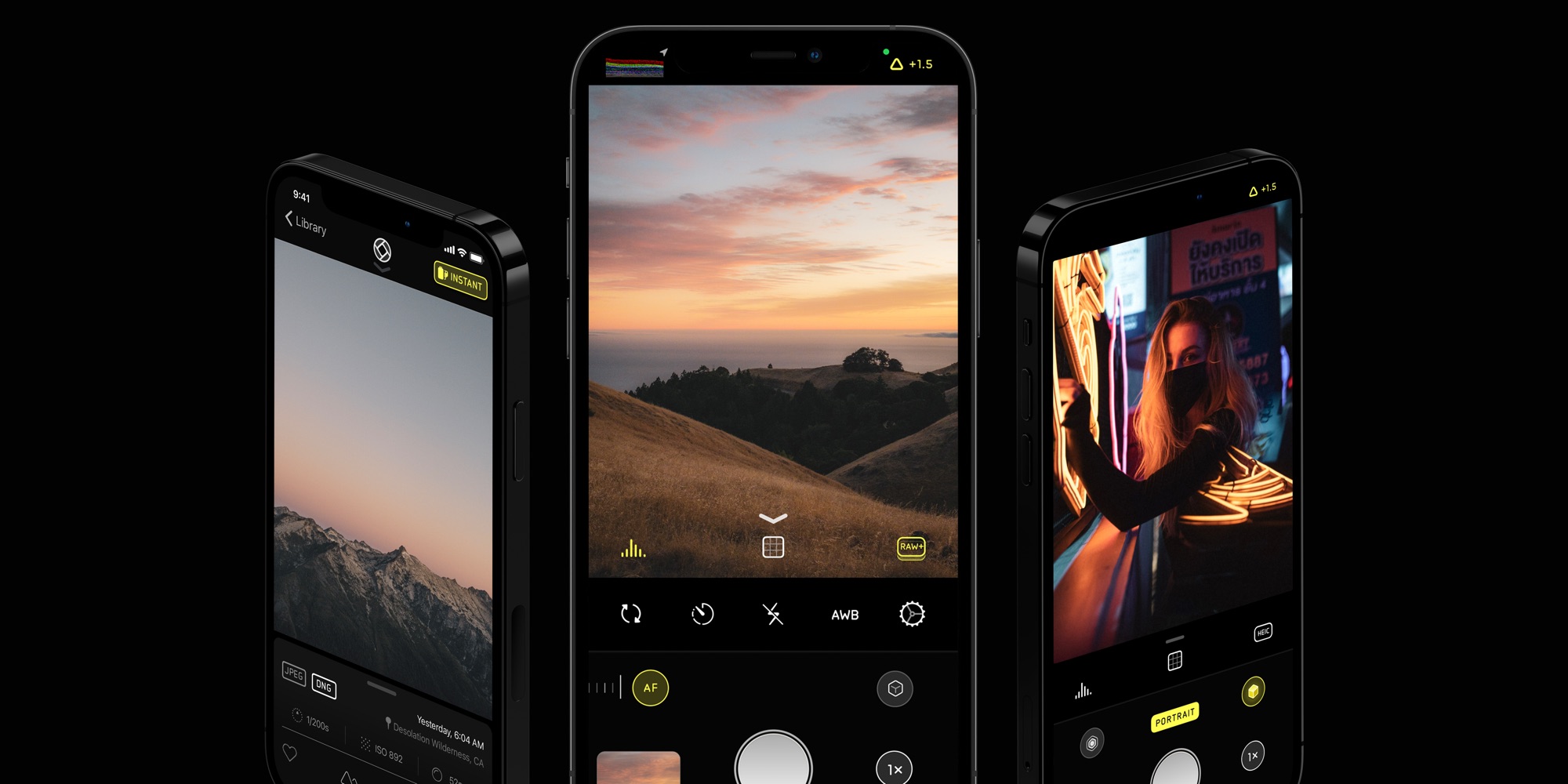 The Mark II app is designed to work with Apple's ProRAW feature, and Halide is adding its own tools to make shooting RAW photos easier on all iPhones. Mark II is able to capture classic RAWs and computational photos using a new "Coverage" feature. With Coverage, Halide users can take photos that use all of the advanced photographic capabilities in the iPhone (Smart HDR 3 and Deep Fusion) while also making a RAW version available for those who want to do their own edits.

There's also an Instant Raw feature that uses machine learning to go through a 17-step process of developing a RAW file to get the best possible auto-edited result that enhances detail and color, ultimately providing something between a JPG and standard RAW file. According to the app's developers, Mark II is the first camera app that's able to visualize the full 14-bit RAW data in realtime, a feature it calls XDR Analysis. XDR Analysis offers a more accurate look at exposure and is enabled when the ISO or shutter speed are adjusted.

Along with these new RAW tools, Mark II offers new focus and exposure tools, including a visualization called Waveform. Waveform horizontally scans over an image and provides info on which channel colors are clipped.

To help users get the most out of Halide Mark II, the app features a 10-day learning course that highlights all of the app's available features and explains photographic concepts. 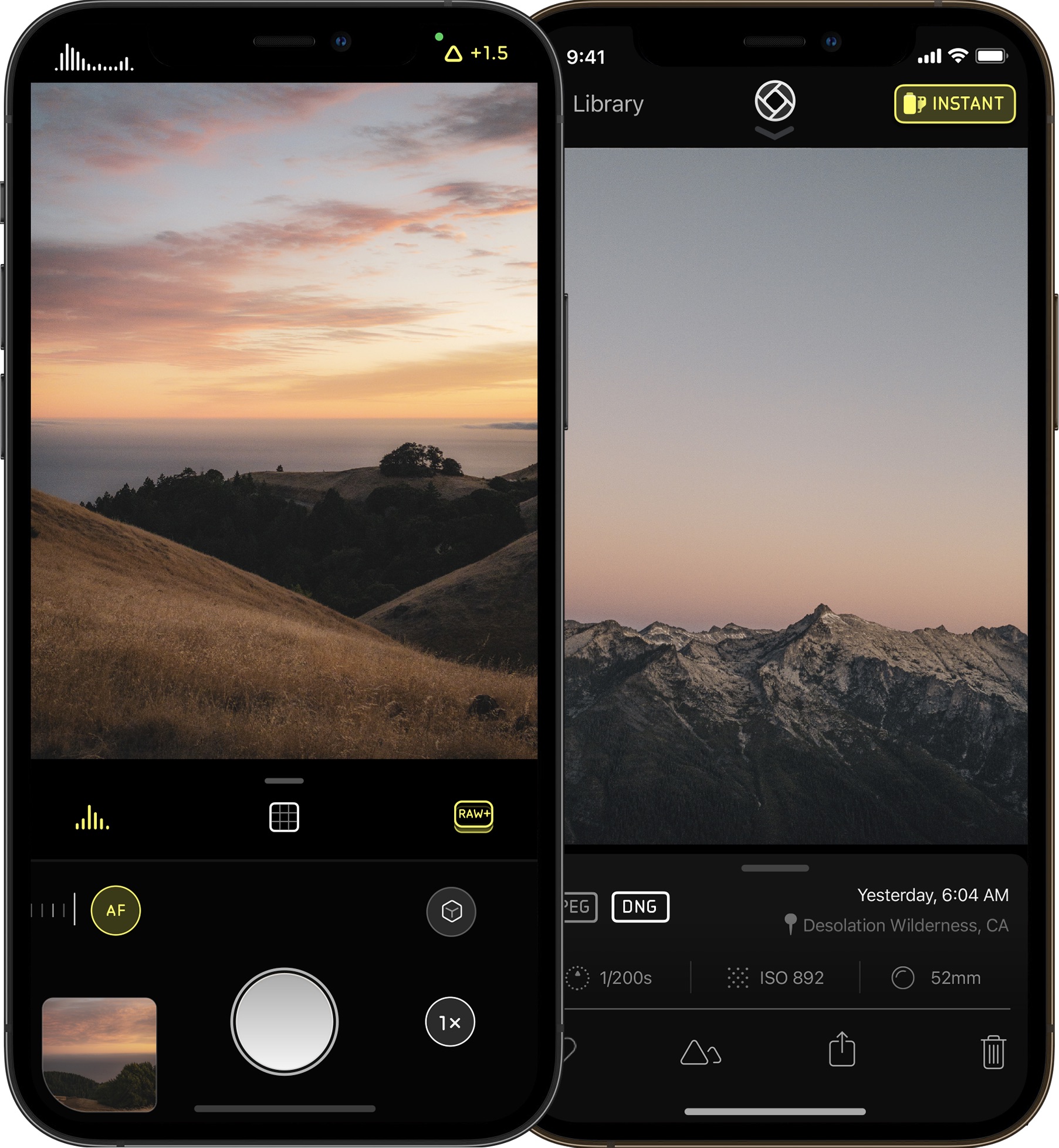 Halide Mark II can be downloaded from the App Store starting today. All existing Halide customers will get Mark II for free, along with a year of members' updates.

For new users, the app is priced at $36, but is on sale at launch for $30, and in the future, prices will be raised as new features are added. There's also an alternative membership option priced at $9.99 per year, which will go up to $11.99 after launch. Prior to making a purchase, there is a free 7-day trial available for users to test out the new features.

Update: While the Mark II update should be free for existing Halide users, there is currently a bug that is preventing those users from accessing the app. A bug fix update is coming as soon as Apple approves it, so existing users should hold off on updating for the time being if they can.

is anyone able to get past this screen without signing up to their free trial??
Reactions: gank41, silentwatcher, PortoMavericks and 5 others

32€!!!!! Hahahahahahaha oh god I can’t stop laughing. Are they joking or what?! Oh my god, that is insane! Whoever pays for that is nuts. Total rip off. They should be ashamed of themselves!
Reactions: e1me5, aberamati, swimatm and 7 others

Wow, 30$ is maybe a bit expensive, but this is the time to show developers we prefer this instead of recurrent subscriptions

People used to talk great things about Halide, although I’m not sure if there is a better alternative that uses the neural engine of Apple’s SoC
Reactions: okieoutwest, HouseofG, tunastink and 10 others
P

$36 for an iOS app? These devs are crazy. I would never charge that much.
Reactions: aberamati, javisan, numberfour and 1 other person

This is great but where can other developers, such as me, announce new software? We have a major upgrade coming on the 20th of November to coincide with the launch of the book The Future Of Text.
Reactions: sparkswillfly808 and MiamiC70

A casual photographer wont buy this and a professional photographer probably got a dslr, I would consider bying it if it was like 10$
Reactions: sparkswillfly808, TOGURO06, mhnd and 6 others
P

so it’s now deleted from my phone

if they do the same thing to Spectre I will be disappointed
Reactions: gank41, numberfour, Kyle4 and 1 other person

Apps like Halide are the reason I’m on an iPhone. $32 is a steal.
Reactions: AJACs3, okieoutwest, zakarhino and 10 others
P

Populus said:
People used to talk great things about Halide, although I’m not sure if there is a better alternative that uses the neural engine of Apple’s SoC
Click to expand...

Better? Not likely, Halide is the gold standard. But Apple's camera app is free and can shoot ProRAW so it's already great for pros.
Reactions: aberamati and javisan
A

Congrats on the devs for creating a sustainable business model. They gave us users the upgrade for free (wow) and new customers can pay once OR pay once a year. I look forward to seeing what they do with the next iPhone as well. They have given us hundreds of features over the years without asking for an extra cent.

Edit just paid a one-time purchase. $30 for 3-5 more years of great software development that keeps up with Apple's innovation in ML & camera tech is worth it. People spending $1000-$1500 on iPhones because 'better cameras' then complaining about a $30 app. sigh.
Last edited: Oct 22, 2020
Reactions: okieoutwest, zakarhino, dotnet and 23 others

Oh btw. If you bought Halide I you get II for free. This should happen automatically. If not: delete and re-install the app.
Reactions: thasan, coolsean20, tunastink and 2 others

numberfour said:
View attachment 971166
is anyone able to get past this screen without signing up to their free trial??
Click to expand...

Nope. I'm a little annoyed as my once working app I paid for no longer works. I uninstalled and reinstalled as they said and it won't allow me to pass this.
Reactions: gank41, SantaFeNM, numberfour and 2 others
A

Ugh, my phone updated to the new app version and now I can't use it without paying $30. This is an app I paid for!
Reactions: aberamati, gank41, SantaFeNM and 3 others

Do NOT update your current version of Halide! They make you pay again which is just absurd.
Reactions: aberamati, gank41, numberfour and 2 others

averagenerd81 said:
Nope. I'm a little annoyed as my once working app I paid for no longer works. I uninstalled and reinstalled as they said and it won't allow me to pass this.
Click to expand...

Paradoxally said:
Better? Not likely, Halide is the gold standard. But Apple's camera app is free and can shoot ProRAW so it's already great for pros.
Click to expand...

Well, the software ProRAW is artificially limited by Apple to work only on iPhone 12 Pro models, so that’s just a viable option for the people purchasing, not only a new iOS device, but one of the most expensive (Pro) models.

Maybe I’m wrong and ProRAW works on all A14 powered devices, but from what I understood, it’s only available for the expensive Pro models.

I’ve never used this app but the fact that they are offering a course on learning makes it attractive.
F

KiraNL said:
Oh btw. If you bought Halide I you get II for free. This should happen automatically. If not: delete and re-install the app.
Click to expand...

That doesn't seem to work. I bought Halide 1, couldn't get the free upgrade. Tried delete and reinstall. Still no luck.
Reactions: dlopan, aberamati, gank41 and 7 others

I'd rather pay $30 than a life-long subscription.Though $30 is a bit steep...
Reactions: CYB3RBYTE, fishmongerer, SigEp265 and 1 other person
F

If you bought Halide 1, try the restore purchase.

However, it doesn't work for me even after deleting and reinstalling. What a cluster**k.
Reactions: gank41, SantaFeNM, numberfour and 1 other person

It’s clearly a bug - they’ve made it very clear existing users get v2 for free.

Wish people would stop sh*tting all over hard working developers and expecting something for nothing.
Reactions: rKunda, chrfr, Luke MacWalker and 12 others
R

I tried Halide and it is a great app, but don't feel like spending that much for this new version.
I find myself using the default camera app a lot, so it is not worth spending money on something I'd use once a month maybe. They do a great job though and deserve praise for it.

Edit: seems like I get it for free, but I can't get past the screen where it asks for a subscription to get additional features
Reactions: SantaFeNM
F

If you bought Halide 1, you should be able to press 'restore purchase' and you'll get the upgrade for free.

However, it doesn't seem to work right now. Halide suggest deleting and reinstalling the app and then restoring purchase agin but it doesn't seem to work.
Reactions: thasan, tunastink, SantaFeNM and 3 others
You must log in or register to reply here.
Share:
Facebook Twitter Reddit Email Share Link
Register on MacRumors! This sidebar will go away, and you'll see fewer ads.
Sign Up
Top Bottom