Samsung this week launched its fourth-generation foldable devices, the $1,000 Galaxy Z Flip and the $1,800 Galaxy Z Fold. Though there's no sign of a comparable Apple foldable device on the horizon, rumors suggest prototypes are in the works, so we thought we'd take a look at Samsung's newest smartphones to see what Apple needs to measure up to when a foldable iPhone does come out.


Subscribe to the MacRumors YouTube channel for more videos.​
Samsung's early foldable devices were riddled with durability issues and hinge-related problems, but Samsung has now had several years to work out the kinks. New hinge designs and body refinements have taken care of a lot of these issues, and the fourth-generation devices look and feel more durable.

The Z Fold 4 is the bigger of Samsung's two foldable smartphones, and it folds like a book, going from a 6.2-inch display to a 7.6-inch display. The Z Flip 4 is a smaller foldable that folds vertically, top over bottom, and it has a 6.7-inch display when opened up. When closed, there's a 1.9-inch display where you can see notifications, the time, and other at-a-glance info. 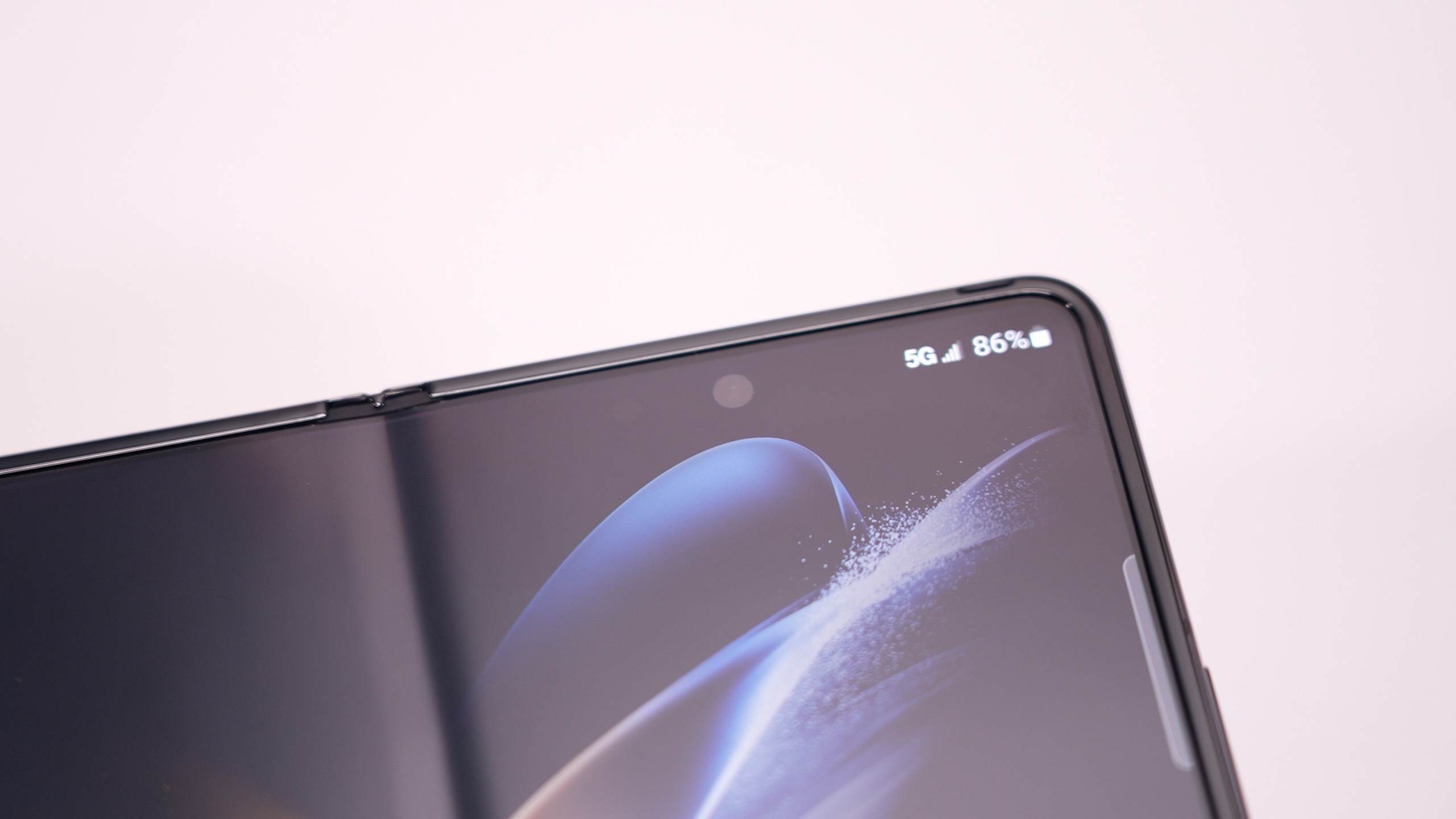 Both of Samsung's foldable devices feature 120Hz OLED displays that look fantastic, and the Z Fold 4 runs a special version of Android built for foldable devices. Android L adds a dock that makes it easy to swap between apps, and there are useful multitasking capabilities. 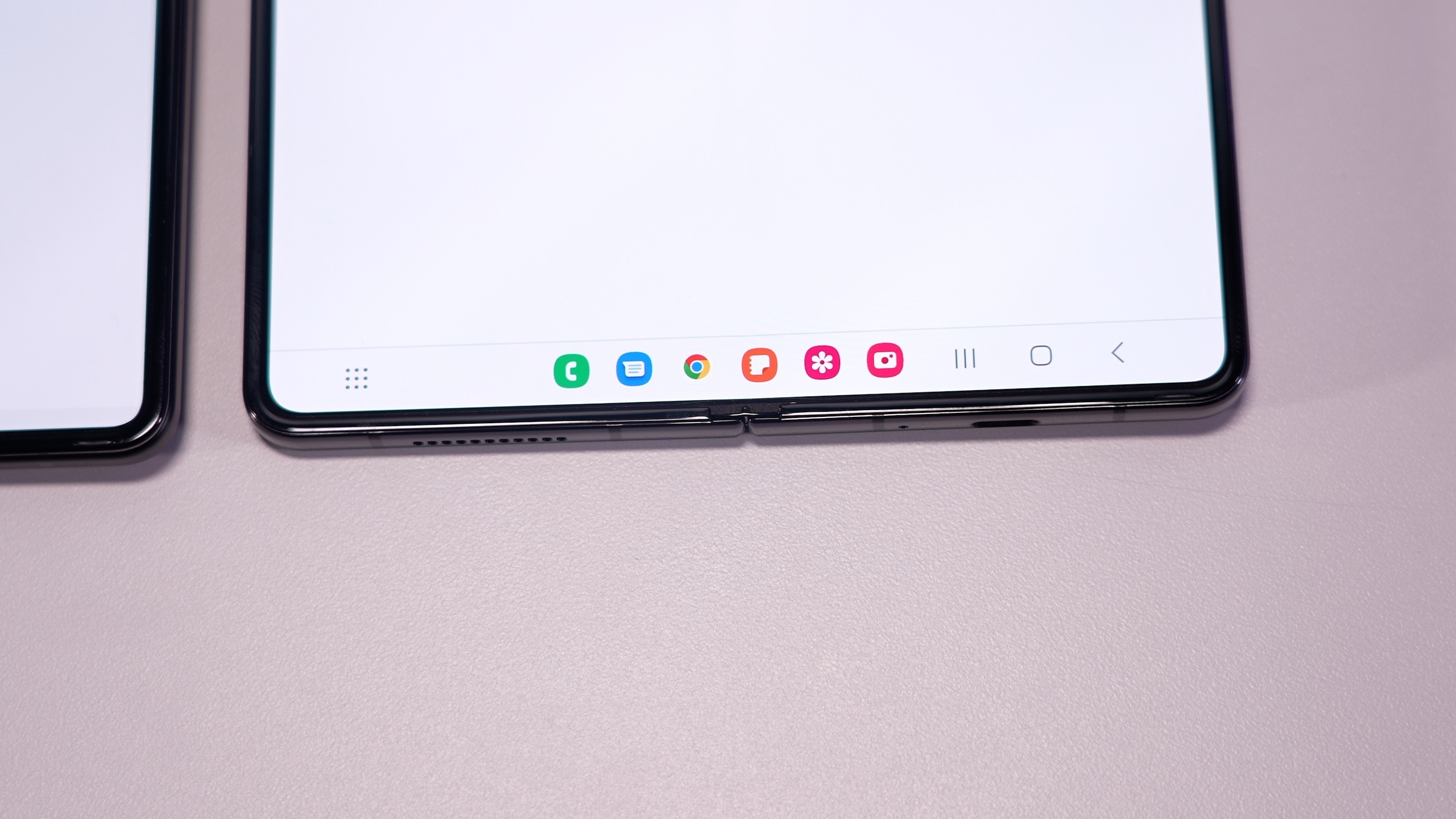 Beyond the novelty of the folding, these two devices have your general high-end smartphone features. Multi-lens cameras, high-capacity batteries that outlast the iPhone battery, the latest Qualcomm chips, under display cameras, fingerprint sensors, 5G connectivity, and more. Make sure to watch our video up above to see the folding mechanism in action and to get a look at the rest of the feature set. 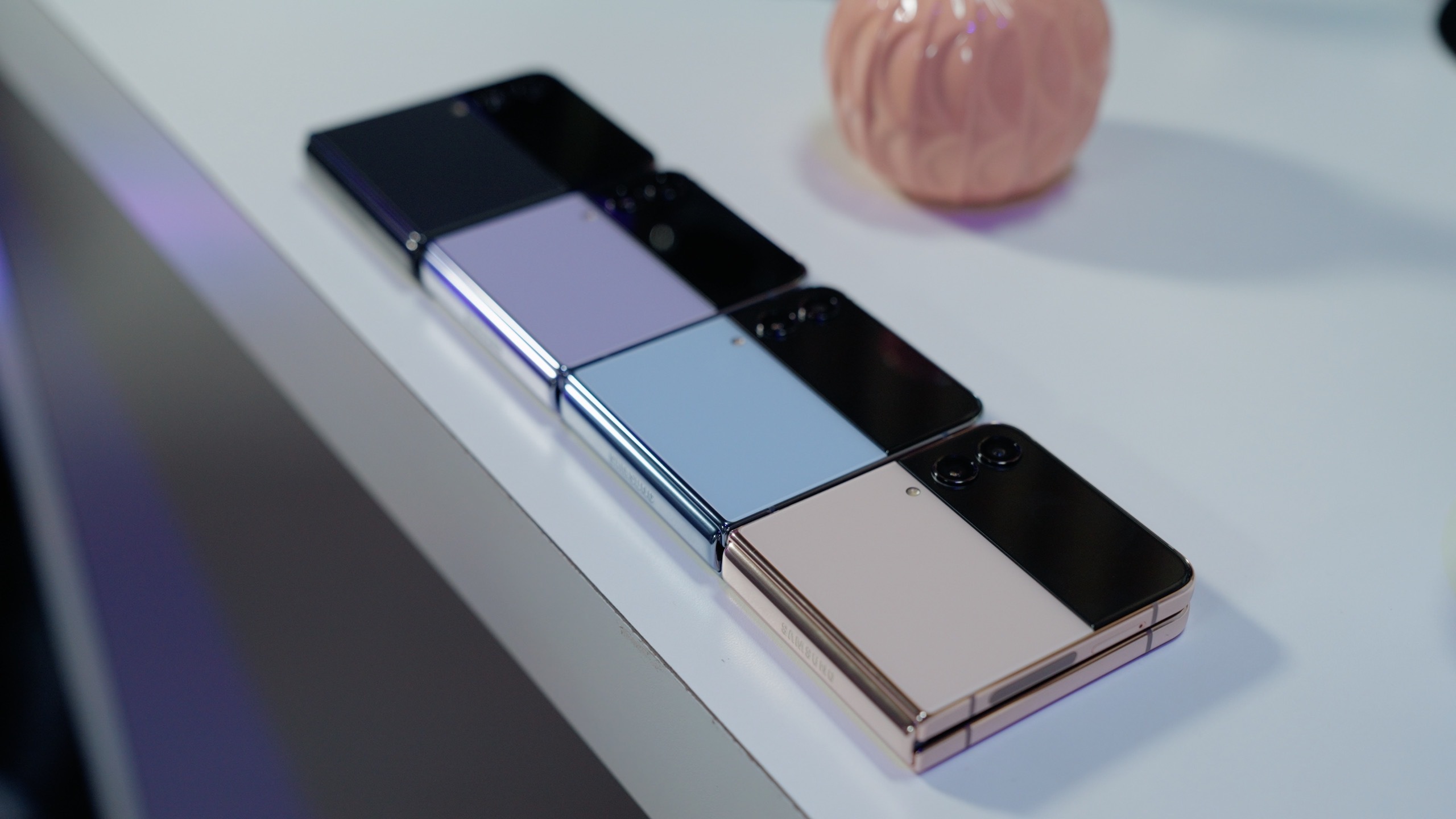 We've been hearing rumors about a foldable iPhone since 2016 when LG Display started producing foldable displays for smartphones, but so far, there have been no tangible rumors about an iPhone that folds as such a device remains in the prototyping stage. 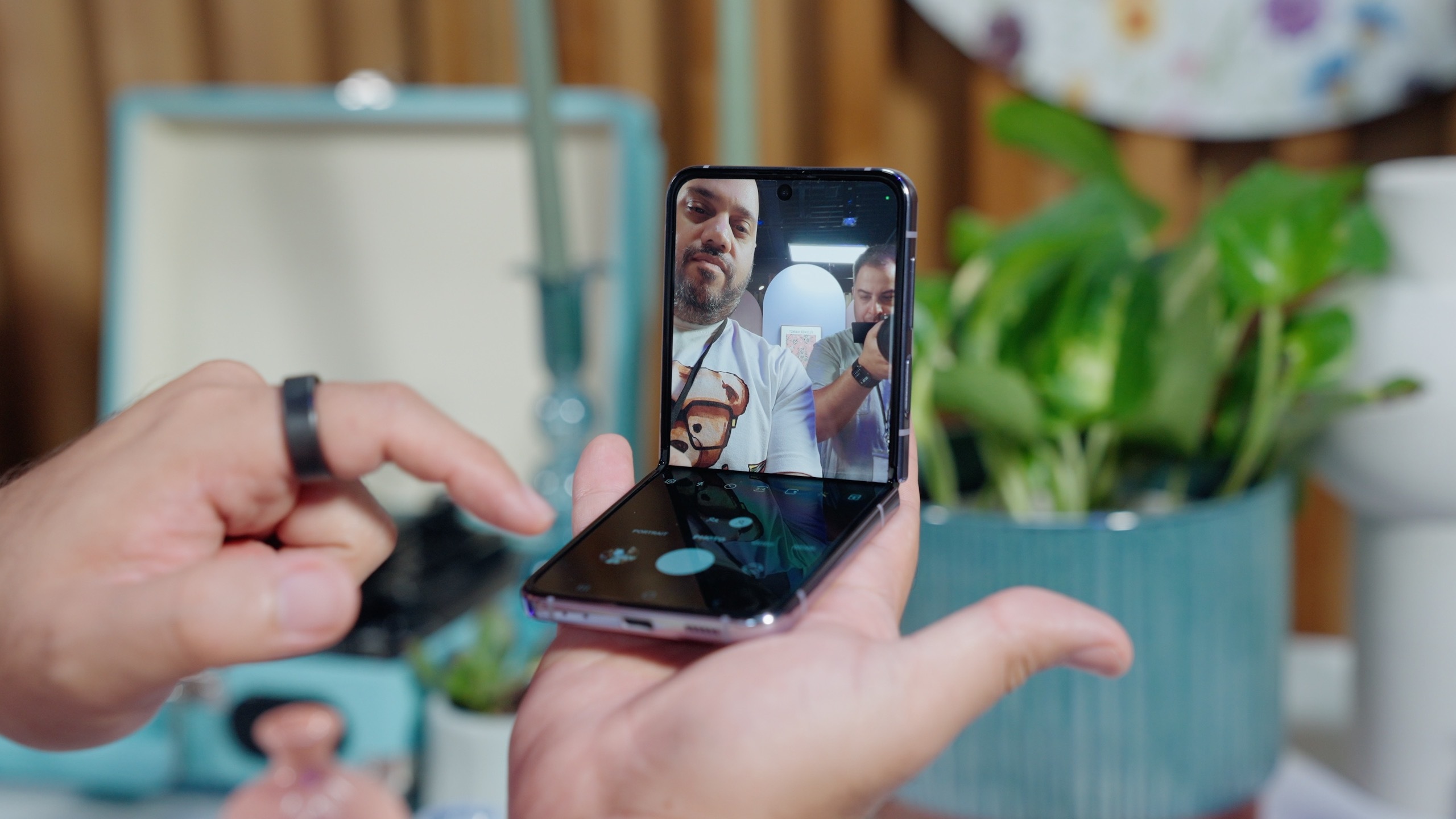 Bloomberg's Mark Gurman said back in January 2021 that Apple's work on an iPhone with a foldable display was in the early stages, and that the company had not yet committed to releasing a foldable device. Other rumors have indicated that Apple is testing 8-inch and 9-inch foldable options, but we're still years off from a release. 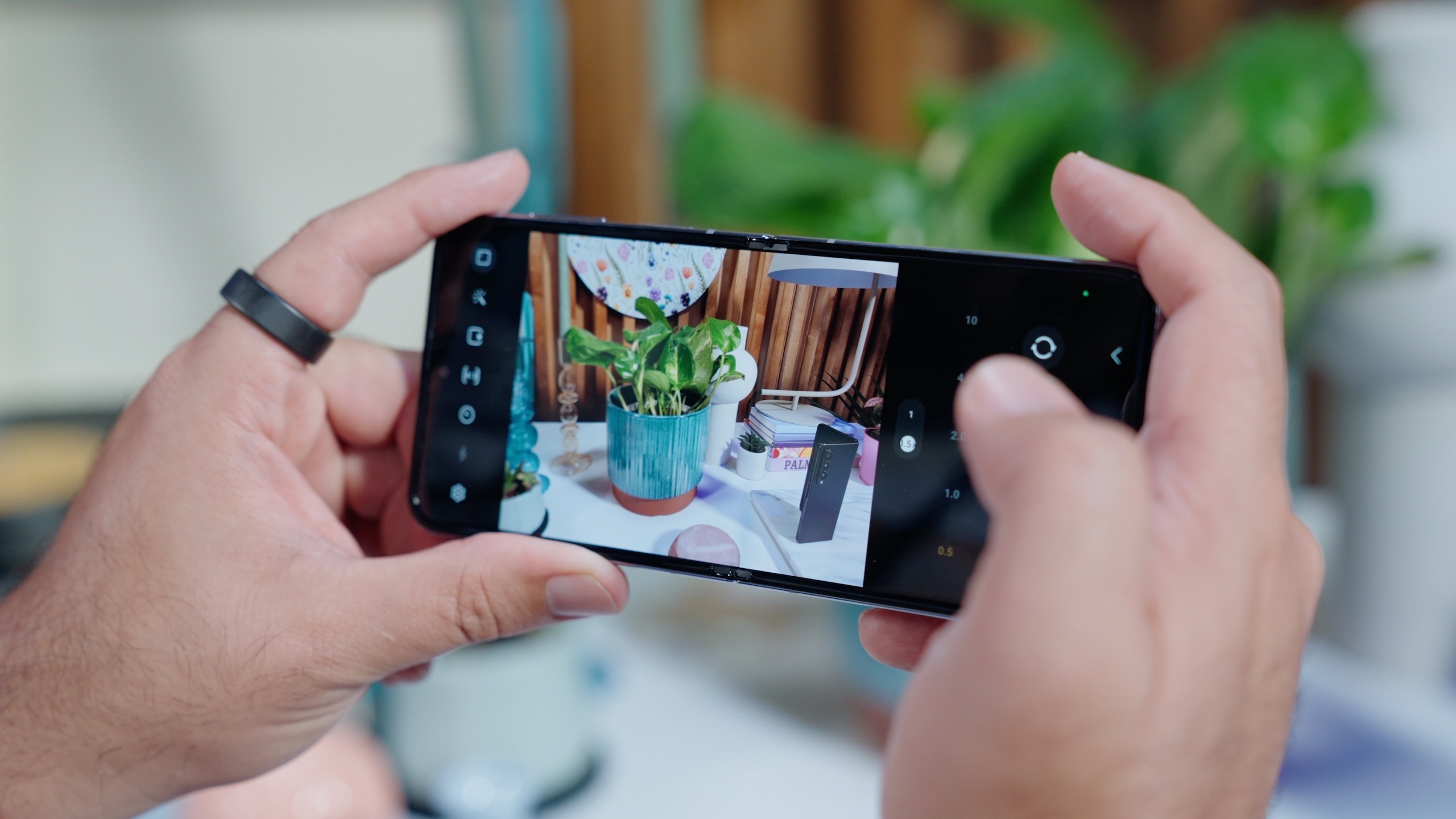 Both display analyst Ross Young and Apple analyst Ming-Chi Kuo believe Apple has some kind of foldable iPhone in development with a launch planned for 2025 at the earliest. Apple often holds off on implementing new technology until the available hardware can meet the quality specifications that the Cupertino company demands, so it is no surprise to see Apple waiting for several years after the launch of foldable Android smartphones to launch its own.

Foldable are brilliant. Having owned a fold the concept is amazing! Can’t wait for the day Apple does the equivalent… that’s what stopped me. Too caught up in the ecosystem. Those who say they’re pointless.. give it a chance first, if you like iPads you will love the form factor!
Reactions: hachre, salutcemoi, ackmondual and 32 others

Does the Z fold have jelly scroll issues in vertical or horizontal??
Reactions: u+ive and sfwalter

These will never be a possibility for me until they can find a way to get rid of that visual crease in the middle of the screen. Even if I'm not a fan of these, at least there are companies like Samsung trying to push the envelope.
Reactions: bossfan61, _karrol, mayga1 and 36 others

Combining the two form-factors into a four-fold (or two-fold?) phone would be nice.
Last edited: Aug 13, 2022
Reactions: Givmeabrek, ajfahey, George Dawes and 1 other person

I mean, it is intriguing. Props to Samsung for tackling this type of technology. I do believe they’ve made huge strides in foldable tech. But I still don’t get it. I’d be staring at that crease all day long.
Last edited: Aug 12, 2022
Reactions: ackmondual, CarpalMac, aParkerMusic and 24 others

klasma said:
Combining the two form-factors into a four-fold (or two-fold?) phone be nice.
Click to expand...

Names for such a product could be

Samsungs doing all the R&D and heavy lifting. In a few years when Apple releases their own folding phone, they'll take all credit and Macrumors will actually give them all the credit.

Happens all the time.
Reactions: bossfan61, ackmondual, miq and 44 others

klasma said:
Combining the two form-factors into a four-fold (or two-fold?) phone be nice.
Click to expand...

Or a roll type screen would be cool and eliminate the crease
Reactions: wbeasley, SFjohn, DailySlow and 3 others

blazerunner said:
Samsungs doing all the R&D and heavy lifting. In a few years when Apple releases their own folding phone, they'll take all credit and Macrumors will actually give them all the credit.

I pray to god that if/when apple makes their own foldable phone, they don't put regular phones on the back burner...
Reactions: aParkerMusic, Apple Core, danbuter and 4 others

mansplains said:
Names for such a product could be 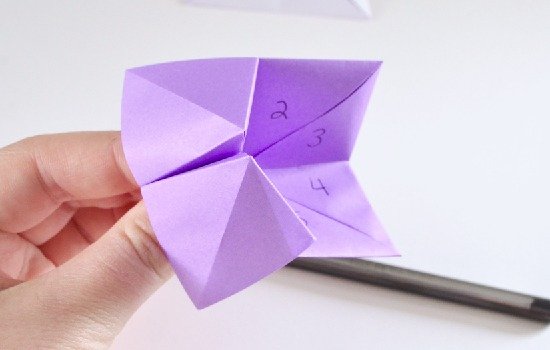 Moonlight said:
Does the Z fold have jelly scroll issues in vertical or horizontal??
Click to expand...

The under the screen camera is great. Your turn Apple!
Reactions: mayga1, miq, _Spinn_ and 8 others

mansplains said:
Names for such a product could be

And yet there is no Jellyfoldgate?

I don't know why but thing phone looks too fragile. Handle with care! ⚡🛑
Reactions: _karrol, mayga1, aParkerMusic and 13 others

Say what you want about the usefulness of foldables, but damn, those are beautiful devices.
Reactions: mayga1, miq, aParkerMusic and 20 others

Moonlight said:
And yet there is no Jellyfoldgate?
Click to expand...

All displays have a certain amount of jelly effect in one of the two orientations. I have no idea which it is on the Fold. Hopefully it shouldn’t be in the main (vertical) scrolling direction.
Reactions: NoGood@Usernames
S

The camera array design on the Fold is so so much better than iPhone.
Reactions: mayga1, miq, Denzo and 5 others

I want a device where I can use as a phone most of the time (a screen like the current iPhone size without folding out) and then I can fold it out to the size of at least an iPad mini -- but not more than the weight of the current iPhone.

I think that's not possible for now.
Reactions: macvicta and DailySlow
T

Shh said:
These will never be a possibility for me until they can find a way to get rid of that visual crease in the middle of the screen. Even if I'm not a fan of these, at least there are companies like Samsung trying to push the envelope.
Click to expand...

I'm with you on the visual crease. I'm less convinced on samsung "pushing the envelope" I mean Samsung is pushing this because they also develop the display technology... so its in their best interest if the foldable form takes hold. They would be the sole screen manufacturer for the first few generations, making them a huge bundle of money.

the technology is interesting... but it honestly just seems gimmicky. its simply a way to fit a bigger screen in your pocket or purse... but its not enabling any kind of revolutionary function. Until I see a meaningful function that a foldable screen enables, I'm not convinced that foldable phones will ever be mainstream.
Reactions: SDJim, aParkerMusic, Apple Core and 13 others