Speculation and rumors regarding tomorrow's iTunes-related announcement are continuing to come in from all directions, and the latest bit of speculation relies on some bits of information pulled out of the iTunes 10.1 release from last Friday to suggest that Apple might be looking to launch some kind of "iTunes Live Stream" service. Details on what exactly the service might be, however, remain sketchy. 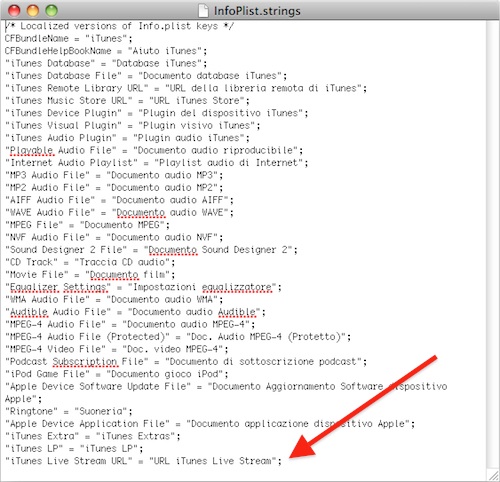 The Apple Lounge reports [Google translation] that translation entries in a property list file included with iTunes 10.1 contain references to an "iTunes Live Stream URL" that appears to be a type of file or service that could be handled by iTunes. This reference is new in iTunes 10.1. 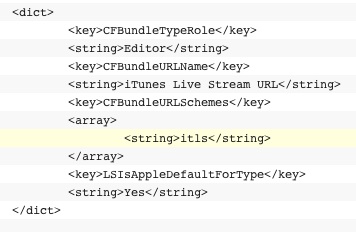 Meanwhile, as noted in a series of Tweets from @dustinrue, other references to "iTunes Live Stream URL" in iTunes 10.1 files suggest the ability to handle "itls" as a URI scheme in much the same way that iTunes uses "itms" to handle requests to connect to the iTunes Store.

As noted, however, it is unclear what iTunes Live Stream actually is, with speculation ranging from live streaming of existing television content to something more along the lines of user-generated streams of live video or audio content.

Apple has been testing some aspects of live video streaming in recent months, rolling out its own HTTP Live Streaming technology based on open standards to deliver live video of its September and October media events. And with the company's new data center in North Carolina set to open by the end of the year, the company would seem to have ample backend capacity for such technology to be deployed on a broader scale.

The speculation remains, however, merely guesses about whether the new hints included in iTunes 10.1 are related to Apple's announcement tomorrow and what exactly those hints might mean.

This is gonna be bigger than The Beatles.

bobbytallant said:
This is gonna be bigger than The Beatles.
Click to expand...

Apple has been acquired by Kabletown GE Sheinhardt NBC Universal. Tracy Jordan will be the new spokesmen for all iOS products, including the latest device: iPlug, a handheld device that does nothing but stream product placement scenes from NBC soap operas.
S

This is the actual source: http://consomac.fr/news-1003.html
D

The fact that Soundhound now has links to I tunes for Beatles songs, and "just another day" is a McCartney song screams BEATLES!!!

I wonder if it could be live streaming events, like the last couple of keynotes have had. they could stream music gigs on iTunes to start with and perhaps cover other live events such as sports events as the service develops.

The plot thickens. It's been a while since the old Rumor mill has rolled into action. Things are looking good for tomorrow.
Last edited: Nov 15, 2010
A

I said it first here.

This is going to be the announcement of tomorrow, watch live concerts from iTunes

The fact that Soundhound now has links to I tunes for Beatles songs, and "just another day" is a McCartney song screams BEATLES!!!
Click to expand...

Shazam has links for many songs that aren't for sale in iTunes. It means nothing. What the hell is the deal with the beatles library coming to iTunes? Like others have said, fans most likely have already CDs and imported them to iTunes. They aren't going to buying them again.
K

It's really quite simple. Look at the Apple home page - four clocks, four members of the Beatles. The whole "streaming iTunes" thing is a red herring.

You heard it here first.

AisEv said:
I said it first here.
Click to expand...

no one cares.
D

It's the ios 4.2 final version is being released tomorrow. That's it!
G

dilgit said:
It's the ios 4.2 final version is being released tomorrow. That's it!
Click to expand...

Yeah, that will really be a thing we'll never forget.

By the way, the front page of the Scandinavian versions of Apple's site has changed to reflect tomorrow's announcement.
C

I think it's going to be live concerts etc

Maybe Apple have done a deal or brought the streaming company

That would excite me elemensly and be an excuse for an apple tv so my good lady could see the Take That concert !!!

dilgit said:
It's the ios 4.2 final version is being released tomorrow. That's it!
Click to expand...

I don't think it will be. It would mention it more specifically as its due out at anytime, and people know this.

The Apple PR team have excelled themselves. The internet is full of people discussing this.

knightlie said:
It's really quite simple. Look at the Apple home page - four clocks, four members of the Beatles. The whole "streaming iTunes" thing is a red herring.

You heard it here first.

They'll kick off the iTunes Live streaming with a live reunion concert with all four original members of Beatles. They've perfected re-animation you see. (This way Apple will never be without Steve.)

Live stream of some content would be useful. Say, Stevenote!
E

AisEv said:
I said it first here.
Click to expand...