How to Prevent rMBP GPU from Throttling in BootCamp?

Hello,
Recently I have noticed that my rMBP has been throttling the GPU while playing games. It starts of at 900 core/2508 memory, holds that speed for a few mins, then jumps down to around 700 core, jumping between 725 and 797 with occasional short spikes back up to 900.

I understand that often times the GPU gets throttled if it is running too hot, but my GPU never exceeds 80 degrees Celsius so there isn't really a reason for it to be throttled. I have tried using nvidia inspector to force it to maintain 900 core but it never seems to work.

Anybody know how to prevent this from happening?
P

Wise people say it's because of weak power supply:
https://forums.macrumors.com/posts/13219963/
A

Shouldn't it get any extra power needed by the battery..?

To fix this, downloading ThrottleStop lets you cap your max CPU speed. It is often surprising how low you need your CPU to be at to run a game. I find that many games only need around ~ 2.0 GHz to fully saturate the GPU. It varies, but its pretty easy to see once your GPU hits a consistent 99% usage.

Google around for some good NvidiaInspector tutorials. Here's a video I made with the batch files in the description.

This tutorial is rather messy, but it contains nearly all the information for NvidiaInspector.

The CPU and GPU are both rated 45W components in the rMPB. This along with the display, and other components can easily surpass the 80W limit imposed by Apple. There used to not be a limit, but the EFI update made it so you couldn't use the battery for more power (fixed the battery drain).
If Apple simply upgraded the power supply to 95 watts, this thread wouldn't need to exist....
G

I have good news my friends!

I got the same problem and tested pretty much what everybody suggested, and it didn't work... the GPU still throttled a lot (rMBP mid-2012, 650m).

BUT, I installed the OSX 10.10 beta, and apparently it changed a few things in the SMC/EFI. It doesn't throttle anymore (just like a normal GPU should throttle).

Some update happened on the SMC or EFI and apparently it solved it for me.

Update: I installed the 10.10 DP2, and I got even more improvements! Now it throttles like a decent GPU should throttle! (Small clock jumps, stable framerates!). Testing on Battlefield 3/4, Grid 2, I got stable framerates even without Throttlestop or underclocking the GPU. I'm really, really happy with this.

Just to put an end in my journey:

Throttling problems went away and came back, and the experience was not really good. I have a 15" rMBP mid-2012, one of the ones that had image retention too. It was serviced by Apple right after purchase for screen replacement, but the thermals were never good. So, now, almost three years after I purchased, I brought it to Apple for service (AppleCare covered me), and they replaced my motherboard. I can say it's completely different now. Stable framerates, can't feel the throttling. I recommend you doing the same if you are unhappy with the throttling.

Maybe reapplying the thermal paste/changing the fans would solve it, but having a thermal problem for a long time can damage the circuits, so replacing the motherboard you will be 100% sure it will be good.
B

I have same problem. Realized years ago. I gave it for repair and they said that's not a problem, this behavior was intentional. I don't play games much but you can feel this problem when you play games. After years, several days ago I called Apple and told them they lied before. I wanted my problem to be fixed but they said checking the problem will cost me!

This is not a lack of power issue because if you cool down your gpu aggressively you can get stable 900mhz without throttling. This is a way to achieve advertised clock frequency: 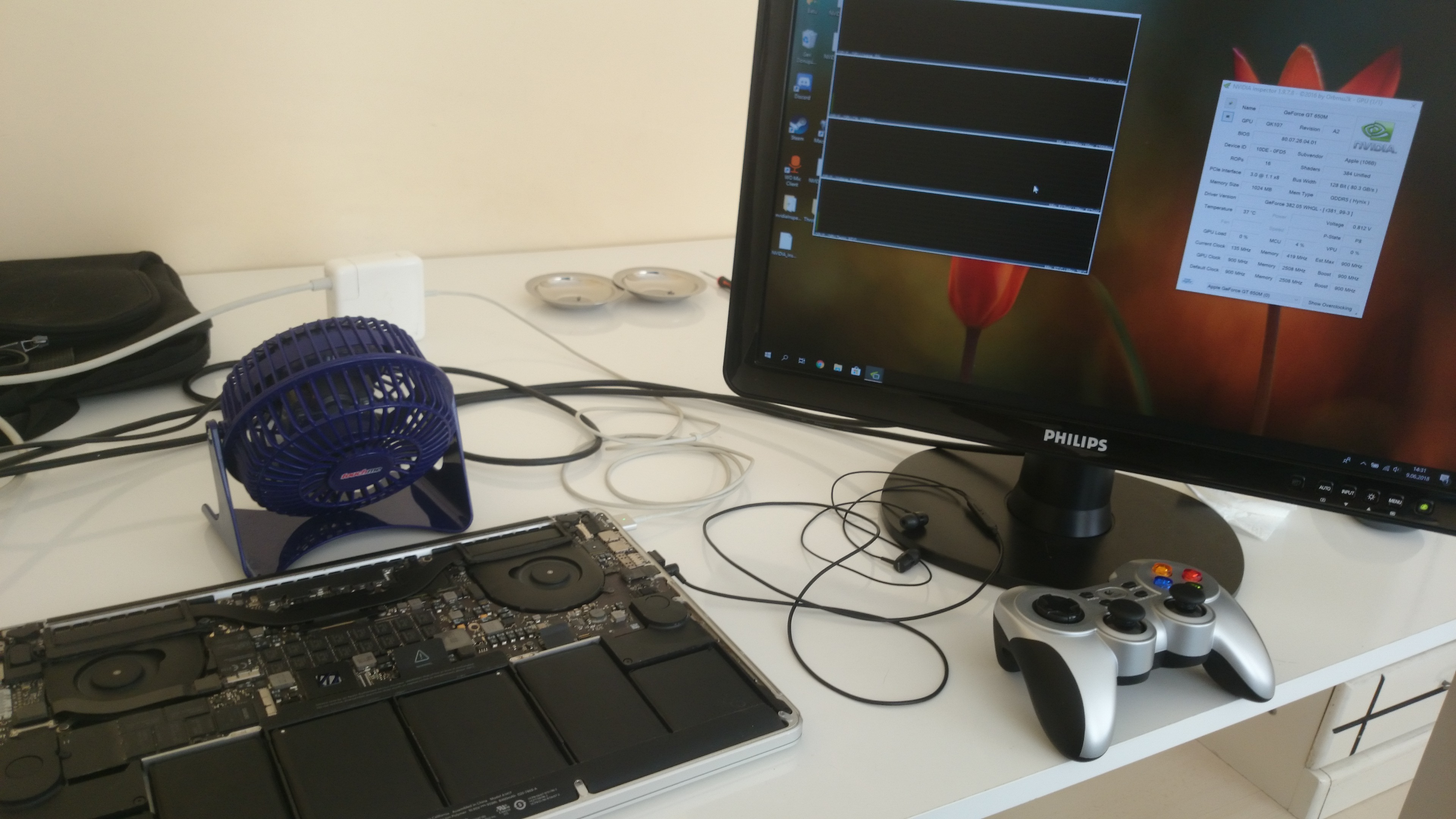 (In case of the image link break: This picture shows my macbook: lid closed, bottom up, bottom cover removed, an external 14w fan blowing to GPU directly, connected to an external monitor via hdmi.)

Before this, I was always telling my friends that Apple's engineering is very good, they are thinking about details for customer etc etc. I was just fool.

I DON'T WANT TO BUY AN APPLE PRODUCT ANYMORE.

And it's not just bootcamp issue, it's throttling on Mac OSX side too. BUT THERE ARE NO TOOLS FOR MONITORING GPU CLOCK. And I think it is intentional. I'm not talking about apps that shows you statics in fancy UIs. There is no developer tool for monitoring GPU frequency. And you cannot use Nvidia-smi tools to communicate with Nvidia chip. I tried "graphic tools for xcode 7.2" too.

Apr 15, 2020
TCMercury
T
Register on MacRumors! This sidebar will go away, and you'll see fewer ads.
Sign Up
Top Bottom