Last week, we noted that Microsoft is preparing to relaunch its vision of tablets at January's Consumer Electronics Show (CES) 2011 in Las Vegas. Despite a tablet-focused keynote by Microsoft CEO Steve Ballmer at CES 2010, Apple's iPad has stolen the show and dominated the tablet market this year as competitors have stumbled trying to bring their products to market.

One of the prototype tablets demoed by Ballmer at CES 2010 was a "slate" from HP, which eventually did come to market in modified form as a business-focused tablet running Windows as originally demoed. But HP has seen fit to reboot its tablet strategy in the wake of its acquisition of Palm earlier this year, reportedly shifting gears to base its forthcoming consumer-focused tablets on a tweaked version of Palm's webOS. 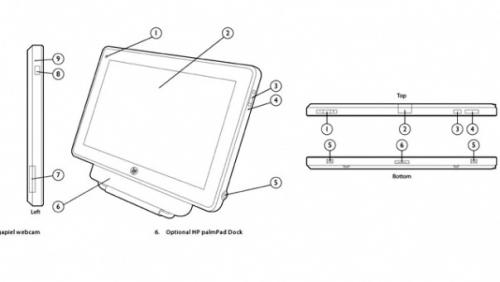 Images from spec sheet for HP's PalmPad
FoxNews.com now reports that HP/Palm is planning to introduce three models of the "PalmPad" at CES 2011. According to the report, the PalmPad will be similar in many respects to the iPad, although it will offer front- and rear-facing cameras and sport mini HDMI and USB 3.0 ports.

HP will introduce three models of the PalmPad at CES, with minor hardware differences distinguishing them. All three will run a new iteration of the WebOS operating system, version 2.5.1; they're collectively a spin-off of the never-released HP Slate. A fourth version won't be shown off at CES, I'm told, but it will be custom made for university students to prove how versatile the machines can be.

The consumer version of the PalmPad will run on Sprint's fast 4G network, but otherwise it has hardware specs nearly identical to Apple's iPad. There are minor differences, of course: It has a mini HDMI port, for example, while the iPad requires a special dongle for video output. And there are front- and rear-facing cameras (1.3 megapixel and 3 megapixel, respectively), both with LED flashes.
Click to expand...

Sources indicate that the PalmPad will be available in March 2011, likely bumping right up against the release of the second-generation iPad if recent rumors are correct in pointing to a yearly refresh cycle for the device.

And in about 15 minutes we'll see a dozen news stories asking "Is this the iPad-killer?"
Comment

HarryKeogh said:
And in about 15 minutes we'll see a dozen news stories asking "Is this the iPad-killer?"
Click to expand...

No, they won't be asking, they will be claiming that it already is killing the iPad.

not quite sure how it will compete against both iOS and Android.

HarryKeogh said:
And in about 15 minutes we'll see a dozen news stories asking "Is this the iPad-killer?"
Click to expand...

And the usual answer which people realize within a few months...

As a webOS user, I have to say that this will be interesting. I think that it might be a good move in order to lure more developers over to webOS. Hopefully, however, the hardware will prove to be better than the Palm Pre and Pixi editions of the OS software.
Comment

Is the tap at the bottom to shove in-between the rolls of stomach and abdomen fat to keep it held for the user?
Comment
C

who give a d*** what HP brings out. It will be short lived anyway.
Once all them cheap as hell tablets running honeycomb saturate(to be sold in CVS, Rite Aid, Walgreens for almost nothing) the market, HP's own honeycomb tablet will bite the dust.
Comment

Competition is good. Unfortunately Palm hasn't managed to be competitive for quite a while now.

Bet it's better than the Win7 tablets though.
Comment

So mix together HP's tablet experience with Palm's smart phone experience, call it version 1.0 of this new hybrid, and think it's going to hit a home run from day one?

Nah, me either. Should be interesting to see all these iPad clones and wannabes clutter up CES in 2011. But the odds of HP getting it right is not good given their recent history.

But hey, betcha Ballmer waves one of them around anyway.
Comment

Cool! Something else that ISN'T THE BEST.
Comment
G

Can someone help me here, why HDMI? Airplay works well and I don't have to have the iPad tethered, and can use it as a remote. Apple TV travels well and works with my iPhone, iPad, and my kids iPods...(yes I actually have all 3). Even my 8 year old loves using the iPad on the big screen.

Its easy to use, involves minimal setup and the whole family can figure it out and I can run optical out to my home theatre.

WebOS is a pretty slick OS, much more polished than any version of Android I've used. Problem is they have fell behind in the 3rd party app market and it will take a pretty awesome product to draw developers back.
Comment

I think we'll see a lot of these catch up to what the iPad currently is. The big question I wonder about is what Apple will do to push the iPad further. They had to know everyone would copy them and catch up. I hope they've used their first mover head start wisely.
Comment

So you can wave a checklist at reporters and say "We got this and iPad does not!"

And no, nobody else will miss it either. While HP tablet users will lug their tablets over the the TV and plug it in, iPad users will just flick their videos wirelessly while sipping a cool beverage.
Comment
B

First mover advantage (or equivalent) goes to Apple. Next year will give us a sea of competing tablets, with a dozens of Androids, RIMs playbook, HPs Palmpad, and a few Windows, and some tiny amount of other Linux variants.

I expect iPad will keep 50%+ of the market and everything will still be compared to iPad, with Android in strong second place driven by the sheer number of models.

The battle for third RIM/HP/MS is a tossup. There should be more Microsoft models, but MS has been at this game for 10 years with pretty much no success and it doesn't look like they have altered the failing formula yet. I give the edge to RIM in the battle for third capturing BB fanatics... I'll give MS fourth and HPalm 5th...
Comment

Perhaps it's no surprise that they named it PalmPad instead of the Palm Tablet or Palm Slate. I guess you have to fit in with what everyone is talking about before you can try to stand out.
Comment

MacMan67 said:
Can someone help me here, why HDMI? Airplay works well and I don't have to have the iPad tethered, and can use it as a remote. Apple TV travels well and works with my iPhone, iPad, and my kids iPods...(yes I actually have all 3). Even my 8 year old loves using the iPad on the big screen.

Its easy to use, involves minimal setup and the whole family can figure it out and I can run optical out to my home theatre.

So why do I want HDMI again?
Click to expand...

Do you carry a AppleTV with you everywhere you go? Every new TV has HDMI and many video projectors also have it. So with HDMI you can hook it to any "new" TV right out of the box - can't say that for the iPad.
Comment

Consumers may not need it but it is a bullet point that will intrigue people who are swayed by bullet points. Just like megapixels on a camera. They ceased to be a useful measure of quality many years ago but people still focus on them.
Comment

WebOS is beautiful work. Sadly there are a lot of undiscriminating buyers out there who are lapping up Android instead.
Comment
A

lyngo said:
As a webOS user, I have to say that this will be interesting. I think that it might be a good move in order to lure more developers over to webOS. Hopefully, however, the hardware will prove to be better than the Palm Pre and Pixi editions of the OS software.
Click to expand...

Of the 4 major Touch OS'es, (WP7, iOS, Android, WebOS) I always felt WebOS was the most suited for a tablet form factor.

Unfortunately, it has no momentum, and is following 2 established (iOS and Android) competitors, as well as WP7, which while not established, is being pushed by one of the most successful SW platform companies.
Comment
C

Woe Be To Ye Unrighteous

Nothing like a catchy subject line to grab the attention...Anyway, the PalmPad may amount to something, but not in 2011. And any company that has to rely on the CES for market penetration has already lost out.

So what's REALLY going to happen in January? First off, Stevie J, who can command his own stage and simply blow off the CES, will announce a second gen iPad on either January 18 or 25, with delivery to consumers on Friday, April 1. And then he's going to make a play for the entire ereader market by cutting the base iPad price to $379-399 and taking Amazon's Kindle DX head-on. The DX is SO dated, and the entire ereader market is easy pickin's. Stevie just won't be able to resist.

But remember, there's MORE!! Splashy is in. Steve LOVES splashy, especially when he's doing the talking, so bet on some January razzle-dazzle that goes beyond the routine market murmurings to date. Exactly what? Remember, Apple is so secretive that the NSA looks like the NYT in comparison, but maybe something like an iOS 5.0 announcement. Or real-time 3-D geo positioning with the voice of your choice...

Plan on another ball in 2011, boys and girls. Stevie didn't merely create the tablet market, he wants it ALL and is going to keep doing slam-dunks just as long as he can. 2010 was just a taste.
Comment
You must log in or register to reply here.
Share:
Facebook Twitter Reddit Email Share Link
Register on MacRumors! This sidebar will go away, and you'll see fewer ads.
Sign Up
Top Bottom