HP's startling disclosure yesterday that it is looking into a sale or spinoff of its PC business and is discontinuing its webOS-based hardware program has sent shock waves through the industry. One of the more curious aspects of the move is HP's plans for webOS, the company's mobile operating system that it obtained with last year's $1.2 billion purchase of Palm and relaunched on new Pre smartphones and the TouchPad tablet just months ago.

According to This is my next..., HP informed its webOS team during an all-hands meeting yesterday that it remains committed to the platform, although it is unclear exactly how the company will look to capitalize on it, whether through potential licensing or other means.

In the meeting, webOS GBU VP Stephen DeWitt made it clear that HP intends to continue to work on webOS and likely intends to license it. DeWitt was adamant, saying several times "We are not walking away from webOS." He detailed a plan to try to determine what the platform's future will look like within the next two weeks, although he admitted that "Clearly, we don't have all the answers today."
Click to expand...

HP executive Todd Bradley noted that with webOS currently designed to work only on Qualcomm-based hardware, potential licensees would most likely be interested in seeing webOS modified to run on other chipsets if HP were to pursue that route.

But many have questioned whether HP will even be able to license webOS to third parties, given that neither Palm nor HP has been able to gain consumer traction with the platform. For its part, HP claims that it sees promise in the software that has been hampered by poor hardware. 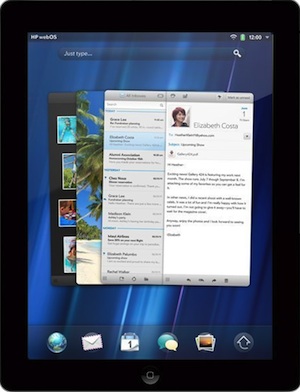 On that note, The Next Web reports that HP engineers had gone as far as to test webOS running on an iPad, finding that the operating system ran "over twice as fast" on the iPad 2 as it did on the TouchPad for which it had been designed. Even running as a web app within the iPad 2's Safari browser yielded substantially better performance than on the TouchPad.

The hardware reportedly stopped the team from innovating beyond certain points because it was slow and imposed constraints, which was highlighted when webOS was loaded on to Apple's iPad device and found to run the platform significantly faster than the device for which it was originally developed.

With a focus on web technologies, webOS could be deployed in the iPad's Mobile Safari browser as a web-app; this produced similar results, with it running many times faster in the browser than it did on the TouchPad.
Click to expand...

The report notes that the TouchPad hardware had essentially already been designed when HP acquired Palm last year, with the engineers tasked with getting webOS running on the existing design. The resulting handicap of outdated hardware reportedly crippled the webOS team's ability to innovate for the tablet platform and ultimately led to the poor market reception.

Regardless of the reasons, the TouchPad clearly did not take off as HP had hoped, and the company quickly pulled the plug on the project as part of its dramatic shift in business focus. The shift leaves the future of webOS unsettled, and while speculation has centered around whether a company like Amazon might be interested in acquiring it for its own use, others have suggested that HP might be better off simply selling off the patent portfolio associated with web OS, a move that could actually result in a profit relative to the company's $1.2 billion acquisition price for Palm.

HP is committed to abandoning customers who fell for its hype.

Or maybe HP produced so much inventory that they'll be able to replace them for years.

Haven't we seen this before after Palm's "iPhone killer" almost lead it to bankruptcy?

MacRumors said:
With a focus on web technologies, webOS could be deployed in the iPad's Mobile Safari browser as a web-app; this produced similar results, with it running many times faster in the browser than it did on the TouchPad.
Click to expand...

I wanna see webOS HTC devices. License that baby! The platform is good, the hardware let it down!
H

It's that awesome.
T

webOS had a cool few things going for it, but ultimately those things did not entice customers enough to buy the products.

They gave the touchpad 6 weeks. Most people give longer for a gallstone to pass.
Y

Their own hardware can't run WebOS at "top speed" and iPad 2 can run it 2x faster then HP's hardware?
G

If they had waited and improved the hardware so that it did run twice as fast, the maybe it wouldn't have flopped. I tried out a touchpad at best buy and boy was it sluggish and laggy!
A

Does that actually mean they jailbroke the iPad to get their WebOS on it?
Shame on you, HP

LOL! u would think they'd test their hardware and the OS before releasing it but what do i know

why does that mail client look like iMail btw, i guess apple doesnt mind as it doesnt have a "S" in its brand name
W

wow, i guess blame the hardware?

So I'm guessing it wasn't the hardware that made the TouchPad "1+"...
A

... that there is a lesson here; rushing to build a product to compete with someone else's already very good product, and producing an inferior product is bad. Most 1st year business students would understand that you don't take on the 800 pound gorilla with a dwarf in a monkey suit. I just don't understand why so many business think that they have to compete on every front, regardless of whether their product is actually good. In technology circles, that's suicide. Tech is moving too quickly to put out inferior products. People won't buy them because they'll find out quickly that they are not worth it.

What I wanna know is how the hell do I hack my iPad to run webOS?

Yeah, as if it was fast it would have suddenly taken off. Give me a break. They needed magic.

Their own hardware can't run WebOS at "top speed" and iPad 2 can run it 2x faster then HP's hardware?
Click to expand...

That is strange. I mean HP is good but the TouchPad failed because the design and the hardware of it was bad. I mean who makes a tablet thats glossy which makes it fingerprint?
B

I don't see any option other than selling off the patents as being a promising endeavor.

0dev said:
What I wanna know is how the hell do I hack my iPad to run webOS?
Click to expand...

I think HP will do something with Apple but I think they were just testing the WebOS on the iPad2. I don't think WebOS will be released to iPad.
L

0dev said:
I wanna see webOS HTC devices. License that baby! The platform is good, the hardware let it down!
Click to expand...

Yep, and join the ranks the Amiga OS crowd that still blathers about how superior Amiga OS is to OS X even to this day. Let it go. "He's dead, Jim." - Dr. Leonard McCoy.

Consultant said:
HP is committed to abandoning customers who fell for its hype.
Click to expand...

Somehow I don't feel sorry for anyone who plunked down $ for a market untested TouchPad. Clearly they bought it out of spite against Apple and Google rather than via an intelligently made decision. The risk WebOS would flop was quite high and clear. You walk on the edge, sometimes you fall off.

If these purchasers wanted something "safer" they'd have bought an Android tab or iPad.

parapup said:
Yeah, as if it was fast it would have suddenly taken off. Give me a break. They needed magic.
Click to expand...

If this is true, the junk hardware didn't do it any favors. It is symptomatic of HP's culture. Maybe it is a good move that they're abandoning consumer hardware  they obviously don't care about it.

And this is very disappointing, HP looked like they might be one more company that got it. In the end they were only aping Apple as a last ditch attempt to save their consumer hardware business. Very disappointing.
C

HP could go to hell, as they haven't done anything interesting in ages.

WebOS on the other hand is/was really interesting. It's sad that it was run to the ground by incompetent companies, and sad to loose what could've been an honest competitor to iOS.

PJMAN2952 said:
I think HP will do something with Apple but I think they were just testing the WebOS on the iPad2. I don't think WebOS will be released to iPad.
Click to expand...

I know it won't be released officially, but if I can jailbreak my iPad and hack webOS on it, that'd be awesome. I'd need dual boot though.