Apple yesterday released a new version of iCloud for Windows 10, and based on multiple reports and the update's release notes, it appears Apple is introducing an iCloud Passwords extension designed for Chrome, which will allow iCloud Keychain passwords to be used on Windows machines. 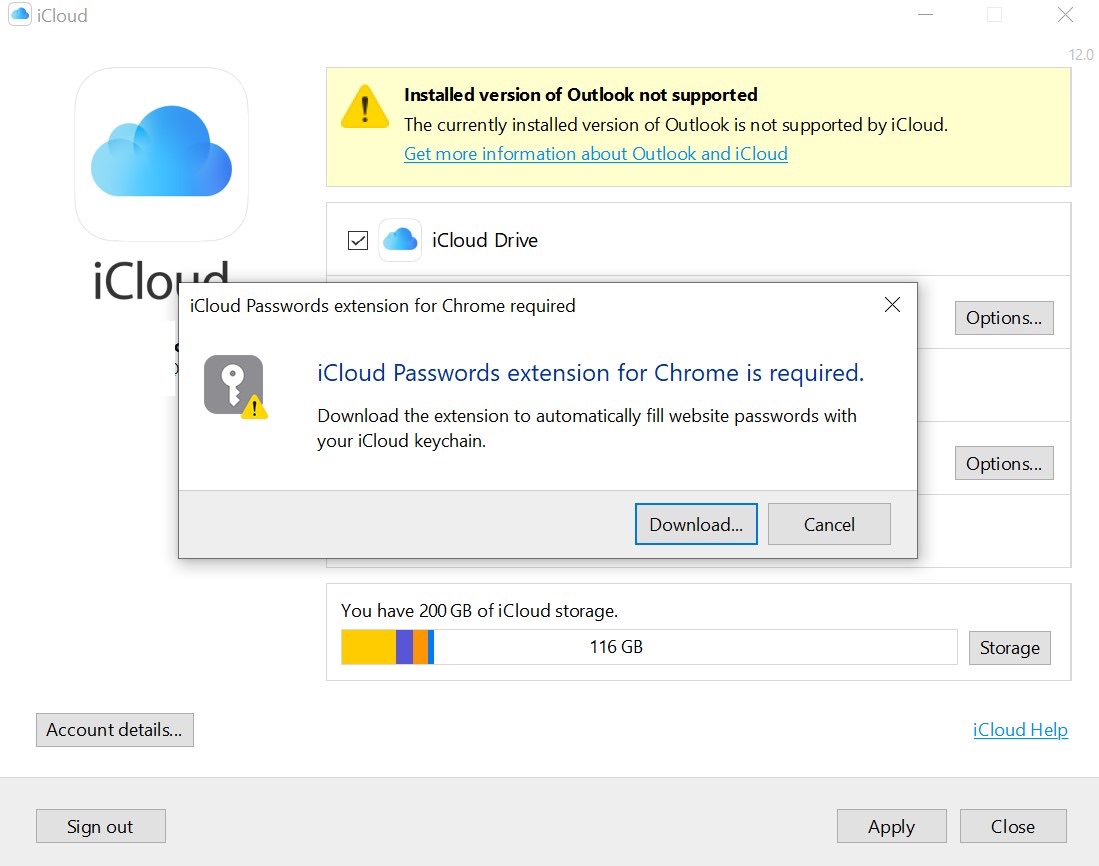 Image via The 8-Bit​
As noted by The 8-Bit and a few other sources, the update adds support for an "iCloud Passwords Chrome extension." After installing version 12 of iCloud for Windows, there's a new "Passwords" section in the app with an iCloud Keychain logo.

When attempting to use the feature, though, the iCloud app prompts users to download a Chrome extension, but the extension is broken and clicking to install leads to a broken web page.

This is likely a bug that will be addressed in the near future, and it sounds like when it is functional, Windows users will be able to access their iCloud Keychain passwords on their Windows machines through the Chrome browser. It's not clear if Apple will offer this extension for Mac machines in the future as well, and it appears to be limited to Windows at this time.

This is huge if they do this. Wonder if will work on edge browser also
Reactions: asterizk, blob.DK, EmotionalSnow and 16 others

i don't use windows, but that's pretty cool for windows / iphone users.

to me it's not quite the same level of competition as password manager products like bitwarden or lastpass, but it's a good introduction for folks who don't usually think about password security.
Reactions: EmotionalSnow, B60boy and Mike_Trivisonno

Why does this need to come for Chrome for the Mac? Everyone uses Safari anyway right?? 😅
Reactions: EmotionalSnow, Rob_2811, IG88 and 2 others

I wouldn't be opposed to the extension on the Mac side as well.
Reactions: asterizk, chemenski, aloshka and 3 others

This is intriguing news. I hope it sees it sees full implementation.
Reactions: jettredmont, chemenski, aloshka and 3 others

Can I get that extension for MacOS ASAP please?
Reactions: Localcelebrity and Mike_Trivisonno

Wait. Stop the rocking horse. Does this mean I can use safari on my iDevices and Macs and Chrome on my Win10 machines without having to manage two password databases?
Reactions: Santiago, mcru21, WannaGoMac and 13 others

Peepo said:
This is huge if they do this. Wonder if will work on edge browser also
Click to expand...

Most likely it will also work with new Edge.
Reactions: TheOldChevy and Mike_Trivisonno

4jasontv said:
Wait. Stop the rocking horse. Does this mean I can use safari on my iDevices and Macs and Chrome on my Win10 machines without having to manage two password databases?
Click to expand...

Yep, Chrome and probably with other chrome-based browsers like Edge.
Reactions: TheOldChevy and Mike_Trivisonno

ervingv said:
Most likely it will also work with new Edge.
Click to expand...

I came here to ask... hopefully it will.
Reactions: Mike_Trivisonno

I think Apple is giving Windows users way to sync theirs pasword to iCloud so they can easily migrate to M1 later. Get the taste of integration they can get there.
Reactions: chemenski, amartinez1660, vmistery and 2 others

I use Linux for my work desktop, it would be nice if I could get a Linux version of this.
Reactions: darkcompass, !!!, Runs For Fun and 1 other person

if you have linux or you want to use in all browser on windows or Mac, there's some passwords that can do it...
I've been using 1password for at least a year now... and it works fine everywhere (iPad, iPhone, Mac, windows pc).
I rarely have to type a password manually.
Reactions: asterizk, vmistery and Mike_Trivisonno

Rudy69 said:
Can I get that extension for MacOS ASAP please?
Click to expand...

Ohples said:
I use Linux for my work desktop, it would be nice if I could get a Linux version of this.
Click to expand...

As long as it is in the chrome web store it should be cross platform so lets hope that is how apple distributes it
Reactions: Mike_Trivisonno and mashdots
D

Now if only Firefox for MacOS could use iCloud Keychain
Reactions: AwesomeSheep, !!!, Runs For Fun and 3 others
D

And just as I migrate back to Firefox!
Reactions: !!! and Mike_Trivisonno
1

We need this for Firefox on Windows too.
Reactions: AwesomeSheep and !!!

Spock said:
Why does this need to come for Chrome for the Mac? Everyone uses Safari anyway right?? 😅
Click to expand...

Most people prefer the white noise their fans produce when using Chrome.
Reactions: jettredmont, jamojamo, IG88 and 1 other person

I use Chrome on iOS half of the time just because of password management between desktop and mobile.

(clarification: I use Windows + Linux at work + grad school, and have switched to primarily iPad and iPhone for home use)

I'd hope they will support Edge as well.
Reactions: dazlicous

I like this. Fam members use iPhones in a basic way - but most use PC laptops - I will be tracking them and urging them to get to know and use this - since most hate unique and complex passwords and that just drives me nuts and they think I am some kind of nut LOL
Reactions: jamojamo

The only reason I use LastPass is because I have a Windows laptop for work and I have to maintain both Keychain and LP to make sure I have the same passwords in both locations. This would be a game changer and I could finally get rid of Lastpass completely.
Reactions: caoimhe and B60boy

I use Windows for work but this would be great since just add other browsers like Edge or Firefox.
Reactions: Frantisekj and AwesomeSheep