I've been thinking about upgrading the hard drive my 1999 iMac g3 DV (Slot-Loader), and I have some questions. I know this model uses 3.5" drives, but what type of connector? Also,what's the maximum speed that can be put in there without heat issues, as it has no fan? Thanks!

It uses a PATA drive. It has a maximum drive size of 128GB. There are no speed restrictions.

Thanks, I had heard that some fast drives can cause heat issues, so I was just wondering.
[doublepost=1494026129][/doublepost]Would this work?
https://www.amazon.com/Western-Digi..._n_feature_keywords_six_browse-bin:6158679011

Yes, that drive will work in it.

Mine has a 7200RPM drive fitted - never been a problem.
C

Just a word of caution, when buying overpriced more than 10 year old hard drives on Amazon marketplace: there have been found several old (even "only" 5 year old SATA drives) on Amazon marketplace Germany, where sellers sold used HDDs as sealed new, where the SMART data was cleared, but it was found that the drives had been running several hours or already had defective sectors. I doubt that this selling method of drives that otherwise would have to be labled as sed or RMA is only done on german Amazon.

Even, if this IDE drive was really new, with this small capacity, I would question, if it is to be recommended, knowing that the drive ages, even if not used. (e.g. the liquid in the motor might be dry). For 20,- USD you can get a bigger, newer probably quieter, SATA drive.

A SATA SSD plus adapter at 120GB capacity might for higher prices, certainly, if you include the adapter, but you could look for smaller SSDs.

EDIT:
If you look at the reviews on your Amazon-link, there is a two star rating, that appears, if you click "show all" and the "show three more". If you directly click on the two stars in the upper section you get told the rrviews don't exist anymore.
This two star rating mentions, that the labled "new" drive was manufactured in 2002 and it died on him 1 year after he purchased it in 2013.
So either you will be getting a "new" drive, sealed, but from more than 10 years ago (getting worn out because of age) OR you will get a used one (worn out from use). Both at high Amazon prices.
This is, where I consider, if it wouldn't be the same, if you just buy a used (or if you find new) one from Ebay at low Ebay prices. On Ebay you have the advantage, that you can look at the picture what the manufacturing date says and sometimes the seller will provide a S.M.A.R.T-analysis protocol, where you can see how long it has been used (power on hours, poh) and if there are errors (reallocated or defective sectors) or signs of wear.

EDIT-1:
Also, f you want to stay with IDE/PATA, you will get newer results on Ebay, if you search for bigger capacities. You will see they go for the same or less than the 40GB you linked to. 80-160GB will still be arround the 128GB limit, so that you don't loose that much capacity unused, and introduced into the market from 2008 on and probably produced till 2011 or a bit longer. (capacities up to 500GB will probably come up with even newer years).
If you want to get a feeling for the prices, there is the possibility to search for ended auctions.
Last edited: May 6, 2017

I hate to reply to my own thread, but would a compact flash/sd card to IDE adapter work in this application? example :https://www.amazon.com/uxcell-Compa...coding=UTF8&psc=1&refRID=0F1R47NABV4Q0WM8C2DY

Probably, although that's a laptop format 44-pin connector, so would need a further adaptor to a 40-pin 3.5" drive type.

CF cards aren't great for write operations so you'd likely get random slow downs in OS X when it's hammering the CF card. Something like an early PowerBook might benefit from a CF card. I'd just go with a regular 7200rpm HDD in an iMac.

AL1630 said:
I hate to reply to my own thread, but would a compact flash/sd card to IDE adapter work in this application? example :https://www.amazon.com/uxcell-Compa...coding=UTF8&psc=1&refRID=0F1R47NABV4Q0WM8C2DY
Click to expand...

I have a Bondi Blue Rev B iMac G3 (with Sonnet 500 MHz logicboard upgrade -via craiglist)
which I installed this IDE to CF adapter:
https://www.amazon.com/gp/product/B000TMDE6G

Once the 3.5" HDD was removed, I remember a lot of room in the area.
So I just had the ribbon, power cable, adapter/CF card floating, though carefully inspecting that nothing would short-out from accidental electrical contact (maybe I did put a non-static-wrapper floating in there too, can't remember exactly).

MagicBoy's correct about CF cards & constant OSX writing
(virtual memory action as I understand it, could be other things).
However, I use my sub-800 GHz PPCs mainly for Mac OS 9 & under, usually Virtual Memory off.
None of them are daily drivers - They're more like, well today I feel like playing around with one of them.

I did make a Panther partition in the CF card though,
just because I could & I took into account the CF/OSX caveat.
My Bondi has a fan (noticeable hum),
but I did think of a CF card contributing to a cooler environment compared to a 7200 rpm IDE drive.
My Bondi's CRT flicker-clicks every once in a while so its lifespan is on its way out.

I've never nailed down the real specs for the Bondi's real IDE speed.
I suspect it was really like 16 not 33 (like the HDD specs) &
Apple installed those clunky slow 5400 rpm cheap drives.
So the CF card I chose at the time, speed/price-wise, was this one:
https://www.amazon.com/dp/B001FO4QHI
I thought anything faster would be redundant.
I also have the same adapter/CF card setup in my PowerMac 6500.

Here's a screenshot of the Bondi's System Profiler/Devices and Volumes: 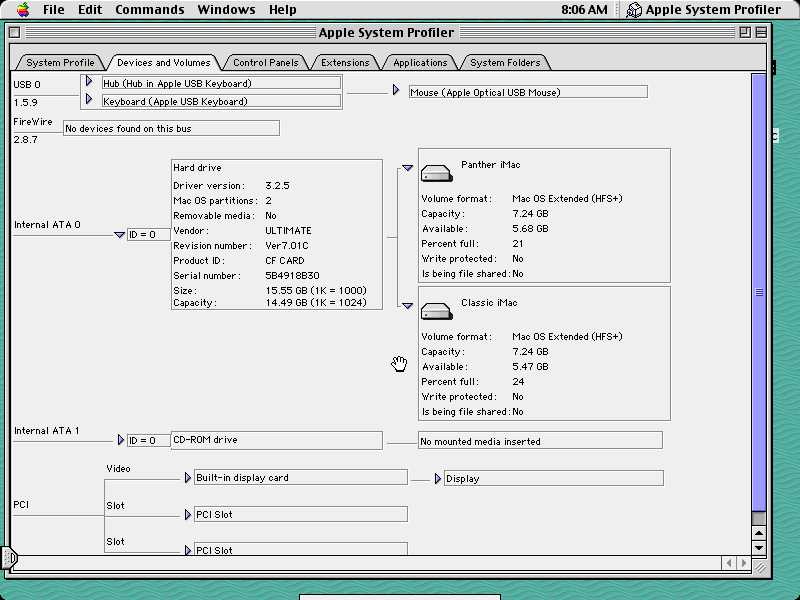 AL1630 said:
I hate to reply to my own thread, but would a compact flash/sd card to IDE adapter work in this application? example :https://www.amazon.com/uxcell-Compa...coding=UTF8&psc=1&refRID=0F1R47NABV4Q0WM8C2DY
Click to expand...

If you have a flash card left over, ok. But if you have to buy the flash card on top of the adapter, then I would think twice, when the CF card will only have a 10th of the capacity of a similar priced HDD.

I looked into ebay.com and there were no 3,5" and 2,5" IDE drives showing up from the US, only from the UK, Germany and China with shipping to the US (a lot with zero shipping costs). I wonder, if the website sees, that I am in Germany or if Americans really don't sell IDE drives... - could someone from the US have a quick look, if there are US offers on EBay for IDE drives?

PS: ok I can find US offers. Strange, Ebay doesn't find the same drive with different search terms, allthough both search terms are included in the offer title. The drive includes the words "160GB 3,5" SATA" (I know, we need IDE) and it didn't find it with "3,5" SATA", but with "160GB SATA".