Sketchy claims that Apple's "iPhone SE 2" could boast an iPhone X-esque display apparently refuse to go away, with the latest addition to the rumor pile coming courtesy of Sonny Dickson.

Earlier today the parts leaker posted an image on Twitter of a supposed iPhone SE 2 screen protector that appears to share a similar notch-design to the one Apple uses to house the iPhone X's facial recognition sensors in lieu of Touch ID fingerprint recognition. 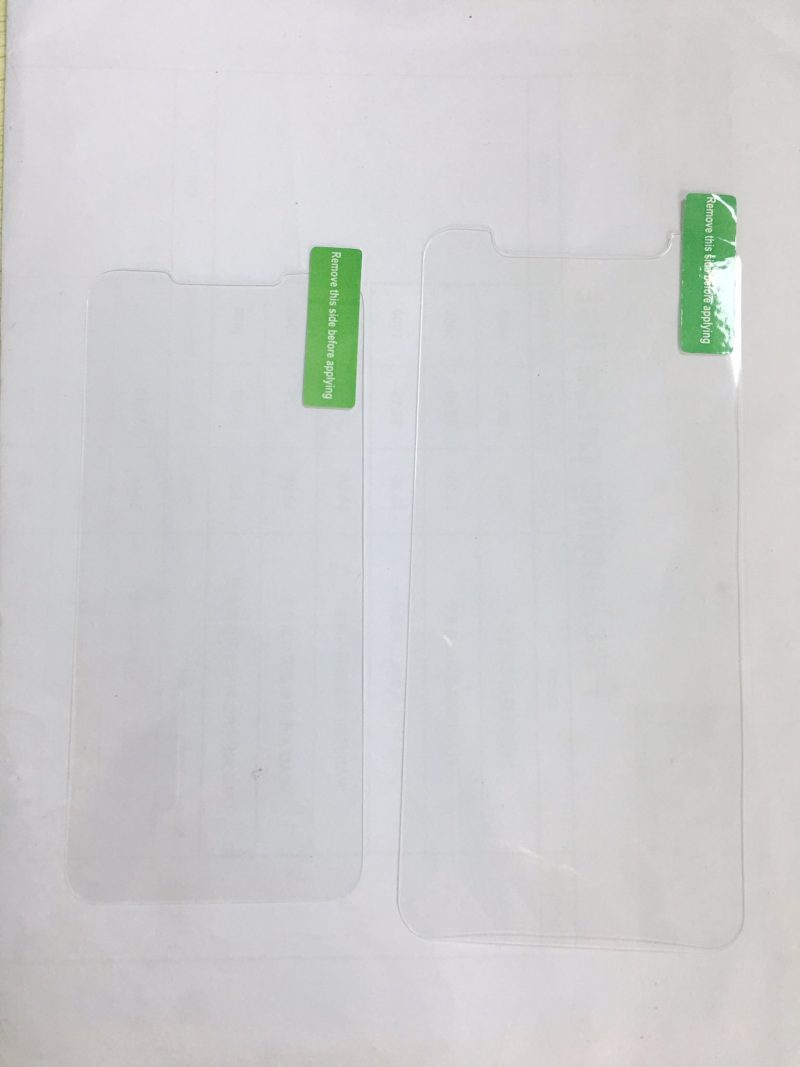 The comparison shot also shows an actual iPhone X screen protector (right) beside the allegedly leaked one in order to highlight the smaller notch that would presumably be destined for the smaller form factor phone.

Unconfirmed renders and dimensions of the next iPhone SE obtained by MacRumors from casemaker Olixar claim the device will have a length of 4.7 inches and a width of 2.1 inches, making it slightly smaller than the current model but with a larger display thanks to the fuller-screen design. They also suggest the device's notch will be around half as wide as the one on the iPhone X, but the idea that it might house facial recognition sensors still seems far-fetched.

Apart from the technological hurdles that Apple would have to overcome to achieve the unlikely feat, it's hard to imagine that Apple would include Face ID on the iPhone SE at all without hiking up the price significantly. Including the feature on an iPhone that starts at just $349 would reduce Apple's gross margins and risk cannibalizing sales of the iPhone X, which starts at $999.

Those issues put the whole notch-design in doubt, given that the lack of a home button would require some other method of user authentication. Some rival smartphones have recently featured integrated screen fingerprint sensors, but Apple has suggested it won't be following that approach ever since it developed its TrueDepth camera recognition system.

Apple hasn't properly refreshed the iPhone SE since it launched back in March 2016, but it did double the available storage capacities in March 2017. Rumors about an updated model have been contradictory in recent months, but they can be distilled into two camps: one hoping for a iPhone X-like design, and another expecting a minor refresh.

If the iPhone SE is updated, I think it would be minor with an improved resolution, camera upgrade in a similar form factor retaining a familiar price point.
Last edited: Jun 1, 2018
Reactions: TimSHB, Dave-Z, Preclaro_tipo and 3 others
Comment
A

This is so fake. No way SE will have a smaller notch. What, they will remove the camera? I think SE won’t have a notch at all just because with the smaller screen, the space on the sides of the notch will be too small to display anything.
Comment

Why do we always have to talk about the SE as a "discount" device?
I would love to pay a high price for some of the same features as the flagship model as long as it comes in the SE form factor.
Reactions: Tozovac, Sea Bass, MartyvH and 24 others
Comment
T

Honestly. I think this is just a cut-out for the speaker. I'd say they moved the speaker closer to the edge... and the screen protector just covers the entire front of the device... doesn't mean that the actual screen will extend this high!
Reactions: Kram Sacul, machumors90, psymps and 6 others
Comment

Face ID will not fit in such a small notch... I don't think this screen protector was made for real iPhone SE. It looks more like someone made screen protector based on recent rumors...
Reactions: otternonsense
Comment

Schranke said:
Why do we always have to talk about the SE as a "discount" device?.
Click to expand...

Did you watch the March 2016 Keynote when the SE launched? Greg Joswiak stated they introduced the SE to be an “Affordable” entry-level iPhone with a 4 inch form factor. In order to make it that way, they didn’t include all the latest technology, which also made it affordable for other countries where the higher iPhone models are exorbitant in price.
Reactions: ZZ9pluralZalpha, The Don Onez, djbuddha and 2 others
Comment

Oh please don't do this Apple. Just put the iPhone 8 specs inside the current SE body. If people want a shrunken X then they can do that to, but it shouldn't be passed off as the SE.
Reactions: subjonas, tonyr6, Breaking Good and 2 others
Comment
S

as real as the new Mac Mini with the latest guts...
Reactions: machumors90 and Aston441
Comment

Schranke said:
Why do we always have to talk about the SE as a "discount" device?
I would love to pay a high price for some of the same features as the flagship model as long as it comes in the SE form factor.
Click to expand...

Might be an engineering limitation. Having a bigger screen = bigger device body = more physical space to fit all the components in. Just guessing.
Comment

Maybe they just do notches on all devices? Tiny SE notch, but no face-ID. Why not?
Hopefully we'll see on Monday.
Comment

Oahhh - uuahh a notch...!
After months of opposition, fatal notch craze has also caught me:
After eye-cell amputation, I now enjoy a blacked out notch-zone of inactive retina cells for a permanent notch view - whether on phones, tv's, iPads, haircuts, my wife's (or Joni's) face and anything else that lacks a notch.
Man, it feels so good.
Last edited: Jun 1, 2018
Reactions: MartyvH, Marekul, Dave-Z and 2 others
Comment

The small notch could work if the bezel is not as small as the iPhone X's. Even if not, rumors were that Apple was already developing smaller notches for the next generation. First generation is always done quickly to beat the market, then come the improvements. They'd have a good year or so do decrease the size of it.

Also, Im uncertain if this would be the SE or just the iPhone XI smaller version (from the rumors of the 3 sizes). Either way Im excited, especially if they were to keep the same form factor as the SE, I much prefer the flat edges over the round ones (and the flush camera is a kicker in my book). The only reason i upgraded from my SE was due to the iPhone X's lack of bezels! This will be an exciting year either way
Comment

I suppose if they took out the face ID kit, they would be able to reduce the notch. If they brought out an SE with an iPhone X style design, I would snap that up.
Reactions: nwcs
Comment
B

Why is so much speculative nonsense passed off as “news” here?
Comment
V

If it is true, it means that the new se won’ t have a design without a bezel.
It will feature a small upper and lower bezel and a notch under the bezel.
So small black borders under the display and above the display. The upper bezel will have a speaker and the front camera, and beneath it will be a notch featuring the faceid.
So a cheaper and smaller lcd version with the new aspect ratio at 4.7 inch, and a small lower and upper bezel with a notch under the upper bezel, faceid, no headphone jack, wireless charging, etc. for about $550.
Perhaps they’ ll have an upgraded “ classic” se with slightly updated specs for about $350 they will launch at the same time as this version.

Notch on an SE? Not unless Apple has lost its collective mind...(again)
Comment
B

I think that this is real and we’ll see a notch SE released along with the other phones - and iPads - with a 2nd gen Face ID component, that is smaller than the current one.

I did think that Apple was going to redesign the SE to fit in iPhone 7/8 components.

Personally, I’d be happy with that but Face ID is clearly the future.

What’s the point of using resources to design a new phone with a home button and then have to support it for the next 4 years?

Perhaps the current SE will be kept on sale, but I think that we’ll start to see the average selling price of an iPhone, creep up again.

In the end, Apple is never going to be able to compete on price regarding android.

So it makes sense to provide lots of screen sizes but to always be at the premium end regarding build quality - and pricing. Kind of like a BMW or Audi compact car.
Reactions: apolloa
Comment

I guess we'll know on Monday if they decide to announce these news phones if there is a successor to the SE.

alex00100 said:
This is so fake. No way SE will have a smaller notch. What, they will remove the camera? I think SE won’t have a notch at all just because with the smaller screen, the space on the sides of the notch will be too small to display anything.
Click to expand...

The SE 2 won't have FaceID. It'll just have a tiny earpiece and a camera.
Comment

These days I’m indifferent to Android v. iOS. Android has come a long way ok usability, while iOS has opened up a lot (to the point where the only reason to jailbreak/sideload, for me, is red-on-black night room mode in flux/goodnight).

But I just can’t reconcile myself to giant phones. I wa hoping Sony would give me a clear upgrade from my current SE but their hardware simply isn’t competitive especially given the price. If only One Plus would make a small phone. I’m hoping this SE 2 turns out well; not having a headphone jack will be a pain in the ass driven by nothing but politics but I’ll deal with it for a modern screen-to-body ratio on a smaller phone.
Comment

While I don't expect this leak to pan out with an SE2, I still think Apple needs three flagship phones. They need a small, mid, and large one. They have the mid already and large is expected soon. Now just make the small one and we're all happy. Nothing preventing them from continuing to make a budget phone.
Comment
You must log in or register to reply here.
Share:
Facebook Twitter Reddit Email Share Link
Register on MacRumors! This sidebar will go away, and you'll see fewer ads.
Sign Up
Top Bottom