iOS 11 Now Installed on 38.5% of Devices Two Weeks After Launch

Two weeks after being released to the public, iOS 11 is installed on 38.5 percent of iOS devices, according to data collected by analytics company Mixpanel. 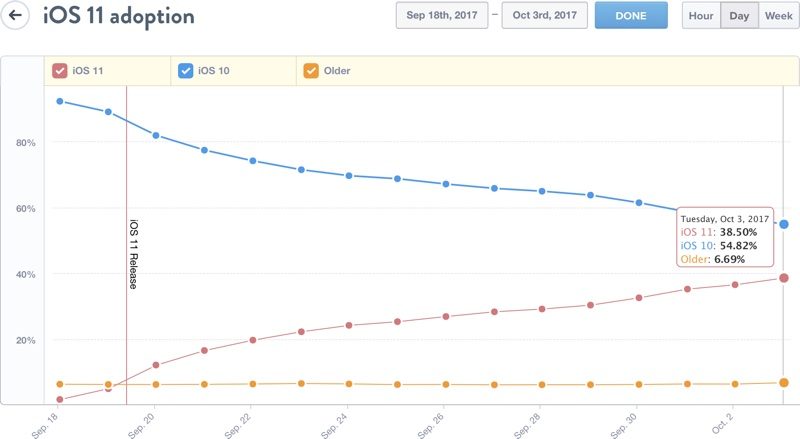 iOS 11 adoption rates have been slower than iOS 10 adoption rates during the same time period last year. Two weeks following the release of iOS 10 in September of 2016, the update installed on 48.16 percent of devices, putting iOS 11 about 10 percent behind.

It's not clear why iOS 11 adoption is lagging so far behind iOS 10 adoption, but it could be due to the fact that key features like peer-to-peer Apple Pay and iCloud storage for iMessages have been delayed until a later update.

Apple has already released two minor updates to iOS 11, iOS 11.0.1 and iOS 11.0.2, both addressing bugs in the operating system. The most recent iOS 11.0.2 update, for example, fixes an issue that caused some iPhone 8 and iPhone 8 Plus models to emit a crackling sound from the earpiece during phone calls.

As iOS 11 adoption grows, the number of users on iOS 10 has been decreasing. 54.82 percent of iOS users continue to run iOS 10, while 6.69 percent run an older version of iOS.

Oh wow, an OS is installed on many devices after Apple spams the hell out of their users to install it. I wonder why that happens..
Reactions: Ladybug, caoimhe, Kobayagi and 23 others

People don't even bother installing an update that slows down their device without adding any new feature or functionality. Possibly the worst iOS release to date.
Reactions: DaRockNL, atikalz, studlybw and 39 others

I would update, but I'm waiting for the return of the 3D Touch multitasking shortcut before I do so. I refuse to update without this feature.

And while I'm waiting for that to return, hopefully most of the major bugs will be ironed out
Reactions: JosephAW and techpr

Wish my google tv remote app would get finished and apple didn't pull it from the app store so I could at lease use my old phone until the app got updated. Any way to get an app from a 6s on 11 to a 4 on 7.1?
K

The slower adoption (compared to 10) could be due to the fact that 32 bit apps won't work with iOS 11.
Reactions: caoimhe, EspressoQueen, Obi Wan Kenobi and 31 others

Just under 40% in a mere two weeks is still not bad though.
Reactions: rcappo, freezelighter, tardegrade and 7 others
D

Not surprising considering that this is the update us iPad users need badly and also being one of the smoothest iOS version at launch!
Reactions: Kopa, bobob, t1meless1nf1n1t and 3 others
P

No need to speculate, I'll tell you why...

I figure I'll reconsider upgrading my 6S once 11.1 comes out.
Reactions: caoimhe, ikky, atikalz and 36 others

I've had a perplexing experience with iOS 11 so far. The public betas ran great on my 7+. Traded that in for an 8+ and it acts kind of jerky/sketchy from time to time. And the GPS seems to be wonky, especially with Pokemon Go, where my location doesn't get updated so I have to kill & relaunch the app. My wife updated her 7 from 10 to 11 and has suffered from extreme slowness and battery drain.

This is not stellar.
Reactions: Sasparilla, RevTEG, bennyf and 1 other person
I

Worst update ever, at least for my iPhone 6: full of bugs. QA this time made a bad work...
Reactions: Colonel Panik, ruimpinho, User 6502 and 2 others

Part of it could be because of the perfectly serviceable devices that cannot be updated to iOS 11, my iPhone 5 and iPad 4 included.

EDIT: It seems some have taken my post to be a complaint about some devices not getting iOS 11 and it creating their forced obsolescence. That was not what I was saying. My meaning was that Apple devices have a long life and continue to be used, even though they cannot have the latest OS.
Last edited: Oct 4, 2017
Reactions: motulist and bennyf

Moonjumper said:
Part of it could be because of the perfectly serviceable devices that cannot be updated to iOS 11, my iPhone 5 and iPad 4 included.
Click to expand...

That's not "perfectly serviceable". Are you kidding me? Your iPhone is 5 years old, the processor is slow as balls. iOS 11 lags on the iPhone 6, it wouldn't be usable on the iPhone 5. And don't even think about blaming Apple or claiming "planned obsolesce", I challenge you to find a phone that will receive updates for as many years as your iPhone 5 did.
Reactions: Colonel Panik, Sasparilla, t1meless1nf1n1t and 6 others

I'm not upgrading because of control center not turning off Wi-Fi and Bluetooth. That decision is completely bad and I'm waiting for them to fix it. I don't have a watch or anything that needs Bluetooth or Wi-Fi but I do want to turn it off to save battery usage and say check google maps in the car well it still has a very poor connection to the house... Because I'm not upgrading that means that my wife's phone will not get upgraded as well.
Reactions: ikky, Sasparilla, ruimpinho and 7 others
A

I assume there's a good chunk of folks waiting for the iPhone X, and there isn't an urgent need to update knowing they'll have their current phone for only a few more weeks*

*realizing now, even with pre-orders, it might be a while before Apple catches up with demand.

Side note: Still sport'n an iPhone 6 ... going on 3+ years ... while the battery life has fallen, and general updating has slowed aspects of the phone, I'm impressed with how well it's been doing with iOS 11!
Reactions: SMacDuff, kironin, tyasjs and 1 other person

PowerBook-G5 said:
I would update, but I'm waiting for the return of the 3D Touch multitasking shortcut before I do so. I refuse to update without this feature.
Click to expand...

Karma*Police said:
The slower adoption (compared to 10) could be due to the fact that 32 bit apps won't work with iOS 11.
Click to expand...

Both are reasons I'm sticking with iOS 10 on my iPhone 6s+. Planning to keep running it until I upgrade my device next year and go to iOS 12.

iOS 11 has degraded the performance of my iPhone and iPad. While I like the new features and am looking to using them on a new phone I will buy later this fall, they have not benefited me on my current 2015-16 devices, they have only slowed them down.
Reactions: ackmondual and Mac32
D

Back that statement up I see no evidence of that
Reactions: freezelighter, tardegrade, Kopa and 9 others

It's not clear why iOS 11 adoption is lagging so far behind iOS 10 adoption. The most recent iOS 11.0.2 update, for example, fixes an issue that caused some iPhone 8 and iPhone 8 Plus models to emit a crackling sound from the earpiece during phone calls.
Click to expand...

I tell you : battery drain and bugs. ios 10 was so much better
Plus Wifi and bluetooth not completely disabled from control center?
Not a smart move!
Watch iOS 4 is even worse : why did I update, why?!!!
I forgot to add iTunes 12.7 to the list of recent disasters by Apple
Reactions: ruimpinho, RevTEG, JPSaltzman and 3 others
J

so, you have articles suggesting a person wait before installing iOS 11 because of the new file system, the fact that Fusion drives are not yet supported in High Sierra, along with a host of other issues and NOW you ask why the install base is slower that last year. Too much has changed for immediate adoption and anything that suggests that you should plays loose with the Apple customer base. Apple can nag all it wants to but until Fusion drives are supported it is a big NO for installing.

I'd be more inclined to update if it wasn't planned obsolescence; I suspect other consumers have grown wise to Apple's ways as well.
Reactions: mac-hummer and Octavius8
I

It's not clear why?? Seriously? Guess you don't have an older device then!! No one is updating cos it's ruining every device below 7. iPhone 6 here updated, slowed everything down, buggy, jumpy apps and transitions, 11 of my favourite old apps got deleted or didn't start. And my battery was down from 90% to 50% in about 2 hours. (Shut up about indexing - it's not that, stop being stupid) after 2 days I downgraded again. Back on 10.3.3 now and my phone is perfect!! PERFECT! Battery lasts ALL day long. Apple sucks now. Period
Reactions: Ladybug, caoimhe, mac-hummer and 11 others
S

Doubt I'll ever update my iPad Air 2, sadly... the features look great, but I have about 40 32-bit and iCade games that I've paid for that would never work again, and I'm not having that.
Last edited: Oct 4, 2017
Reactions: Ladybug, EspressoQueen, pavinder and 2 others
You must log in or register to reply here.
Share:
Facebook Twitter Reddit Email Share Link
Register on MacRumors! This sidebar will go away, and you'll see fewer ads.
Sign Up
Top Bottom