Apple today released the fifth beta of iOS 7, which brings a number of improvements, changes, and bug fixes to the operating system, including newly redesigned Settings icons and a Control Center option that allows the feature to be disabled within apps.

iOS 7 beta 5 also offers a slew of minor interface tweaks and improvements that continue to make iOS 7 feel both faster and more polished. Our forum members have noted multiple enhancements that have been bundled into the release:

Settings - The icons in the Settings menu have seen a complete design, going from standard blue icons to a variety of square icons in various colors. 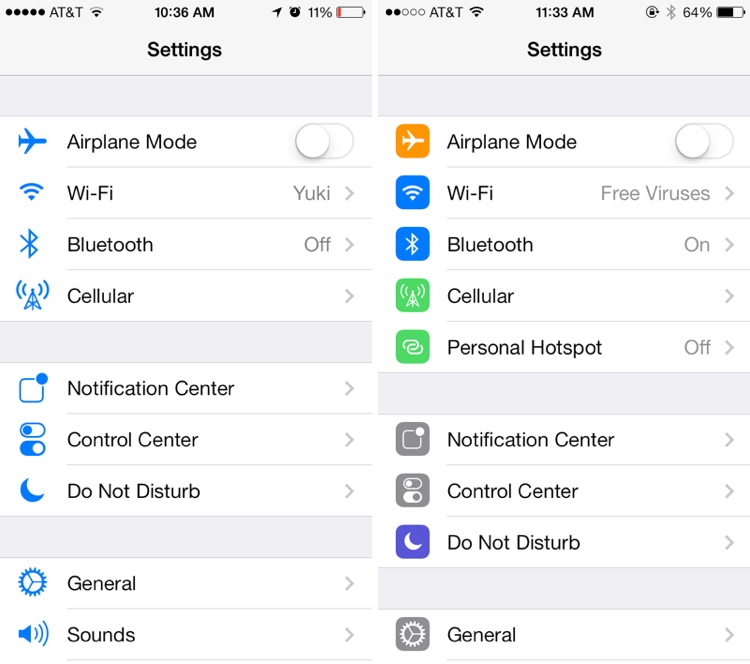 Control Center - Control Center's settings now allow the function to be turned off while in apps, preventing Control Center from being accessed from the bottom of the screen while playing games or otherwise using apps. 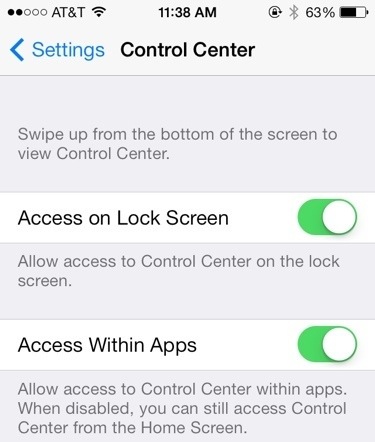 Power Off - The slider bar that displays when the iPhone is being powered off has been slightly altered. 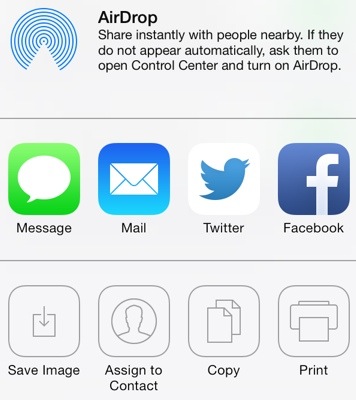 Notifications - Banner notifications can now be pulled down to access additional information.

Phone - The icons that are displayed while a user is in a call have been slightly altered with the addition of circles around the icons. They also appear to be larger.

Boot Screen - When installing iOS 7 beta 5, many iPhone 5 users noted that the color of the boot screen matched their devices, with a white screen used for white phones and a black screen used for black phones. This differentiation appears to be limited to the iPhone 5 at this point in time as iPad owners and older iPhone users have not noticed the change.

Messages - In iOS 7 beta 4, Apple changed Messages to default to displaying the first name and last initial of a contact in a conversation. With beta 5, only the first name is displayed by default, though other options can be selected in the Mail settings menu (which is linked to Messages). To access the feature, go to Settings / Mail Contacts and Calendars / Short Name (under Contacts).

Additional features in iOS 7 beta 5 will be added here as they are discovered. Apple is likely to continue pushing regular updates for iOS 7, bringing minor performance boosts and changes ahead of the operating system's public release, which is expected to come in the fall.

and my moving background no longer works in beta 5 :-(

SteveLV702 said:
and my moving background no longer works in beta 5 :-(
Click to expand...

Wait did you manage to create one?
R

Nice WiFi name on the right.

My phone gets stuck on boot up. It takes literally minutes to get to the lock screen. Same thing happens with a hard reset.

Other than that, I noticed the power off screen looks different now with round rectangle buttons. It won't let me take a screenshot of it.

I'm glad they are slowing adding color back into iOS 7. it has too much white

Much prefer the minimal look icons
I

Really just shows you how far they were from being anywhere close to done when they debuted this OS....
G

I like the new settings icons at all. However, from that screenshot, I'm not sure what the colors represent exactly. Are they categorized somehow by color? Cellular stuff = green; local wireless stuff = blue; OS settings = grey; is that it?
U

I'm not sure how, but Apple took the iOS personality and snuffed it. The UI is ultra-boring, just like bauhaus architecture: it looks great, but you wouldn't want to live in it.

The UI has moved from delightful to cool. Using it makes me want to throw my phone away. It's like Apple has sucked all the joy out of the UI and replaced it with futura.

Unlock sound seems to be missing...

Cellular settings now displays data used by apps that have been uninstalled.

ZacNicholson said:
I'm glad they are slowing adding color back into iOS 7. it has too much white
Click to expand...

I agree, the colour makes it feel more 'whole'. The minimalist look is well too minimalist.
T

Did anyone else's default search engine change to Yahoo?
M

usarioclave said:
I'm not sure how, but Apple took the iOS personality and snuffed it. The UI is ultra-boring, just like bauhaus architecture: it looks great, but you wouldn't want to live in it.

The UI has moved from delightful to cool. Using it makes me want to throw my phone away. It's like Apple has sucked all the joy out of the UI and replaced it with futura.
Click to expand...

the design is getting better and better imo,
just wish I saw the final design, without going through beta 1-5. I wanna be wowed
wake me up when iOS 7 has launch
T

The settings icons are much better now. Having them all blue made it to hard to easily distinguish which was which. They almost melded into each other. This is a great change!

I have no doubt that iOS 7 is going to save the iPhone.

I mean, not that it needed saving … but now the software finally is on par with the quality of the hardware.

Also new in beta 5: iBooks app has been fixed. In beta 4 the search function was broken.
B