iPad Pro First Impressions: Surprisingly Light, But Screen Size May Be Unnecessary for Most

As journalists and bloggers leave the Apple media event in San Francisco, the first impressions of the brand-new iPad Pro have begun trickling out onto the Internet. Sites like Wired, Engadget, SlashGear, and TechnoBuffalo all got to go hands-on with the new tablet and came away with largely positive impressions of the device, with one of the only negatives being the large size of the device. At an unwieldy 12.9-inches, the consensus is that the iPad Pro may be too big for many users.

It's certainly as crisp and sharp as any display I've ever seen. If Apple's ultimate tablet goal is to build a piece of glass onto which you can project your hopes, dreams, and apps, the iPad Pro feels like a realization of that dream.

During the keynote, Apple execs talked a lot about how difficult this screen was to create--but you'd never know. It's smooth and fast; in fact, every part of the iPad Pro is smooth and fast. The $99 Pencil stylus feels like a particular triumph: It is, bar none, the most fluid and lag-free stylus I've ever used.
Click to expand...

The first big takeaway about the iPad Pro Wired noticed was that despite the tablet's size, it's surprisingly comfortable to hold in one hand. The site also noted that the new 2732×2048 resolution screen is "smooth and fast," and gave particular praise to the $99 Apple Pencil accessory the company also debuted during today's media event.

Still, despite its positives, Wired believes that using a tablet in the place of a desktop or laptop computer will always remain a lesser experience. They called some of the experience of iOS "clunky," and were unsure of whether Microsoft's new Word experience, shown off at the event as well, would actually be a selling point for the work-focused device.

The question will be, is it great for you? The iPad is still a tablet, and running iOS means it's still going to be a little clunky--using Word, I found myself wishing I had all my keyboard and mouse shortcuts handy and didn't have to keep picking up the Pencil or tapping the screen. And if we learned anything from the Surface, it's that the world might not be ready for this type of device just yet.
Click to expand...

Engadget also expressed surprise over the device's lightness, noting that the iPad Pro felt "lighter than it looks," but that in portrait mode, it can be a bit awkward and top-heavy. The site noted that the tablet's other accessory, the Smart Keyboard, provided some decent travel when pressing the keys down and overall felt like a step above other keyboards bundled in third-party case sleeves.

I know we tech bloggers say this a lot in hands-on posts, but it feels lighter than it looks. That's not to say I'd want to use this much in portrait mode; it feels a little too top-heavy in-hand. But in landscape, the height is actually on par with the iPad Air 2; it's just wider. That makes it pretty manageable in horizontal use, which I suspect is how most iPad Pro-optimized apps were meant to be used anyway.

And what of that keyboard? It's really too soon to put down a firm verdict, but tentatively, I like it. The cloth-covered keys feel nice beneath the fingers, and help give the illusion of control, despite the fact that these are otherwise some fairly flat buttons.
Click to expand...

SlashGear called the iPad Pro "incredibly, vastly, ridiculously huge," but that its thin size and easiness to hold gives it the feel of a science fiction "digital newspaper." The site also called the four speakers on the device "laughably strong," and appreciated that they automatically adjust and change when displaying the tablet's orientation. Similar to other opinions, SlashGear's biggest negative on the tablet is more of a caveat: "it makes far more sense as a content creation tool than one for consumption." 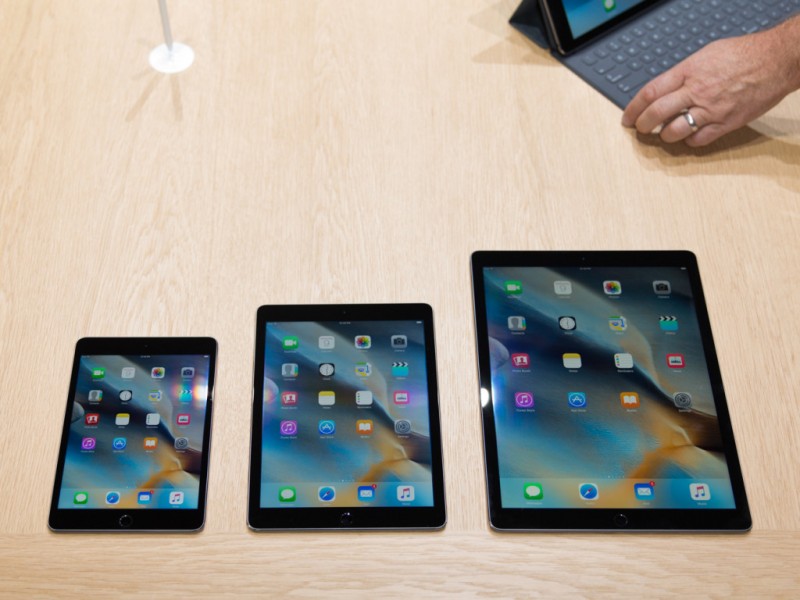 Everyone who wasn't at Apple's event will be able to see the iPad Pro for themselves when the device launches this November in Space Gray, Gold, and Silver color options. The new tablet will be priced at $749 (32GB) and $949 (128GB) for the Wi-Fi models, while a 128GB Wi-Fi + Cellular option will come in at $1,079.

Article Link: iPad Pro First Impressions: Surprisingly Light, But Screen Size May Be Unnecessary for Most

This is a wet dream for artist. I assume wacom is ******** bricks right now. now all we need is zbrush for iOS. will definitely get one when it comes out.
Reactions: BrodieApple, panther quest, theanimaster and 10 others

Does the "PRO" allow you to access the file system of the iPad?
Reactions: DaHarder, studio¹³¹, AppleScruff1 and 15 others

Curious how the keyboard stacks up to a Surface Pro 3 with Keyboard. Several of my coworkers use those and really like it. Albeit with one downside. Windows. But then the iPad Pro doesn't run OS X.
Reactions: rbrian, WWPD, Roadstar and 3 others

Count Blah said:
Does the "PRO" allow you to access the file system of the iPad?
Click to expand...

or work directly off files on an external drive or NAS?

The graphic designer in me says "very cool" although I don't know how practical this would be for me. Laptop is still much more convienient for everything except drawing.

Also, look at the gaps between the app columns. Good lord!
Reactions: DaHarder, BrandonHacks, Apple Human and 7 others

Really impressed with the iPad pro. But I wish they would bring back the mute/lock button.
Reactions: jb-net, Benjamin Frost, Mr. Donahue and 1 other person

As a DJ this is a no-brainer for me. My wallet however, is thankful it's not coming out until November.
Reactions: Hellenek, panther quest, Ghost31 and 6 others
S

Run real Photoshop and I might be interested.
iOS - don't call it "pro"...
Reactions: DaHarder, BrandonHacks, slyreptile and 14 others
S

Count Blah said:
Does the "PRO" allow you to access the file system of the iPad?
Click to expand...

I want a bigger screen for magazines, but maybe not $1300 want...
Reactions: Benjamin Frost, panther quest, rbrian and 2 others

Eweie said:
This is a wet dream for artist. I assume wacom is ******** bricks right now. now all we need is zbrush for iOS. will definitely get one when it comes out.
Click to expand...

Very true. I use a Wacom tablet with my Mac but if Apple creates a tablet and Apple Pencil for the Mac, Wacom will be gone sooner than later.
Reactions: WWPD and eyeseeyou
C 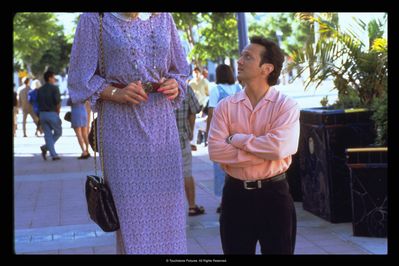 Just give me those features and specs in the 9.7" iPad and I'm sold. Especially those speakers.
Reactions: Benjamin Frost, panther quest, robertpetry and 11 others

MacRumors said:
in portrait mode, it can be a bit awkward and top-heavy.
Click to expand...

That continues to be my general feeling with my SP3. The wide screen aspect ratio exacerbates it. Of course the kickstand doesn't work in portrait mode.

Doesn't look like the iPad Pro solves that for me.

roland.g said:
Curious how the keyboard stacks up to a Surface Pro 3 with Keyboard. Several of my coworkers use those and really like it.
Click to expand...

At a casual glance, I'd say I like it better. The one thing like the least about the Surfaces is the keyboard, and the reason I don't like the keyboard is because the keys are all side by side without any spaces in between. I end up with a bunch of accidentally mushed keys because of it.

The iPP's keyboard has all those nicely spaced keys, which makes me like it more by default.

Hopefully MS will step up their game on this front and further refine what they've got now that they have a bit of competition on what's been their home turf.
Reactions: rbrian and Cameow

b0nd18t said:
Just give me those features and specs in the 9.7" iPad and I'm sold. Especially those speakers.
Click to expand...

b0nd18t said:
Just give me those features and specs in the 9.7" iPad and I'm sold. Especially those speakers.
Click to expand...

The speaker "boxes" took up a lot of space. I don't think they could put them in a regular iPad.
Reactions: rbrian and navier
P

So Pro that there's not a single AAA software for it. Too much lowly apps.
Reactions: SaaGua, Lesser Evets, TheHateMachine and 1 other person

ripoff of Microsoft Surface. Nice try Apple. You can get a tablet with a full OS for that price.
Reactions: SaaGua, BrandonHacks, AleXXXa and 15 others

You can copy and paste if this helps you:

"This product is not right for ME. Therefore it is not right for ANYONE! I am sickened to my core at the thought of people with different habits, needs and wants."
Reactions: Rique, driftless, alperiskender and 40 others

I liked a comment, as am sure others will come, from whoever doesn't get it.. it's un wieldy. Really? For who? you? I'm assuming you speak for everyone on the planet. Oh, wait, you damn sure don't speak for me. Let the BS GAMES of huff-n-puff begiung. Will somebobody sever that electraical cord , please. I, however, would like topersonally thank Microsoft for this gift. Yes MS

They had the foresite to see where these lager pads would be a boon to enterprise..Sadly the tech then was like changing a tire off a car. Luck Us few.. Steve Balmer came in to save the day and declare this is not MS! I won't bore you with the rest of MS history of .. nevermind.. I farted. Giggled.. Thank you MS for being so brilliant as to give up any good ideas you may not have ever been the ones to have. Just stole. Oh forgive that treaspass. Borrowed. Thay all did it.

All I have to do know is endure the endless BS from crap blog and money movers.. I need to invest in massive amounts of cheese to go with the impending onslaught of Apple DOOOOM to please me reading the whine..and.. and wait for the apps I want. and I have dreamed of them on a divice like this. I will have a few of these beasts. My Choice. Choice. Choice. One more time. Choice. This is the iPad I've been looking for.. to work so well with 'lil buddies.