iPhone 7 Plus, 128GB, and Black Models Prove Most Popular With Pre-Order Customers

Slice Intelligence has shared new data that suggests the iPhone 7 Plus has outsold the iPhone 7 in the United States, marking the first time Plus-sized iPhones have proven more popular than 4.7-inch models, based on e-receipt data from nearly 32,000 customers who belong to the research firm's panel. 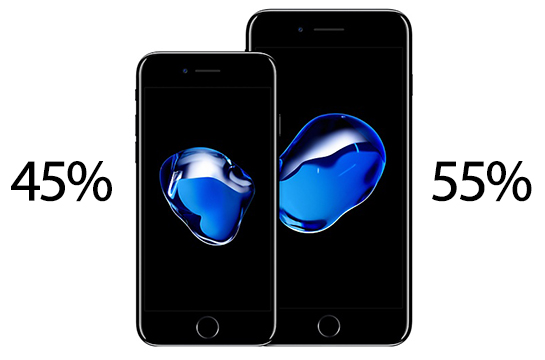 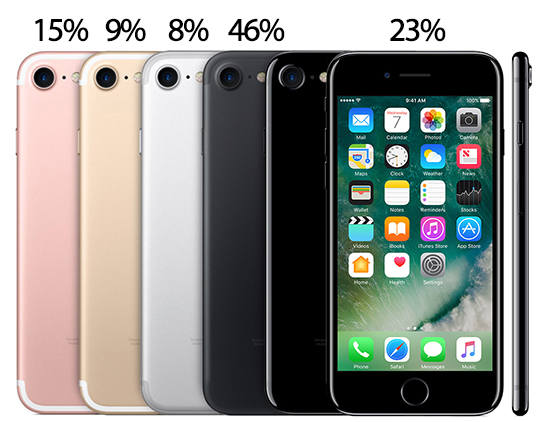 Meanwhile, given the lack of Space Gray this year, Black has emerged as the new most popular iPhone color, accounting for 46 percent of pre-orders. Jet Black is also a popular choice, selected by 23 percent of customers, although limited supply of Jet Black models has pushed shipments of Jet Black models to November, likely leading many customers to choose Black, Gold, Rose Gold, or Silver instead.

Rose Gold models, first introduced on the iPhone 6s, represented 15 percent of iPhone 7 and iPhone 7 Plus pre-orders, while Gold and Silver models trailed behind with 9 percent and 8 percent of orders respectively. 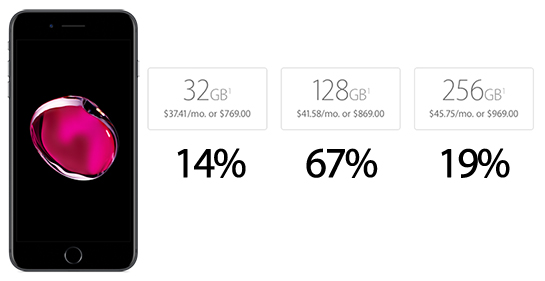 For the past three iPhone launches, over 60 percent of pre-orders over the first two days were on the middle storage option, according to Slice Intelligence. iPhone 7 and iPhone 7 Plus continue that trend, with 128GB proving most popular at 67 percent, followed by 32GB at 14 percent and the all-new 256GB tier at 19 percent.

Slice Intelligence tracks e-receipts from 4.2 million online shoppers in the U.S., allegedly the largest panel of its kind, that sign up for the company's value-added services such as Slice and Unroll.me. Slice, for example, is a free app for tracking packages, receipts, price drops, product recall alerts, and more.

Slice Intelligence has charts with more detailed information on its website.

It's not just bigger, it has more features...

It's got the DUAL cameras (and more internal RAM [3GB]).

We're not just comparing similar phones with different screens, the cameras makes it a different option. Some people might not even want/need the bigger screen but are choosing it for the camera.

If they'd made an SE model with a zoom lens, I might have purchased that, but not for the smaller screen....
Reactions: joonyaboy, AleXXXa, Oblivious.Robot and 4 others

I guess I bought the most popular one!
Reactions: dreamwife, BLUEBLASTER and xnu
S

Wow. I didn't realize how much of a minority my color of choice (gold) was.
Reactions: Brenster, thisisnotmyname and Da Hurdler

I'm holding out for the ceramic iPhone.
Reactions: Internet Enzyme, AleXXXa, S G and 14 others

I'm going from an iPhone 6 to an iPhone 7 Plus Jet Black. Even if the 7 and the 7 Plus were the exact same in every way other than size I would have still gotten the plus. After 2 years with the 4.7 inch screen I'm ready for something bigger!
Reactions: AleXXXa, Koodauw, enriquesh96 and 2 others

Interesting statistics. Personally, I've been rocking the 6 Plus for the last two years. Enjoyed the battery life, and it always fitted in all my pants. And no sign of Bend-gate either...

But after handling the SE from friends I've been missing that form factor, so I've opted for the middle ground with the standard 7 this time around. Thankfully they've added camera stabilization to it.
Last edited: Sep 15, 2016
Reactions: taxiapple, mmccorm4, GrumpyMom and 3 others

Wow really? You mean someone would knowingly order a 750p phone in 2016?!? The iPhone 7 is a disgrace. The Plus is the only option this year.
Reactions: AleXXXa, DanJBS and pcmacgamer
H

This goes a long way in explaining the shortages of iPhone 7 Plus. I don't think even Apple predicted that the Plus would be more popular than the non-Plus.
J

Not surprised in the slightest! Seems like a ton of people specifically got the 7Plus 128GB in Black, including myself!
Reactions: AleXXXa, d0nK, jerry16 and 2 others
P

Im sure some got black ones mainly so they can show off their new device. Soon enough that exclusive feeling will go away... Once they put phone in case that looks exactly same as last two iPhones.
Reactions: AleXXXa and Nr123*123

I was saying to myself the other day, the loss of the headphone jack, and what some (but not me) see as a lackluster update may impact overall demand, but I bet that at the next earnings call we will hear about higher average selling price. Everyone I know who is buying a new iPhone is getting the plus, mostly for the camera. Even people (like me) who have resisted getting the larger size up until now for portability reasons.

JosephAW said:
I'm holding out for the ceramic iPhone.
Click to expand...

Given the price premium the watch commands, I'm not sure we'll see a mainstream Ceramic phone anytime soon.
Reactions: JosephAW and BarredOwl

And this is news?
Reactions: d0nK

There is nothing wrong with the display. You cant even see the pixels from a reasonable viewing distance and the colors are more accurate than any phone on the market.
Reactions: CharlieJaggers, Lancetx, keysofanxiety and 16 others
C

and we have not even covered the Sprint/ATT network type phones yet.

add the deep blue color for next year...which will be the biggest seller
Reactions: Koodauw, taxiapple, 0029937 and 7 others

Oh no! I picked the matte black 128. I better cancel my pickup for tomorrow before I get accused of being a sheep!

But in all seriousness, I am very surprised that yellow gold is outselling the white model.
Reactions: CharlieJaggers, Koodauw, dreamwife and 5 others

scotttnz said:
Even people (like me) who have resisted getting the larger size up until now for portability reasons.
Click to expand...

lol you make it sound like it's a MBP.

Been using a plus for two years now, it's something you get use to quick. And the large screen is worth it.
Reactions: t1meless1nf1n1t, dreamwife and puckhead193
G

Can you imagine how the short supply and huge demand ( I would guess maybe more then 75% then now with the iPhone 7) will be with next year's iPhone 8 huge update with according to rumors, OLED/wireless charging/edge to edge screen...

Guess if you are not lucky with the pre order for iPhone 8 in 2017, you are looking at a delivery somewhere in February 2018
Reactions: Mactendo
P

1applerules1 said:
There is nothing wrong with the display. You cant even see the pixels from a reasonable viewing distance and the colors are more accurate than any phone on the market.
Click to expand...

That's his point why knowingly pay a premium for a display that is no longer considered premium. Can't use that good old "retina" marketing speak touting it as the best. When it is a lower quality display that shouldn't command top dollar. Apple needs to catch up to other companies when it comes to its iPhone displays.
Reactions: DanJBS
P

YES, I have (or will have) the rare silver model.
Reactions: jeremyisweary, CharlieJaggers, kiopoptr877 and 6 others

Didn't this weird mentality go out with the Ghz races of the 90s?
Reactions: sideshowuniqueuser, keysofanxiety, Weaselboy and 12 others

Why didn't they stagger their release in certain countries as they have done before? Either demand is insane or they weren't ready for this amount of orders.
Reactions: taxiapple

1applerules1 said:
There is nothing wrong with the display. You cant even see the pixels from a reasonable viewing distance and the colors are more accurate than any phone on the market.
Click to expand...