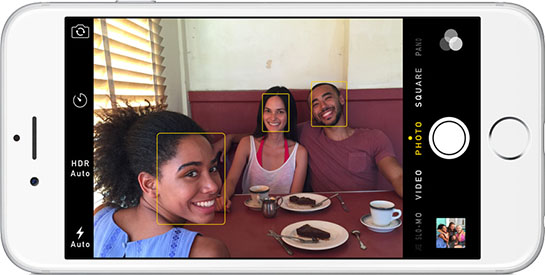 The scanner is said to add $10 to $15 per module to the iPhone 8's bill of materials, which coupled with the OLED display, glass casing, and other increased production costs, could make its retail price up to $100 more expensive than it would be without those features, if Apple looks to maintain a similar profit margin.

The increased costs are in line with a recent report claiming the iPhone 8 could cost upwards of $1,000 in the United States.

The research note said the 3D laser scanner could eventually be used for other purposes, such as augmented reality, but likely not until 2018 at the earliest.

One obvious and potentially most compelling use would be AR/VR experiences in which the user's hands and other real world objects are being scanned and integrated into a field of view provided by the iPhone mounted into a Google Daydream-like headset. This would open up many interesting entertainment and gaming experiences not available today and might give Apple something extra in an AR/VR accessory compared to Google and others.
Click to expand...

He also believes that Apple is likely to eventually open up a 3D scanning API to developers, who could use it to do "everything from determining your shoe size for online orders to helping make sure you are properly fitted on your bike."

Hall expects a strong iPhone 8 replacement cycle later this year, and he said an announcement about the product is possible as early as WWDC 2017, which kicks off June 5. Apple has not made any iPhone hardware announcements at WWDC since 2010, so treat this claim with a proverbial grain of salt for now.

Other rumors have suggested that Apple will embed Touch ID underneath the display as technologically possible.

Article Link: iPhone 8 Expected to Have 3D Facial Recognition Instead of Touch ID

Scanner in my 950XL, had in my Note 7. It's aggravating to use. Fingerprint is loads faster and easier. Y'all will see.

Yes I know "Apple will do it better" but the concept itself is pretty janky IMO.
Reactions: arturmeireles, johngordon, j3T and 22 others
6

Better be in addition to not instead off. What about paying for apps?
Reactions: jb-net, Val-kyrie, TimSHB and 8 others

replacing touchID? No. In addition? Maybe.
(possibly a stupid question: how would it work in extremely low light conditions/darkness ?)
Reactions: ILikeAllOS, CarlJ, Val-kyrie and 37 others

First they get my fingerprint, then they get my a 3D image of my face, next they get my DNA and can start cloning me. All for extra security... oh and little clones of me can buy more iPhones .
Reactions: The Captain, falcn, Hrebik1 and 28 others

Touch-ID is too convenient to go away. If anything, facial recognition should complement it, not replace it.
Reactions: jb-net, ILikeAllOS, johngordon and 32 others

Why fix what isn't broken?
Reactions: jb-net, WWPD, PublicEnemy and 7 others
B

Wonder if it'll still recognize me at 2am when I can't sleep, bloodshot eyes, bags, squinting, but just HAVE to see who posted a new funny meme on FB.
Reactions: Breezygirl, psac, GrumpyMom and 8 others

Looking forward to it, more curious to see what developers use the laser capabilities for (laser stud finder).
T

As someone who wears a mask in a hospital all day, I really hope this technology either A) somehow works regardless of the mask, maybe scanning the eyes or B) doesn't actually REPLACE Touch ID but rather comes alongside of it.
Reactions: The Captain, ILikeAllOS, aylk and 14 others

DrewDaHilp1 said:
Why fix what isn't broken?
Click to expand...

Because it's Apple.
Reactions: The Captain, flowave, aylk and 16 others
W

This 3d scanning is the first new feature I have been truly interested in beside water resistance since iphone 4
Reactions: xalea

jscooper22 said:
Wonder if it'll still recognize me at 2am when I can't sleep, bloodshot eyes, bags, squinting, but just HAVE to see who posted a new funny meme on FB.
Click to expand...

You have bigger problems if you cannot get sleep at 2am, you need to see a doctor and take some sleeping aids or just put the phone away from arms reach. You need help.
Reactions: marvz, Hrebik1, tridley68 and 1 other person

good for when driving

tigres said:
good for when driving

now now, lets not encourage anyone .
Reactions: Avieshek and Sasparilla

DrewDaHilp1 said:
Why fix what isn't broken?
Click to expand...

Something something about third party TouchID repairs...
Reactions: bwillwall

So what's gonna happen to Apple Pay? Can imagine people taking "selfies" at tills in order to pay their purchases...
Reactions: ILikeAllOS, eastmanweb, bwillwall and 12 others

Its far too soon to completely ditch touchID and only leave us with ancient passcode and face recognition. Talk about not working. Apple isn't the type to adopt this tech this early. Also doubt they are even removing the home button after they just made it taptic
Reactions: AsarTheGod

How will I pay for things securely if I need the phone on the reader and also have the phones camera facing my face? Almost no readers in stores are at such an angle to have both in alignment.

TouchID is great I hope they don't abandon it.
Reactions: aylk, CPx, xalea and 2 others
A

I'm surprised at this as it isn't necessarily more secure or convenient. When you pay with Apple Pay you'd have to make sure your face is in view of the camera(s) making it less convenient in my opinion.
Reactions: stephannikolic
I

coolbreeze said:
Scanner in my 950XL, had in my Note 7. It's aggravating to use. Fingerprint is loads faster and easier. Y'all will see.
Click to expand...

Just curious, how did your phone scanner work in the dark?

I use my iPhone at night or in a dimly lit room all the time and if the face recognition will not work there than that is not good.
Reactions: Breezygirl and Avieshek