iPhone X With New Dynamic Wallpaper Appears in the Wild 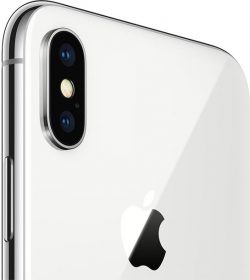 There are still 26 days to go before Apple officially launches iPhone X, but at least one person has already gotten their hands on one of the sought-after 5.8-inch devices, if a video shared on Reddit is anything to go by.

The short clip, embedded below, shows someone swiveling in their hand what looks like a silver glass-backed iPhone X with a new, previously unseen dynamic wallpaper on the lock screen.

As the handset is rotated, the padlock above the time visibly shudders as Face ID refuses to unlock, suggesting the person holding the phone is not the owner.

Speculation is rife among Redditors as to who the owner could be and how they ever got hold of an iPhone X so far ahead of the official launch next month.

According to the original poster, the video was uploaded from the San Jose area, California, making it likely that the clip was recorded by someone who knows an Apple employee with early access to the device. The iPhone X in the clip is also displaying an AT&T logo in the upper left corner, adding further weight to the suggestion this was recorded in the U.S.


Another iPhone X in the wild from apple
​
For the rest of us, pre-orders for iPhone X begin on Friday, October 27, with the device's official launch date the following Friday, November 3.

Looks legit to me.
Reactions: souzadias, ex0dus1985, WhatThe? and 12 others
Comment
N

Cool. I'm guessing there are quite a few Apple engineers who have one right now for testing purposes.

Only 3 weeks left until we have one in hand.
Reactions: iScone, WhatThe?, macTW and 1 other person
Comment

It looks fake, look closely on back cameras
Reactions: JosephAW and JM
Comment

Cool to see how quick the FaceID seems to work!


imran5720 said:
It looks fake, look closely on back cameras
Click to expand...

What about the back cameras makes it look fake?
Reactions: Chumburro2U, Cameroncafe10a, SoN1NjA and 7 others
Comment

Nowhere near how maturely Pixel XL 2 does, just random bubbles flying like a jellyfish since from iOS 7. Childish or Absurd?
Last edited: Oct 8, 2017
Reactions: paul4339 and SoN1NjA
Comment
I

What about the cameras? They look legit to me.
Reactions: Cameroncafe10a, RowellE, bunnicula and 1 other person
Comment
M

So just looking at the phone qualifies as an attempt to unlock?
Reactions: kht410, ct2k7, EedyBeedyBeeps and 1 other person
Comment

macjunk(ie) said:
So just looking at the phone qualifies as an attempt to unlock?
Click to expand...

So it’s just like my iPhone 5S with iOS 7 dynamic wallpaper but different color. Must be a boring week to begin with.
Reactions: allenvanhellen, JosephAW and User 6502
Comment

Have not updated to iOS 11, though dynamic wallpapers will be available on earlier model right ? It's 2017
Reactions: allenvanhellen
Comment

Still dont understand how this is considered a silver back. Looks like the old iPod / MacBook kind of white to me


MH01 said:
Have not updated to iOS 11, though dynamic wallpapers will be available on earlier model right ? It's 2017
Click to expand...

Nope they took em all out besides the colored ones on older devices
Reactions: bunnicula
Comment

It could slap some people here in the face and heys still say it’s fake. I don’t get it. Why does jealousy cause people to discredit authenticity? Happens every year when we see these posts. Baffles me. Sad.
Reactions: SR71, robbysibrahim, Chumburro2U and 10 others
Comment
I

Looks exactly like one of the hidden dynamic wallpapers that have always existed on the iPhone, but for some reason, Apple never enabled.

There was a Cydia extension to enable those. Was called Hidden Wallpapers or something like that. One of them is just like this.

Does this mean they enabled those, or that the iPhone is jailbroken? :-\
Reactions: bigjnyc
Comment

Looks awesome. Size seems to be just right and the silver is growing on me. Can’t wait for 11/3.
Reactions: WhatThe?, ILikeAllOS, szabogabor10 and 1 other person
Comment

Looks beautiful, and i'm looking forward to ordering mine.

One question i have is about the carrier logo. I thought that was removed from the status bar on the X. Was that just a rumor? I forget.
Comment
B

I wish apple would allow more of these wallpapers.
Reactions: RuralJuror and BWhaler
Comment

Someone is about to get fired for letting it in the wild
Reactions: JosephAW and BWhaler
Comment

And here is the Space Grey. Torn a bit, but this is the one I’m going for.

From what I heard, we should say thanks to Anurag who is taking the video of the X. (Hopefully he doesn’t get the owner fired though)
Reactions: ILikeAllOS
Comment
N

Labeno said:
Someone is about to get fired for letting it in the wild
Click to expand...

Why? Its not a secret anymore.
Reactions: WhatThe?, SoN1NjA and User 6502
Comment
S