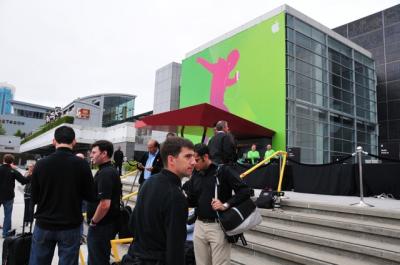 Apple's Let's Rock event kicks off shortly. Live coverage will be provided at the following links:

MacRumorsLive.com will return for Macworld San Francisco 2009 in January.

Some last minute notes and links:

- Apple Stores are down
- New Interface? for the iPod Nano
- New Nanos to have accelerometer? "One of those people described a function by which the iPod's 'shuffle' function is invoked when a user physically shakes the player."

- Our forums will remain open for ongoing discussion.
- SMS updates will be provided through Twitter.com/MacRumors (instructions).
- Visit TouchArcade.com for iPhone and iPod touch gaming news and reviews.

The accelerometer in the nano may also be for determining the orientation for video playback.
Comment

I just want GPS in an iPod Touch.
Comment
M

Yet more new ipods, I'm finding it hard to get excited.
Comment

Come on Apple bring out some more cool products tonight, like the ipod and iphone!!!!!

I wonder what is final destination for iPods/iPhones in few years...
Comment
C

TheSpaz said:
Will there be SMS message updates?
Click to expand...

i don't even know what i want anymore . . .
Comment

iPod Nano with an accelerometer? That is butt-tarded. I like cool aesthetic features, but lets spend our energy on some function as well, okay?
Comment
D

Hmm little chance that this new nano is going to work with the current Nike+iPod sports kit I'm guessing. Does anyone recall/know what happened with past iPod updates re Nike+? Eg: when the iPod Fatty came out, did Nike release a new kit? Or was it just some kind of firmware update. Any insight people have would be appreciated.

I bought an old nano last week in case, so that if it does work, I can take it back unopened to get a new one, and if it doesn't, I can keep the old one. Birthday present you see. Grr - people need better timed birthdays.
Comment
O

mark88 said:
Yet more new ipods, I'm finding it hard to get excited.
Click to expand...

Yeah, upgrading my old 20GB or 60GB iPods won't make the quality of the music any better, will it?

I know it won't make the artists I have on my current iPods any better at what they do.... I don't need an iPod update.... I NEED a new MBP !!! I guess I'll wait a little longer.
Comment

iLounge will also be at the keynote with live coverage.
Comment

- New Nanos to have accelerometer? "One of those people described a function by which the iPod's 'shuffle' function is invoked when a user physically shakes the player."
Click to expand...

Nifty feature! Only problem I see is running will sound like a skipping CD without an option to toggle this off directly in the iPod Nano's menu system.
Comment
W

Arn should use the other image from Gizmodo since it shows the poster better and also "tells a story".