Microsoft co-founder Paul Allen passed away today at age 65 following complications from non-Hodgkin's lymphoma. Allen earlier this month announced that he was again undergoing treatment for the cancer, which he was first treated for in 2009.

A childhood friend of Bill Gates, Allen co-founded Microsoft with Gates in 1975. He worked at Microsoft until 1983 when he faced his first fight with cancer after being diagnosed with Hodgkin's lymphoma. 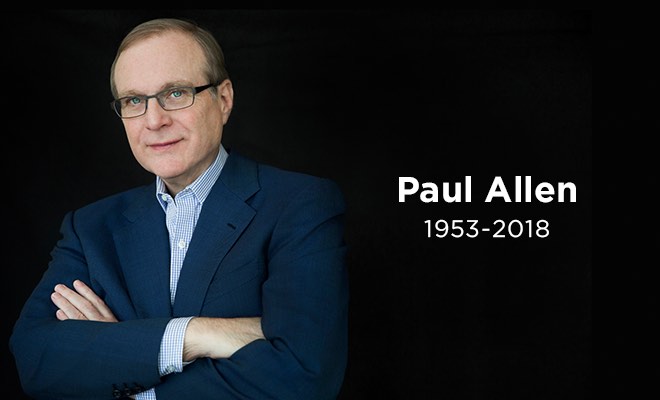 After his time at Microsoft, Allen used his wealth to invest in real estate, aerospace, sports teams, and filmmaking. Allen was the owner of the Portland Trailblazers and the Seattle Seahawks, as well as part owner of the Seattle Sounders FC. He operated Vulcan Real Estate, funded multiple sports venues, and owned Vulcan Productions, a television and film production company.

Following his death, Microsoft CEO Satya Nadella said that Allen's contributions to Microsoft and the tech industry were "indispensable."

Paul Allen's contributions to our company, our industry, and to our community are indispensable. As co-founder of Microsoft, in his own quiet and persistent way, he created magical products, experiences and institutions, and in doing so, he changed the world. I have learned so much from him - his inquisitiveness, curiosity and push for high standards is something that will continue to inspire me and all of us at Microsoft. Our hearts are with Paul's family and loved ones. Rest in peace.
Click to expand...

Bill Gates said that Allen wasn't content with starting one company, and instead channeled his intellect and compassion "into a second act."

"I am heartbroken by the passing of one of my oldest and dearest friends, Paul Allen. From our early days together at Lakeside School, through our partnership in the creation of Microsoft, to some of our joint philanthropic projects over the years, Paul was a true partner and dear friend. Personal computing would not have existed without him.

But Paul wasn't content with starting one company. He channeled his intellect and compassion into a second act focused on improving people's lives and strengthening communities in Seattle and around the world. He was fond of saying, "If it has the potential to do good, then we should do it." That's the kind of person he was.

Paul loved life and those around him, and we all cherished him in return. He deserved much more time, but his contributions to the world of technology and philanthropy will live on for generations to come. I will miss him tremendously."
Click to expand...

Our industry has lost a pioneer and our world has lost a force for good. We send our deepest condolences to Paul's friends, the Allen family and everyone at Microsoft. - Tim Cook (@tim_cook) October 15, 2018
Click to expand...

We lost a great technology pioneer today - thank you Paul Allen for your immense contributions to the world through your work and your philanthropy. Thoughts are with his family and the entire Microsoft community. - Sundar Pichai (@sundarpichai) October 15, 2018
Click to expand...

Very sad to hear of Paul Allen's passing. His passion for invention and pushing forward inspired so many. He was relentless to the end. My heart goes out to Paul's family and friends. - Jeff Bezos (@JeffBezos) October 15, 2018
Click to expand...

On behalf of Allen's family, his sister Jody Allen also shared a statement:

"My brother was a remarkable individual on every level. While most knew Paul Allen as a technologist and philanthropist, for us he was a much loved brother and uncle, and an exceptional friend.

Paul's family and friends were blessed to experience his wit, warmth, his generosity and deep concern. For all the demands on his schedule, there was always time for family and friends. At this time of loss and grief for us - and so many others - we are profoundly grateful for the care and concern he demonstrated every day."
Click to expand...

Over his lifetime, Paul Allen gave away more than $2 billion through the Paul G. Allen Family Foundation and other charitable efforts, funding scientific research focused on the brain, multiple wildlife conservation projects, ebola research, the arts, and education.

The bad ass had a submarine. Legend.
Reactions: Sweetsauce, obu90210, Jayderek and 5 others

He helped shape a generation and an industry. Most could never think of even doing one of those things.
Reactions: Lopov Jack, M5RahuL, Jovijoker and 7 others

Another genius gone, respect & strength to the family.
Reactions: nepalisherpa, Jovijoker, djbuddha and 3 others
J

65 years old is way too young to be gone from this world. My sympathies are with the Allen family.
Reactions: Lionel Messi, RuralJuror, M5RahuL and 23 others
T

Rest in Peace, Mr. Allen. Condolences to his family, friends and his brother in Micro, Bill Gates.
Reactions: Jovijoker, Mr. Retrofire, djbuddha and 1 other person
H

Sadly another person dies from cancer treatment. When will the madness end?
Reactions: !!! and nvmls

Another Visionary, Paul Allen, will be missed!

Took a picture of one of his yhats in Ft Lauderdale. It was there for updates, had a helicopter. Even with extensive resources we cannot escape death. No point now speaking ill so Rest In Peace.

HardRain said:
Sadly another person dies from cancer treatment. When will the madness end?
Click to expand...

Unrelated question: do you find that people use the word “woke” more frequently when you’re around?
Reactions: mijail, Lionel Messi, drumcat and 17 others
C

HardRain said:
Sadly another person dies from cancer treatment. When will the madness end?
Click to expand...

Sad to hear this. Rest well.

Good to see Jeff and Tim chiming in. Besides him and Gates they used to hang out with a guy called Forrest Mims in New Mexico. Awww, the olden days.
Reactions: trellus and DeepIn2U

I feel like i have been blessed to grow up in the era of technology giants that changed the world! Paul Allen will be remembered as one of these.
Reactions: George Dawes, trellus and DeepIn2U
W