Mozilla announced the launch of Firefox 3 web browser today. Firefox 3 is said to incorporate over 15,000 improvements and claims to be over two to three times faster than its predecessor.

Were really proud of Firefox 3 and it just shows what a committed, energized global community can do when they work together, said John Lilly, CEO of Mozilla.
Click to expand...

Firefox 3 is available for Mac OS X, Windows and Linux as a free download at Mozilla.com.

Firefox 3 is awesome. As a switcher, FF is warm and familiar. I just can't get down with Safari. I keep trying -- everytime I click a link in Mail I try. But it's not happening for me.
Comment
P

From what I can tell, it's faster than Safari 4 with SquirrelFish but the fonts look much bigger than in Safari and because of that, don't look as good.

this firefox is really great.. just love the interface. but i am too used to safari already..
Comment

Speed is much better from the previous version
Comment
B

Same here.... And the Location bar is now called the Awesome bar
Comment

pyr0sphere said:
From what I can tell, it's faster than Safari 4 with SquirrelFish but the fonts look much bigger than in Safari and because of that, don't look as good
Click to expand...

Yea, I just downloaded and noticed it. Weird.

I'm a Safari user, I'll give Firefox a try. I've always had it as a backup but never really used it. I'm happy with Safari and it integrates better then Firefox. But I'll give it a try, see how I like it.
Comment
S

Im a die hard Safari user but I must say that FF 3 is a much improved version. Ive been using it and I like the new features. Its definitely speedy and more responsive!
Comment
B

I hate to turn people away from a brilliant Apple product, but here are some extensions that will make Firefox more like Safari:

Hmmm , when would we see an IE upgrade, lol?
Comment
F

I hate Safari for Windows. It's just so dark and hard to read, so is iTunes for Windows.
Comment

It didnt import all my last Firefox version(2) bookmarks from the toolbar into #3..There is no export function on # 2..HOw do I get em into #3..?
Comment
D

I have been using firefox since it came out and i live by it, but this is an AWSOME improvement from firefox 2.
Comment

Platform native look and feel? It looks awful on my Mac. However, it is pretty damn fast.
Comment

A little bit disingenuous for Mozilla to suggest that Firefox was created to promote openness, innovation and opportunity on the Web and Safari wasn't.

Both browsers share that similar goal. Considering Webkit (the engine behind Safari) has been a good deal more innovative than Mozilla recently in bleeding edge standards support (offline databases, HTML 5, CSS 3 etc.) and Javascript performance it should also get a tick. 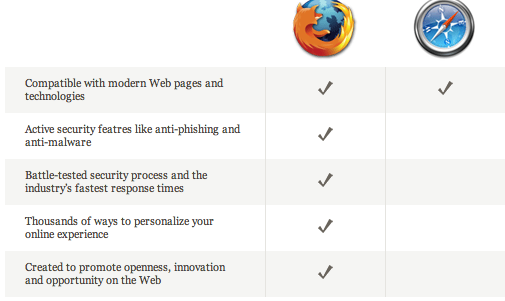 And before people rush to tell me that Apple has misrepresented facts in the past in adverts as well. I already know, but that is irrelevant, the discussion is about Mozilla, not Apple.
Comment

Well, I looked around it... I think I'll stick with Safari 3 though...

something that it drew to my attention though is that Mac Rumor's site favicon has an ugly white box around it. I think you aught to make it transparent arn... (or whoever it is that would be the person who would do that.) Instant Alpha aught to make it pretty easy.
Comment
F

Oh no, just installed Windows version. Reminds me of IE 7. How do I downgrade?
Comment

The look & feel isn't THAT native:

(Which is a shame since one great thing about a Mac is how most apps share certain predictable behaviors--including visual ones.)

Faster than Safari 4 at WHAT?

The latest WebKit build is almost twice as fast at JavaScript as Firefox 3, and the WebKit team is just getting started with SquirrelFish.

The UI is hideous. The Prefs panels look bizarre. Font rendering is still balls.
Comment
A

According to this article, Safari is still the fastest web browser on the Mac, but I would still have stuck with Safari regardless.
Comment

bobertoq said:
I hate to turn people away from a brilliant Apple product, but here are some extensions that will make Firefox more like Safari:

Along with those suggestions, Firefox might just be my new default. Fantastic improvement over Firefox 2.

I've got AdBlock but I am getting ads everywhere... what's up with that? And yes it's on.

When I first installed AdBlock it asked me to subscribe to some websites, but I didn't chose any, and I think that's why no ads are being blocked. But I can't figure out how to get that pop up to show again so I can chose to subscribe.
Comment
R

Safari 4 (with SquirrelFish) is way faster than Firefox 3...
Comment
B

I was a dedicated Firefox user back on the PC box, but have been on Safari since I switched to my mac about three years ago.

I would love to fool around with this newest release and try and find some add-ons to possibly promote my use of firefox instead of safari, but unfortunately I cannot. I must've had a corrupt download or something, because firefox crashes each and every time I try and open it.