Multiple RAIDS (all of a sudden) running extremely slow, at work, and at home.

I have been using a QNAP NAS 6-bay setup at work for the past 2 years with R/W speeds upwards of 1.4GB/Sec (thanks to 2TB cache and 32GB Ram in the NAS). Until about a month ago those speeds were constant. Now, all of a sudden, I'm hitting 100MB/sec with absolutely no changes to my setup, connection, drives, software, etc. I have no idea what's happened, but it's a massive problem to my editing workflow. I've checked NAS software and updated. I've (of course) restarted the system. I've done a performance check in the NAS software and each drive is individually showing R/W speeds at 200+MB/Sec, so how in the world am I getting bottlenecked at 100MB/Sec?! Running at work on a 12-core 2019 Mac Pro with AMD RX 6900 XT GPU.

Similarly, I had my traditional RAID at home fail, so I purchased new drives and that RAID is having the same problem! I'm pulling max 180MB/Sec in a 5-bay RAID 0. It's connected via Thunderbolt 3 and used to get between 700-900MB/Sec. I'm pulling my hair out over this and have no idea where to even start to get help. The drives are all 7200RPM with 256MB Cache. Running at home on a 2013 6-core d700 Mac Pro. 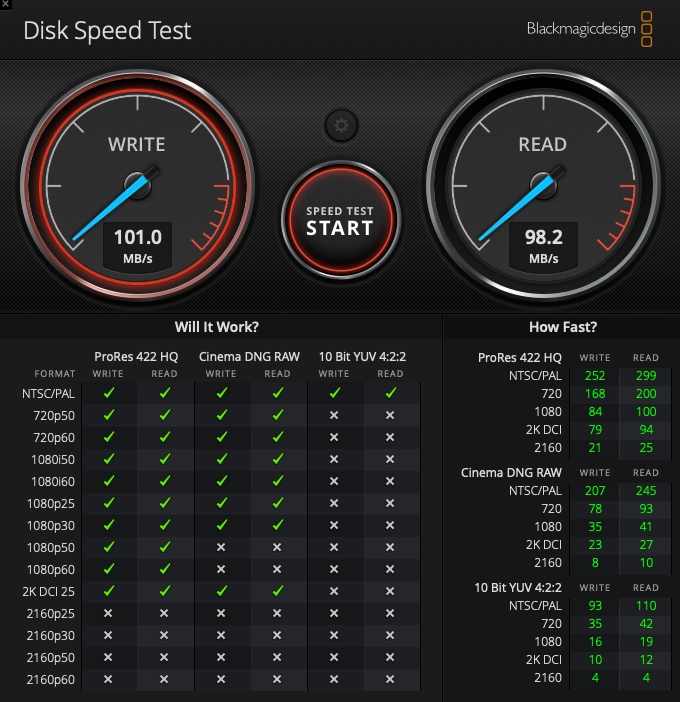 When I start having issues like this I look at how full the OS drive is. Sometimes it get loaded up with cache type files, backup data, things you don't expect.

Otherwise, how full is the RAID? Over 50% they have a tendency to slow down. By 80% full it can be noticeable. Is the trash empty? One flakey drive in a RAID 0 can play havoc.

I forget what size test files Black magic uses, but some of the issues only show up with larger file sizes.
J

OS Drive has about 40% available (200GB). The new RAID is empty as I've been testing it before I commit to dropping 14TB of data onto it. The old RAID is giving me the same throttled results and is half full. The new drives all check out on my hard drive monitoring software. I've always run a 5GB file test on BlackMagic, always with the same consistent high speeds on all my RAIDs. Not sure what to do.
C

Do you also get 100MBps testing the internal drive? Otherwise what devices are connected? Disconnect everything except the RAID and test. Try a different port. Reload the software. Do you have auto software update turned on and could the QNAP been updated? Otherwise perhaps check in the peripherals forum https://forums.macrumors.com/forums/mac-accessories.77/.

I also hear of reports of QNAP devices being infected with malwear.