iFixit has shared a brief teardown of Apple's new 9.7-inch iPad unveiled last week, and unsurprisingly, the tablet looks just as much like an original iPad Air on the inside as it does on the outside. 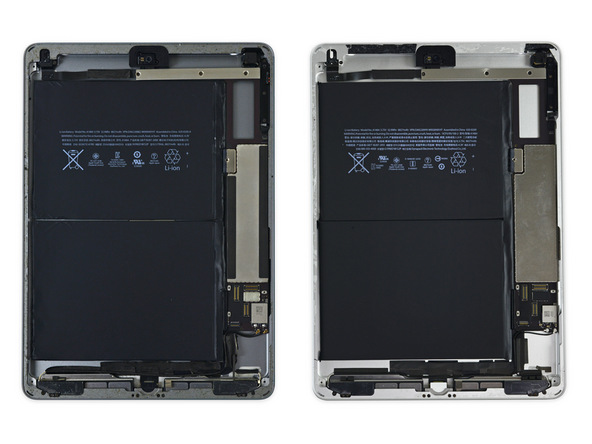 In the side-by-side photo above, iFixit noted the original iPad Air on the left has a slightly larger Wi-Fi module compared to the new 9.7-inch iPad on the right, but otherwise the tablets look virtually identical.

iFixit said the new 9.7-inch iPad remains difficult to repair due to the front panel being glued to the device and strong adhesive holding everything in place. One plus is that the battery is not soldered to the logic board.

The new 9.7-inch iPad is all about price. It's the cheapest new tablet that Apple has ever sold, starting at $329, yet with a brighter display and a faster A9 processor compared to the now-discontinued iPad Air 2.

The fifth-generation iPad, as it is officially known, is also somewhat thicker and heavier than the iPad Air 2 since it lacks a fully laminated display with anti-reflective coating in order to keep costs down. 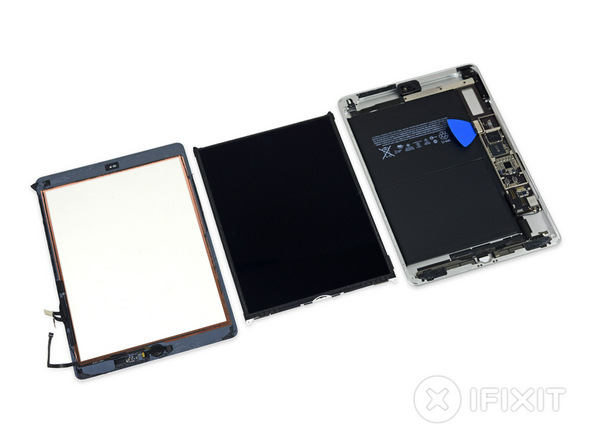 The new 9.7-inch iPad can be ordered now on Apple's website in the United States and dozens of other countries.

I knew it!
Reactions: dan110, Demo Kit, Avieshek and 1 other person

Old is the new.
Reactions: dan110, Wowereit, Cameroncafe10a and 8 others
K

To be perfectly honest, even when i try out the "new" iPhones, they are basically the same as the old iphones.

Apple is just all about coming up with new color products now.
Reactions: amegicfox, dan110, BenGieCruz and 33 others

Hence the price, no complains.

it is really weird tho as this is the most un-Apple thing Apple did.
Reactions: ysr, bobob, Preclaro_tipo and 10 others
E

South of the Border, West of the Sun

True, but it has to be seen in the context that Apple, like no other, could -and still can- deliver high-end products for a (relatively) low price.
EDIT: Although I have to admit that some of their Macs don't follow neither strategy.
Reactions: macguru212, Jamalien, Avieshek and 1 other person

In other words, after 2 years they've been able to make 1 laptop and re-release their iPhone and iPad.
Yeah, big plans.. can't wait for that TV and Car they're working on..
[doublepost=1490877856][/doublepost]

Yep, it's turned into a fashion company now. Pro users? WHAT? .. no cli for you! who needs a file system.. get out!
Reactions: Niklas_nick, huperniketes, dilbert99 and 34 others

All praise be due to the profit margin king Tim Cook

Really happy he's getting use out of that unused stock of iPad's
Reactions: amegicfox, Niklas_nick, dan110 and 14 others

I know this is a joke about Apple's lack of tons of new features or whatever, but I think after the 5S major everyday performance improvements started to die down. I think technology just hit the point that, so long as botchy software isn't messing with things, an A7 is more than the average person needs anymore. Or at least I can hardly tell a difference between my 5S and iP7+ anyway performance-wise
Reactions: dan110, iDento, verpeiler and 1 other person

No complaints here. Upgraded CPU and lower price make this a perfect replacement for my dad's iPad 3.
Reactions: bobob, appleunderpants, Preclaro_tipo and 18 others

So does this iPad have NFC or is this part of the motion co-processor?

Well, at least the battery size is also the same as the original Air, so paired with the less power hungry A9 it should outlast the Air 2 which already has brilliant battery life.
Reactions: appleunderpants, ackmondual, Jd3774life and 3 others
S

The iPad's naming structure has been such a mess. iPad, iPad 2, the new iPad, iPad with Retina Display, iPad Air, iPad Air 2, iPad

It looks so stupid but I like that they have finally sorted it out. Makes sense to have an iPad Mini line, an iPad line, and an iPad Pro line.
Last edited: Mar 30, 2017
Reactions: amegicfox, ProwlingTiger, dan110 and 16 others

Well at least I could upgrade my original-Air to this iPad, for all the modern enhancements at a modest price. And most likely still use my leather Apple iPad cover.

Wow, how times have changed at Apple; at least this particular one is a positive for we thrifty folk.

I think it's great that Apple are bringing back proven hardware in a new combination at a lower price.

I would love a Mac Pro SE that took this approach - up to date specs in the old 5,1 form factor for a budget price... yes please.

And not to get into political stuff, but given the UK (where I am)'s political/economic situation, it's especially important if Apple wants to retain its level of sales here, because the price rises on existing products threatens to seriously damage Apple in the UK IMHO. Of course so does having ancient computers at those inflated prices too, but that's a whole other issue by itself.
Last edited: Mar 30, 2017
Reactions: Niklas_nick, kazmac, VTECaddict and 24 others

Prices of components come down over time it would be interesting to see what the increase in profit is between this Ipad and if they had just lowered the price of the AIR2. I bet it isn't much
Reactions: HJM.NL
B

I guess the new iPhones are the same as the old ones in the same way windows 10 is the same at windows XP.
Reactions: Avieshek, dannys1, AxiomaticRubric and 1 other person

Floris said:
In other words, after 2 years they've been able to make 1 laptop and re-release their iPhone and iPad.
Yeah, big plans.. can't wait for that TV and Car they're working on..
[doublepost=1490877856][/doublepost]
Yep, it's turned into a fashion company now. Pro users? WHAT? .. no cli for you! who needs a file system.. get out!
Click to expand...

Mate, if you need command line for iPad, have you tried Prompt by Panic? No, you can't use it for local work, but if it's a remote terminal you need, it's very nice.
B

Seriously the iPad isn't a priority for Apple and the lack of innovation shows it.
Reactions: amegicfox, Niklas_nick, dan110 and 8 others

an old product disguised as new. COURAGEOUS!
Reactions: amegicfox, huperniketes, dan110 and 11 others