New Beats Products to Debut Alongside iPhone 7 on September 7

Apple plans to unveil new Beats by Dre products at its upcoming event set to be held on September 7, reports iGeneration. The news comes courtesy of an email that was mistakenly sent to the site from the Beats PR team, which iGeneration originally provided a screenshot for but was asked to remove.

The email announced the Apple event and specifically said "a selection of new Beats by Dre products will be unveiled." 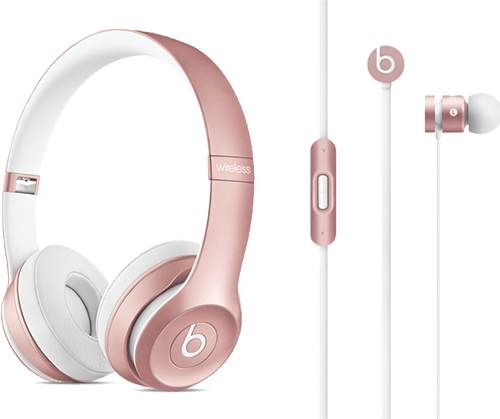 It isn't known what new Beats products Apple has in the works, but it seems likely the company will debut both new wireless headphones and Beats headphones that adopt Lightning connectors, as the iPhone 7 and 7 Plus will not have a headphone jack. Apple was recently granted a number of product certifications from the Eurasian Economic Union, and three new Beats headphone models were among them.

Apple is also working on a set of wireless "AirPods" earbuds, which are not likely to be sold under the Beats brand. It is not clear if the AirPods are going to be announced at the September 7 event, but rumors suggest they are fully wireless with no connective cord between the earpieces, much like the Bragi Dash.

It appears Apple plans to offer a range of different jack-free headphone solutions for iPhone customers alongside the iPhone 7 and the iPhone 7 Plus. Along with new Beats and the rumored AirPods, Apple is also said to be planning to ship its two new smartphones with Lightning-equipped EarPods.

This is exciting to me. I love my Beats headphones and would jump on some true wireless ones, ala Bragi, in a heartbeat.
Reactions: Dwalls90, Avieshek, Truefan31 and 1 other person
R

"We've removed the headphone jack from the iPhone, and now we've revolutionized Beats by removing their headphones. You can now have the high-profile look of Beats, all without the sound. We call them 'BeatsAir'."
Reactions: Ladyc0524, JPLC, imageWIS and 46 others

I'll get a pair in blue. All about that bass
Reactions: Mike MA
Y

While Beats are generally overpriced garbage, if Apple poured some legitimate research and development into either making Bluetooth audio better or lightning audio clearly superior to the analog headphone jack - and released the resulting products under the Beats brand - I could picture myself CONSIDERING buying a set of Beats headphones.
Reactions: VMMan, ShinySteelRobot, ksnell and 28 others

Woohoo, I love the week heading up until announcement day with all these leaks and drama!
Reactions: Demo Kit, ILikeAllOS, thekeyring and 12 others
S

Makes sense considering their wired range would need to allow for the new iPhone.

Well of course. gotta have a jump on everyone else.

Pretty excited about this...my wife's cat just chewed up my last pair. Although they're no "hi-fi" grade cans they are perfect for the morning jog.

This is going to be a lot of announcements...Beats, iPhone, iOS 10, Apple Watch 2, watchOS, macOS
Last edited: Sep 1, 2016
Reactions: TimSHB

Also think they should improve Beats headphones further. They need an around-ear version to compete with the Bose QuietComfort range comfort-wise and with true noise-cancelling software and hardware that's up to par. Also, they should redo Beats headphones across the board out of aluminium.

TMRJIJ said:
All about that bass
Click to expand...

No Treble!
Reactions: Demo Kit, imageWIS, ackmondual and 13 others

So you really believe with the large amounts of leaks, videos...ultimately proof of no headphone jack, that there is still a chance of having it in the iPhone? Do you? Pretty much confirmed already....
Reactions: Adithya007, Oblivious.Robot, Wowereit and 3 others
R

We changed the connector so you can buy your headphones all over again in new colours!
Reactions: ob81, Demo Kit, JPLC and 32 others
M

If Apple comes out with wireless earbuds, they better redesign them with around the ear hooks...cause their ear pods now are constantly falling out of my ears. If they have no wires, I'm gonna lose a lot of money.
Reactions: pentrix2, 24601, pike908 and 1 other person
6

I'll have my Senheisser monitors on mute for that then. Quality in-ear monitors with a beautiful jack, connected to my Apogee Duet.
Reactions: Mr. McMac, mkeeley, pentrix2 and 2 others
S

MacRumors said:
Apple is also said to be planning to ship its two new smartphones with Lightning-equipped EarPods.​
Click to expand...

No, i don't think there's any evidence for this...

If Tim is to have any chance at all of convincing the audience that the loss of the 3.5 jack is not to be mourned, it will be by showing wireless technology as the solution. Whatever form that takes.

The next iphone will either have wireless earphones (apparently called AirPods) or no earphones in the box.
Wired lightning earphones will not be made by Apple.
Reactions: HArzeh and pentrix2

After trying a cheap pair of wireless headphones I can say with confidence that I am totally ready to cut the cord.

Just need ease of use, ease of charging and a decent sound!
Reactions: esp718, kerrikins and Ghost31

As much as I don't like all the news surrounding the new iPhones, this event is going to be anything BUT boring. It's going to be hella exciting to see if Apple can pull "it" off or not. This is the first tech event I'll ever be watching, that's for sure.
Reactions: Jakexb
A

i hope they use a lighting port as the way to charge instead of mini usb - 1 chord to do everything - both charge and play
Last edited: Sep 1, 2016
Reactions: Truefan31, DotCom2 and _mdavenport

Have owned a pair in the past. My m50x's were half the price and WAY better.

In saying that, if Apple did fix the beats brand and make legit killer headphones, I'll definitely get a pair. For now, they're all marketing and less 'sounding great'.
Reactions: VMMan, TimSHB, mkeeley and 3 others