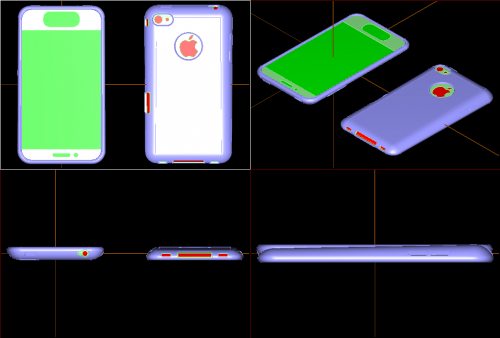 MobileFun.co.uk publishes two case designs that are claimed to be for the upcoming iPhone 5. The new designs seem to show that the iPhone 5 will carry a number of changes including a larger screen, curved/sloped back, and larger home button area. 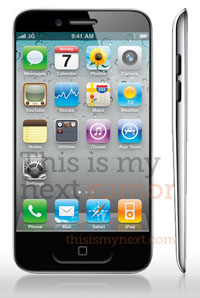 These design aspects were previously reported in April by ThisIsMyNext. Their report at the time claimed many of the same features:

the home button is doing double duty as a gesture area; this falls in line with testing we've seen for gestures on the iPad, and our sources say that gestures are definitely coming in a future version of iOS. The home button will likely be enlarged, but not scrapped altogether. Furthermore, we're hearing that the screen on the device will occupy the entire (or near to it) front of the phone, meaning almost no bezel. Our source says the company is doing very "interesting things" with bonded glass technology, and has been exploring designs where the earpiece and sensors are somehow behind the screen itself, making for a device where the display is actually edge-to-edge.
Click to expand...

The images do seem to be circulating from Chinese case manufacturers. The above image was posted by a Norwegian accessory manufacturer just the other day. This is the same image that MobileFun.co.uk also received and posted.

We suspect all of the images and information are coming from a common source, but we don't necessarily believe it to be true. At the time of ThisIsMyNext's posting, we received a reliable tip that this is not what the iPhone 5 will look like. As well, several other credible news outlets have said that the iPhone 5 will "look largely similar to the current iPhone 4".

Moral of the story is, no one knows until Steve stands up on stage and has it in his hand. Either that or it gets lost in a bar again.

I hope not because the mockups are damn ugly.
W

theres no way after that much time they will release the same phone! its going to be a new design so get over it 4 owners!
T

So many rumors. Thank god I am going on holiday soon and will get away from 'em

adztaylor said:
Moral of the story is, no one knows until Steve stands up on stage and has it in his hand.
Click to expand...

Either that or it gets lost in a bar again.

adztaylor said:
Moral of the story is, no one knows until Steve stands up on stage and has it in his hand. Either that or it gets lost in a bar again.
Click to expand...

True that bro, true that.

Apple is laughing all the way to the bank with the freebie underground buzzzzzzzzzzzzzzzzzz. Like he song lyric, "loving every minute of it"
T

This thread was posted already by another forum member :

If the iPhone 5 looks anything like the mockup, then I'm sticking to my iPhone 4.
T

What? This title makes no sense.
W

That mock up is ugly!!! I hope the real thing looks better. But i dont like the return of the curved back.

winston1236 said:
theres no way after that much time they will release the same phone! its going to be a new design so get over it 4 owners!
Click to expand...

That's what I would like to believe. If they're holding off for more than a year (we all know that's like centuries in the tech world) before a new phone is announced, I'd be a little disappointed if all I get, after such a long wait, is just nothing more than some extra RAM, storage, and 3 more megapixels in my camera. Keepin my fingers crossed.
R

IDK everyone is saying this is ugly as can be... I personally would like a bigger screen, thinner, and get rid of the glass back... I like my phone outside of a case and if it had a metal back then I wouldn't have to. (not like the itouch metal back)

Bring on a new design!

There is 0 consensus about the new phone. Despite hearing a million rumors on it, I have no idea what new features it will have nor what it will look like.
I

srxtr said:
if the iphone 5 looks anything like the mockup, then i'm sticking to my iphone 4.
Click to expand...

Isn't it possible that this is the next Touch and not the next iPhone?

mockups look always ****, it will look def better seeing it out in the wild i wouldnt mind a touch sensitive button actually as my menu button is "broken" on my 2nd iPhone 4 already.

This is an unlikely design. Very few cases could be designed that would fully protect the device and snugly keep it in the case at the same time - and it would be very hard to hold the phone w/o smudging up the screen. There is a point at which you CAN get TOO THIN in a device. If it's too light weight and not substantial enough - it just gets hard for an adult hand to comfortably hold.
M

I hope they don't return to a curved back. I love the symmetry of the iPhone 4 and how it lays flat. I do think an aluminum casing like MacBooks have would be really cool. A bigger screen is definitely welcome.

At the end of the day though I think the iPhone 4 has a beautiful design and if they didn't change it, I wouldn't be that surprised.
You must log in or register to reply here.
Share:
Facebook Twitter Reddit Email Share Link
Register on MacRumors! This sidebar will go away, and you'll see fewer ads.
Sign Up
Top Bottom