ifoAppleStore shares some photos of a newly-revamped Apple product display section in an Arkansas Walmart store near the retail chain's headquarters. Coming with dedicated wood display surfaces and lighted signage, the new displays mark a distinct improvement over the previous Apple product displays that had simply been integrated into existing display shelving. 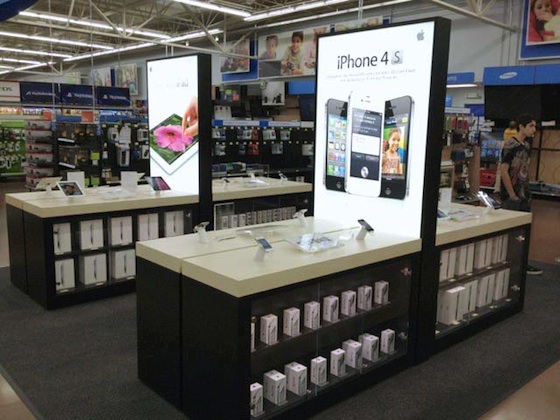 Walmart has long been a close retail partner with Apple, and the company has served as a launch-day source for a number of high-profile Apple products. The chain was even the first store to begin selling the new iPad in many locations in the United States, with a number of the company's stores offering select models of the device at 12:01 AM local time on launch day, eight hours ahead of Apple's own retail stores. 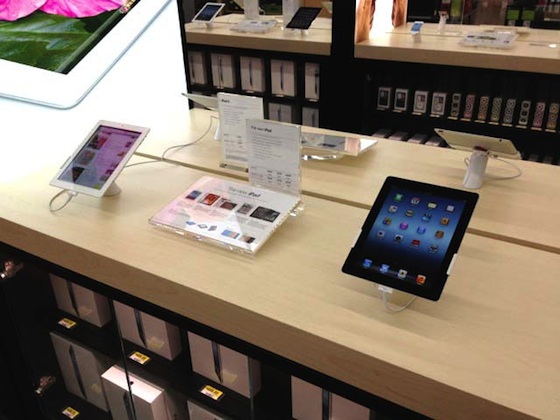 Apple has been rumored to be partnering with Walmart to bring store-within-a-store concepts to the retailer's Sam's Club warehouse stores, and it seems that the companies are also at least exploring expanding their partnership in the more plentiful Walmart locations. Apple has also committed to bring 25 dedicated Apple shops to Target stores, signifying the company's interested in expanding its presence at mass market retailers with a broader reach than its own retail store network.

Nice. It's good to see Apple expanding its retail offerings. The previous displays were definitely on the small side!

(Oh, and all the people who want to hate on Walmart - or people who shop there - get over yourselves.)

I know it's fun to make fun of Walmart, but I've been to plenty of towns where the Walmart is their only chain-product shopping option. And they sure as heck aren't getting Apple stores built next door.

So I think it's great that these people (some of whom are relatives of mine) have these options now. Too bad these displays don't come with a '1-genius genius bar.'

Cool. It looks like they only sell iOS devices though. Is this the case? I'd be curious to find out.

That looks like more display space than what my local Best Buy has. They have a small table cramped with a couple of macbooks and 2 iMacs and that's about it.
M

Now I wonder if this will be more appealing to customers who rely on wall mart for thier technology, especially apple stuff.

We've have these here for a long time now, I first saw one of this here in Spain when the new Air come out. (the one with the current design but no i5 or i7)

Flood123 said:
Cool. It looks like they only sell iOS devices though. Is this the case? I'd be curious to find out.
Click to expand...

iOS devices, iPods, and accessories for the two, I believe.
N

Apple has two products in Walmart (plus a few accessories). Can you name any other product that gets this much floor/shelf space anywhere in the entire store?

Companies fight hard to get as much shelf space as they can and get nowhere near this sq footage.

Amazing that Apple was able to pull this off.
L

Don't they know that iPhone/iPad is a "status symbol"? Or perhaps they aren't anymore? Then what is? Nexus devices?

I remember back when Jobs said product sales were harder for them because unlike Dell, HP, etc... they weren't in every Walmart store.

And now this. Nothing is wrong with it--I got my iPad from Walmart as opposed to online, but it's just not the same feeling as going to an Apple store, or even a "Store in a store" like at best buy.
L

OK, Ill take that bag of fertilizer, this bicycle pump, and umm, I guess a 17 Macbook Pro.
M

My local Walmart does have iPad 3s, but not one of the 10 iPad covers in stock was iPad 3 compatible.

GeekLawyer said:
iOS devices, iPods, and accessories for the two, I believe.
Click to expand...

Yeah that's what I was thinking too. It would be cool if it was set up like a best buy so people would have access to a wider range of apple products. If given the opportunity I am sure there are folks that would give the OSX based devices a shot. I know people can order online, but not being able to test the goods first(especially when migrating from PC) it would be hard to gage benefit of switching platforms. Here's to hoping they expand the store giving more access.

basesloaded190 said:
That looks like more display space than what my local Best Buy has. They have a small table cramped with a couple of macbooks and 2 iMacs and that's about it.
Click to expand...

At least your local Best Buy has Apple products. Mine has no Apple display/products... Except iPods, iPhones, and iPads... But I have an Apple store within a 45 minutes or so it's alright.

Wow, our Walmart is already crowded with displays as it is, wonder where they would fit it in the ones in London Ontario?
T

lilo777 said:
Don't they know that iPhone/iPad is a "status symbol"? Or perhaps they aren't anymore? Then what is? Nexus devices?
Click to expand...

I get your point, but anyone who buys a phone or a tablet simply as a status symbol is a fool.

TallGuy1970 said:
I get your point, but anyone who buys a phone or a tablet simply as a status symbol is a fool.
Click to expand...