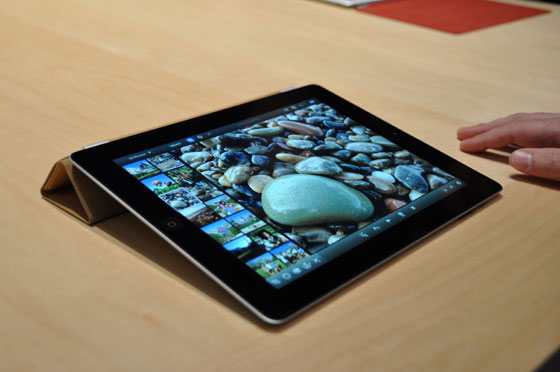 Apple told USA Today that demand for the newest iPad has been "off the charts" and that the initial batch had been sold out:

"Customer response to the new iPad has been off the charts and the quantity available for pre-order has been purchased," Apple said in a statement. "Customers can continue to order online and receive an estimated delivery date."
Click to expand...

We previously reported that U.S. pre-orders had already been pushed past its March 16th launch date as of Friday morning, with shipping estimates now having been pushed out to 2-3 weeks in all countries included in the initial batch of launches.

The 3rd Generation iPad will still be available for purchase on March 16th at Apple retail stores, presumably to long lines. The new iPad was announced last week and introduced a Retina Display, A5X Chip, LTE and 5MP Rear Camera.


Article Link: New iPad Demand is 'Off the Charts' with Initial Pre-Order Batch Sold Out

Ordered a 32GB and 64GB..not sure which one to keep yet! Wahooooo I can't wait!
Comment
I

I think there are so many people waiting for the long-talked about retina display, combined with folks that have gen 1 and 2 iPads that simply want to upgrade, that Apple will simply not be able to make these fast enough for months!

...yes, I am also waiting for my preorder, who isn't?
Comment

Dates slipped heavily here in Japan, too. Though Windows 8 looks interesting, there is nothing close to the iPad on the market right now.

At first glance there is, but then, try using one
Comment

Got my order in on the 7th, and is now out for shipping!

I'm not suprised the pre-order is sold out, considering how many ipad 2's Apple sold in the last quarter.
Comment
B

I cannot wait to hold one in person to see how the display comes out and waiting for the 4G LTE speedtest result.
Comment

Mine should be delivered Friday !

Finally something other than that ridiculous tether thing that u have to pay for.
Comment

So, if demand is off the chart, ARE they ever going to catch up? Is this part of that article the other day stating that Apple needed to expand their manufacturing base massively in order to continue to grow due to the exponential rate they have been expanding...?
Comment
M

*4G LTE is supported only on AT&T and Verizon networks in the U.S. and on Bell, Rogers, and Telus networks in Canada. Data plans sold separately. See your carrier for details.
Comment

That reminds me of those Samsung commercials.
Comment
T

Well, it is by far the best tablet. & now with iPhoto, GarageBand and iMovie, Apple have a good-priced portable (iPad) and a good-priced desktop (Mac mini).
Comment
B

another rub in for the naysayers of iPad.
Click to expand...

Samsung will have to give up and just focus on phones.

My iPad has shipped. Funny though, on the tracking Page it says my iPad is in PA right now (one state away from me).
Comment
I

Keep in mind that some of these blow out numbers may not be real. There are many out there trying to turn a quick buck by buying up new iPads and selling them on eBay or in countries that won't get the device so soon.

However, don't get me wrong, there is a lot of interest in the new iPad I am sure. Personally ordered on one on the 7th and should get mine on Friday!
Comment
A

I'm in UK and my 64Gb iPad has shipped. Ordered 3am on release day.
Comment

Waiting for tear down.... then buy stocks of component makers too
Comment
W

ios51 said:
Keep in mind that some of these blow out numbers may not be real. There are many out there trying to turn a quick buck by buying up new iPads and selling them on eBay or in countries that won't get the device so soon.

However, don't get me wrong, there is a lot of interest in the new iPad I am sure. Personally ordered on one on the 7th and should get mine on Friday!
Click to expand...

as long as the inventories are not under apple or retail shelves, its real enough
Comment

No 128GB iPad, no sale (I'm taking the wait and see approach for retina). The other day I freed up 3GB on my 32GB to bring it up to 4GB free so I could install some app updates. After installing them all, including a lot of retina crap from Apple, I had 2GB free. Even without upgrading to retina I'm going to need a bigger iPad as I lost 2GB. How do I know if 64GB will cut it? I don't even have movies or music on my iPad now and it's almost full. Games like Real Racing 2, Infinity Blade II, Rage HD, Gangstar Rio, NOVA 2 and more are all over 1GB each. Then you have apps like GarageBand and Navigon which are huge. Can you imagine the retina versions? I saw a tweet from Paul Haddad of Tapbots who said

I love my apps! I fear these universal versions are going to be the end of that. I guess I should be less of an app hoarder, but I've gone through and cleared out a bunch of stuff several times.

As for the rest of my content...I have some photos. It would be nice to be on a trip and able to dump the RAW files from my 7D. So keep 64GB for apps and 60GB for photo dump. My last trip in January I shot maybe a little over 60GB between RAW and 1080p clips with my 7D, but I could have edited that content down a bit as I only skimmed two of the three cards for bad shots before unloading, and I undoubtedly have more shots to erase from those skimmed batches.

If Adobe came out with a version of Lightroom for the iPad [new] that could edit 18MP raw images then I would probably buy one right away. But for now I'm waiting to see how things shake out with these retina apps hogging all the free space. I really hope Apple will pull an iPhone 1 and bump the storage halfway through the product cycle. Here's to hoping!
Comment
A

I'm in UK and my 64Gb iPad has shipped. Ordered 3am on release day.
Comment

I wonder if apple are constraining supply deliberately to make it even more desirable?

But then I remember the article about screen manufacturing (or lack of) the other day and think the opposite.