Nickodemus is da bomb. He lives in my hood.

Just got an email from him today about the ad.

I'm so happy for him.

A little background: My friend Pablo, from Candela Bar Puerto Rico, has been inviting me down to Puerto Rico for years to DJ & record musicians (for example: Mariposa, Inside the Dance, Bailamos en el Yunque...) Last year, he left me an answering message with the accapella of Tempo singing this line, "Se baila asi, se goza mas," to a few handclaps. I loved what little I heard & said I'd work on the song. Quantic was coming to town from the UK spinning with us in NYC & then in PR, so we decided to work on the tune together. On the plane, we linked our computers & bounced ideas back & forth. When we reached Candela Studios on Calle San Sebastien, PR, we re-recorded the vocals & added piano, bass & horns from Pablo's core group of musicians, The Candela Allstars. Quantic gave it the perfect caribbean guitar to round it off. We quickly sped up the tempo & continued to rock out with the band & made an uptempo version to the song which later became Candela Recording's first 12"
single! After selling thousands of copies on the underground Worldwide, we added it as the first tune on my "Endangered Species" re-release CD on WONDERWHEEL Recordings/ ESL Music. The tune reached more & more ears, and soon, was noticed by the people working on the latest itune/ipod ad campaign. Now, we're happy to see that our sounds will finally reach millions more people Worldwide! It's rewarding to be part of this song's growth- from printing & packaging the records at Brooklyn Phono, to spinning the record for the first time with Quantic at the Turntables on the Hudson party, to now knowing people will enjoy this tune everywhere!

These somehow never get old.

This is the most artistic one yet!

Between cats, dogs and wanderlust.

Excellent music for an excellent summertime ad. I love all the layers of color in these new iPod ads, they give the ads so much depth and appeal.

I'm curious why the two who briefly kiss aren't sharing iPod earbuds, though. Apparently Steve didn't have his hand in editing this one.

Nice find - I never get tired of these, somehow.
Y

what a cool ad! gets you really in the mood for a summertime beer

can apple come up with any bad songs for iTunes ad? everyone is so good! 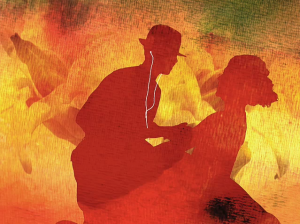 incorrect, it was not posted TONIGHT it was posted last night/this morning.
old news m8

I saw this on Heroes last night.

Time again to start the advertising campaign for the iPod. 30 days an counting to some huge events in the Apple timeline.

really cool and extremely artistic - very well done! but how about the 6G iPod?
I

This was posted so we would stop talking about Santa Rosa in the new MacBooks. err or lack thereof
I

I usually don't care about new Apple ads, but hey, i'll take this over the MacBook update.
J

one of the worse, in comparison to others......

I saw it during American Idol
D

Great ad for the beginning of the summer. Totally the right mood.

the downsides, though... I think it's kind of busy, and while it might just be because of the mellower summer mood, it's not as exciting as some of the others. It doesn't wow me, but I do like it. Now for some new ipods...
H

Watched it in HD.

I'd be chuffed to bits if an ad agency came back with that.

Won't play. They must be getting battered at the moment or something