In a new series of leaks focusing on the United States Central Intelligence Agency, code named "Vault 7," WikiLeaks has revealed 8,761 documents discovered within an isolated network in Langley, Virginia that "amounts to more than several hundred million lines of code." The code contains what WikiLeaks referred to as a "hacking arsenal" of malware, viruses, trojans, and weaponized "zero day" exploits for iOS devices, that could give anyone in possession of the code "the entire hacking capacity of the CIA."

This "Year Zero" release is the first in the full Vault 7 series by WikiLeaks, and is said to act as an introduction to the capacity and means of the CIA's covert hacking program. The agency's abilities can take aim at a number of popular consumer products from companies like Apple, Google, Samsung, and Microsoft, turning everything from an iPhone to a smart TV into a "covert microphone."

In its analysis of the released documents, WikiLeaks looked at how iPhones and iPads have been targeted by the CIA in the past, and how they can continue to be exploited in the future. Although Android remains a dominant force in the global smartphone market, WikiLeaks argued that a "disproportionate focus" has been placed on iOS devices by the CIA, most likely due to the Apple-branded phone's popularity.

Because of this, the agency has a specialized unit in place within the Mobile Development Branch that creates and executes malware to infiltrate, take control of, and exfiltrate sensitive information from iOS products. The MDB's methods are said to include a collection of zero day exploits, which are vulnerabilities in a piece of software unknown by the software's creator and subsequently exploitable by hackers.

Including the iOS malware, WikiLeaks claimed that the CIA has recently "lost control" of the majority of its hacking arsenal.

Despite iPhone's minority share (14.5%) of the global smart phone market in 2016, a specialized unit in the CIA's Mobile Development Branch produces malware to infest, control and exfiltrate data from iPhones and other Apple products running iOS, such as iPads. CIA's arsenal includes numerous local and remote "zero days" developed by CIA or obtained from GCHQ, NSA, FBI or purchased from cyber arms contractors such as Baitshop. The disproportionate focus on iOS may be explained by the popularity of the iPhone among social, political, diplomatic and business elites.
Click to expand...

WikiLeaks noted that in the wake of Edward Snowden's NSA leaks, a group of technology companies convinced the Obama administration to disclose any zero day exploits and bugs to each company, rather than hoard the information. The Vulnerabilities Equities Process underlined this agreement in 2010, and the U.S. government said it would reveal any vulnerabilities discovered to the company in question.

Documents in Year Zero paint a further negative image for the CIA, which is said to not have abided by the agreement between the technology companies and the U.S. government. An example was given by WikiLeaks centering on one malware that can control both the Android phone and iPhone software "that runs or has run presidential Twitter accounts." The government is said to not have brought the information forward to Apple or Google in the time it has had the hacking data.

As long as the CIA keeps these vulnerabilities concealed from Apple and Google (who make the phones) they will not be fixed, and the phones will remain hackable.

The same vulnerabilities exist for the population at large, including the U.S. Cabinet, Congress, top CEOs, system administrators, security officers and engineers. By hiding these security flaws from manufacturers like Apple and Google the CIA ensures that it can hack everyone at the expense of leaving everyone hackable.
Click to expand...

The scope of the new WikiLeaks documents includes detailed information on the iOS exploits, hacks that could potentially infest vehicle control systems, and even attacks against Samsung smart TV sets. This last point, dubbed "Weeping Angel," was said to have been developed by the CIA in conjunction with the United Kingdom's MI5 as a way to convert turned-off television sets into secret microphones.

The full list of the Year Zero documents can be found on WikiLeaks, and complete analysis of the documents by independent security experts will take some time in order for the impact of the release to be determined.

It's for the safety and protection of the people.

But more importantly, where are the leaks regarding aliens (the outer space kind).
Reactions: JamesPDX, Internet Enzyme, bruinsrme and 7 others

This will have huuuge impact on a lot of areas. Drain the swamp.

And blame the Russians! /rofl 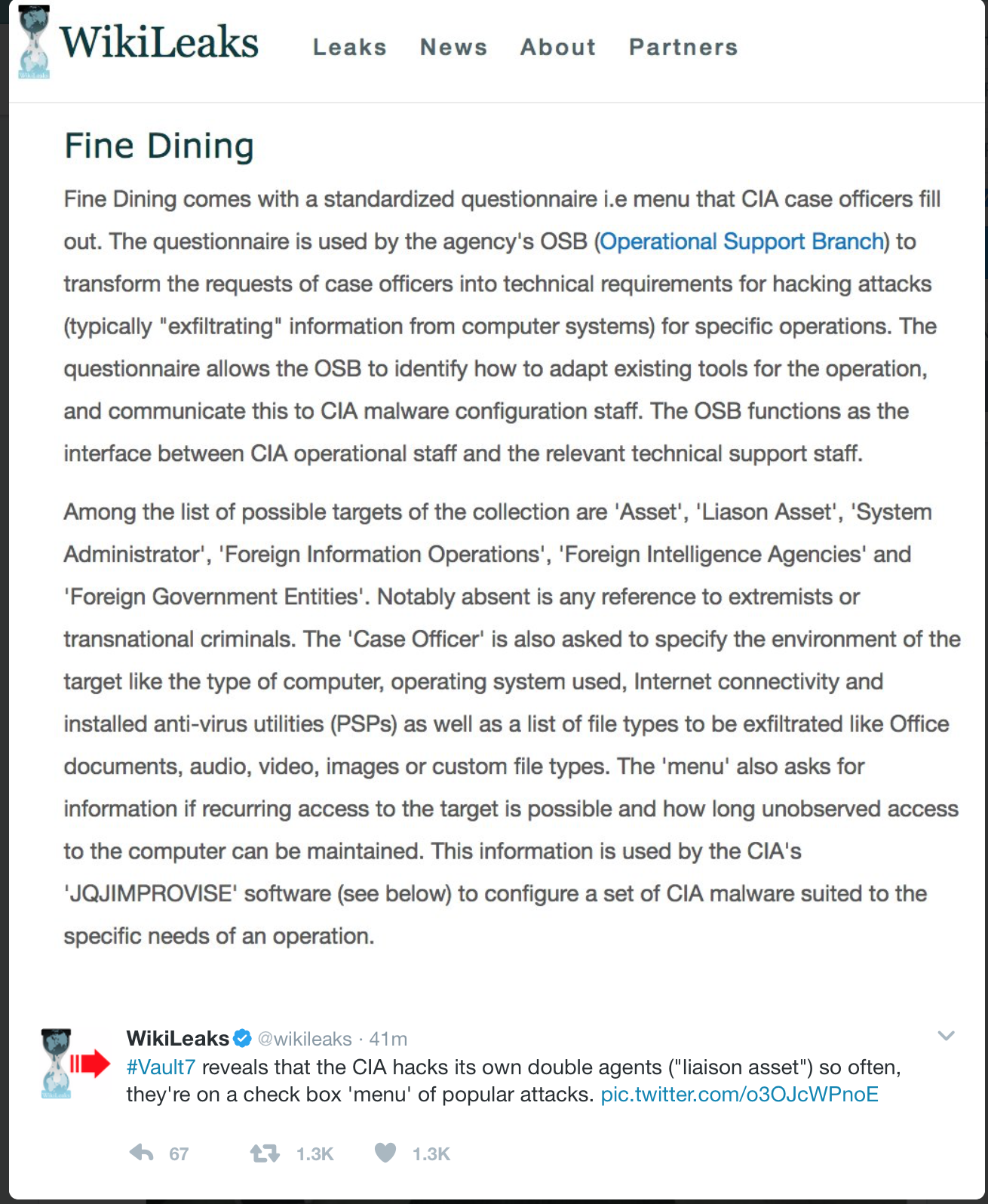 Last edited: Mar 7, 2017
Reactions: centauratlas, WWPD, Avieshek and 2 others
B

Who would have thought that the surveillance state didn't arrive as equipment forcibly installed in each person's home and workplace, but by manipulating consumer electronics that were voluntarily purchased.
Last edited: Mar 8, 2017
Reactions: tzm41, cyberlocke, brandonboo20 and 15 others

At least we know the CIA is capable of something. I thought they were just twiddling their thumbs all day.
Reactions: bruinsrme, albebaubles, Jamalien and 8 others

This is news? lol.

The government has ALWAYS tried to spy on its citizens, legally or illegally. People are just too naive and oblivious to believe such facts.

Problem with the truth, no one usually believes it and it usually hurts.
Reactions: bruinsrme, brandonboo20, MR-LIZARD and 13 others

This could be big...
Reactions: Avieshek, DrewDaHilp1, Bonte and 1 other person

yaxomoxay said:
This could be big...
Click to expand...

Orlandoech said:
This is news? lol.

The government has ALWAYS tried to spy on its citizens, legally or illegally. People are just too naive and oblivious to believe such facts.

Problem with the truth, no one usually believes it and it usually hurts.
Click to expand...

I think the news is that it's been confirmed and it's not just tinfoil hat material
Reactions: tzm41, La-d-da, MaximizedAction and 24 others

Seriously. I read it and yawned. Not from apathy regarding covert surveillance, but from faux-surprise that this info would be new to anyone. Are there actually people who didn't think this was occurring?
Reactions: MR-LIZARD, centauratlas, timeconsumer and 7 others

Cool job to have!
Too bad you cannot brag about it.
Reactions: alex00100 and yaxomoxay

69Mustang said:
Seriously. I read it and yawned. Not from apathy regarding covert surveillance, but from faux-surprise that this info would be new to anyone. Are there actually people who didn't think this was occurring?
Click to expand...

I find Wikileaks timing of this all too convenient. They've released this to take the heat off of the Russian investigations.

Its just a another diversion for Trump.
Reactions: aKansasKid, wolfaaron, Jax44 and 6 others

note to self: If I am ever important, only have conversations is a hole I dug.
Reactions: Cartoonkid and Goatllama

* George Orwell gives a shoutout from the grave.
Reactions: tzm41, JamesPDX, canadianreader and 9 others

And you can bet every other nation on earth with technology has the same, is developing the same, or is doing more.
Reactions: supertomtom, wolfaaron and mattopotamus

Oh, so now Wikileaks is a good source again? All that stuff leading up to the election was just alt-right craziness. Ok.

(No, I didn't vote for Trump and don't trust him.)
Reactions: KPOM, centauratlas and cmichaelb
K

And yet people are saying Trump must be lying when he says he was wiretapped.
Reactions: celtic411, La-d-da, ksnell and 18 others

KPOM said:
And yet people are saying Trump must be lying when he says he was wiretapped.
Click to expand...

Trump's mistake is in believing that he was specifically targeted. We're all wiretapped.
Reactions: Jamalien, Glassed Silver, ILikeAllOS and 13 others

wonder how much this will affect apple/samsung sales?
Reactions: dk001

I believe that agreement to release zero day exploits had some major caveats in it that basically allowed intelligence agencies to pick and choose which they felt were vital to their operations vs which they felt they could turn over. Not that I'm a fan of that at all but I don't believe they violated their own agreement as such.
G

And this is why any time someone starts talking about a huge, far-reaching conspiracy, I kinda have to laugh. I don't think we have a single large organization on earth that's tight enough to hide anything big. Even the freaking intelligence community is subject to major leaks of this nature at least once a year.
Reactions: manu chao