Parallels Desktop 6 for Mac to Debut on September 14th 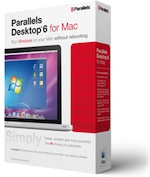 Parallels Desktop 6 for Mac will carry a suggested retail price of $79.99, with a student edition available for $39.99. A "Switch to Mac" edition that offers additional tools to assist PC users making the move to the Mac platform will be available for $99.99. Existing Parallels Desktop for Mac users can take advantage of upgrade pricing of $49.99, and those who purchased Parallels Desktop 5 for Mac on or after August 15th can receive the new version free of charge.

$49.99 upgrade price tag?? Seems a bit steep. I am going to wait for some reviews/benchmark test to surface before I buy.
Comment

ATLChris said:
$49.99 upgrade price tag?? Seems a bit steep. I am going to wait for some reviews/benchmark test to surface before I buy.
Click to expand...

There really should be a 4mth window for recent purchases of Desktop 5 to free upgrade to Desktop 6.

personally I'm sticking to VMWare Fusion 3.1; and will upgrade to 4.o in the future. I NEED proper USB support which will become evident with USB3.0 devices starting to launch like LaCie, WD, etc.
Comment
H

Phew! I am getting a free upgrade because I bought it two weeks ago!!! Yeepee!
Comment
T

Parallels 5 is quite fast already and very stable. Not sure I see a reason to upgrade whats working fine right now.
Comment
J


ATLChris said:
$49.99 upgrade price tag?? Seems a bit steep. I am going to wait for some reviews/benchmark test to surface before I buy.
Click to expand...

You should try being a user from v2 like me.
Punished for my loyalty. The price I have paid for upgrades alone runs into hundreds of dollars which is just ridiculous.

Why not a sensible fee like $19.99 for existing users?

Most of us got screwed by purchasing 4 and not getting a free upgrade to 5 which had all the features 4 was supposed to have.
Now they want another 40 bucks , Im going back to Fusion. Screw them.
Comment
D

Parellels upgrades are the exact reason why I prefer VMWare Fusion. Every year they want another $50 upgrade fee.
Comment
C

Am I the only one who thinks Parallels' release cycles are too short? Less than a year between paid upgrades for an $80 product seems excessive.
Comment
T

I was about to upgrade for the $49 fee (I was one who bought the 4.0 version -- two licenses actually as it was 2-for-1) then I saw the Nova thing. Are they legit? The web citizenry seems divided.

If Microsoft would just release Visio and Project for Mac then I could avoid this silliness.
Comment
M

I understand needing to generate additional revenue to continue development, but their cycles are definitely way too short.

Given that, you can probably do better:

At a minimum you can save $10 off the upgrade price. At best, you're upgrading for "free".
Comment
O

I have both parallels and VMware.
Problem is, one updates and it goes all faster then the other does and is even better.......
which one do you go for? It seems that it is just a matter of personal preferences, but I don't know enough about them to actually say.

I guess I will upgrade to version 6 and see what happens....
Comment

Why do they keep focusing on graphics performance when compatibility is the biggest problem? Loads of games don't run or don't run properly because shader support is crap or other features just don't work as expected.

I would expect a 3.0 version to be largely perfect and doing nothing but improving performance, yet 3 versions later they're still doing it backwards! Hell, WINE will run far more games than VMWare and Parallels combined, at least in my experience.
Comment

Downloading mine now! I'm a big fan of Parallels, and I'm very happy that they have been consistent in major upgrades over the years. Just wish I had a new i7 MBP to go with the new upgrade.
Comment

I'll wait for a full retail version of Parallels 6 deal that hits $20-30 after rebate. (It will happen - it always does.)

And they have kept that horrible, horrible non-replaceable icon. I love Parallels but that icon gotta go. It makes my Dock ugly.
Comment
Z

YES! I took the advice of 9to5mac and ordered a few days ago when amazon had it discounted to $39.99 ($20 rebate inside the box) - it's being delivered today (Free Shipping, too). Great deal to get the latest version for only $20... Though I already had Parallels 5 installed on my Mac. I've never heard of the "Student Edition" before, what features are excluded from that version to make it less expensive?

Final question -
How do I upgrade to the new version when it's released? Just download the update or what?
Comment
L

I used to use Parallels, but stability and upgrades have pushed me back to VMWare. (I've tried VirtualBox for a while as well)
Comment

Personally, I still have copies of Parallels 4 and 5 that I got in app bundle promotions that I haven't installed because I haven't found the need yet but have heard good things about both Parallels and VMWare.
Comment
M

They always hope to get about 40 bucks as annual fee. I seek to change.
Comment

Lailoken said:
I used to use Parallels, but stability and upgrades have pushed me back to VMWare. (I've tried VirtualBox for a while as well)
Click to expand...

Sounds about the same as me, you might want to try WINE, it's not nearly as user friendly, but the compatibility is extremely good, better even than VMWare or Parallels a lot of the time, and it cuts out all the overhead of virtualisation so it's faster 9 times out of 10 as well. Just grab MacPorts and install with that, or WineSkin which is actually easier a lot of the time.
Comment
You must log in or register to reply here.
Share:
Facebook Twitter Reddit Email Share Link
Register on MacRumors! This sidebar will go away, and you'll see fewer ads.
Sign Up
Top Bottom