Photos of iPhone 4S/5 Logic Board Suggest A5 Processor

A site by the name of AppleLeaks today posted photos of what is claimed to be the logic board from a next-generation iPhone model. The report is unsure about whether the board is from an upgraded iPhone 5 model or a cheaper "iPhone 4S" model Apple is also said to be planning to launch, but the images do add more detail to the picture</a> that is beginning to come together. 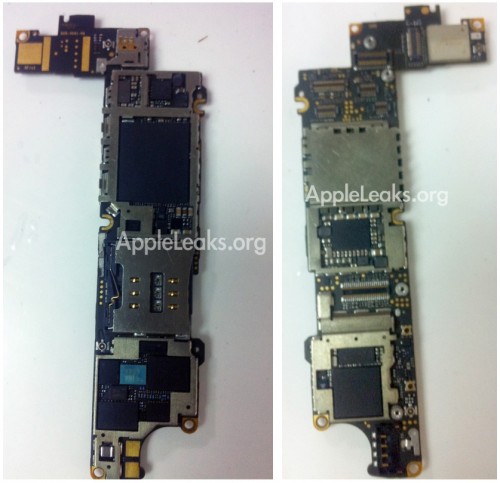 Comparing the pictures to the ones of the logic boards for the CDMA and GSM iPhone 4 models as seen in teardowns by iFixit (see steps 13 and 14), it is interesting to note that this new logic board carries a form factor more similar to that of the CDMA iPhone 4 but with a SIM-card slot also squeezed onto the board. That inclusion of the SIM-card slot on the new logic board has resulted in a reshuffling of the chip locations on the front of the board, while the back side remains quite similar to the CDMA iPhone 4 logic board. 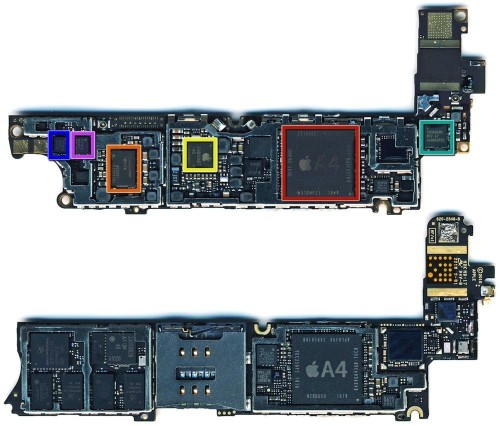 Front of CDMA (top) and GSM (bottom) iPhone 4 logic boards (Source: iFixit)​
Notably, the relatively large area on the front of the logic board designed to house the main processor for the device is rectangular in nature on the new board, suggesting that it is designed for the rectangular A5 system-on-a-chip found in the iPad 2 rather than the square A4 chip found in the iPhone 4 and original iPad. Apple is of course expected to use the A5 in the iPhone 5, but there has been some question as to whether Apple would step up to the A5 for its cheaper iPhone 4S model or continue to use the A4 in order to hold costs down.

The iPhone 5 is expected to be a "world-mode" phone capable of running on both GSM and CDMA networks. The presence of a SIM-card slot on the new logic board does indeed confirm GSM compatibility for this device, whether it be an iPhone 5 or 4S, and CDMA compatibility would come from the inclusion of a specific chip supporting the dual standards. Such a chip from Qualcomm is already used on the CDMA iPhone 4, but accommodation for a similar chip on this new logic board can not be confirmed given that the board is unlabeled.

AppleLeaks also posts of the battery for the iPhone4S/5, in line with photos from other sources seen several times earlier this week.

I posted these pics on MR first.

Aren't most vibrators kind of circular?

While I planned to skip this revision since I think my i4 works great (minus very minor cosmetic issues due to me), if there is a bigger screen, then I'll reconsider.

I believe the word is "cylindrical."

If it is on Sprint I will switch, as long as they don't decide to make a new iPhone specific plan and charge $20 to tether.

Would still sound weird to me when they would release and make a phone called iPhone 4S and make marketing with iOS 5 software and an A5 chip in it. Still everybody knew the A5 would be in there.

The leaky cauldron has melted. Someone's in for a good cookin'.

Time marches on, new and updated components are used, are we really any better off than before the iPhone came out?

if this is the 4S, then id expect a different form factor to the 5.

However, part of me is thinking could this be the iPhone 5?

I cant wait until we see the front of the device (the only important part missing now!)
T

I feel sorry for your missus.

These photos are in line with earlier rumors that the next iPhone would share a common board for both GSM and CDMA versions.

Sorry to be off topic, but two days after Jobs resigns as CEO, AAPL is kicking butt (passing XOM to become most valuable company)!

Seems as though the spec rumors are right on.... I'm hoping for the 4s and 5 split. I think the iPhone 3 needs to be put out to pasture. It's a good phone, but the processor makes it dated.

Naimfan said:
Time marches on, new and updated components are used, are we really any better off than before the iPhone came out?
Click to expand...

Simply consider this. That tiny circuit board you see, that is half as wide as a phone, as long as a phone, almost, and under 1/3 the thickness of a phone, is an entire Macintosh computer running a full featured OS. Compare that to the Mac Plus board and device size and later the Cube sizes.

The A5 is probably not quite double the compute capacity as the A4, which itself was no slouch. Not as fast as a Core 2 Duo, but faster than most of the PowerPC chips used in Macs IIRC.

I suspect A6 or A7 will have compute capacity to be a desktop capable experience, whether or not that is the route they will ever go.

DrJohnnyN said:
Sorry to be off topic, but two days after Jobs resigns as CEO, AAPL is kicking butt (passing XOM to become most valuable company)!
Click to expand...

Side note to your side note.... I sold all my Apple stock at $160 to buy into a solar stock that was suppose to double but did nothing but sink and just got delisted the other day. Now I have almost nothing whereas if I would have went the other way I would have been very, very happy. Very bad call on my part.

shardey said:
anyone else faintly seeing "a4" on the new chip?
Click to expand...

Of course because these two pictures compare iPhone 4 GSM and CDMA which both have an A4 chip. The new parts are not labeled and are on the top of the article. Read: It clearly states that the chip is rectangular (A5) vs. square (A4).

This could be a redesigned iPhone 4 board to use in the production of a lower cost presumably 8gb version, to sell alongside the next released iPhone. As they did with the 3GS. They could be trying to cut down on production costs, instead of producing 2 different boards for both AT&T and Verizon which could run up of manufacturing costs, they could consolidate the boards and offer it at a lower price point of one dual band unified device. Which they would offer for 100$ or many even 49$. Just my two sense

I hope this A5 has 1GB of ram, my iphone 4 is starting to feel slow.
P