Safari users are today reporting an odd issue causing Apple's web browser app to crash on both Macs and iOS devices. Several Mac users are also not receiving autocomplete suggestions when entering text into Safari's address bar, with many pages including sites like Google failing to load completely. For many iPhone and iPad users, simply tapping on the URL bar causes Safari to crash.

URL searches, autocomplete, Top Sites and other Safari features rely on queries being sent to and returned by Apple's servers, suggesting this is where the problem lies. The issue also seems to depend on what data the browser most recently cached.

The current fix for iOS and Mac involves disabling Safari Suggestions, which stops the app from crashing to the home screen. On your iOS device, go into Settings, tap Safari, and toggle off the "Safari Suggestions" switch. On your Mac, the same setting is found in Safari -> Preferences -> Search. 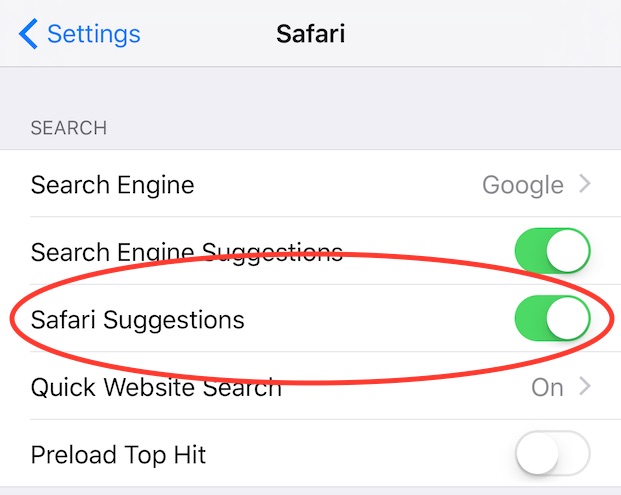 The problem appears to be affecting users around the world and will likely be resolved when Apple corrects the service on their end.

Update: According to BuzzFeed, Apple has now fixed the issue that was causing the Safari browser to crash on iOS and Macs due to issues with Safari Suggestions.

How did this bypass their QA department?
Reactions: brentonbrenton, JohnnyW2K1, DonRivella and 1 other person
M

......I thought my iMac got a virus or something. It's been not working for a few hours already. Search bar non responsive and typing did not even appear on search bar.

This was driving me nuts all day - I hadn't realised I had performed an update - and if not, then how does this happen?

Yes this is true. I can only use Safari on my mac by using New Private Window option. Oddly, if I open the regular Safari window, I get only the apple.com address, twice, see the attached photo... I cannot input anything into the normal Safari browser. Chrome and Firefox are working though. Clearly a Safari only problem.

It just works...
Reactions: Demo Kit, rjohnstone, RickInHouston and 4 others

I wonder if this is actually a problem with Google search autocomplete because I'm not experiencing the problem and I use duckduckgo which has its own autocomplete. Obviously still a bug in Safari but perhaps triggered by Google.
Reactions: br7fox, Gigaman, 27 others and 7 others

Didn't know there was an issue! All devices are working fine on my end, even with safari suggestion on.

But it's good to have a workaround just in case, hope they fix soon.
Last edited: Jan 27, 2016
Reactions: Mlrollin91, AlexH and AppleFan78
A

After doing this, Safari will be snappier. At last.
Reactions: frenetic

I suspect another beta update will be out soon... until then it's back to Firefox.
Reactions: v3nt and iWillNotUpgrade

Check your Siri usage in battery stats. Mine has gone through the roofs...
R

craig1410 said:
I wonder if this is actually a problem with Google search autocomplete because I'm not experiencing the problem and I use duckduckgo which has its own autocomplete. Obviously still a bug in Safari but perhaps triggered by Google.
Click to expand...

Using DuckDuckGo too, Safari works fine on all my devices
Reactions: Gigaman, ZZ9pluralZalpha, Moccasin and 2 others

Didn't have a problem at all until I saw it on Sky News tried it and I had the same problem, clicked on the URL app crashed.

Done it 5 out of 20 times, I also started to hold down on the URL which the brings up the paste and search option, to which I clicked on the URL box and it seemed to work for me.

My mac crashed a few weeks ago, but it was before the latest update.

It's been fine since then.
T

I spoke to Apple support this morning, as i thought i had an issue with my Mac
The simple advise was to go and turn off "Include Search Engine Suggestions" within Safari preferences.

The adviser told me to give it 12 hours and try switching it on again.

Good to know! I first experienced the issue today and automatically wondered if Apple was trying ways to 'suggest' users to upgrade to iOS 9.2.1.
Reactions: mw360

Seeing this problem as well. It was driving me a little nuts on my iPad. Had to switch to iCab to get here to find out what the problem was...
P

I have google as the search provider Safari on all of my devices. Can't replicate the issue on several Macs or iOS devices. Strange, I wonder what the cause of it is and how it's only affecting some devices.
Reactions: AbSoluTc and orbital~debris

This has been driving me nuts all morning!!!

ecallaghan said:
This was driving me nuts all day - I hadn't realised I had performed an update - and if not, then how does this happen?
Click to expand...

I went through the same procedures and I was about to do a clean install when I decided to check the forum! Thank god I did
Reactions: dai.hop, Schubbiii and orbital~debris
You must log in or register to reply here.
Share:
Facebook Twitter Reddit Email Share Link
Register on MacRumors! This sidebar will go away, and you'll see fewer ads.
Sign Up
Top Bottom