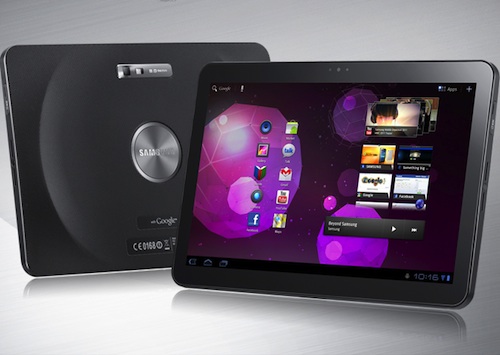 South Korea's Yonhap News Agency reports (via AsiaPulse) that Apple's iPad 2 introduction has forced Samsung to reconsider its plans for its forthcoming Galaxy Tab 10.1, a larger version of its initial 7-inch Galaxy Tab that is intended to offer a more similar form factor to the iPad. According to a Samsung executive, the company is looking to improve the specs of the device to be more competitive with the iPad 2.

Lee Don-joo, executive vice president of Samsung's mobile division, said that Apple has presented new challenges for the South Korean company with a thinner mobile gadget that is priced the same as its predecessor.

"We will have to improve the parts that are inadequate," Lee told Yonhap News Agency. "Apple made it very thin."
Click to expand...

But technical specs are not the only issue facing Samsung with the Galaxy Tab 10.1, as the company also must address pricing issues that currently will make it difficult for the device to compete against the iPad 2.

The 7-inch Galaxy Tab was priced at nearly US$900 without a two-year contract from mobile operators, while the price of the iPad 2 starts at $499, with the most expensive model costing $829. Samsung did not announce the pricing details for the 10.1-inch tablet.

"The 10-inch (tablet) was to be priced higher than the 7-inch (tablet) but we will have to think that over," Lee added.
Click to expand...

Apple made a number of references to the tablet competition during its iPad 2 introduction earlier this week, making a point to illustrate Apple's hardware and software head start and pricing advantages over competitors' offerings. Apple's iPad 2 comes to market even as some competitors have yet to begin shipping their first round of tablet devices announced in some cases many months ago.

Wow, that product image looks like real crap! Reminds me of all the "iPod killers" that came out in the early 2000's.
Comment

How is the Galaxy Tab on version 10.1 already?
Comment

Strange because if they priced it same as the xoom it is a much better tablet than the ipad2.
The 10.1 is also the screen size.
Comment
C

Nice to see Apple being seen as competitive. I wonder what parts in the Galaxy Tab were considered "inadequate". Hopefully, Samsung will put out a tablet that would make Apple want to make the iPad better. Nothing like a little friendly competition to make the products better. While I'd like the iPad a bit cheaper, I'd much rather see the companies make better products at about the same price than make $200 tablets that are ******.

roadbloc said:
How is the Galaxy Tab on version 10.1 already?
Click to expand...

As someone said, the 10.1 refers to the screen size, not the version of the software.
Comment

Wow, Steve must feel very good about the iPad. Do you remember those post from last year about people complaining how bad the iPad is? It's so funny to read these comments again.


Mr Gadget said:
Just an oversized Ipod Touch. This will not sell well no need for this device.
Click to expand...

Researcher said:
The Mac Tablet that years we were waiting for, is a giant iPod. Thanks Apple, Crap!
Click to expand...

cenetti said:
Idisappointment ..... Bigger fail than macbook air and apple tv combined... all those years of waiting and all the hype.
Click to expand...

ManChinKo said:
That is a typical Microsoft let's-leverage-our-Office-device. Where is the WOW factor? Is this your MOST important device you have ever involved?
Click to expand...

neverbuyapc said:
I'm sorry but its a sweet product with no market. Not great for business, developers, or games.
Click to expand...

MacBoobsPro said:
This is probably the first Apple product (since the MacMini) that I think wont do as well as they hoped. It wont be bad but not great. Theres just no real 'killer' app.
Click to expand...

neverbuyapc said:
ARE THERE SERIOUSLY NO USB PORTS!?!?!? This went from "best product of all time by a longshot" to "epic failure!"
Click to expand...

fletch33 said:
i have no need for a giant iPhone. the slim netbooks running OS X with 9 hours battery life will eat this thing for breakfast at a price of only $299.

first time i have been this sad about an Apple release.
Click to expand...

lol wow sounds like Samsung was really caught off guard by Apple - but did they really think Apple was going to up the price by 50%?
Comment
M

With its remarkable thinness, excellent specs (for what the consumer not a spec whore needs), integrated OS, advanced ecosystem, retail stores, and aggressive pricing likely due to cornering the market on components, it seems to me that Steve had a long range plan when it comes to the iPad. All of the pieces needed to be in place until…boom.

I don’t see him being a man who forgives past mistakes, and I’m sure he was determined not to repeat losing the desktop wars.
Comment

I'm sure these guys aren't the only ones who are going back to the drawing board.

You would think that Apple's competitors would be better at predicting what Apple's products are going to be by now.

It's not a bad unit but they have to make it more accessible by dropping the price. How in the world can anyone expect to sell anything priced higher then an apple product. Same price of an ipad or $100 less. I can see it now XOOM... ZUNE... XOOM... gone & next will be the Galaxy
Comment
D

Unless this thing undercuts iPad's price, I will not even take a look at it. iPad is not just successful because it's cheap. Apple has app store and apple store to help consumers to distribute their apps very quickly and teach customers how to use the damn thing.

Does samsung offer this kind of service? No. Get out.
Comment
M

They gonna call this the Apple killer again? That term is a cliche now... Has not happened yet since being used on the iPhone 1.

So much goes into developing the OS, a good framework for applications to be developed that considers so many facets that are important for success, distribution of those apps and, most importantly, to connect them all into one user experience that excels in the most important areas for most of its users.

So much can be argued over the fact it doesn't have a USB port or something else specific. For Apple and the iPad, the formula is right and works for the type of product they want to develop and what many people want.

They gladly leave it to others to handle the USB port.
Comment

Not that attractive.
Maybe it should come in white.
Comment
M

FFArchitect said:
So much can be argued over the fact it doesn't have a USB port or something else specific...they gladly leave it to others to handle the USB port.
Click to expand...

And isnt the matter of having a USB port just a matter of software? The dock connector to USB camera accessory shows that its possible without any hardware changes.
Comment
N

SBlue1 said:
Wow, Steve must feel very good about the iPad. Do you remember those post from last year about people complaining how bad the iPad is? It's so funny to read these comments again.
Click to expand...

Totally agree with u after reading ur post.... seems so funny... wondering how they reacted after seeing iPad being such a huge success....
Comment

Just like all the manufacturers, "went back to the drawing boards" after the iPad1 was released.

Microsoft's road map is to deliver "something" by the end of 2012.

And if "rethinking" is more specs, feeds and "engineering", those manufacturers STILL don't have a clue.

KAPOW! Right between the legs

Really??? LOL I'm glad your back at the drawing table again, maybe they should just sell DIY kits that start at $99 at least the geeks will have fun with that

If apple sold a 7" tablet it would start at $299 at least lol.....Samsung needs to just focus on their strengths and improve upon them... Tablets or computers in general are a weak point for the company.
Comment
M

masta beta said:
They gonna call this the Apple killer again? That term is a cliche now... Has not happened yet since being used on the iPhone 1.

The only thing they kill is themself... haha...
Comment
D

pkson said:
Samsung, as usual, is being overwhelmingly stupid.
Click to expand...

I mean this 'statement' ?? doesn't even have any positive spin at all... It's as if they took one look at the new version of the Apple iPad, **** their pants (can a company do that?) and said... Ummmm could you please excuse us for a moment... as they slowly shimmy out the room.... backwards!
Comment
You must log in or register to reply here.
Share:
Facebook Twitter Reddit Email Share Link
Register on MacRumors! This sidebar will go away, and you'll see fewer ads.
Sign Up
Top Bottom