Samsung is set to hold its first "Unpacked" event of the year on Wednesday, February 9, and the South Korean company is expected to unveil new flagship smartphones that will compete with Apple's iPhone 13 and iPhone 13 Pro models released in September. 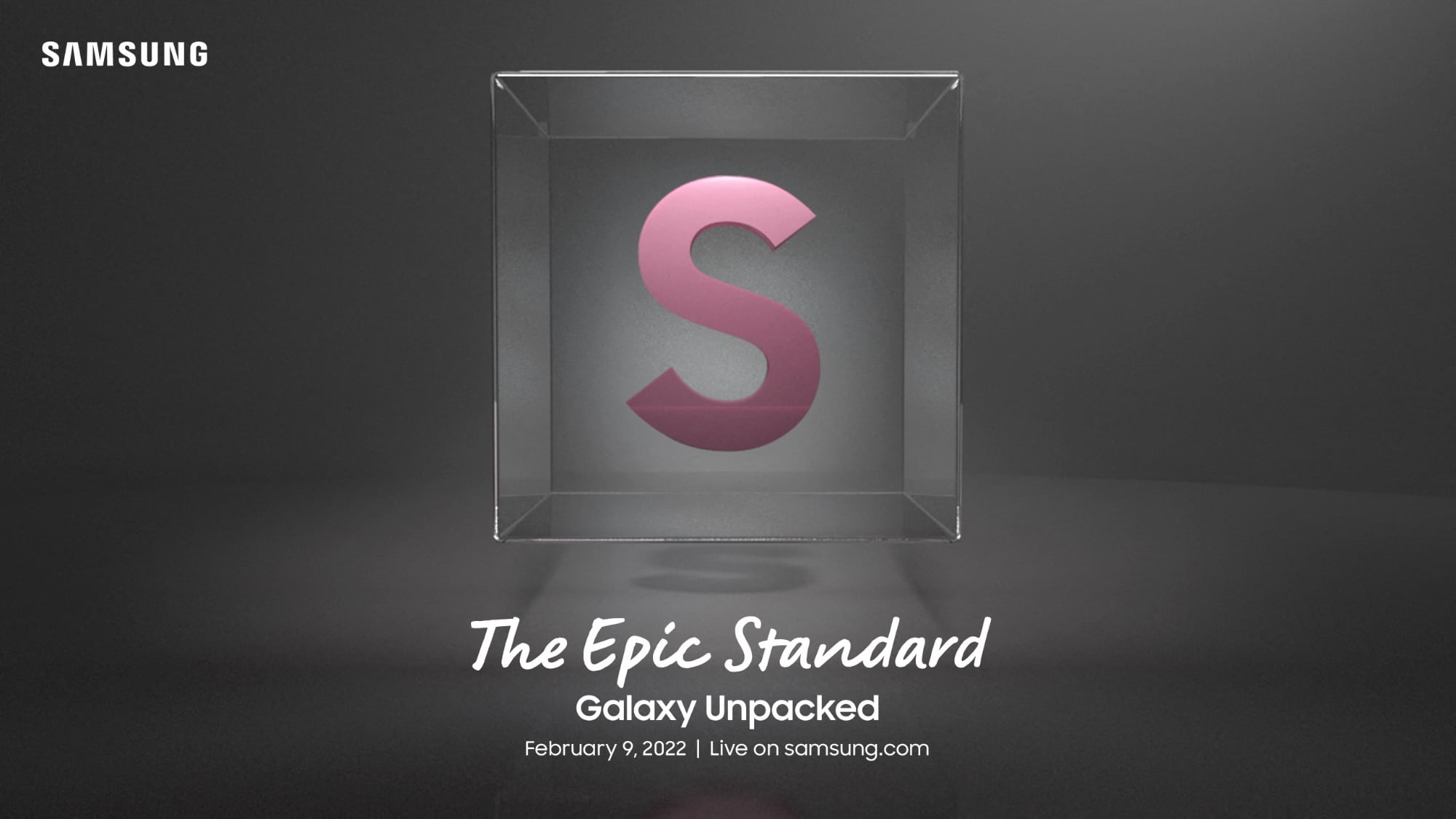 "Join us as we break the rules to set the epic standard," reads Samsung's tweet about the event. An included graphic references the S22, which is the next-generation device that we're likely to see launch. Samsung's YouTube video also mentions breaking "through the night," suggesting camera improvements.

Multiple leaks, rumors, and mockups have provided insight into what we can expect from Samsung's newest smartphones. The two smaller smartphones will feature rounded corners and triple-lens cameras, and the high-end flagship will have a boxier design similar to the Galaxy Note, a built-in S-Pen holder, and a four-lens camera setup. 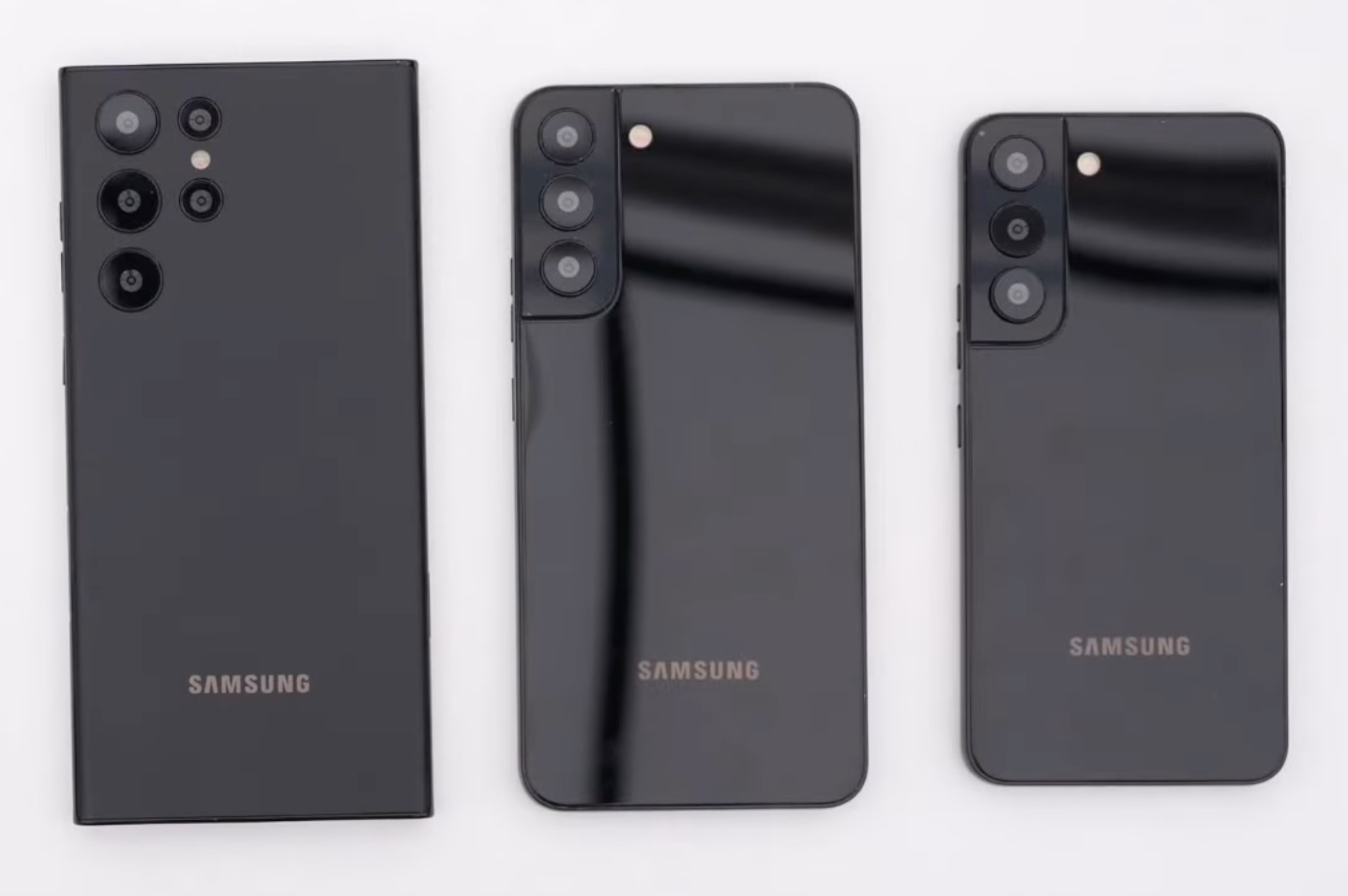 From right to left: Samsung Galaxy S22, S22 Plus, and S22 Ultra (credit: Unbox Therapy)​
Samsung's updates are expected to be fairly modest, but the two more affordable smartphones will offer updated 50-megapixel main cameras plus ultra wide and telephoto lenses. We are expecting Apple to add 48-megapixel cameras to the iPhone 14 Pro models, but as of right now, Apple's iPhone 13 camera lenses are 12 megapixels.

The Galaxy S22 Ultra could have a 108-megapixel main camera with a Super Clear lens for reduced glare and reflections, plus an ultra wide lens, a telephoto lens, and a periscope lens for zoomed in shots. Apple is working on periscope lens technology, but rumors suggest a periscope lens won't come to the iPhone until 2023.

Hole-punch camera designs are expected for the front display of the S22 lineup, as are new body colors and performance improvements. We'll learn more about how Samsung's new flagship smartphones compare to Apple's iPhone 13 devices when February 9 rolls around.

The 6.8 S22 Ultra appears uncomfortable to hold with the square edges and just overall looks unwieldy.

There’s a point we’re reaching with smart phones are just getting too big, and then add a case to bolster the thickness and weight? I just don’t care for the ‘Phablet’ era of smart phones.
Reactions: DeepIn2U, astorre, valleian and 1 other person

Will these still have plastic backsides?
Reactions: msp3

Really curious to know which new colors will be introduced this year. Competition is a good thing.
Reactions: aloshka, _Spinn_, svish and 5 others

its probably going to look like the iPhone...
Reactions: pilotpat, _karrol, bobob and 3 others
A

Really exited to see their new cameras. And despite popular opinion here, I really like that hole punch they do in the front. Maybe they can make it more useful with proper facial recognition though.
Reactions: TheSapient and GuruZac
S

Remember, without Samsung chasing, there is no Apple innovating. You should all root for great stuff to come from Samsung.
Reactions: Hammerd, sinsin07, rezzo and 34 others
J

What about a notch?
As for the cameras, whatever they bring out now we’ll probably see in iPhone 14…
Reactions: decypher44 and TheYayAreaLiving 🎗
J

syklee26 said:
Remember, without Samsung chasing, there is no Apple innovating. You should all root for great stuff to come from Samsung.
Click to expand...

True, but iPhone 14 features are frozen for a while, so either Apple already has competitive plans or we won’t see til 2023.
Reactions: TheYayAreaLiving 🎗

The Galaxy line looks remotely nothing like an iPhone….
Reactions: jasvncnt, Hammerd, nordique and 14 others
J

There’s a point we’re reaching with smart phones are just getting too big, and then add a case to bolster the thickness and weight? I just don’t care for the ‘Phablet’ era of smart phones.
Click to expand...

I agree, don’t like the non-rounded corners, as I am typing on my 13ProMax with my pinkie right on the rounded corner.
I think this is the max size for a phone…
Reactions: TheYayAreaLiving 🎗

Well, at least I know what day to schedule for cutting and refilling the Firewood Bins. ?
Reactions: Lemon Mac and valleian

When your development schedule is so bad, you force MacRumors to become SamsungRumors…
Reactions: BeefCake 15
W

winxmac said:
The Ultra reminds me of Sony Xperia phones...
Click to expand...

Credit to Samsung on the S21 Ultra. It's still a really good phone hardware wise. I imagine the S22 will be a more modest upgrade although Samsung seems to push the envelope every year.
Reactions: System603

Hmm.. just here for entertainment from the iCrowd, w/tequila and chips/salsa..
Reactions: DeepIn2U, Slow Programmer, chad.petree and 1 other person

syklee26 said:
Remember, without Samsung chasing, there is no Apple innovating. You should all root for great stuff to come from Samsung.
Click to expand...

Android no thanks; and wonder what Samsung will laugh at this time about apple then copy it them selfs
Reactions: WWPD, valleian, carbon_0 and 1 other person

Can't wait to see what the S22 Ultra holds. Looking to upgrade to that.
Reactions: GuruZac and rhinosrcool

“108-megapixel main camera” on a smartphone? Seriously? The file sizes would be insane and a picture in a dark area would be all noise. Yes, I know about pixel binning, even so, let’s not go down this rabbit hole. Give me larger pixels, not more!
Reactions: M3gatron, valleian, TheYayAreaLiving 🎗 and 1 other person

Samsung all about that high numbers like 10262 mb camera and 64k video lol they honestly can’t do anything right it’s all half baked
Reactions: FriendlyMackle, pilotpat, WWPD and 6 others

Honestly, even iphones, smartphones are such a mature product at this point it's hard to get excited about any announcements about them now days. More mega pixels slight processor improvements. Yawn.
Reactions: _karrol, travelsheep and psxp
You must log in or register to reply here.
Share:
Facebook Twitter Reddit Email Share Link
Register on MacRumors! This sidebar will go away, and you'll see fewer ads.
Sign Up
Top Bottom