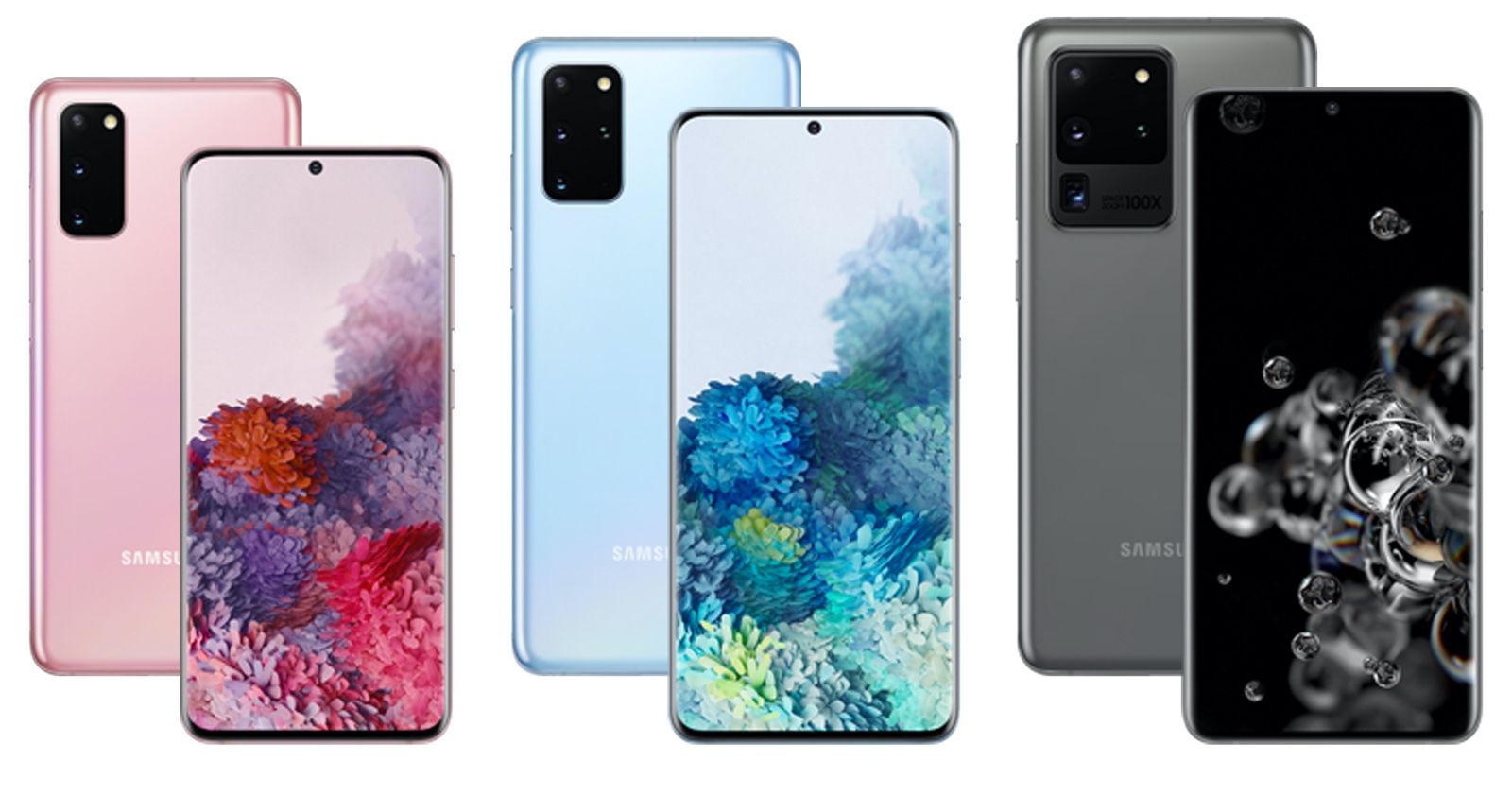 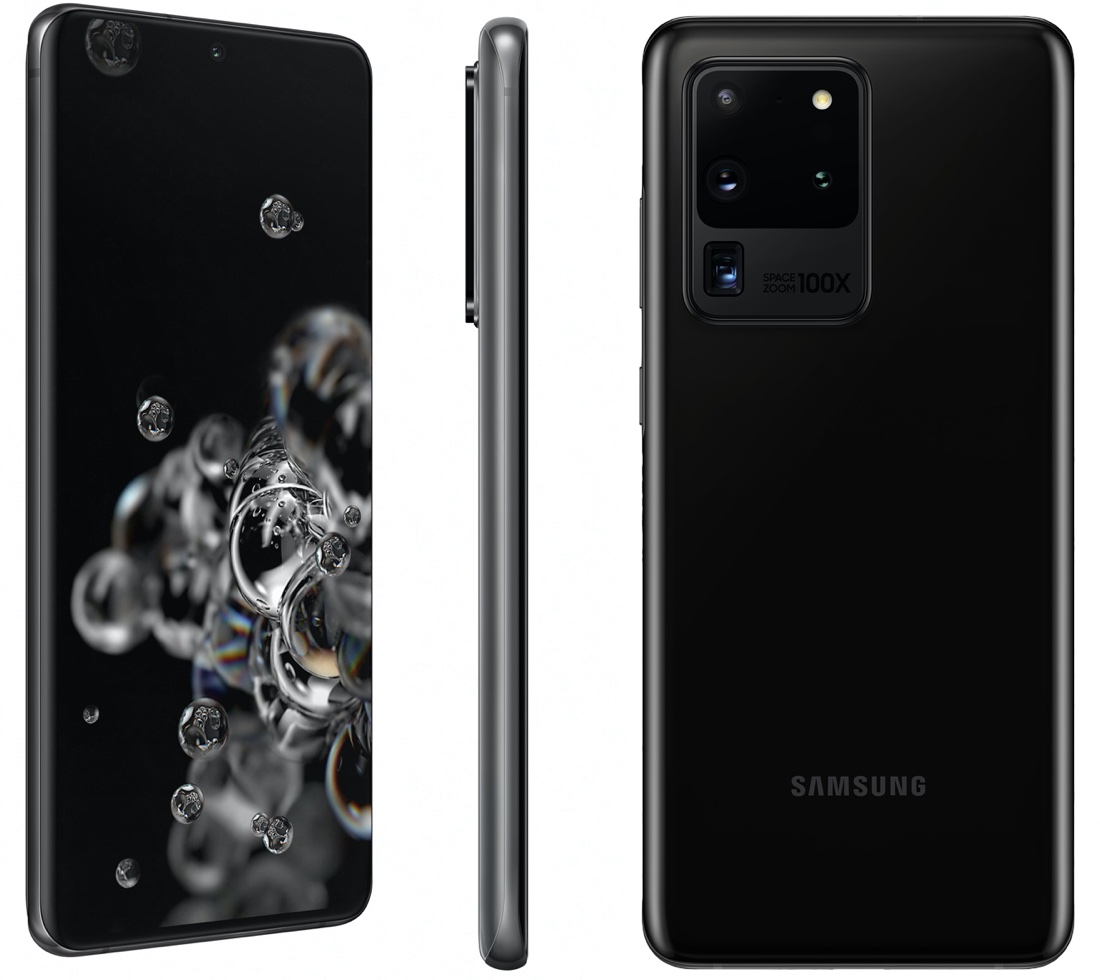 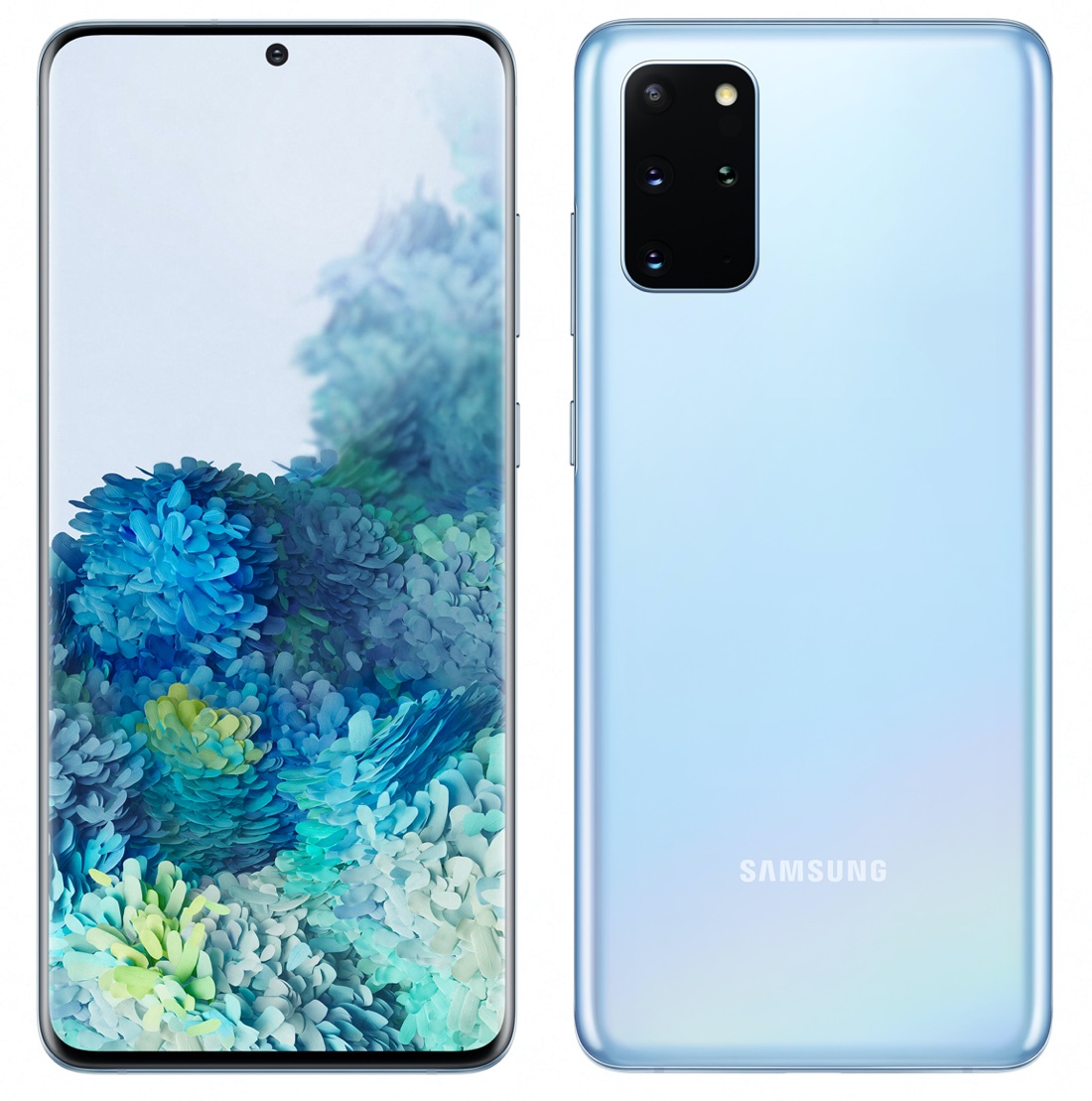 Samsung says all of the cameras in the new smartphones are able to let in more light for better images in poor lighting conditions, and the S20 Ultra can shift dynamically between a 108-megapixel mode and a 12-megapixel mode. 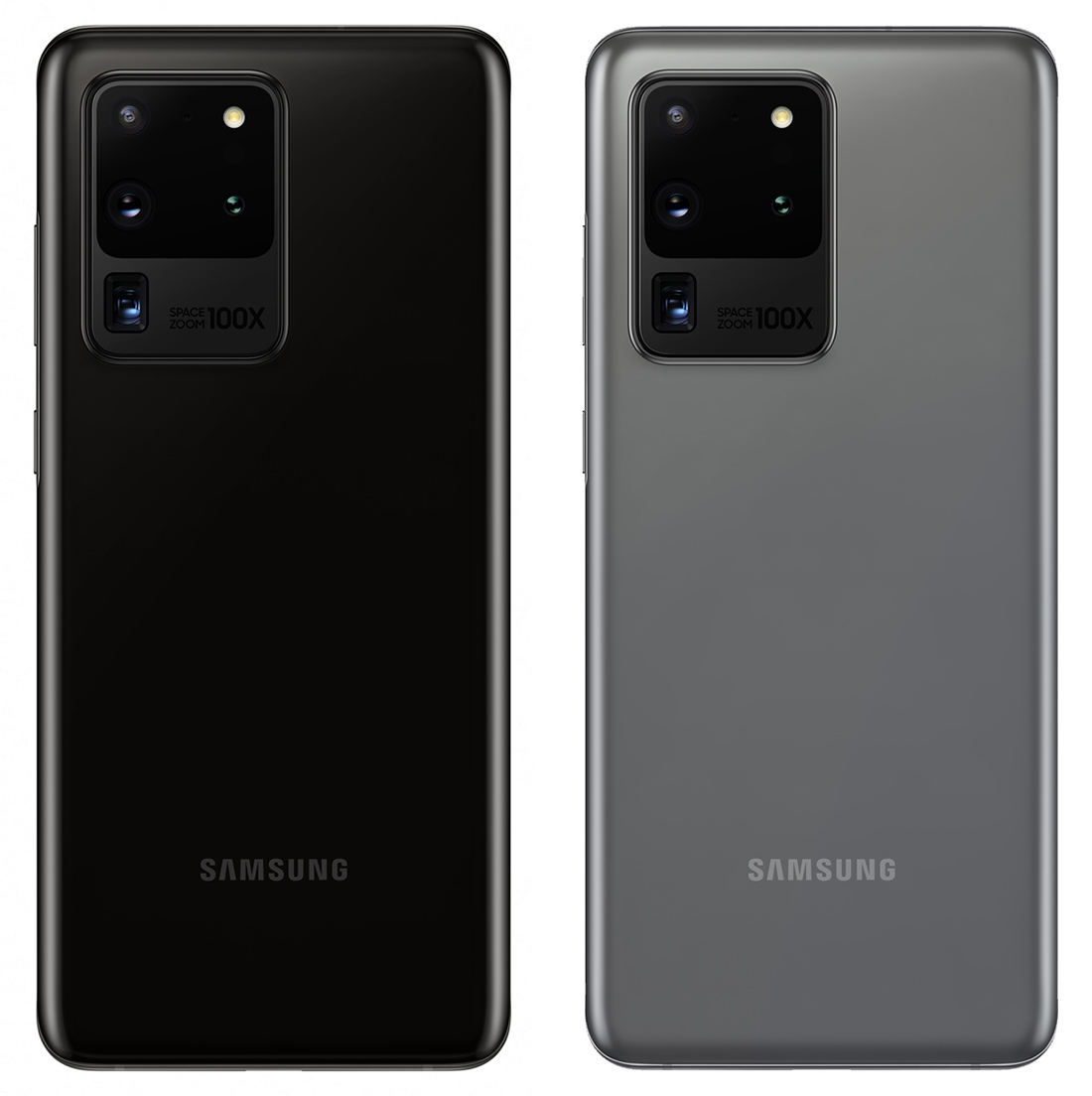 Galaxy S20 Ultra Cameras​
All three smartphones feature "Space Zoom" that allows users to zoom in up to 30x on the Galaxy S20 and S20+, while the S20 Ultra has 10x lossless zoom for a total of 100x zoom.

A "Single Take" feature lets the Galaxy S20 smartphones take a number of photos and videos at once, like live focus, cropped, ultra wide, and more, and then use AI to recommend the best shot of the bunch.

The new smartphones support 8K video shooting with "Super Steady" and anti-rolling stabilization features. There are also 10-megapixel front-facing camera setups on each of the new smartphones. 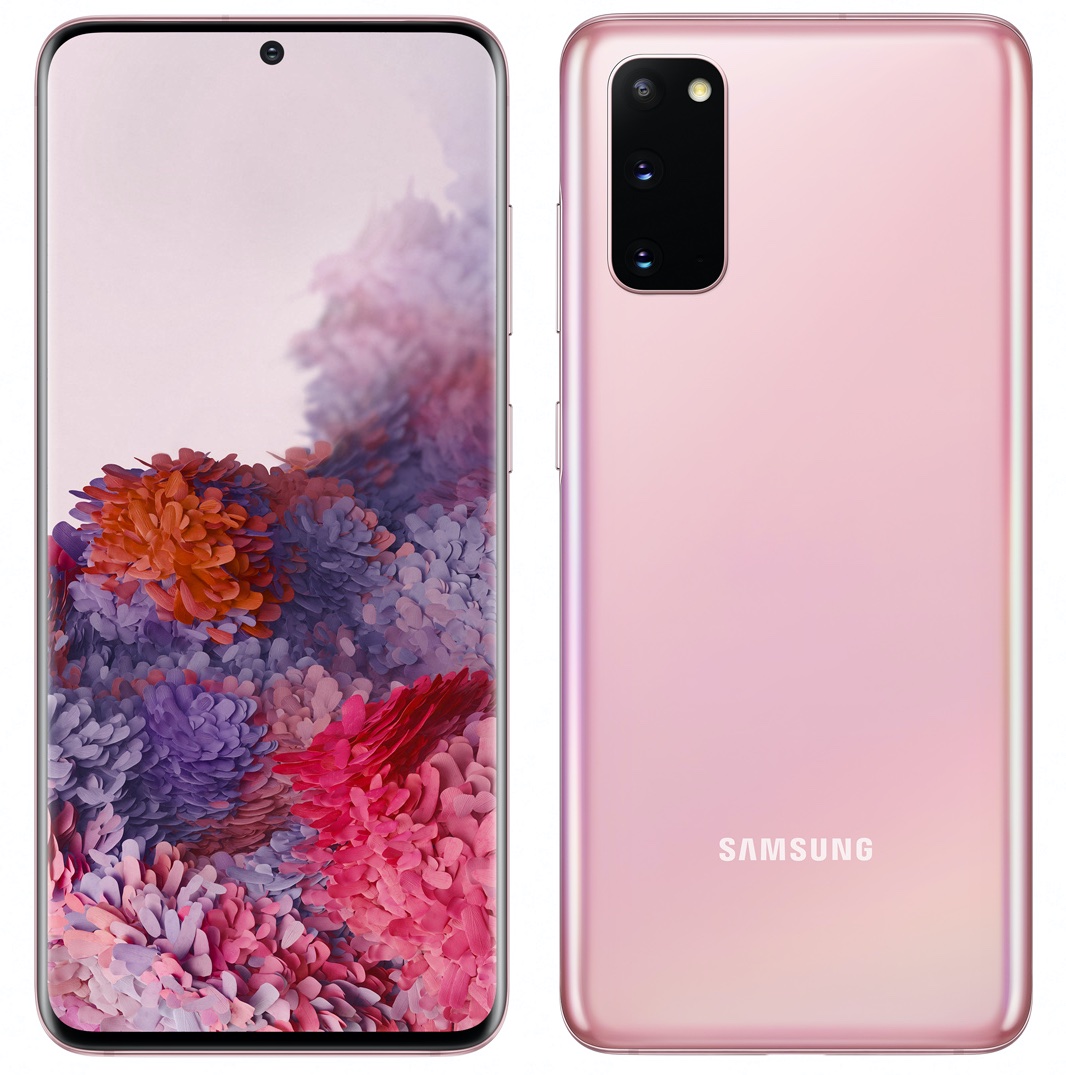 Samsung Galaxy S20​
All of the new smartphones are powered by a 7-nanometer 64-bit Octa-Core processor. The S20 and S20+ offer 12GB RAM, while the S20 Ultra offers 12 or 16GB depending on the model purchased. Storage starts at 128GB, but a 512GB option is available for the higher-end devices. 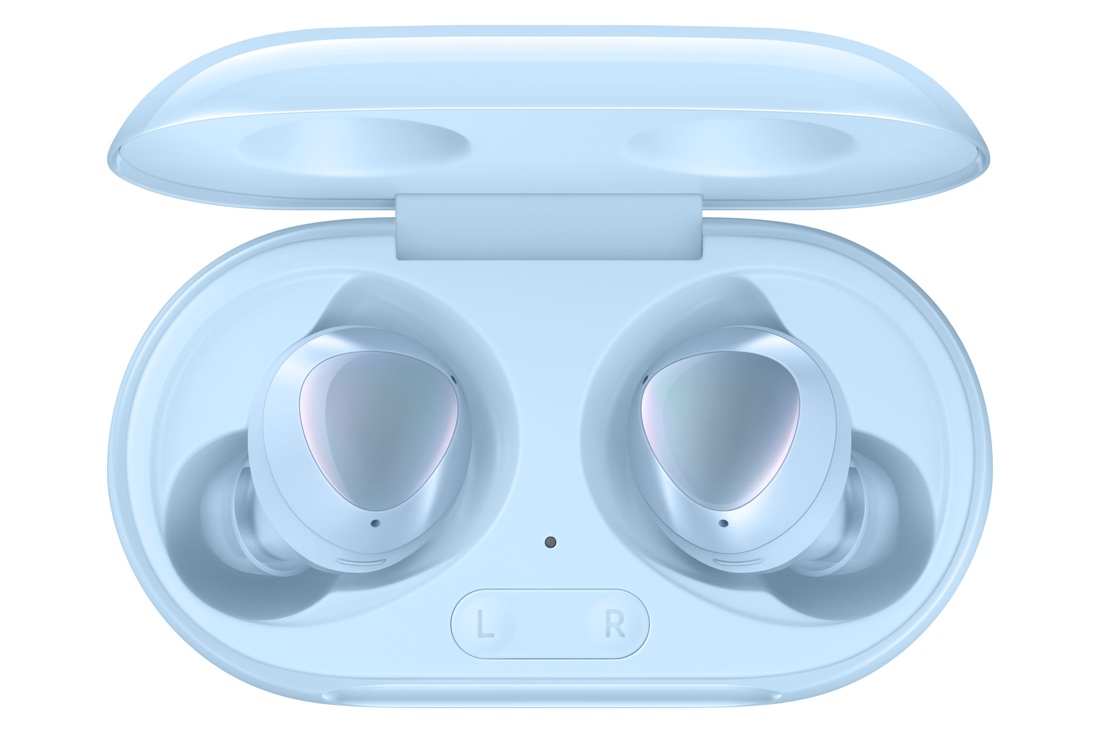 The Galaxy Buds+ are Samsung's latest AirPods competitor, featuring a two-way speaker for improved sound, three microphones, longer 11-hour battery life, and improved connectivity. MacRumors videographer Dan is attending Samsung's Unpacked event and Samsung is allowing members of the media to test out the devices after the announcements are finished, so we'll have a hands-on video coming later today featuring the Galaxy Z Flip and the new Galaxy S20 smartphones.

Anyone want to complain about your iPhone bump?
Reactions: Kram Sacul, leoshaun, cb3 and 19 others
L

It's missing a few cameras.
Reactions: Kram Sacul, TheWatchfulOne, brandonboo20 and 13 others

This Samsung looks absolutely horrible. Is this sarcasm?
Reactions: Kram Sacul, deltakilo_, WWPD and 65 others

I bet the ultra version will be criticized because of that camera zoom. Now people will spy on others with that distance shown on the stage
Reactions: subi257

Except that it does. This is the same sensor used by Xiaomi, and it already beat the iPhone 11 Pro in a comparison made by Marques Brownlee.

This is Samsung's implementation, which I guess will be better. Anyway the phone selectively adjust and decides the Megapixel count depending on the light conditions, it will not always try to use the 108 MPx sensor. It has a 12 MPx for low light situations.

You can also zoom optically to crazy levels (up to 100x), that is very Pro my friend. It has focused definition, meaning it can decide to select parts of your image, focus on it and make it look sharper. Instead of accusing this phone of gimmicky, Apple should see what the competition is doing and try to deliver much more.
Last edited: Feb 11, 2020
Reactions: deltakilo_, PrincePoppycock, arkitect and 30 others

They bragged that the live stream was being streamed from the S20.. but the stream looked like trash when i opened it. Which part is making the iPhone look outdated? I dont need that MASSIVE bump on the back of my iPhone.
Reactions: Kram Sacul, Wide opeN, philosoraptor1 and 6 others
F

look at all those people that said the iPhone's camera was ugly but haven't commented on the look of Samsung's camera
Reactions: Kram Sacul, FightTheFuture, Wide opeN and 23 others
S

Seems crazy Samsung continues ratcheting up the prices up as they compete with the Chinese mfrs who have significantly cheaper hardware.
Reactions: Huck, subway35, t1meless1nf1n1t and 3 others
W

If only we could merge Samsung hardware with Apple software.
Reactions: Kram Sacul, FlyBry, TropN and 24 others
S

Finally we have over 100 MP on a smartphone camera! The world has been waiting for that forever.
Reactions: mashdots, mdriftmeyer, Wide opeN and 6 others
T

Your move, Apple!
Reactions: arkitect, decypher44, koolmagicguy and 4 others
F

GeoStructural said:
Except that it does.
Click to expand...

no. no it doesn't. you're simply splitting the sensor into smaller chunks which means each pixel gets less light. this results in each pixel being less accurate.
Reactions: subi257, compwiz1202, GuruZac and 33 others
N

8K video recording? Most cable packages have barely any 4K content yet.
Reactions: GuruZac, whoknows2597, Huck and 5 others

that be me said:
Your move, Apple!
Click to expand...

I don't think even Apple is capable of making an uglier phone.
Reactions: Kram Sacul, iOS Geek, RedTheReader and 13 others

I liked it better when they had their cameras horizontally rather than vertical like Apple.
Reactions: Wide opeN and Dj64Mk7

I think there are rumors floating around the next high-end iPhones will have a 120 fps screen.
Reactions: nol2001
D

- Signed the guy who took the time to click on the comment section, log-in, then commented to let us know... He doesn't care.
Reactions: subi257, deltakilo_, PrincePoppycock and 21 others

farewelwilliams said:
look at all those people that said the iPhone's camera was ugly but haven't commented on the look of Samsung's camera
Click to expand...

They're both ugly.
Reactions: arkitect, snowboarder, Wide opeN and 5 others
F