I always was fascinated by every device Apple produced. Especially the devices produced in the mid 2000’s I do like. The design of the aluminium PowerBook G4 inspired every following MacBook (Pro) and was really state-of-the-art. Okay, they have some issues: the G4 PPC CPUs are well-known for overheating (it sounds already in idle like a starting plane) and caused damaged GPUs. The aluminum body was very delicate for bumps and scratches. And the upgrade possibilities were limited due to some limitations (as always at Apple devices).

So, last year I bought two PowerBook G4’s, buildt 2005, 12 inch, both had several issues. One had (and has) a broken graphics chip, the other one had several scratches, no AirPort and only the Combo Drive. So I thought “Why don’t make one out of two” and I began to tear down both PBs. Luckily the working one had also the 1,5 GHz G4. So now I had a fully working, good looking PowerBook G4 from 2005 with 1,5 GHz, 1.25GB RAM, a SuperDrive and AirPort Extreme card. As I buildt the working PowerBook up I put on new heat sink pads etc. so I can prevent everything from overheating. Now I have a fully good working PBG4 maxed out with everything possible, and several spare parts. 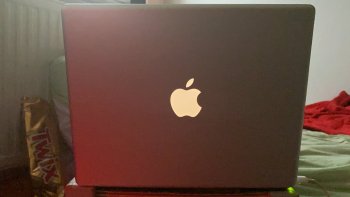 Next step was about the OS. I had really no experience with Apple Macs and so I needed to take a closer look at the whole thing. I already knew that the possibilities were limited, but Apple did everything to prevent us to easily use other systems than OS X. There was a project of Apple itself to develop a stable running Linux, but it was layed down very fast. Some nice Devs decided to look at the more common Linux builds and port them to work on Apple PPCs. But I also wanted to experience the original OS Apple intended for that device. I began with installing OS X 10.4 from the delivered discs. Everything worked out of the box, no things like nasty missing drivers etc. as I knew from Windows or Linux. Just some little things like updates and some programs like Office 2006 and the PowerBook was quite useable. But that wasn’t the real deal. Safari and iTunes were very outdated and only a few programs run on 10.4. So I looked in the WWW (using the PBG4) what OS X is the official maximum and saw it is 10.5.8. I wanted to burn an installer disc with 10.5 but had no DVD DL for it. I said to myself “how do you do it usually on PCs?” I got an idea: why don’t just use a USB drive? And here comes the hard part.

The PowerBook doesn’t support booting from USB from the original bootloader. But I found another way: the OpenFirmware. For the people who doesn’t know what that is: the OpenFirmware controls in the beginning the access to every device and initializes them, a bit like the BIOS on PCs. I found some interesting information on this site: https://web.archive.org/web/20191011132733/https://osxbook.com/book/bonus/ancient/whatismacosx/arch_boot.html
Disclaimer: neither I nor this site can be made reasonable for damages caused by modifications you made on the OpenFirmware. You can brick your device with several commands (because you can delete whole device trees and make your machine unbootable). But in general (when you don’t mess around with the antries and don’t write or delete anything) you don’t damage anything by using the OpenFirmware. Important info: some OldWorld-Macs have an uncomplete version of the OpenFirmware and may produce some errors (which won’t hurt the device or brick it). Now let’s continue with the boot procedure. At first we need to boot into the OpenFirmware. That can be done by the following key combination: hold ALT+option+O+F and then press the power button. You will hear the typical chime and you will see after some seconds a completely white screen with some text, this is the OpenFirmware. 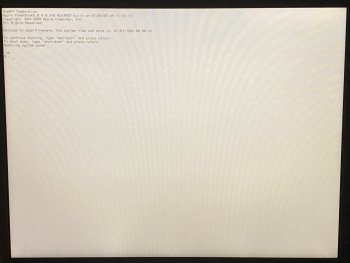 Now I will explain the boot procedure for OS X from Disc and from USB. Notice: not every USB drive will work. You will may need several tries to find a working drive. So at first put in a disc or a USB drive formatted in HFS+, HFS, UFS or ext2 with a OS X installer on it. Additionally you can boot over network via TFTP. So when you use a disc it is pretty simple. Use the following command to boot from disc: [boot cd:,\\:tbxi] Even burned OS X discs will work! If you want to boot from an USB drive it is a little bit more complex, but not too heavy. At first insert an USB Stick and start up the Mac as written above. Then type into the command line [dev / ls] and press enter. It will show up every device entry and will ask to continue the output. Press space and let show every entry until you see something similar to USB@1 or USB@1b. Under one of these entries you must see something like disk@1. If you don’t see this entry try again with another port and/or another USB drive. When you finally see an entry like shown above note down the USB one and the disk one. For this example I will use USB@1b and disk@1. Next step is to create an alias which makes the access easier. To do that type in [devalias ud /pci@f2000000/usb@1b/disk@1] and press enter. To check the success type in [dir ud:, \] and press enter. Now you should see the file entries of the root of your USB drive. If you don’t see that check every step until now and also check the file system of the USB drive. Remember: only HFS+, HFS, UFS or ext2 are supported, no FAT etc… Now let’s boot the OSX installer. This can be done by typing in the following and press enter: [boot ud:,\System\Library\CoreServices\BootX] Now it should boot the installer and you can proceed with the installation process.

Even though not many people now that but there are Linux distributions running on those PPC Macs, like Debian or even Ubuntu. For this example I will use Lubuntu 16.04 LTS. It gets updates from time to time and is quite stable. I don’t exactly know why but to boot this on the go you need to have this burned to a CD/DVD, it won’t boot from USB, just says “no boot image found”. So we need to boot from the disc you just burned with the following command: [boot cd:,\install\yaboot] Now it should boot into Lubuntu and run from USB, but not that fast. And it also is read-only. But you easily can install it to the HDD by using the Installer icon placed on the desktop. Notice: you CAN dual boot it with OSX, but for this OSX needs installed first. When you proceed to install Lubuntu to your Mac it will recognize the already installed OSX and ask you if you want to dual boot both. Choose your favorite option and proceed with the installation. After the installation the Mac will reboot and you will see something new: a new bootloader, really basic. 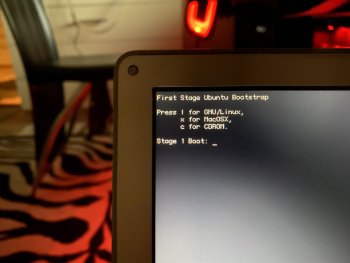 It asks you to press a button to choose which OS you want to boot, L for Linux, X for OSX and C for CD/DVD. If you choose OSX as your option you will see the already known grey Apple Logo on white background and everything will boot as known before. If you choose to boot Linux press after that enter once and something will happen: while booting you will see some commands from the OpenFirmware running some commands to initialize some devices like the GPU. Then Lubuntu will boot. Hint for those who use iBook G4s and PowerBook G4s: WiFi won’t run out of the box. To get this running, connect via LAN (or if you use the integrated modem first set it up, in some countries still usual to use) to the WWW, open a terminal and type in: [sudo apt-get install b43-fwcutter firmware-b43-installer] After that reboot the Mac and then WiFi should work. Some general tips: Check for updates after installation and check again from time to time. For G5 Macs there are even newer versions of Ubuntu and its derivates in 64 bit for PPC. But because I poorly don’t have a G5 I cannot test it. I hope this little post will help you in using your old PowerPC Mac some more time. Just to let you notice: there is at the moment a project getting the 10.6 Snow Leopard Beta running on those old Macs, stay tuned in ->this<- forum for further information! And here is a guide on setting up programs etc.: https://forums.macrumors.com/threads/for-new-users-the-starter-thread.2059173/ 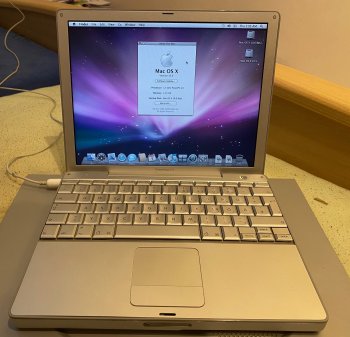 At the end of this little tutorial I would really appreciate if you would participate on the little poll I created. Thanks!

Looks great! Only two things, I’d make this a wiki so others can adjust it in time. And maybe format the text a bit? Walls of texts can be difficult to read
Reactions: theANY

Good idea, I needa work a bit with this forum so I get every function I can use. And I already thought about the text format. Thanks for your opinion👍
You must log in or register to reply here.
Share:
Facebook Twitter Reddit Email Share Link
Register on MacRumors! This sidebar will go away, and you'll see fewer ads.
Sign Up
Top Bottom