It appears that there is an issue with the App Store, as some iPhone users who have updated have found themselves unable to install apps. MacRumors has received several reports from people who are running into an issue that seems to be caused by an updated Terms and Conditions page. 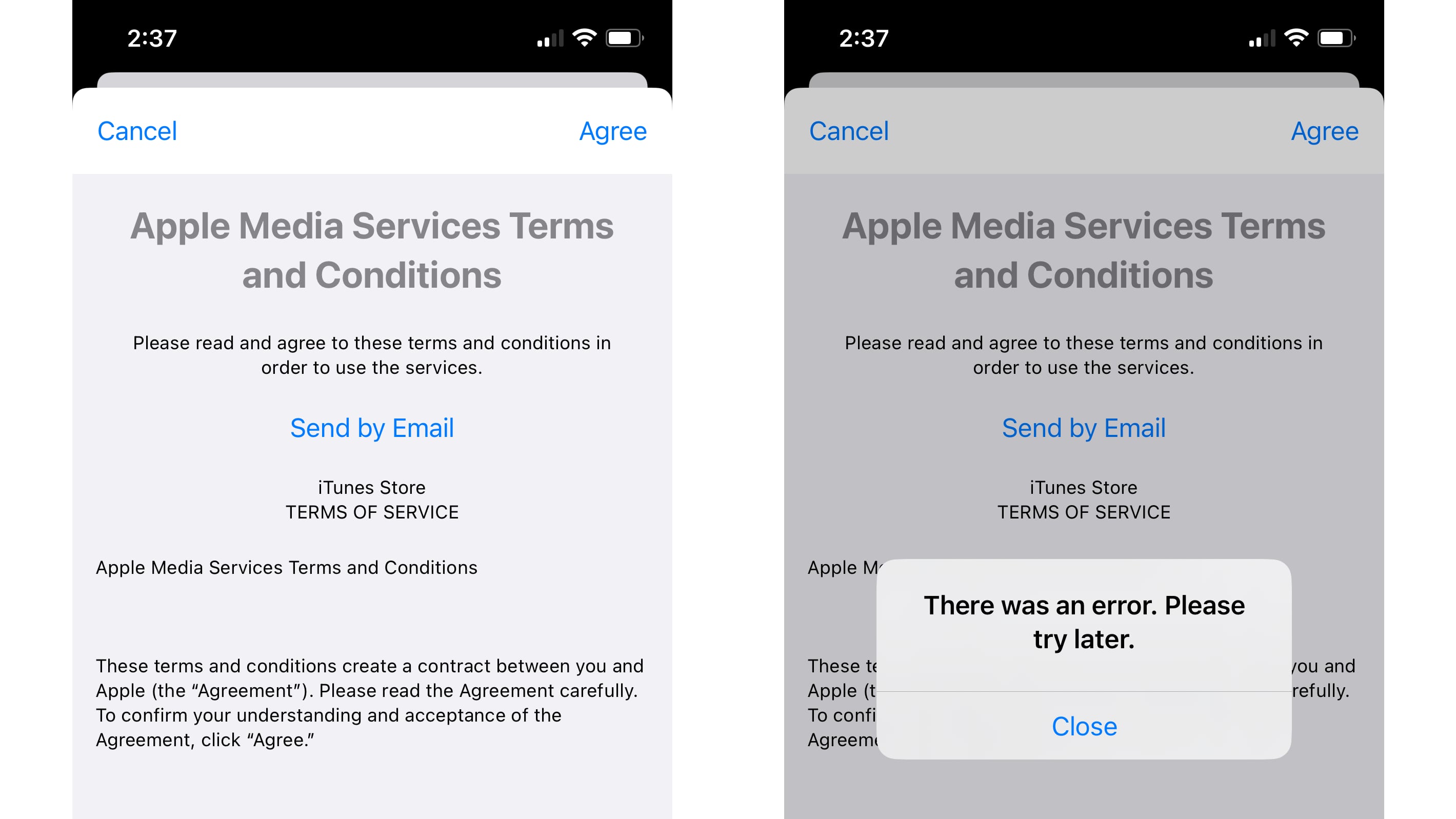 After installing iOS 16, attempting an app update directs affected users to a new Terms and Conditions page. When accepting the Terms and Conditions, it loads momentarily and then pops up an error alert. "There was an error. Please try later," reads the notification.

Apple's servers may be having problems at the current time, which is likely what's leading to the error message. There is no word yet on when the problem will be fixed, and it does not appear to be affecting all users.

Most people who are running into issues have installed iOS 16, but it may also be impacting some people who are still running iOS 15 or who have updated to iOS 15.7 or iPadOS 15.7.

Update: Apple has fixed the problem and apps are now able to be downloaded.

Even before the update.
Reactions: jamesrick80, decypher44, darthgreen and 4 others
T

Oh good it’s not just me.
Reactions: Babygotfont, raybo, robotica and 3 others

Looks like iOS 16 beta 2 will be released soon.
Reactions: ylihao, SqlInjection and raybo

Can’t update my apps either
Reactions: darthgreen and max2

Happening with 15.7 and 16 here
Reactions: viktorhun, decypher44, Windoes and 2 others
F

Yeah I get this on my iPhone running iOS 16 and my iPad running 15.7.
Reactions: max2 and Brad7

Did all the rebooting tricks. Nothing worked.
Reactions: Babygotfont, max2 and Brad7
T

Nothing to do with iOS 16. The same error is also in Mac App Store
Reactions: Brad7, max2 and jjm3
M

dohspc said:
Even before the update.
Click to expand...

Yep your 100% right.
Reactions: Babygotfont, Brad7, jprmercado and 1 other person

I’m guessing it’s a server thing because I’m running into this problem, and I haven’t even updated yet. [I see that the last part of the article acknowledges this.]
Reactions: max2
M

titan4 said:
Nothing to do with iOS 16. The same error is also in Mac App Store
Click to expand...

No issues here. Just updated a bunch of apps.
Reactions: mjs916 and krspkbl

Before publishing this article you saw many saying it’s not a iOS 16 issue, it’s also on iPads and phones on iOS 15 as well. Stop trying to bait the readers and post the facts
Reactions: strongy, decypher44, bbfc and 4 others
P

Same for me. The Apple server are under heavy load, watchOS 9 now lasts 2 hours to download.
Reactions: strongy, Brad7 and max2

Im getting the error without updating. Still on 15.6.1
Reactions: Brad7 and max2
M

Not just on iOS, I have the same problem on macOS.
Reactions: arkzrlo, Brad7 and max2
M

Having the same issue on both iOS and Apple App Store.
Reactions: Brad7 and max2
I

signed out of AppleID and back in, phone reboot, nothing works...Affects iPad OS update also.

Same here. On 15.6.1 and I updated 2 apps after reading the article. Wanted to see if I was having the problem but I am not.
I