A growing number of MacRumors readers and Twitter users have been experiencing an issue with some Mac App Store apps displaying a "damaged" error when opened since late Wednesday. The issue has affected popular apps such as 1Password, Acorn, Byword, DaisyDisk and Tweetbot. 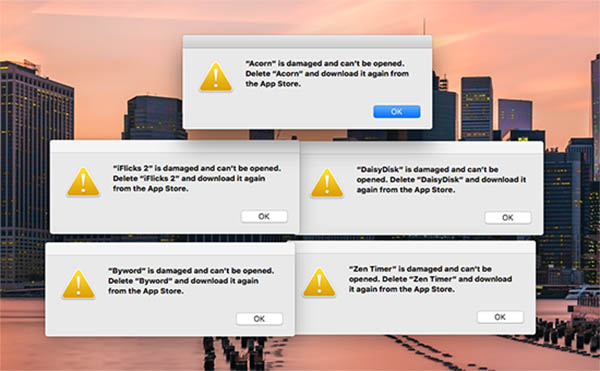 "App Name" is damaged and can't be opened. Delete "App Name" and download it again from the App Store.
Click to expand...

Tweetbot developer Paul Haddad tweeted that the issue appears to be related to security certificates that expired on November 11, 2015, and he further speculated that the receipts now using SHA256 encryption may be causing problems with older OS X versions.

Haddad says that rebooting your Mac on OS X 10.10 or later may resolve the issue, while some users have been forced to reinstall apps from the Mac App Store, disconnect from and reopen the Mac App Store or simply reenter their Apple ID password.

It appears that Apple has since set a new 2035 expiration date for the security certificates, per The Guardian, at least some for apps, but the issues are persisting for some. Apple did not respond to request for comment.

Update: Rene Ritchie at iMore has further explained what's causing Mac apps to report as "damaged" and what can be done about it.

The problem with corrupted apps has been with the MAS for me since day one. I have the idea downloaders aren't validated, so corruption that occurs isn't fixed by the MAS, but you need to entirely redownload things.

Had this problem with iFlicks 2, Reeder 3, Tweetbot, Checkbook Pro, some MAS Games, Art Text 2, White Noise, Movist. Kind of not at all funny. Deleting and re-downloading worked for all but Checkbook Pro. In a few cases I lost my preferences and settings.

Edit: (If you are having the same trouble as I am with Checkbook Pro contact Splasm software (support@splasm.com) and they will provide instructions on getting a non-MAS version to get you up and running in the meantime.)
Reactions: V.K., BlueParadox and rhoydotp

Now, this is embarrassing.
Reactions: d656, V.K., Sandstorm and 5 others

Not good to put all your eggs in one basket.
Reactions: Glassed Silver, NMBob and rhoydotp

Happened to me with Sketch 3. I'm on the latest El Capitan.

Had this issue with Tweetbot, though it simply asked for the Apple ID username and password.
Reactions: lars666 and Oblivious.Robot

I've been using OS X since the very day it came out and I haven't EVER seen this before. I thought it might have been related to doing a Migration Assistant because I did that last week to my new iMac.
Reactions: d656

Happened to me with Tweetbot on 10.11 and 10.9. Signing in again fixed it on 10.11, but nothing could make it work again on 10.9. If Haddad's tweet is correct, they might've killed App Store apps for 10.9 indefinitely, unless they go back and make an old cert just for it. Which won't happen, knowing Apple.

Same here. Running El Capitan. Last night I had two apps show up "damaged", and I reinstalled to fix. This morning I had 4 more, and logged out of the App Store and back in to fix. Annoying.
Reactions: BlueParadox
A

I can't start iTunes. The problem started yesterday. Nice to know it's not something I did wrong

BeSweeet said:
Had this issue with Tweetbot, though it simply asked for the Apple ID username and password.
Click to expand...

Same here, 1Password suddenly asked for Apple ID username and password as "it was purchased on another computer". Ehr... ok... why now? Been updating 1Password for quite some years on this laptop.

With DaisyDisk I do get that "is damaged" error. I can wait if this resolves itself. But I use 1Password *very* often, should be perfectly reliable.

b.inazawa-fan said:
Happened to me with Tweetbot on 10.11 and 10.9. Signing in again fixed it on 10.11, but nothing could make it work again on 10.9. If Haddad's tweet is correct, they might've killed App Store apps for 10.9 indefinitely, unless they go back and make an old cert just for it. Which won't happen, knowing Apple.
Click to expand...

I'm also running Mavericks. Much more stable then these new crap OSes. Also faster and fewer bells and whistles. I don't like beta software on production machines. El Capitan is beta quality.
Reactions: mojolicious, ardent73, Thermonuclear and 2 others
B

Happened to me with Piezo. Just thought something corrupted.
J

I'm not sure if this is related but right after turning the Macbook on, I couldn't open any apps!

Was worried that I might have been hacked or some other paranoia, didn't sign in through the pop up window but instead signed in through App Store, sort of fixed whatever it was.

We must be running different versions of El Capitan, because for me it's been rock solid.
Reactions: rdlink

Last night, I was prompted to sign in to the App Store in order to use Tweetbot. This morning, same thing for ReadKit.

It only affects my iPhone...

My Nexus 6 and Moto X Pure continue to be the best smartphones I own.

If only Apple would improve their quality...ha..ha..ha....

Sorry iPhone Lovers..
I just had to bring up Android since the haters always do.


(relax it's just a bit of humor)
Reactions: SirCheese
2

zorinlynx said:
We must be running different versions of El Capitan, because for me it's been rock solid.
Click to expand...