Following the release of the Logitech Powershell and MOGA Ace Power, gaming peripheral company SteelSeries today announced its Stratus iOS 7 gaming controller. Unlike the other two controllers, the Stratus is a completely wireless accessory that connects through Bluetooth instead of using the Lightning port on an iOS device. 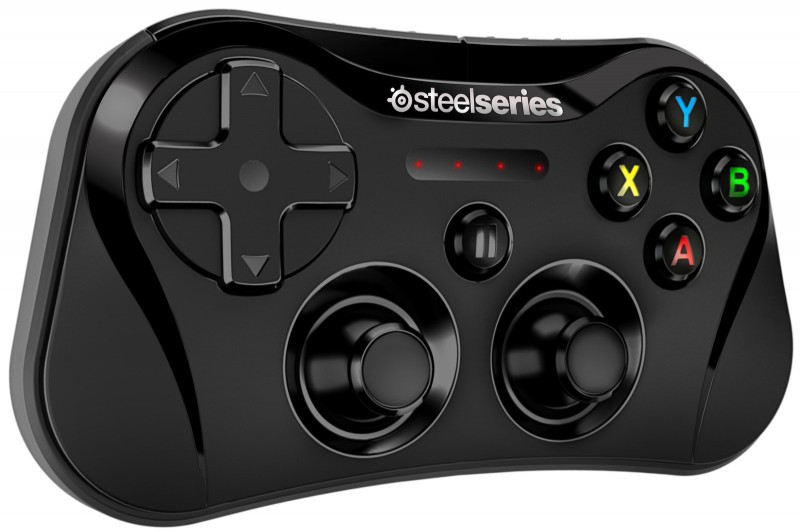 Featuring console-style controls such as a directional pad, two analog sticks and four pressure sensitive face buttons, the Stratus' Bluetooth capabilities allows connectivity for up to four controllers. The device also includes a protective cover that doubles as an extended grip.

Our sister site TouchArcade had the opportunity to spend some extended time with the SteelSeries Stratus, and has provided a detailed review outlining the strengths and weaknesses of the controller. While the device was given high marks for being useable with any iOS 7 device and an impressive battery life of over ten hours, criticisms centered around the high price tag and the comfort issues that the controller's small design creates. Despite those criticisms, TouchArcade stated that the SteelSeries Stratus is "without a doubt the best controller out there."

Another positive aspect of the SteelSeries Stratus was its ability to work well with Apple's Lighting Digital AV Adapter while gaming:

Also, obviously, this begins to open the door to the strange new world that is treating your iPhone like a portable game console hooked up to your TV. You could technically do this with the Moga Ace Power and Logitech Powershell, but it required beaming your video output via AirPlay, which arguably is the least ideal of all possible solutions given the significant amounts of nearly unplayable lag AirPlay introduces. Wiring your iPhone or iPad direct to your TV via the Lightning Digital AV Adapter significantly mitigates this.
Click to expand...

Currently, games such as Dead Trigger 2, Asphalt 8: Airborne, and Bastion offer controller support, with additional developers pledging to build controller support into their apps now that the hardware is available to consumers.

The SteelSeries Stratus sells for $99.99 and is available now for pre-orders.

Where do these companies come up with the $99 price tag? This offers even lass than the Mogu, which at least has a battery to extend the usage of your phone. Lets all hold off for the cheap chinese knockoffs.
Comment
W

Looks good, but it is way too expensive.
Aren't the new PS4 controllers half this price?

I'm going to be waiting a while longer I think..
Comment

Oh yes, this one I like. USB charging is exactly what I want. Plus it's not a stupid case.

Will wait for it to pop up on Amazon.

One thing though... How many games on iOS are multiplayer? And how long would the battery last considering you have two wireless headsets and controllers hooked up?
Comment
W

This seems lame without apps on the AppleTV.

Do they seriously expect two people to sit in front of an ipad for hours playing games? Not going to happen.
Comment
C

Yes this is exactly what the iOS controller should be and yes to Steel Series! Big No on the price. I somehow think they will have to revise that for any kind of sales though. Its blatant that they are taking advantage here.

Just noted that there isn't any shoulder buttons!!!! Arrrrrghhhh! It looked too good to be true!
Last edited: Jan 6, 2014
Comment
Z

I do not understand the price tag of all these new iOS controllers. $99.99 is just ridiculous. There is no market for that.
Comment
D

When will companies understand nobody wants wireless game controllers for their iPhones and iPads. It's stupid. And at this pricetag.....
Comment

Precisely what we need for iOS to become a household name in console gaming. I've been waiting for something like this since Airplay made its debut, and hopefully controllers like this will tempt more than just a handful of games into taking advantage of Airplay, Apple TV, and MFi. Price though... 4 player multiplayer just requires a further investment of $400 on top of the cost of the Apple TV and the iOS device. Maybe I'm out of touch, but I would have thought that this would price the SteelSeries controllers out of reach of most of their potential buyers in the casual gaming market. I wish companies would learn from previous flops like Gameloft's controller fiasco.
Comment
T

Is Apple's licensing programme this ludicrously expensive or are these companies just dumb? Either way, someone needs to get the cost down to literally half this with something competently designed.
Comment
E

There has to be a jailbreak app in the works that can use the same MFI protocol to get standard Bluetooth controllers (Moga?) to work.
Comment

Now this is what I'm talking about! I'm not into the clamshell controllers (though I can definitely appreciate their place in the market), but since I use cases on my iOS devices, this is what I've been waiting for.

I have the old version

I have the Steel Series Free and it works very well as a controller when playing emulators on my mac.

Bought mine on sale for about $14. Totally worth it

This new one seems to be the exact same controller but with color on the buttons.
Comment
D

A bit high price but at least they got the wireless part right instead of a useless "put iphone in"-controller.
Comment

osx11 said:
This seems lame without apps on the AppleTV.

Do they seriously expect two people to sit in front of an ipad for hours playing games? Not going to happen.
Click to expand...

"Do they seriously expect people to sit in front of a phone/tablet for hours playing games? Not going to happen." -

Seriously. App's on an iOS ATV or type media device included, or evolved from an Apple TV set, is a 'When', rather than as 'If'.

Also, I could see two people playing on a 12" iPad... Sometimes it is not always practical to play games on the main set of any given environment. You can also keep an eye on your kids and do not need them to be locked away in another room etc.
Comment

Am I the only one surprised that there's no shoulder triggers?

Also, I'd like an option to hook up my iPhone to it... You need two hands to hold the controller, then an extra one to hold the iPhone...
Comment

dumastudetto said:
When will companies understand nobody wants wireless game controllers for their iPhones and iPads. It's stupid. And at this pricetag.....
Click to expand...

I want one but wouldn't pay more than $30.
Comment

irnchriz said:
Where do these companies come up with the $99 price tag? This offers even lass than the Mogu, which at least has a battery to extend the usage of your phone. Lets all hold off for the cheap chinese knockoffs.
Click to expand...

Being first to market, they can just offer silly price points and some people will pay for it. As soon as Logitech and its ilk jump on and flood the market, they'll release the 'Stratus +' at half the price.

Still waiting for the ATV to make this a genuinely useful product though ... come on, Apple!
Comment

Does it work with osx Mavericks too?

No shoulder buttons and price kills it for me unfortunately.
Comment
J

Does anyone know how to preorder? Every article I've read says you can, but their website only says Coming Soon...?
Comment

It is dead on arrival at that price.

So many additional variables mean it is awful -

Where do these companies think their market is exactly?
Comment
C

irnchriz said:
Where do these companies come up with the $99 price tag? This offers even lass than the Mogu, which at least has a battery to extend the usage of your phone. Lets all hold off for the cheap chinese knockoffs.
Click to expand...

Isn't this the same website that brags that iOS users spend more money than their Android counterparts? Not one bit surprised that these companies are taking advantage of the situation.


Ashin said:
It is dead on arrival at that price.

So many additional variables mean it is awful -

Where do these companies think their market is exactly?
Click to expand...