Earlier today, we highlighted how a number of new third-party systemwide keyboard for iOS 8 are topping the App Store charts, with SwiftKey Keyboard [Direct Link] displacing Facebook Messenger from the top spot on the free iPhone app chart in the United States.

Moving beyond the charts to look at raw download numbers, the success of these new keyboards is even more clear, with SwiftKey telling MacRumors that its iOS 8 keyboard has just passed one million downloads in less than 24 hours.

SwiftKey saw a brief launch delay yesterday due to App Store processing, and thus it did not go live until around noon Pacific Time, meaning that it has reached the milestone in roughly 22 hours.

SwiftKey is certainly benefiting from its positioning as a free app compared to competitors such as Swype and Fleksy, but it offers users a good opportunity to try out an alternative to Apple's default keyboard. SwiftKey will continue to upgrade its keyboard over time, no doubt at some point adding in premium features to generate income for the company.

"Who needs alternative keyboards? Lol Android customization is so useless"
-Any iOS zealot 6 months ago
B

Swiftkey was THE only thing I missed from my 'droid days

I paid 2.99 for a copy of Swiftkey on my Android phone...I haven't regretted it.
D

Found out after I installed on my iPad Air that the swipe typing is only for iPhone and iPod. Bummer, but I did install Swype on the iPad and it works with swipe typing.

HOWEVER, its quirky. If I'm using the Swype keyboard and I put focus on a password field on a webpage, the keyboard reverts back to the stock Apple keyboard with no button to switch back to Swype.
B

And it sucks deleted it instantly. No question mark on the main keyboard? smh

Worst part about this keyboard, is that it requires full access for word prediction... which means the keyboard is no longer sandboxed. 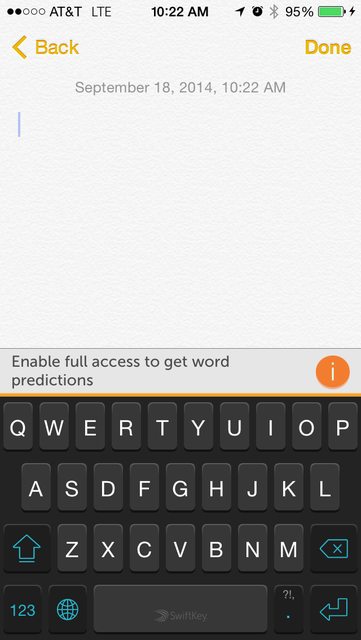 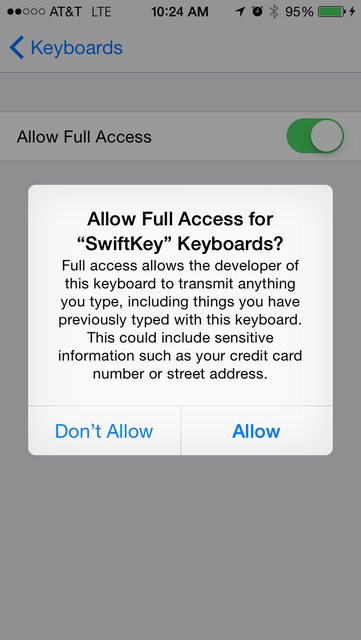 This keyboard is also completely free, which begs the question how are they making money. They are probably data-minning the words we type. Like Apple said we are its product.
Last edited: Sep 18, 2014

What don't you like? It's my favorite so far, easily. Swype isn't bad either though. I just want quicker access to emoticons!

Maybe Apple should take the hint that customers want customization?

Usually I'm an Apple purist and don't like a lot of third-party stuff, but this one looks almost the same as the standard keyboard with different colors, so naturally, it's "gorgeous". Except, is it possible to change the color of the letters?
M

It will be even better when the bugs are worked out. So far, the inability to use it when quickly replying from the lock screen and the fact that the messages don't scroll up when the keyboard opens in the messaging app have really bothered me.
J

There are still a few problems with SwiftKey. For example... if you type the incorrect word, you should just be able to tap the word & suggestions will appear rather than it 'doubling up' the words. Also - using SwiftKey in certain apps (such as Messages) results in scrolling issues. It scrolls half way up the conversation rather than going to the bottom.

I don't really. At least not too much. One of the reasons I like Apple stuff is I like the way they design stuff, and don't feel the need to change it. (for the most part)

That being said, I do like a dark themed keyboard vs white.
C

emvath said:
I paid 2.99 for a copy of Swiftkey on my Android phone...I haven't regretted it.
Click to expand...

At the moment SwiftKey only provides the basic idea of the app, but all the other features are missing. At least for now.

gpat said:
"Who needs alternative keyboards? Lol Android customization is so useless"
-Any iOS zealot 6 months ago
Click to expand...

"Now that ios has what Android has, I'm throwing a fit"
-Any Android zealot today

It's very lacking compared to the Android version. I went with Fleksy instead because I can make it small. I love the gestures too.
P

i would never install a 3rd party keyboard, especially one that wants full access.

bobright said:
And it sucks deleted it instantly. No question mark on the main keyboard? smh
Click to expand...

What are you talking about? Just swipe right on the button in the bottom right corner that has the ?!, and that'll give you a question mark.

I'm surprised no one is talking about the lack of the Siri Dictation button. For me, that's an absolute deal breaker.

I agree with what others have said. The bugs need to be worked out. When this happens, SwiftKey will be great. I have to be honest and say that I am really enjoying the iOS 8 keyboard. The QuickType is a welcome change for now.
D

Not surprised one bit, I deleted the apple keyboard and left just the emoji keyboard, its fantastic, one thing I always missed during my times using android
You must log in or register to reply here.
Share:
Facebook Twitter Reddit Email Share Link
Register on MacRumors! This sidebar will go away, and you'll see fewer ads.
Sign Up
Top Bottom