The Virtuous Circle of Product Placement in Apple's TV+ Shows

Apple products are visible in an average of 32 camera shots in each episode of "The Morning Show," and an Apple logo is visible in roughly one-third of those shots, based on a tally count by The Wall Street Journal. 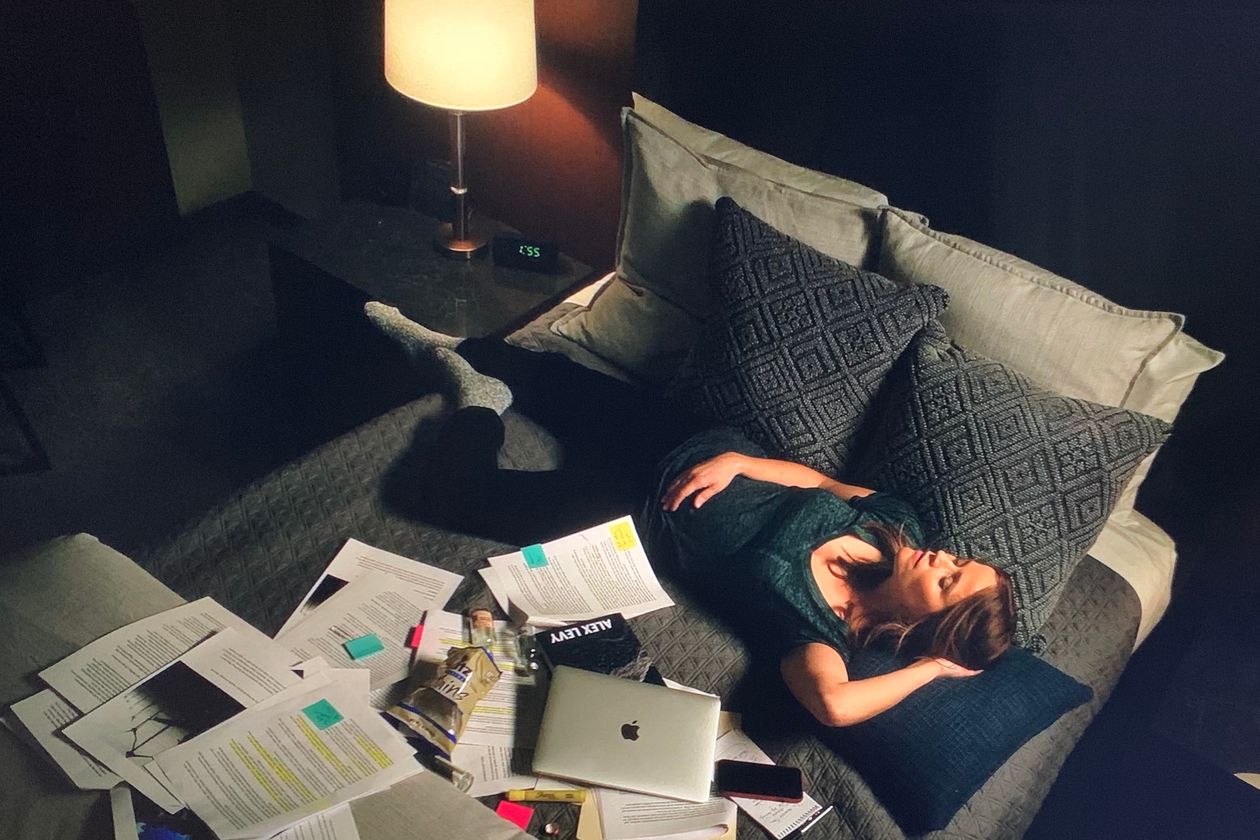 Reese Witherspoon's character sleeps beside her iPhone and MacBook in 'The Morning Show'​
In one four-second scene in episode one of the flagship Apple TV+ series, nine Apple products are shown as two characters walk and talk through a newsroom, according to WSJ's report.

As far as product placement goes, it's an impressive count for the newsroom drama, which debuted last week to a mixed critical reception but a generally favorable audience reaction, according to review aggregator Rotten Tomatoes.

"The Morning Show" stars Jennifer Aniston, Reese Witherspoon and Steve Carell, and reportedly costs more than $15 million per episode, but as a vehicle to push Apple's own products, it could be worth tens of millions of dollars. WSJ:

"The Morning Show" wastes little time giving Apple screen time. The first scene of the first episode opens with the character of executive producer Chip Black, played by Mark Duplass, sprawled on the floor of his office in the dark, feet away from a Mac computer, when the iPhone next to him lights up with an incoming call. About 20 seconds later, Steve Carell's soon-to-be-disgraced anchor, Mitch Kessler, is awakened by his iPhone. In total, there are 31 shots of Apple devices in Episode 1, including eight with the company's logo.
Click to expand...

Other Apple products that get decent screen time in the series include MacBooks and iMacs, iPads, and AirPods and Apple Watches. Even the HomePod speaker makes a cameo on a producer's office desk.

Spending on product placement has doubled since 2012 to about $10 billion, according to PQ Media, a media research firm that tracks the industry. However, Apple has said it doesn't pay for product placement, and people close to "The Morning Show" told WSJ that producers weren't under pressure to include Apple products in the shows.

Of course it helps that Apple products are very popular - the iPhone has a 35 percent share of the U.S. smartphone market - so it stands to reason that Apple products will appear in shows depicting modern life. Apple products often show up in other TV series not affiliated with Apple, too. But as WSJ notes, the iPhone appears in "The Morning Show" so much that it can seem like an appendage. 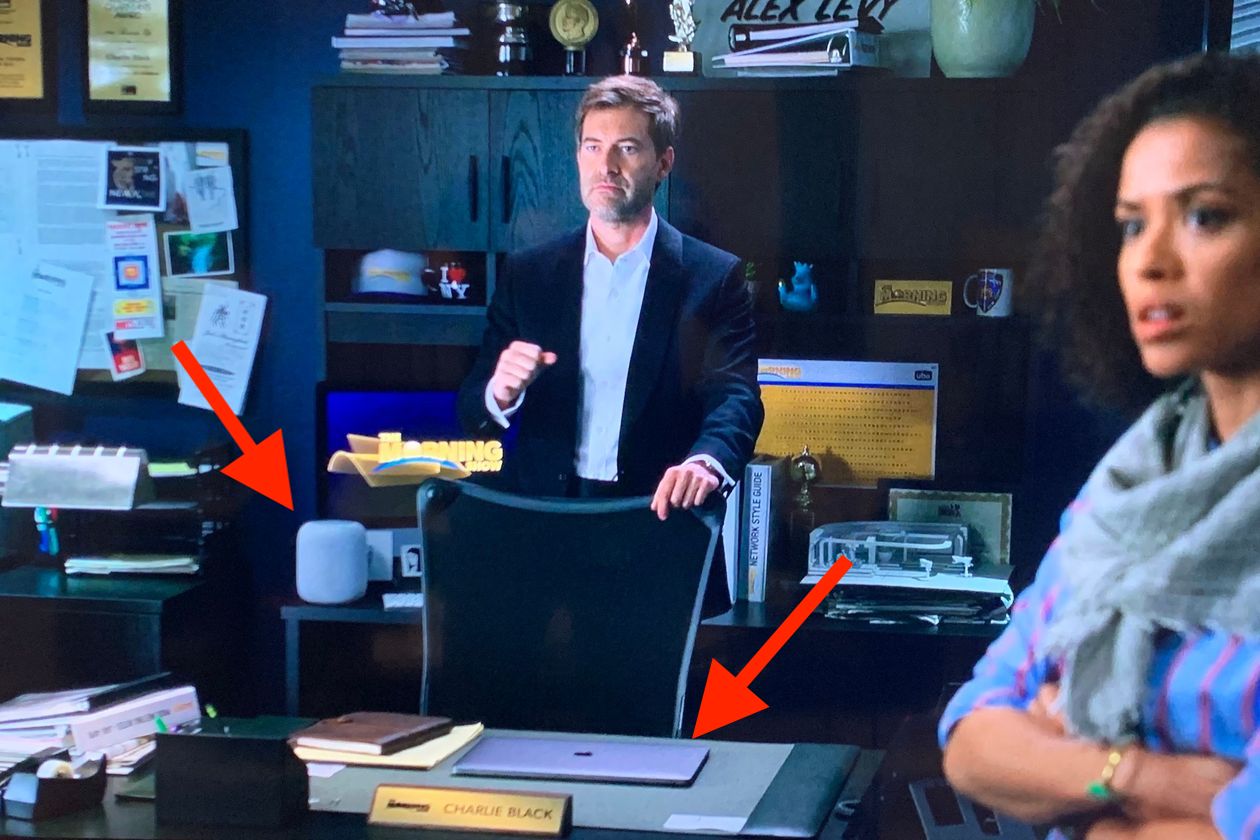 The office of 'The Morning Show' character Chip Black, played by actor Mark Duplass​
Some viewers may consider the flagship series to be overzealous in its product placement, but the very fact that Apple is able to promote its hardware in a subscription service that was designed to help lessen the company's dependency on its iPhone business at a time of slowing sales, is a sweet sort of irony. If the service is a success, it could well be a virtuous circle for Apple's long-term product revenues.

"In a changing world where people watch less traditional television, especially younger audiences, how do you reach them?" said Patrick Quinn, president of PQ Media. "One way to do that is to launch your own streaming service and show off your product. Not everyone can do that, but Apple can."
Click to expand...

Apple is providing customers with a free 7-day trial for ?Apple TV?+, which is priced at $4.99 per month or $49.99 per year. Apple is also offering all customers who purchased an ?Apple TV?, iPhone, iPad, Mac, or iPod touch after September 10 one free year of access to ?Apple TV?+.

Will the villains in the new shows use windows or android products?
Reactions: cbaca51, Wintermute121, Shanghaichica and 56 others

Subtle, or not so subtle advertising. I’ve noticed Apple products are shown in other shows as well.
Reactions: cbaca51, MAXAAPL, 15ngcs1 and 21 others

I7guy said:
Subtle, or not so subtle advertising. I’ve noticed Apple products are shown in other shows as well.
Click to expand...

As well as shows that have iMacs and MacBooks with a round sticker over the Apple logo on the back.
Reactions: dabotsonline, I7guy, AlexGraphicD and 19 others
R

Well, I'd assume rich tv personalities use macbooks, iphones and ipads anyway. It didn't strike me as out of place.
Reactions: cbaca51, MAXAAPL, 15ngcs1 and 19 others
U

Given that it's impossible to showcase Apple gadgets in "See", "Dickinson" and "For All Mankind", TMS must be the product placement fest!
Reactions: MAXAAPL, 15ngcs1, TracesOfArsenic and 16 others

Hmm, I haven’t seen any Apple products in For All Mankind. Wonder why that is?

I mean it would be weird for apple to buy computers from other brands for their tv shows, when they can provide these basically for free and even sell them afterwards as a refurb.
Reactions: MAXAAPL, 15ngcs1, dabotsonline and 10 others
I

The product placement in the first episode was downright a distraction like they weren’t even trying to be subtle about it.
Reactions: simonmet, 123, nickgovier and 7 others
I

Phone Junky said:
As well as shows that have iMacs and MacBooks with a round sticker over the Apple logo on the back.
Click to expand...

I’ve noticed that over here in the U.K. Can’t remember the programme but it was clearly an ‘old style’ MacBook Air.

RosOne said:
Well, I'd assume rich tv personalities use macbooks, iphones and ipads anyway. It didn't strike me as out of place.
Click to expand...

Really? First 3 minutes of The Morning Show you had 3 people waking up in the middle of the night and checking their iPhones. lol
Reactions: 15ngcs1, dabotsonline, AlexGraphicD and 3 others
G

Nozuka said:
I mean it would be weird for apple to buy computers from other brands for their tv shows, when they can provide these basically for free and even sell them afterwards as a refurb.
Click to expand...

There must be some kind of deal going on for ages. In so many TV shows and films, especially ones aimed at younger generation, they have iPhones, iPads, Mac going right and left.
Reactions: 15ngcs1, Stars&Stripes and EmotionalSnow
R

I do not see any problem in this. They (Apple) pay for the show, why should they marketing non Apple products ?
Reactions: tongxinshe, 15ngcs1, Boardiesboi and 12 others
A

I wonder if the EU is going to investigate them for anti-competitive issues.
Reactions: Cole Slaw, tongxinshe, Stars&Stripes and 15 others

Phone Junky said:
As well as shows that have iMacs and MacBooks with a round sticker over the Apple logo on the back.
Click to expand...

Those shows have not been paid by Apple for placement.

Not to mention the subliminal "Buy an Apple product" messages flashing on the screen...
Reactions: EmotionalSnow

I find it refreshing that they don’t have to cover up their own logo on their shows
Reactions: 15ngcs1, Kram Sacul, diandi and 5 others

The last thing I need in life is more TV shows that hold no significance what so ever.

thasan said:
Will the villains in the new shows use windows or android products?
Click to expand...

I suspect they'll also have names like Sam Sung or Mike Crowsoft...
Reactions: Shanghaichica, 15ngcs1, chilly willy and 13 others

iapplelove said:
The last thing I need in life is more TV shows that hold no significance what so ever.

Nope, but consumers will definitely ‘consume’ it like they do with Real Housewives of __________
Reactions: dabotsonline, AlexGraphicD, Dj64Mk7 and 2 others
K

People do actually use iPhones and MacBooks in real life

The HomePod one was just a complete joke though
Reactions: simonmet, 15ngcs1, martyjmclean and 5 others
P

thasan said:
Will the villains in the new shows use windows or android products?
Click to expand...

That’s actually what happened in one TV drama in Japan. The good guys and police all use iMacs and Mac Pros, while the bad guys use Windows laptops. The show did redeem itself, since the main protagonist always used Linux bootable flash drive even on his Mac.
Reactions: Hustler1337, 15ngcs1, dabotsonline and 4 others

PowerBook-G5 said:
Hmm, I haven’t seen any Apple products in For All Mankind. Wonder why that is?

They could jump ahead a few years and show the Apple II. That would actually be really cool.
Reactions: 15ngcs1, EmotionalSnow and hlfway2anywhere

gluckett said:
Ha, it's hilarious that the MacBooks are not even facing the correct direction for the people to be using them in the two pictures posted in the article. I know I always keep the backside of the computer facing me when it's sitting on my desk....
Click to expand...

You sure? The logo will be upright when the lid is open which means it faces away from you when closed and correctly placed for use.
Reactions: tongxinshe, 15ngcs1, fahlman and 19 others
You must log in or register to reply here.
Share:
Facebook Twitter Reddit Email Share Link
Register on MacRumors! This sidebar will go away, and you'll see fewer ads.
Sign Up
Top Bottom