Recently purchased a Nike+ Apple Watch S4 but wanted the Silver Aluminium casing, so the only option was the Platinum band.

I’ve purchased a 3rd party band (ATUP), but the silicone is extremely thin compared to the official bands and feels somewhat flimsy.

Does anyone own a 3rd party band similar to the Nike+ one below (in fact ideally in Black rather than Anthracite) which has a decent thickness to it like the official bands? 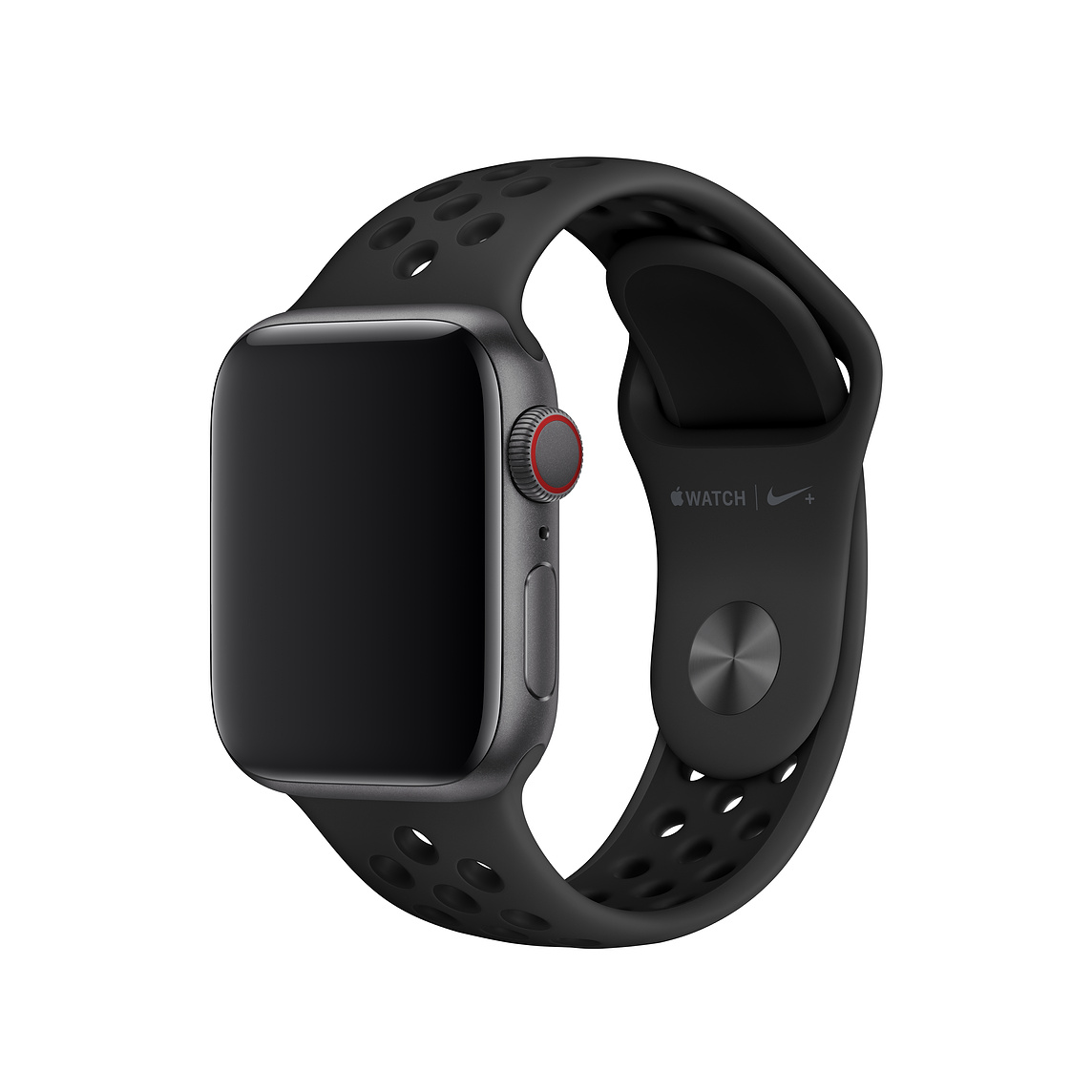 Haha, I've been saying this for the past four years, but it seemed like I was the only one who cared or noticed.

Every single third-party sport band I've tried (and I've tried bands from probably 5-10 makers) feels flimsy compared to the genuine bands. It's not only about thickness though - it's the material. Apple uses fluoroelastomer (synthetic rubber) whereas third-party makers typically use silicone. Fluoroelastomer is heavier, feels more substantial, and is (presumably) more expensive and/or difficult to work with. Third-party sport bands also have less space between the holes (actually, the same amount of space, but it looks more cramped because the secondary color is 2-3x thicker around each hole than on the OEM bands).

So, yeah. Third-party sport bands are ALWAYS flimsier than OEM bands. Whether the difference is worth it to you ($2 for a third-party sport band vs $50 for an OEM) is another story. For me, personally, it is. I try new colors with third-party bands first, and if I end up liking them, I always buy OEM. They just feel a lot better to me.
Last edited: Jun 23, 2019
Reactions: rosegoldoli, CarlJ, Complex757 and 1 other person
Comment

If you’ve already tried up to 10 bands, it’s not looking good for my quest to find a more rigid third-party version than the one I purchased.

Has anyone else had better luck out there and could recommend a good third-party one please?
Reactions: mavis
Comment

I'd be interested in hearing about this too. The thickness (actually, the rigidity of the bands) is always different on third-party sport bands, but also the spacing of the holes. It's hard to find a picture that shows this (most third-party manufacturers use Apple's official marketing pictures wherever possible) but occasionally you'll find a shot that shows the ACTUAL band, and then it's easy to spot the difference.

Here's a screenshot of my AW from this morning, in a frame I made from Apple's marketing materials for both the SS AW and the Nike Pure Platinum/White band. Notice the amount of platinum (gray) between the holes on the band: 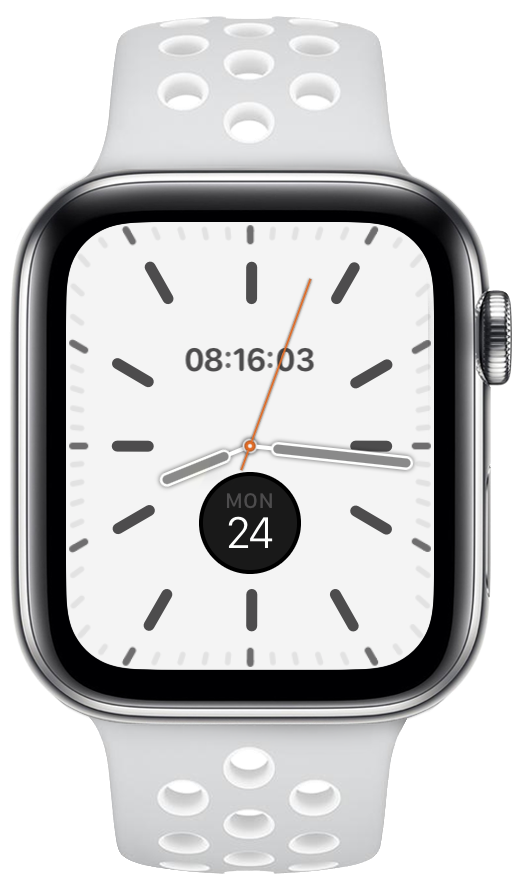 And here's a knockoff. Notice how there's much less gray between the holes, because the secondary color (the white) is much thicker, around each hole: 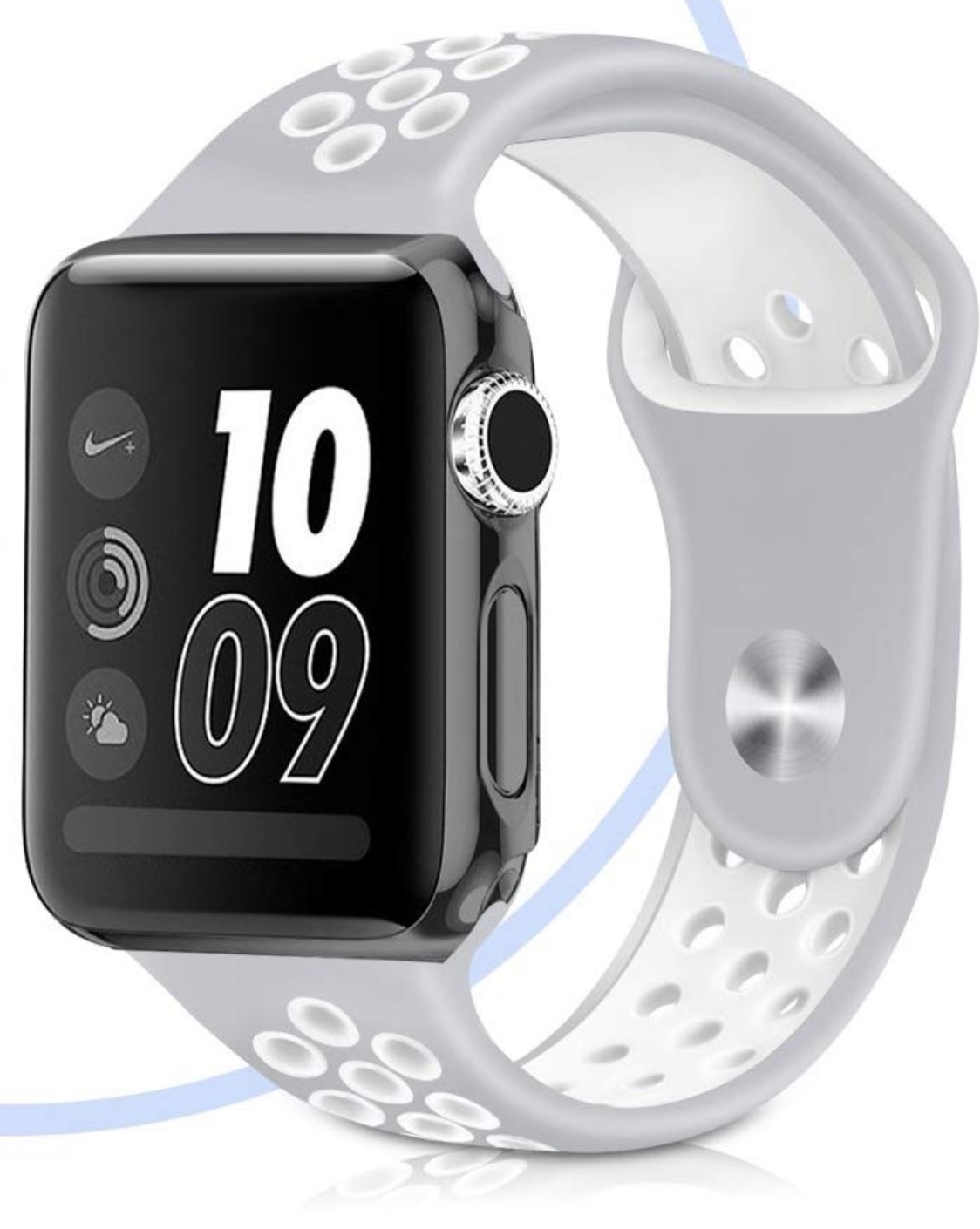 You've already noticed the feeling is different, but once you know what to look for, the visual appearance is a dead giveaway as well. Not to mention that the silicone bands' holes deform more than the OEM bands, when you wear them (the silicone is softer, so the holes stretch slightly, making them slightly elongated - oval, rather than round - when you wear the watch). The OEM bands do this too, but much less than the knockoffs.

So yeah - I'll keep an eye on this thread to see if anyone has found a decent third-party sport band!
Last edited: Jun 24, 2019
Reactions: Complex757 and KeanosMagicHat
Comment

This guy gets it . . . seems he noticed the same thing and made an honest video about it.

KeanosMagicHat said:
This guy gets it . . . seems he noticed the same thing and made an honest video about it.

Yeah, I mean, he was close. Although he seemed to think it was all due to the thickness of the band (it's not) and he didn't mention the visual differences (maybe he just didn't notice) ... Oh and he kept calling them "Amazon bands," which of course, they're not. In fact, if you're smart, you can get them for less than $2 each, direct from China (AliExpress, etc) rather than paying $10 through Amazon ... But he was on the right track, I suppose.
Comment

So I’ve ended up buying a used original Black/Volt band for 40% less than retail.

It was described as Mint condition, but I’d say Very Good is more accurate.

Gonna keep an eye out for Black/Hyper Grape and Black/Cool Gray.

Still interested in 3rd party bands that match the thickness of the Apple ones though if anyone on here stumbles across one.

Oh and if Apple ever released the Nike+ Sport Band in all Black, I may even stump up full price for that one!

KeanosMagicHat said:
So I’ve ended up buying a used original Black/Volt band for 40% less than retail.

It was described as Mint condition, but I’d say Very Good is more accurate.

Gonna keep an eye out for Black/Hyper Grape and Black/Cool Gray.

Still interested in 3rd party bands that match the thickness of the Apple ones though if anyone on here stumbles across one.

Oh and if Apple ever released the Nike+ Sport Band in all Black, I may even stump up full price for that one!

mavis said:
Just following up on this - any luck finding a decent third-party Nike Sport Band knock-off?
Click to expand...

They were all too flimsy. As above I opted to buy a nearly new original one for around 60% of the new cost.
Comment

my advice to you is stick to OEM. You can probably find this same band you want for less than $50 (and even with the black steel pin) on eBay or mercari. People are always selling these bands because they are common (not like seasonal and limited edition colors)
Comment

Has anyone tried the I-ccessories bands? Their silicone are 1/2 of Apple in price. They have a $50 milanese metal loop as well.
Last edited: Sep 3, 2019
Comment

anyone ever buy from these guys?

Chewie16 said:
anyone ever buy from these guys?

they claim their bands are fluoroelastomer
Click to expand...

I just bought one. So we will see...
Comment
C

I bought one too this week. I emailed them to find out if it is true fluoroelastomer and they said yes. I’ll keep you guys posted as well
Comment
L

Has anyone tried their sports loops? Just wondering if they’re any better than Urvoi ones from Aliexpress.
Comment
C

mikeb298 said:
When is yours expected?
Click to expand...

Good question. Mines been in pre-shipment for 2 days now. Been a week since I ordered. What the flip.
Comment
C

I just emailed the company about the shipping delay. This was their response:

“Your order was delayed due to the item being temporarily out of stock. It was shipped. We will reach out to USPS to see what the issue is on your behalf. Don’t worry”

Yes! I finally have a delivery date of the 27th.
Comment
C

I was checking them out earlier myself.

I noticed that their reviews for a different band showed the same background but the reviews were listed under different names.

It gave me pause.